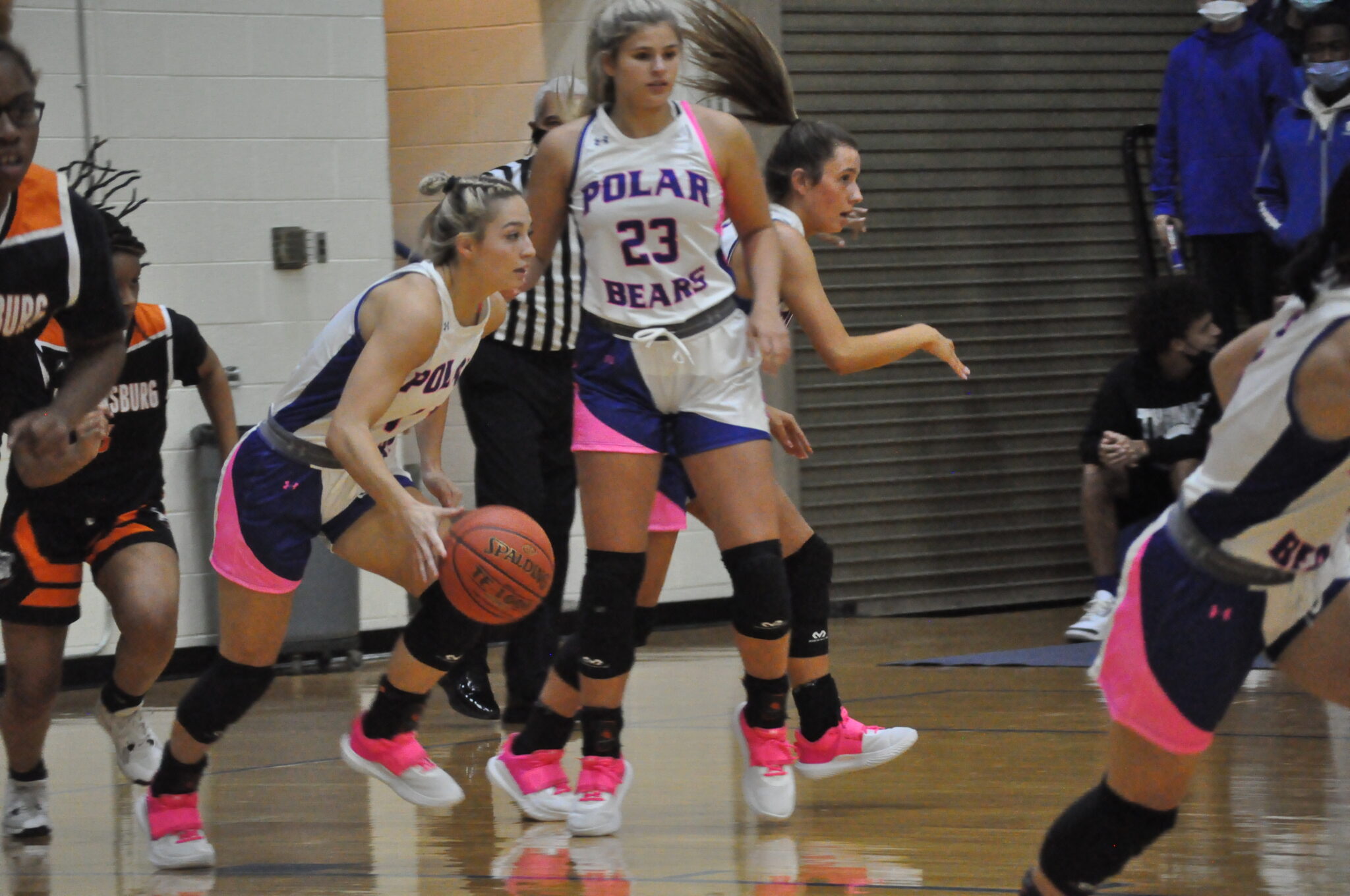 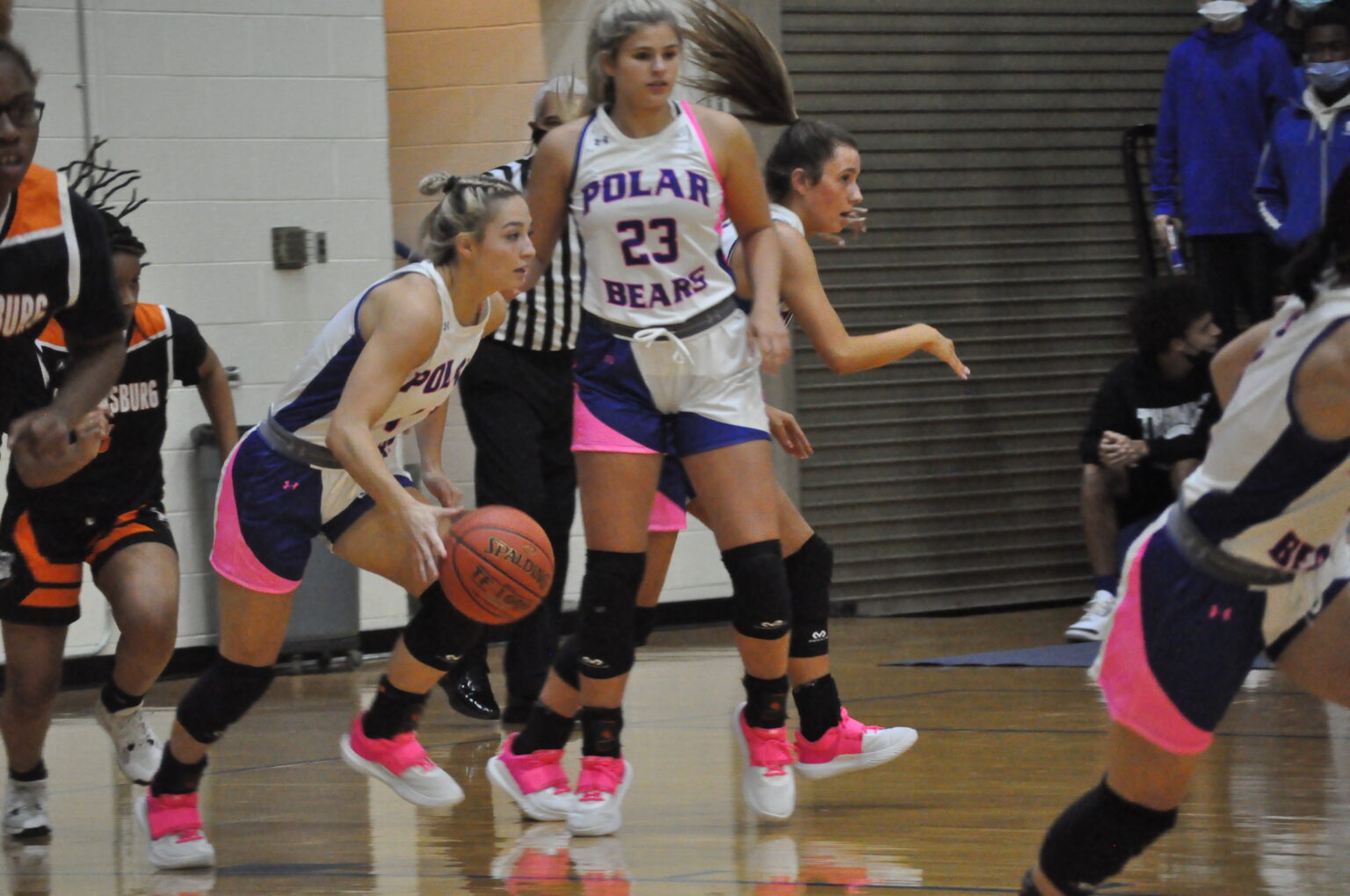 Fairmont Senior's Marley Washenitz looks to push the pace after coming up with one of her 12 steals. Photo by Greg Carey/WVMetroNews.com 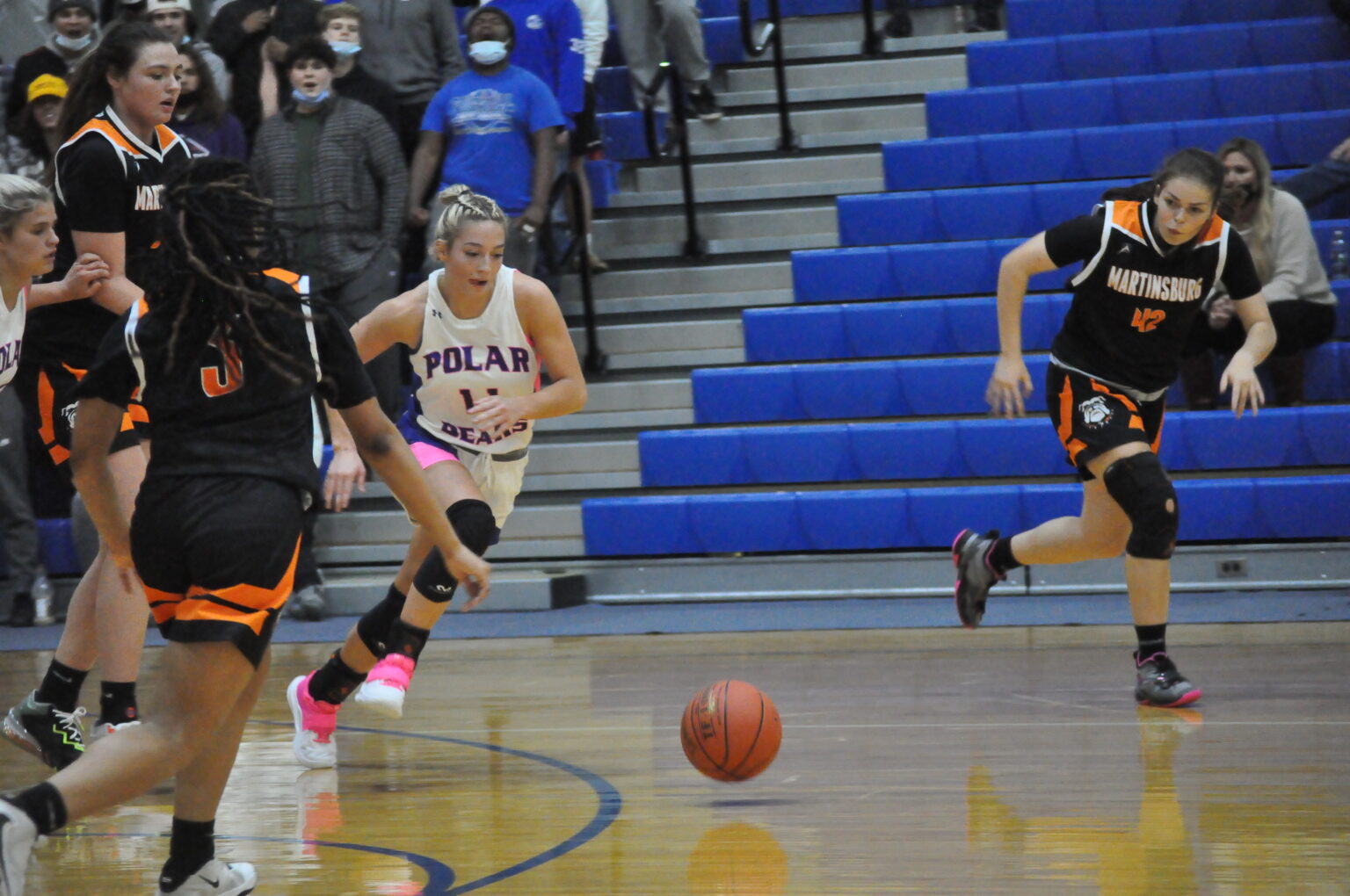 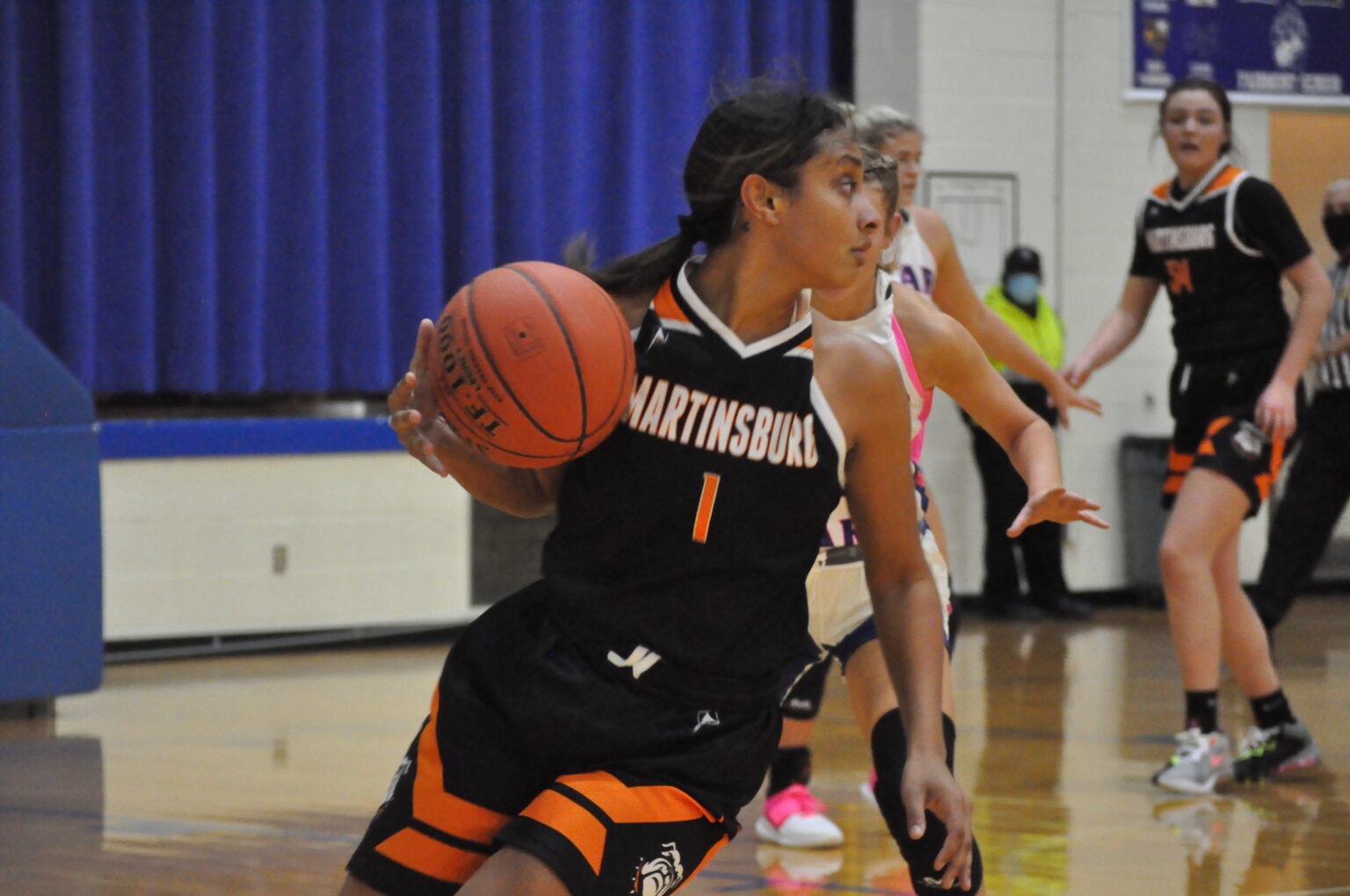 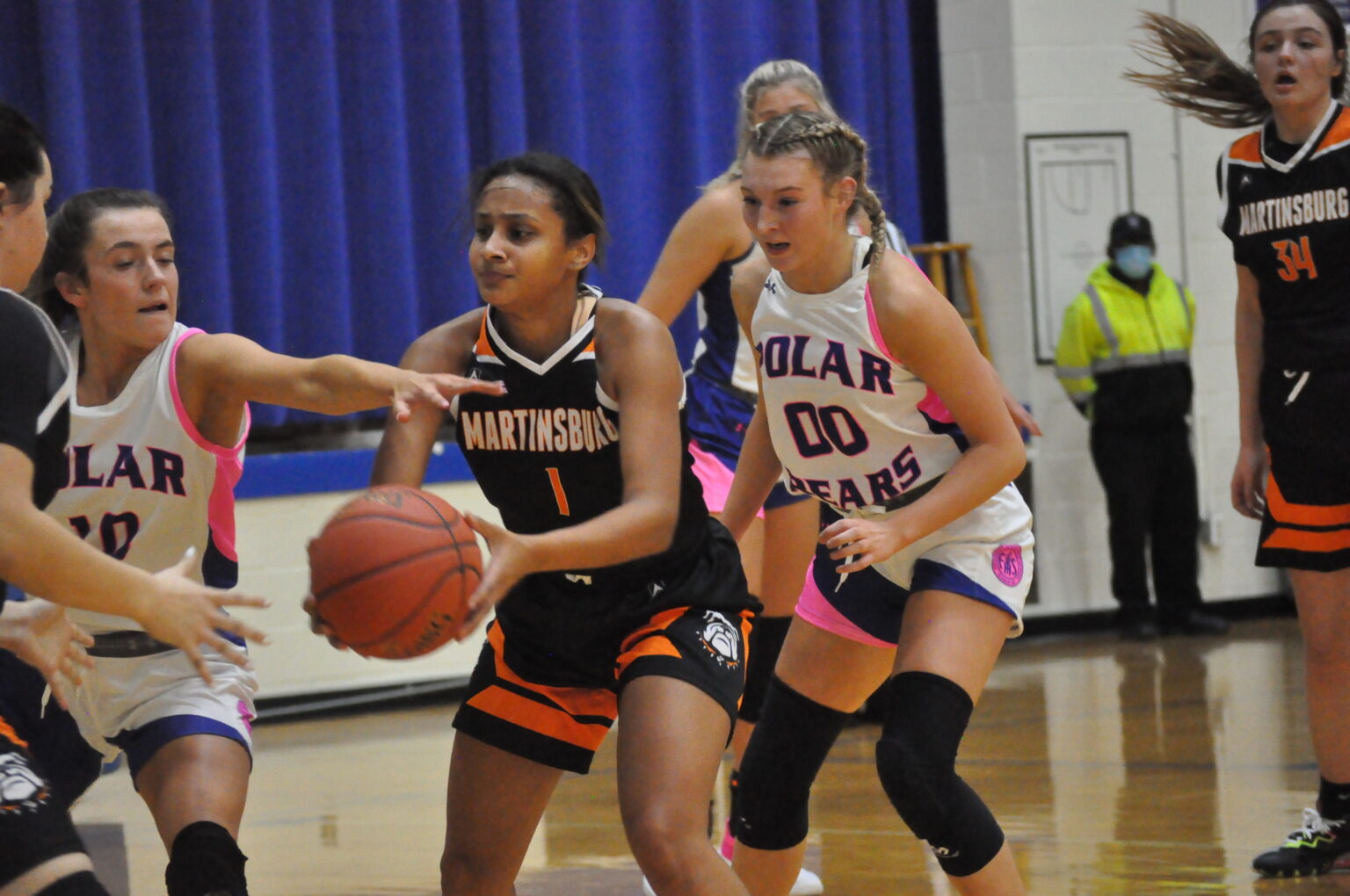 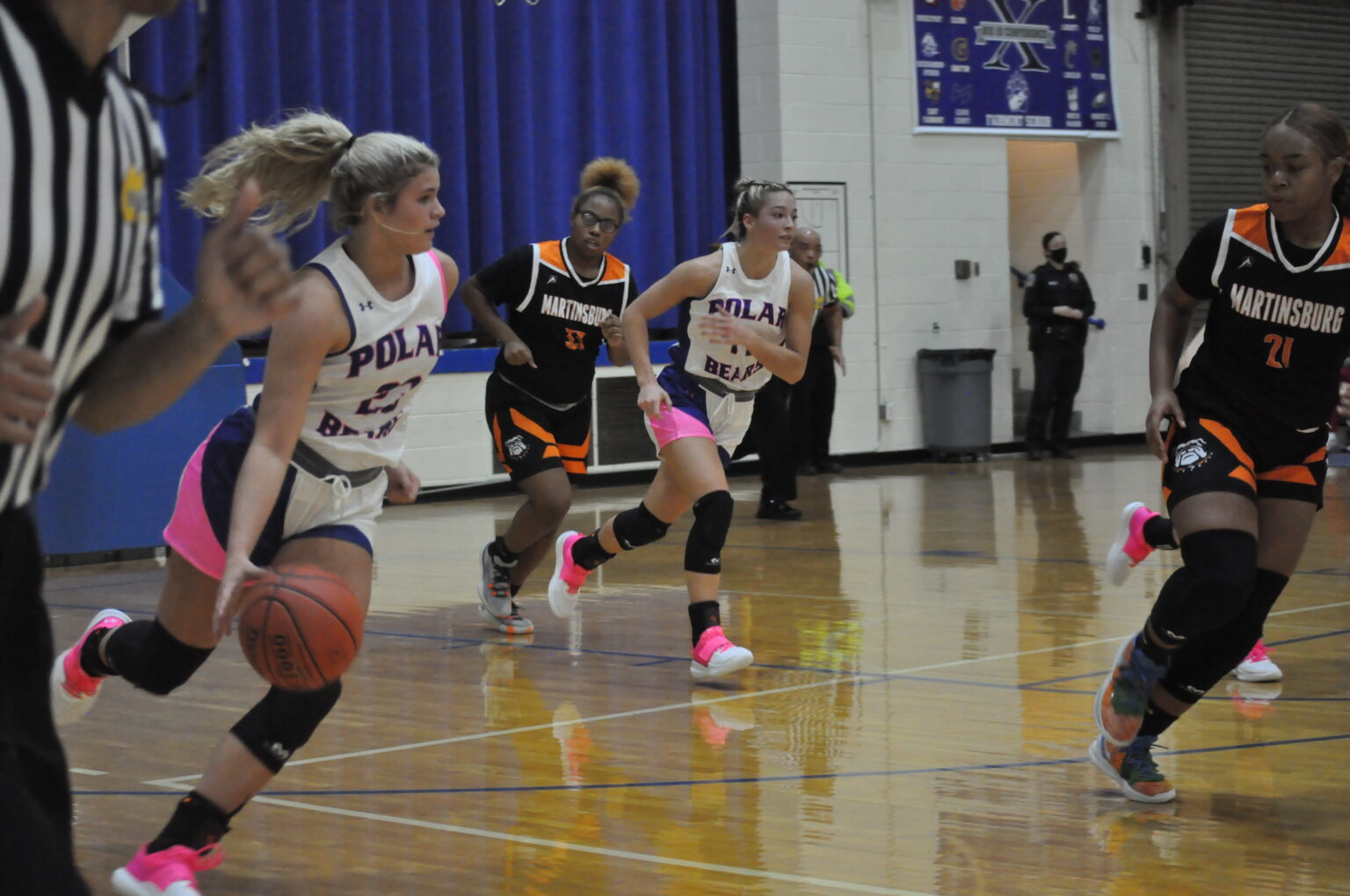 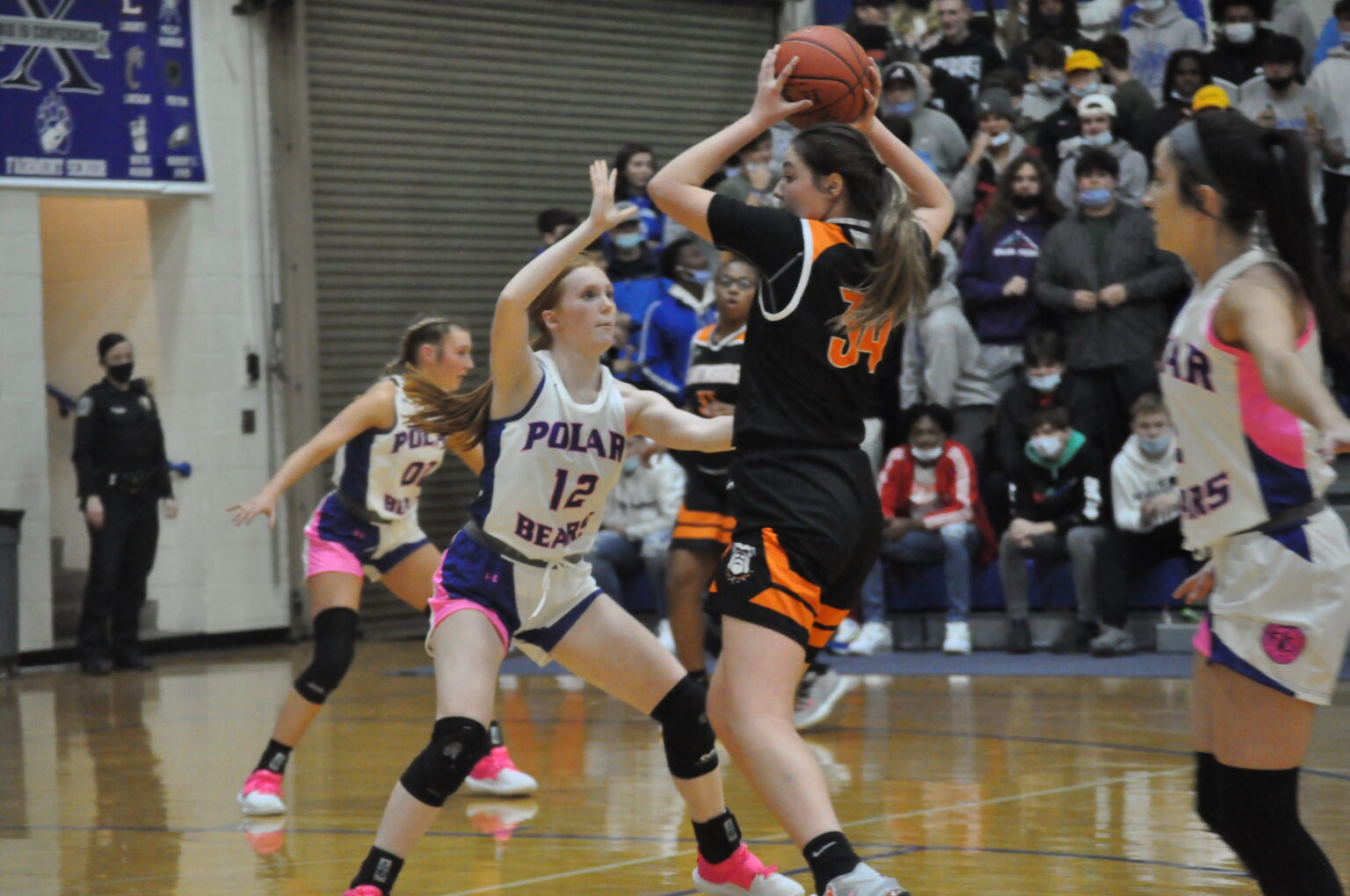 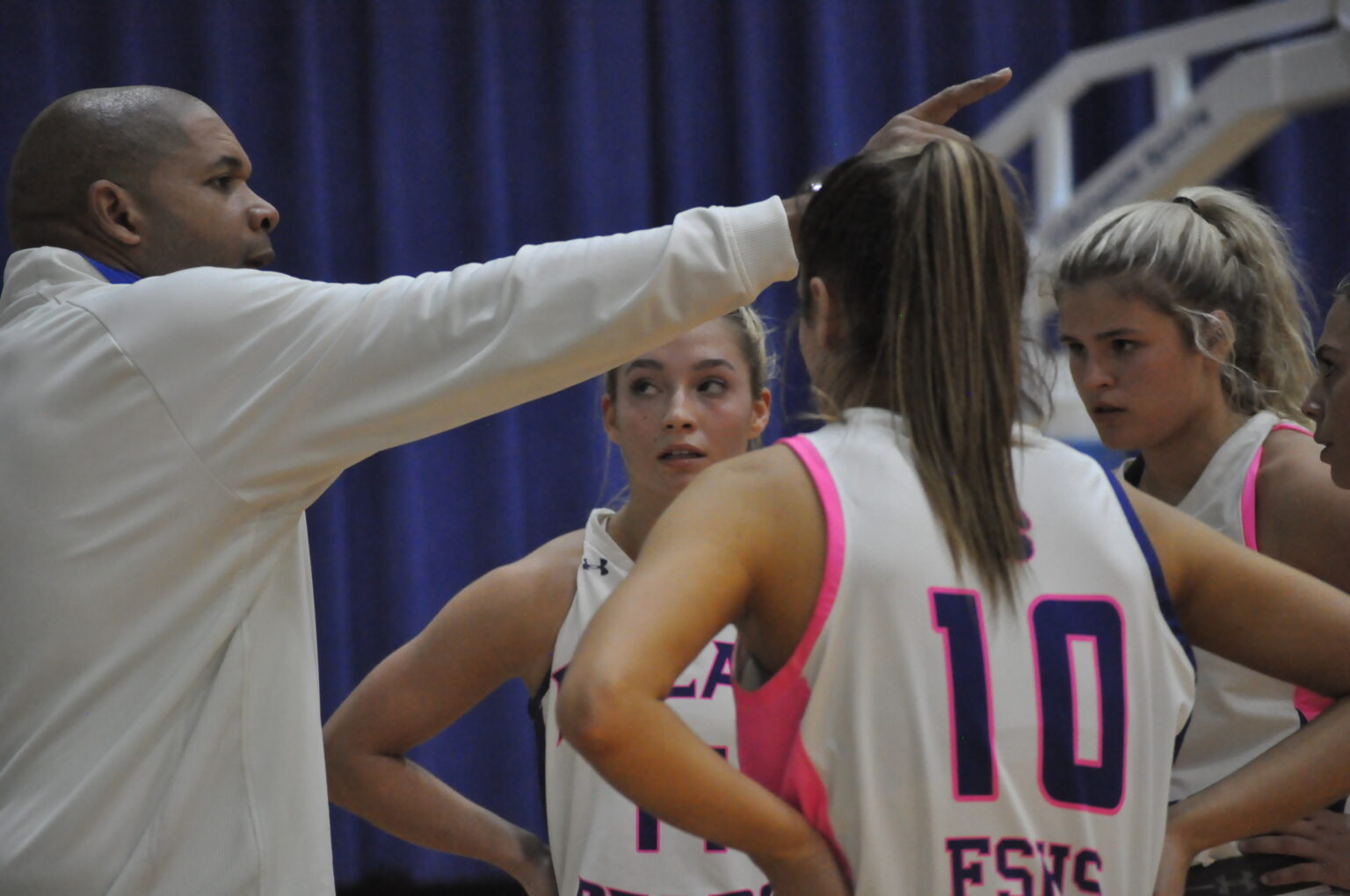 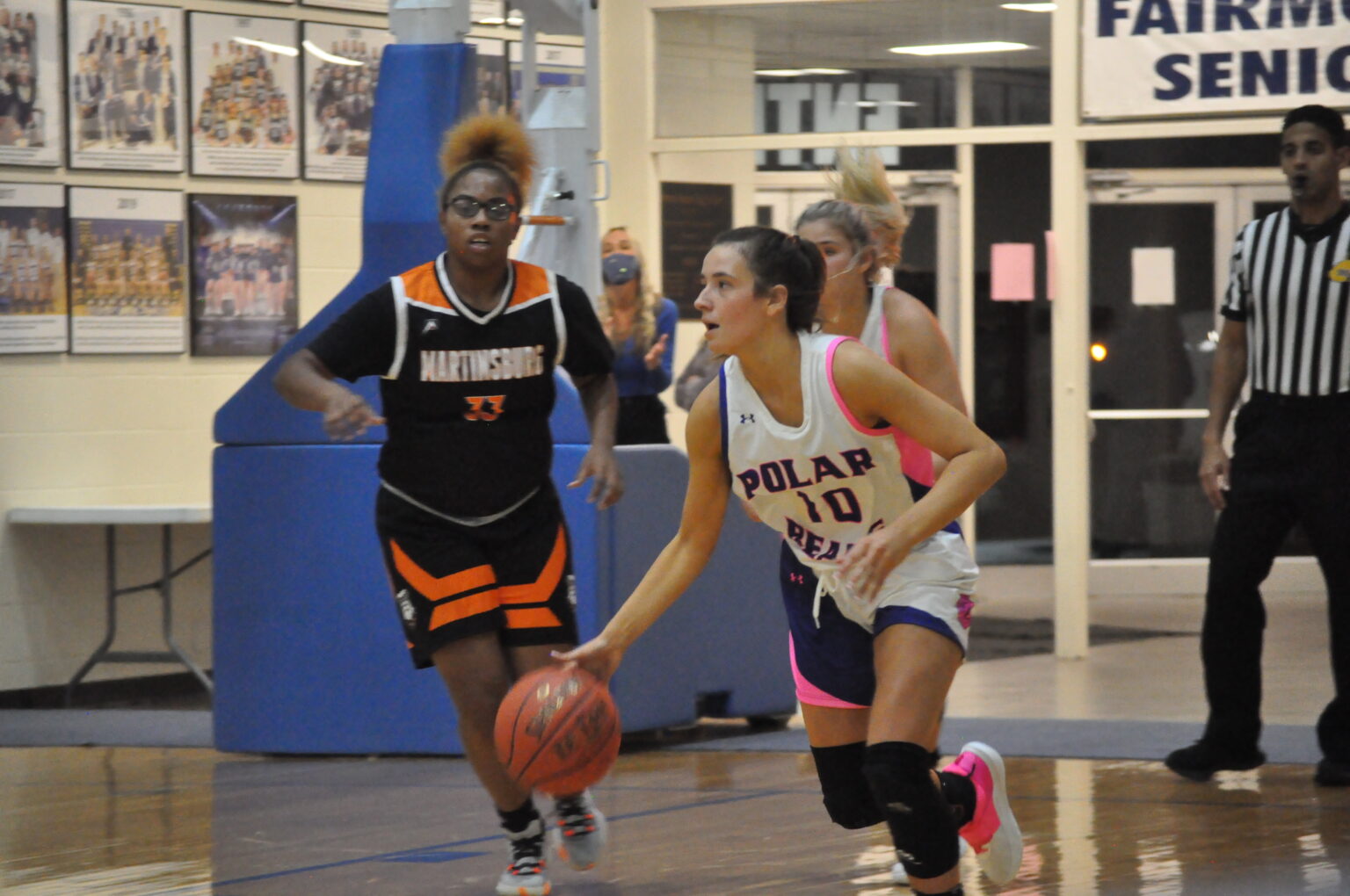 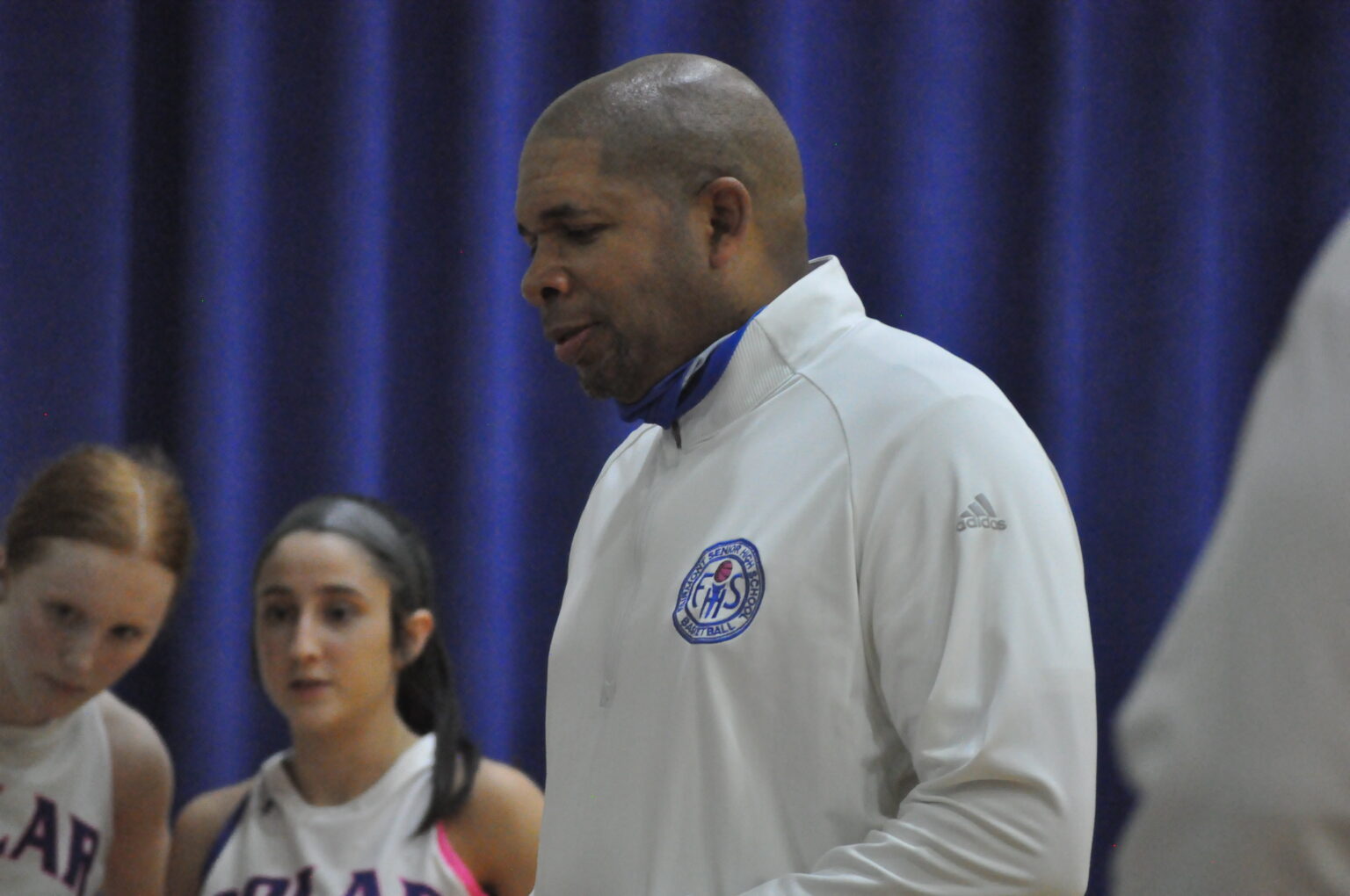 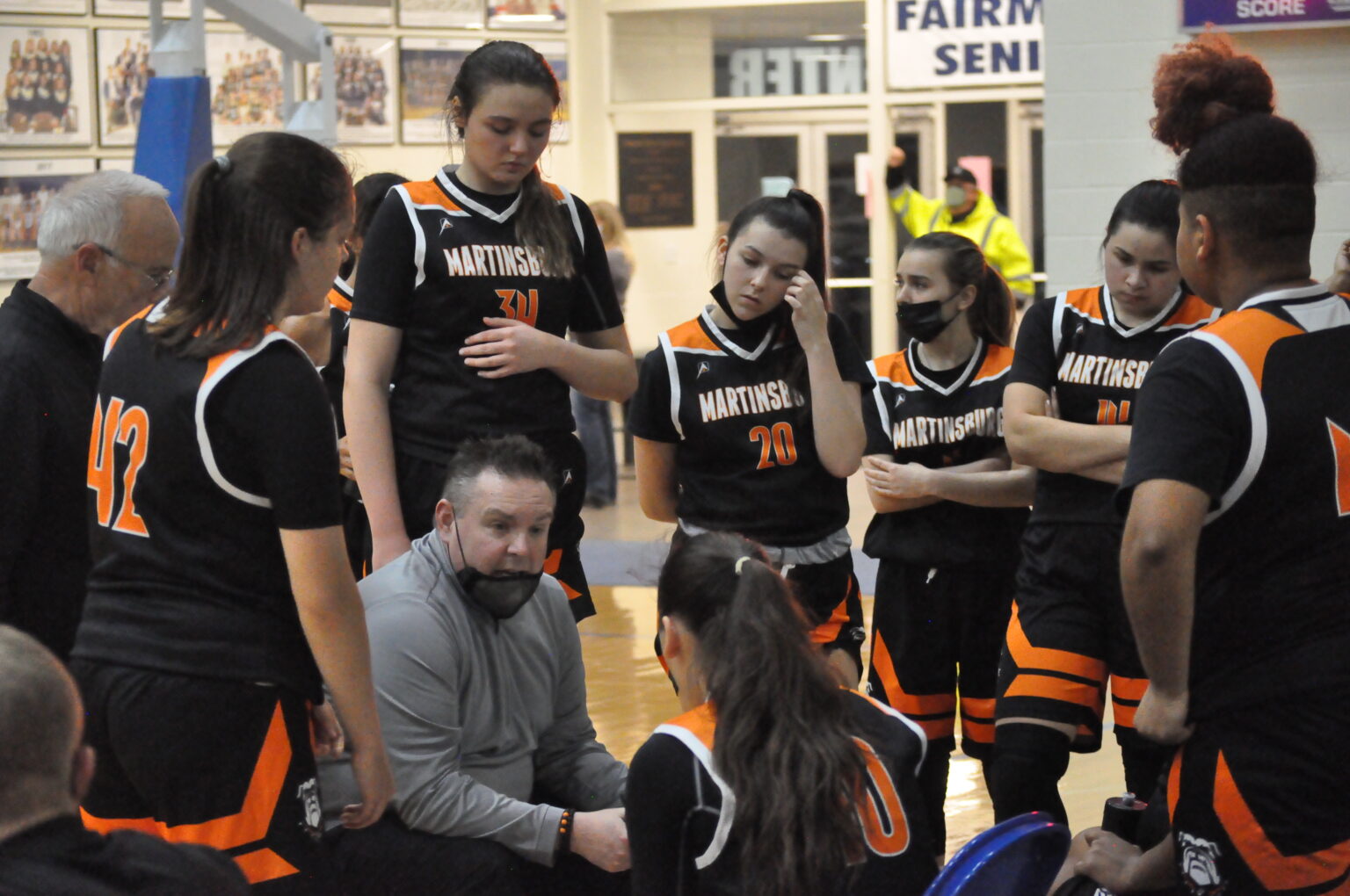 Martinsburg coach Kyle Triggs talks to his team during a timeout. Photo by Greg Carey/WVMetroNews.com 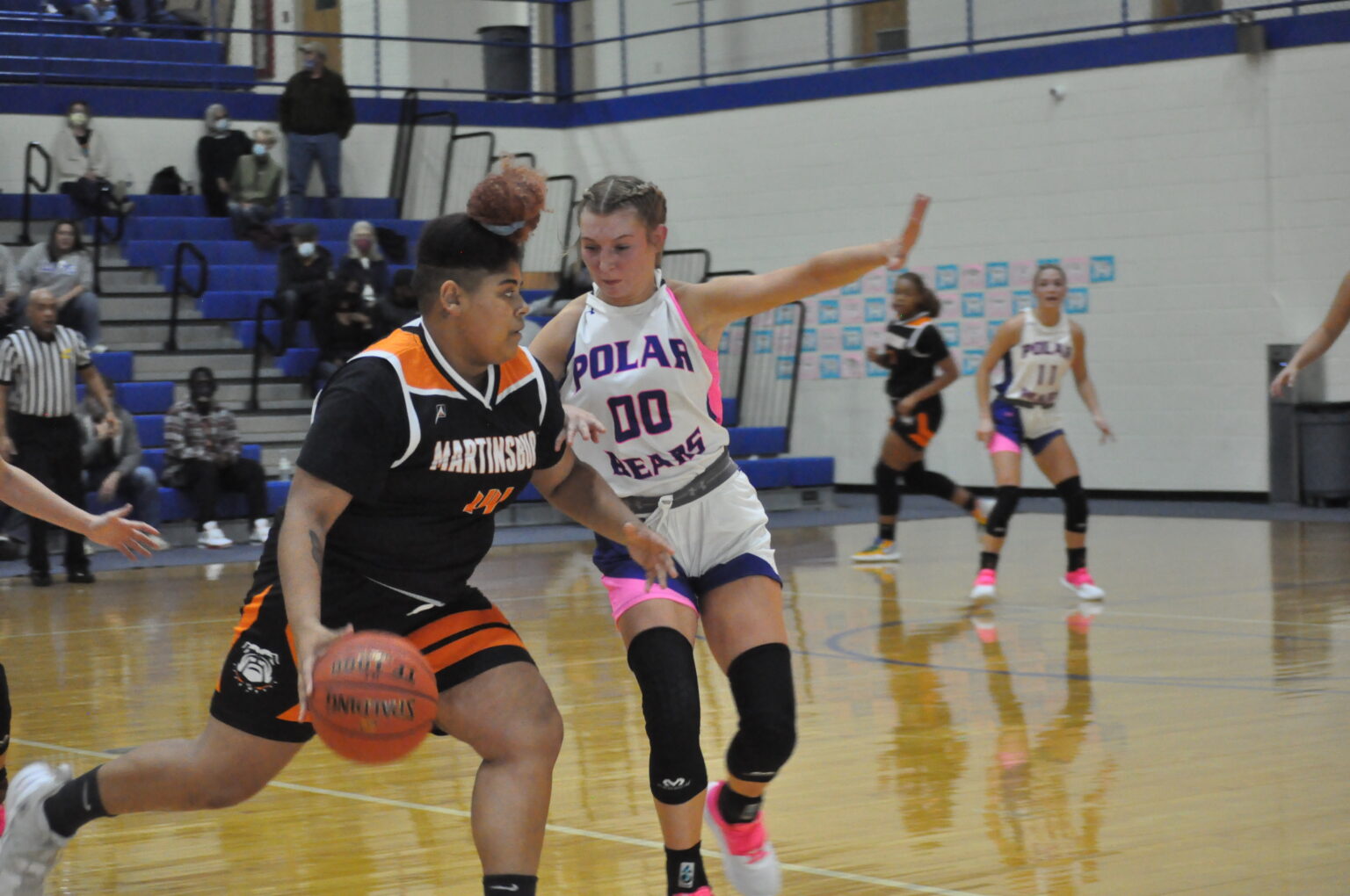 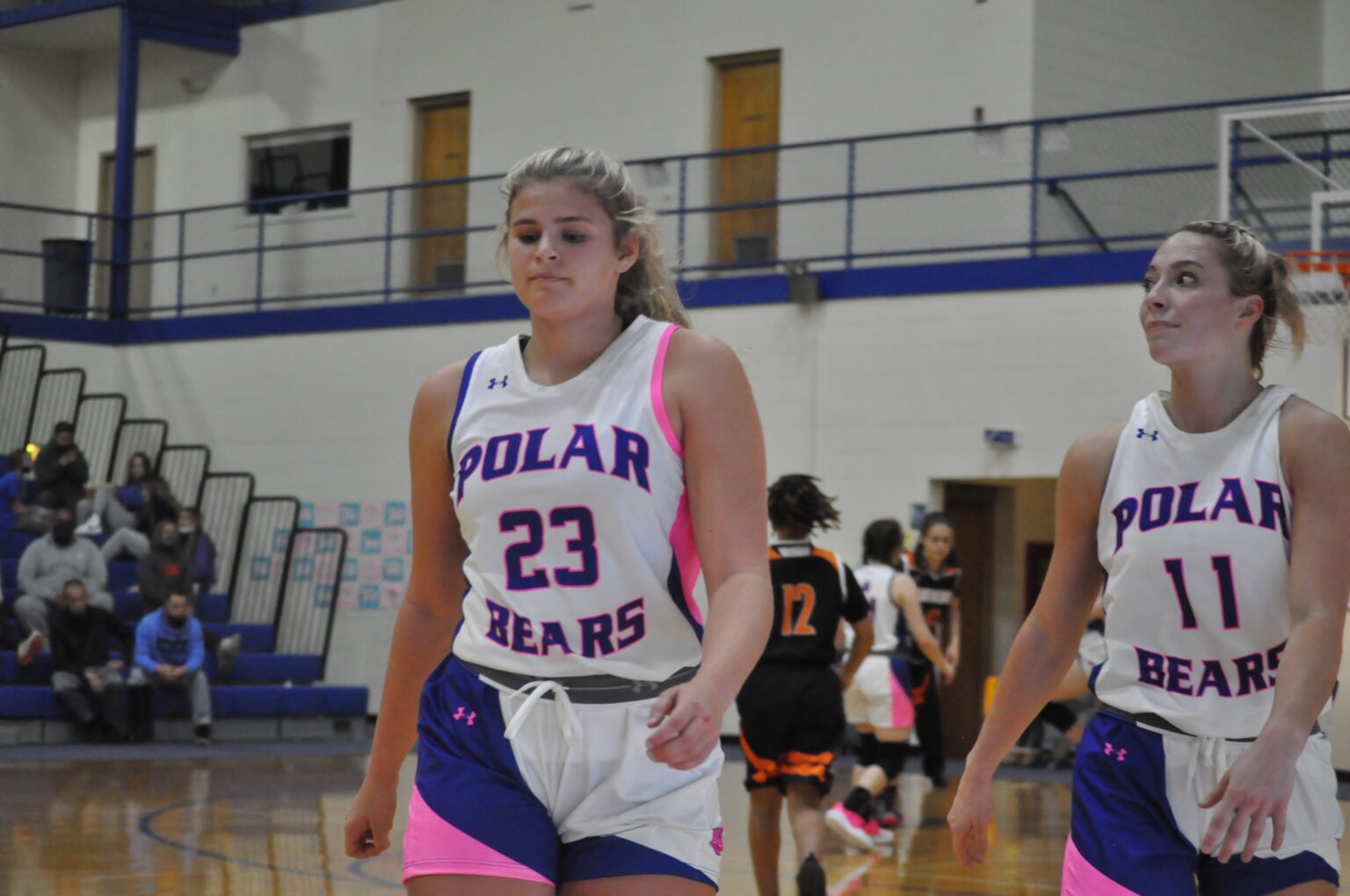 FAIRMONT, W.Va. — From the outset of Friday’s matchup between Fairmont Senior and Martinsburg, it was apparent the Polar Bears’ full-court defensive pressure was problematic for the Bulldogs.

That pressure ultimately led to Martinsburg finishing with two more turnovers than field-goal attempts, and the Polar Bears turned their tenacious defense into offense to cruise to a 73-36 victory at the Fairmont Senior Field House.

Afterward, veteran FSHS head coach Corey Hines sang the praises of his assistant coaches and opted to have a pair of them talk about the Polar Bears’ third victory in as many games.

“We were more disciplined than I’ve seen our team be in a long time as far as maybe not getting what we wanted fluently, but staying within our system and finding and getting the exact thing we wanted,” Polar Bears’ assistant Ryan Sevier said. “It might not look the cleanest, but you have to read and react. It shouldn’t look robotic. We did that tonight and we spread it around and found the angles we needed to.”

Fourteen of Martinsburg’s 40 turnovers came in the opening quarter, with an Olivia Mayer 3-pointer serving as the Bulldogs’ only points as they fell behind, 15-3.

FSHS guard Marley Washenitz was assertive from the opening tip and scored eight of her game-high 29 points in the first period.

“We still have some rust and we saw that early on in the first half with the missed layups,” FSHS assistant Corey Boddy said. “The defense is great and we love the tenacity. It’s just cleaning up our offensive play. It’s early, but we’ll hit that stride soon.”

Polar Bears’ forward Meredith Maier led the offensive charge in the second quarter, scoring 12 points to help the Polar Bears build their advantage to 30-11 at halftime.

Maier, who led all players with 16 points at halftime, scored in a variety of ways during the frame — on a pair of short jump shots, a triple, a left-handed layup that became a conventional three-point play and another basket from close range.

“We’ve been on here a lot about that. Sometimes I don’t think she knows who she is,” Sevier said. “She’s a force in there and her mid-range is as pure as they come. You can’t stop an athletic body like that going to the basket without fouling. She understood that tonight and she got better tonight. We saw improvement.

“Last week, maybe there was a little bit of hesitation. We’ve been on her all week about that and she took the message and showed why she’s signed as a Division I player.”

Washenitz scored the first seven points after halftime and had 13 of the Polar Bears’ 26 points in the third quarter as they took a commanding 56-22 lead into the fourth.

MHS (0-4) had double-digit turnovers in each of the first three quarters and entered the fourth with 36 in all.

Washenitz was a big factor in disrupting Martinsburg’s offense and recorded 12 steals to go with her game-high totals of 29 points, nine rebounds and six assists.

Maier finished with 21 points and seven rebounds in the win, while point guard Emily Starn scored 11.

“Once we get into our groove, those girls will be just fine and we look forward to [all five starters] scoring in double figures,” Boddy said.

Mayer led the Bulldogs with 15 points in defeat.

“Our thought process there is to really pester their first option and make them uncomfortable all night and make somebody else step up that might be ready for the moment, but we’re going to find out,” Sevier said. “We’re going to see who else can step up and play. We know Olivia can go and we really wanted to stay in her hip pocket all night and make other people make plays around her.”

Martinsburg shot nearly 40 percent from the field, but attempted 29 fewer field goals than Fairmont Senior, which got up 67 shots.