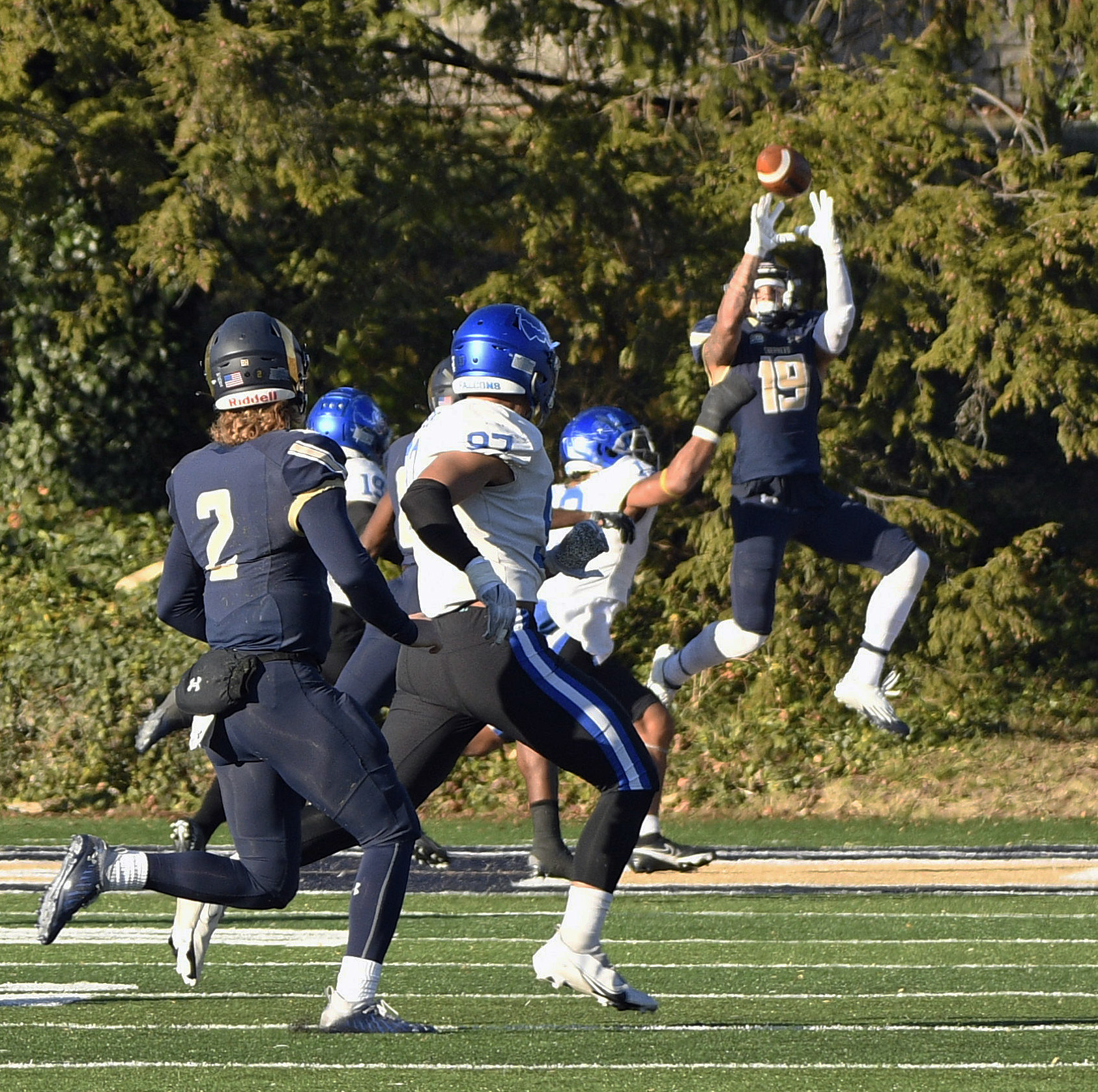 MORGANTOWN, W.Va. — Shepherd (13-1) has won three games in the NCAA Division II playoffs by seven points or less. Each game was more dramatic than the one that preceded it.

The Rams defeated Findlay, 38-31 in the opening round. In the second round, Tyson Bagent hit Josh Gontarek in the corner of the end zone on a 23-yard scoring strike with one second left to defeat the Falcons, 38-34. Last Saturday, the Rams won on a Hail Mary pass to defeat Kutztown, 30-28. Bagent connected with tight end Alex Wetzel on a 42-yard strike as time expired.

“The Hail Mary is a play we practice all year long. Our kids executed it,” said Shepherd head coach Ernie McCook. “It is a low percentage play to execute but we had No. 2 [Bagent] there and we had Alex Wetzel, the tight end, there. He made a great play and high-pointed the ball. As I was sitting there watching it on the sideline, I was like, ‘Wow! It was just like we practiced it’.”

“Against Notre Dame, it was kind of an actual play to get open to score,” Bagent said. “The one against Kutztwon, that was just a Hail Mary call. I just had to buy time by getting out of the pocket, giving Wetzel a chance to get up and get it.”

The Rams are in the fourth year under the direction of McCook. He was an 18-year assistant for veteran frontman Monte Cater. After the 2020 season was canceled, McCook welcomed back several players who took advantage of the additional season of eligibility.

“It actually hit me when I started telling our kids that we were canceling the 2020 season due to COVID. The responses that I got from a lot of our players was, ‘Coach, we are going to stick around’. Because I had a lot of guys that really could have moved on with their careers. They could have graduated and moved on and started their professional lives and families. I have so many guys in this program that put their futures on hold so they could play this football season.”

“It was a very smart move for the university to put somebody at head coach like Coach McCook, who has been in the program for so many years,” Bagent said. “He knows the ins and outs and how everything was operating under Coach Cater. I think he took that and ran with it and he added his little niches to everything. I think it has worked out great. Coach McCook is a great recruiter. He knows who he wants around him and he knows how he wants things to go.”

Bagent is a graduate of Martinsburg High School and he is a finalist for the Harlon Hill Trophy. The honor is awarded to the Division II National Player of the Year. In 14 games this season, Bagent has tossed 52 touchdown passes and passed for 4,751 yards. He credits his time as a Bulldog for making a quick transition to the college game.

“Our coaching staff did a great job of preparing us that if we did want to play at the next level, they did a great job of helping us adapt to what it was going to be like. There’s a lot of similarities of how the teams are run from Martinsburg to Shepherd,” Bagent said.

The Rams visit No. 1 seed Ferris State (12-0) in Big Rapids, Michigan Saturday afternoon in the national semifinals. The game will kickoff at 3:30 p.m. and will be broadcast on ESPN+. The winner advances to the NCAA National Championship game December 18th in McKinney, Texas.

“It is going to be an uphill battle. We are going to have to play flawless football. We are going to have to match their intensity at the line of scrimmage on both sides of the ball, offensively and defensively. We need to make the ordinary plays extraordinary. Not everything is going to be a 60-yard touchdown. We have to make plays, be consistent and take care of the football, grab a turnover or grab a possession any way we can. The football gods have been with us the last two weeks. We are going to need them with us one more week I am sure,” McCook said.

“Everybody thinks they are the best and everybody has us as the underdog. They’ve got a high-powered offense. They’ve got really good offensive and defensive lines. We are going to have to play really well in order to make it to the national championship,” Bagent said.