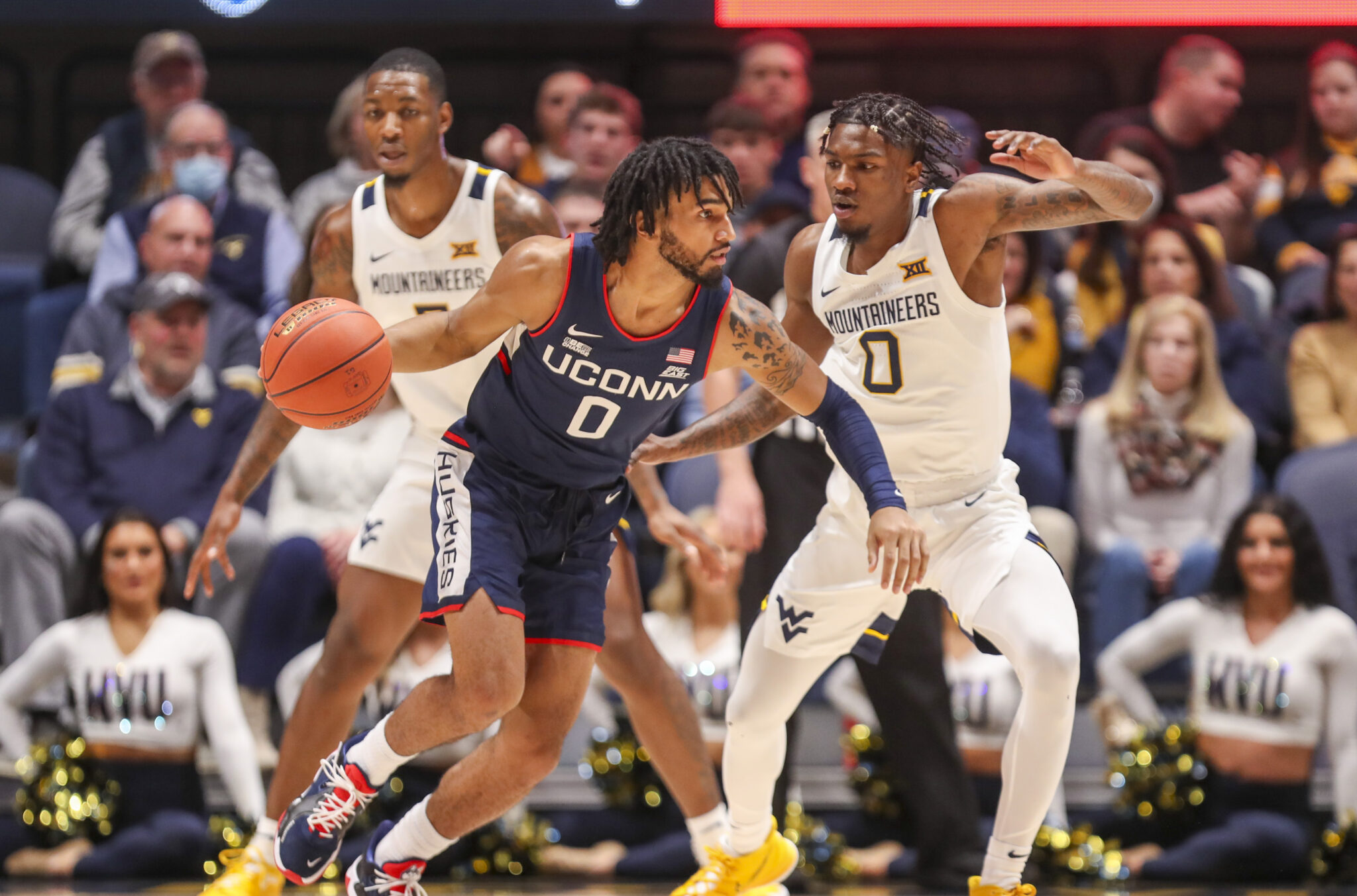 Much of what the Mountaineers have been able to accomplish can be attributed to their team defense, which is holding opponents to an average of 60.5 points.

WVU has made significant progress defensively over the season’s first six weeks after veteran head coach Bob Hugging expressed his displeasure with that aspect of his team early on.

“He was saying that to motivate us to actually want to be better at it and play defense,” guard Kedrian Johnson said. “We’ve come more together since the beginning of the season. We have a lot of new guys and some people didn’t know rotations and were new to this type of system. It’s a learning process for everybody.”

The Mountaineers have not allowed 60 points in each of their last five games and have held the opposition to fewer than 60 points in eight of its 11 contests.

The most recent strong defensive showing came last Saturday at Legacy Arena, when the Mountaineers rallied for a 65-59 victory against UAB in their first road game this season. WVU limited the Blazers to two field goals over the final 8 minutes, allowing Huggins’ team to overcome a nine-point deficit for it seventh straight victory.

“It’s the will to want to win and we have to lock in defensively when it’s time to win,” Johnson said.

Huggins believes a good portion of his roster has improved on the defensive end.

“Some of them have gotten a lot better,” he said. “Others have probably stayed the same, but we have a core of guys who really have gotten better.”

Wednesday’s contest at the Coliseum features two teams on a lengthy win streak as the Penguins (7-3) enter having reeled off five consecutive victories.

Youngstown State is coached by Jerrod Calhoun, who is in his fifth season guiding the Penguins. Calhoun was a student assistant at Cincinnati under Huggins, then an assistant coach at Walsh (where Huggins held his first head coaching job), before coming to Morgantown, where he served as the assistant director of basketball operations for four years and an assistant coach for one season.

Calhoun parlayed that stint into a head coaching gig at nearby Division II Fairmont State, and the Falcons enjoyed a wealth of success in five seasons under his watch, including a 34-3 record and national runner-up in 2016-2017 — his last season at the Mountain East Conference school.

“Jerrod has worked a system that almost won him a national championship at Fairmont, and took that to Youngstown and done a great job with it,” Huggins said.

YSU is allowing 65.6 points on average, but after surrendering at least 75 points in each of its first three games, the opposition has reached that mark only once over the last seven contests.

The Penguins have also overcome a season-ending Achilles injury suffered by Garrett Covington, who averaged 10.3 points in three games before being sidelined.

Akuchie is also the team’s top rebounder at 7.1 on average.

“Jerrod’s done a great job of coaching them and recruiting people who fit his system and what he wants to do,” Huggins said. “They really run good offense and they’re very patient. They’re very skilled in getting the ball to where they need to get it to be successful.“

WVU continues to be led by senior guard Taz Sherman, who is sixth in all of college basketball with a 21.4 scoring average. Sherman struggled for much of the win over UAB, but scored 15 of his game-high 17 points after halftime to aid the comeback.

Fellow senior guard Sean McNeil is the Mountaineers’ only other double-figure scorer at 13.1 points.

Jalen Bridges averages 7.1 points, but has not scored more than eight points in seven straight games.

“I need to be more assertive,” Bridges said. “Sometimes I get lost in the mix out there. I’m doing other things well, but not scoring the ball as much as I need to. It’d be a little bit less on Taz and Sean’s shoulders if I could help with the scoring load a little bit.”

Guard Malik Curry averages 6.7 points and left the game against the Blazers for good with an ankle injury in the first half, but is “fine”, according to Huggins.

Johnson has established himself as an elite on-ball defender and has a team-best 24 steals, while front court reserves Gabe Osabuohien and Pauly Paulicap continue to make more of an impact than what statistics suggest.

“The one thing everybody learns here is to compete,” Huggins said. “A whole lot of people, when we were down eight at UAB, thought it was over, but we competed.”