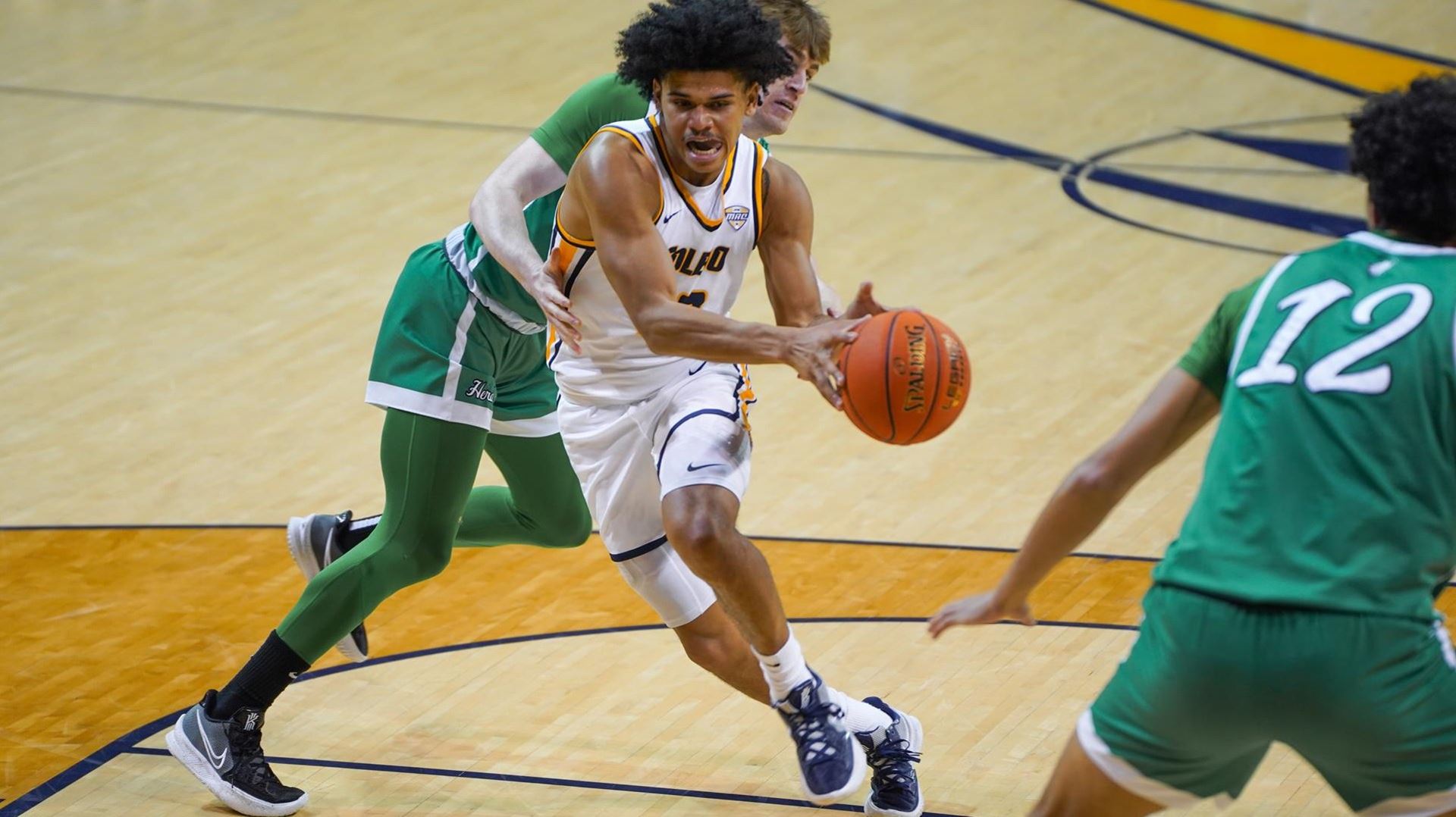 Toledo led from start to finish and cruised past Marshall, 95-63, Tuesday night at Savage Arena in Toledo, Ohio.

The Rockets improved 4-0 at home this season and are 8-3, while the Thundering Herd drops to 7-6 as both teams now get ready for conference play. Marshall begins Conference USA action December 30 at Louisiana Tech. The Rockets start Mid-American Conference play one day earlier at home against Western Michigan.

Toledo had all five starters in double figures, plus one backup, and enjoyed a banner shooting night. The Rockets won their fifth in a row against the Herd and now lead the overall series 38-23.

Herd coach Dan D’Antoni spent extra time in the locker room after the game with the team following its third straight defeat.

“I’m just upset a Marshall team came out and played like that,” D’Antoni said. “Under me especially. That’s not good.”

D’Antoni believes the Herd’s problems started long before they took the floor.

“We don’t play as hard as they play,” D’Antoni said. “Anybody preparing for this game. When you shoot 41 percent from the foul line with this crowd (3,769), there’s a funk going on. We’ve got to find it. We’ve got to eliminate it.”

The Herd offense, which normally averages 80-plus points, has not broken 70 in three straight games (65 vs. Ohio University, 60 vs. Northern Iowa and Tuesday night).

Taevion Kinsey led Marshall with 19 points and Andy Taylor had 13. The two went a combined 12 of 40 from the field and 3 of 15 on 3-pointers. Obinna Anochili-Killen, who didn’t start due to being under the weather, came in with about 17 minutes left and recorded eight points and five blocked shots (60 for the season).

“Second half I thought he was the only one to show spark,” D’Antoni said of Anochili-Killen. “He actually did things he can do. Played at the level we have to play to compete. Hopefully he’ll be at full strength. Taevion has to come out and play like the lead horse. Andy has to up his game.”

In a nutshell, the Herd has a lot to ponder before the start of C-USA play. There’ll be a lot of player and coach reflections during the break.

“I’m going home, self-reflect over Christmas,” D’Antoni said. “I challenged our players to do the same thing. We’re doing too many things wrong. What we’re doing right now obviously is not as good a team that we have nor the players that we have.

“I’ve never blamed one person. When it’s this bad, it’s the whole ball club. I’d be lying to you if I told you I knew exactly what is wrong. You don’t play as poorly as we did today and it be one or two things you can recognize, get it fixed and say it’s good.”

“I’m really proud of the complete effort our guys put forth tonight,” Rockets coach Tod Kowalczyk said. “We obviously had a great start defensively. When our defense gives out offense life like that, we’re hard to defend. The best part is we’re as a team going to continue to get better. Now it’s about the regular season, and our goal is to repeat as MAC champions.”

D’Antoni maintained he hasn’t lost hope in a turnaround.