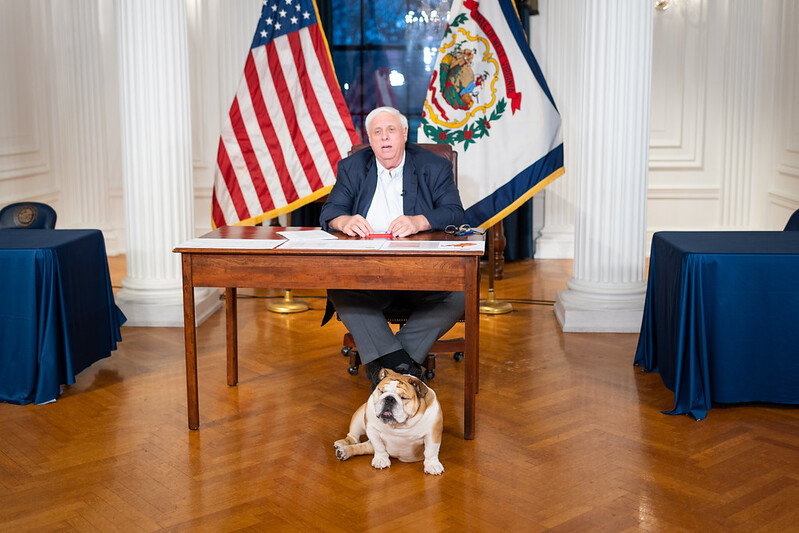 Gov. Jim Justice leads a news briefing with his dog nearby.

Legislators believe they’re likely to be called into a special session early next week, just prior to the annual 60-day regular session beginning, and Gov. Jim Justice gave conspicuous advice today for West Virginians to tune into his State of the State speech.

That speech, made in front of state officials from all branches, is meant to set the tone for the legislative session. Governors have traditionally tried to make a splash with big policy initiatives or significant announcements, if they’ve got one.

The governor’s big speech is 7 p.m. next Wednesday.

“So please tune in next Wednesday at 7 o’clock and hopefully I won’t botch it up,” the governor continued, joking. “And you know, hopefully it will be good stuff. I know we’re going to report some really, really exciting news that’s going to be happening in the State of West Virginia.”

The governor made that statement around the mid-point of today’s briefing.

Then he circled back to the same topic at the end.

“Again, I remind everybody about the State of the State. I think we’ll have some exciting things we’ll be announcing then.”

The governor and other officials have gone no farther about what’s to be announced. Much talk at the Capitol has been centered around the possibility of an economic development project that would need some sort of legislative sign-off, prompting the possible special session.

West Virginians may be familiar with a series of economic development splashes that have not come to fruition — various natural gas cracker projects or the broad-ranging natural gas development deal with a Chinese development arm that was announced to great fanfare. Residents are waiting to see movement on a Hyperloop project announced in 2020.

Other big projects have taken root and thrived, though — the Toyota plant in Buffalo or the Procter & Gamble plant at Tabler Station.

The new sheet mill is expected to cost about $2.7 billion. The mill was described as producing hot-rolled sheet products with downstream processing including a tandem cold mill, annealing capabilities and initially two galvanizing lines.

Nucor noted that once state and local incentives, permitting and other regulatory approvals are received, construction is expected to take two years.

Nucor is known as the largest steel producer in the United States, as well as the largest “mini-mill” steelmaker. That is a small-scale steel mill that uses scrap metal for starter material. Nucor is also the biggest recycler of scrap in North America.

“We have recently executed two successful rebar micro mill start-ups and believe the East Coast market will be in need of additional rebar supply in the coming years, particularly with the recent passage of the infrastructure spending bill,” stated Leon Topalian, president and chief executive officer of Nucor.

The other two micro mills are in Florida and Missouri.

Rebar is used primarily in the construction of roads, buildings, sidewalks and other structures. Because of the variety of its end uses, rebar has had resilient demand characteristics over the last 20 years, and the company believes the rebar market is expected to show continued strength.

“Rebar has been a core business for Nucor since we got into steelmaking and this project will enable us to maintain our leadership position in the rebar market,” Topalian stated.