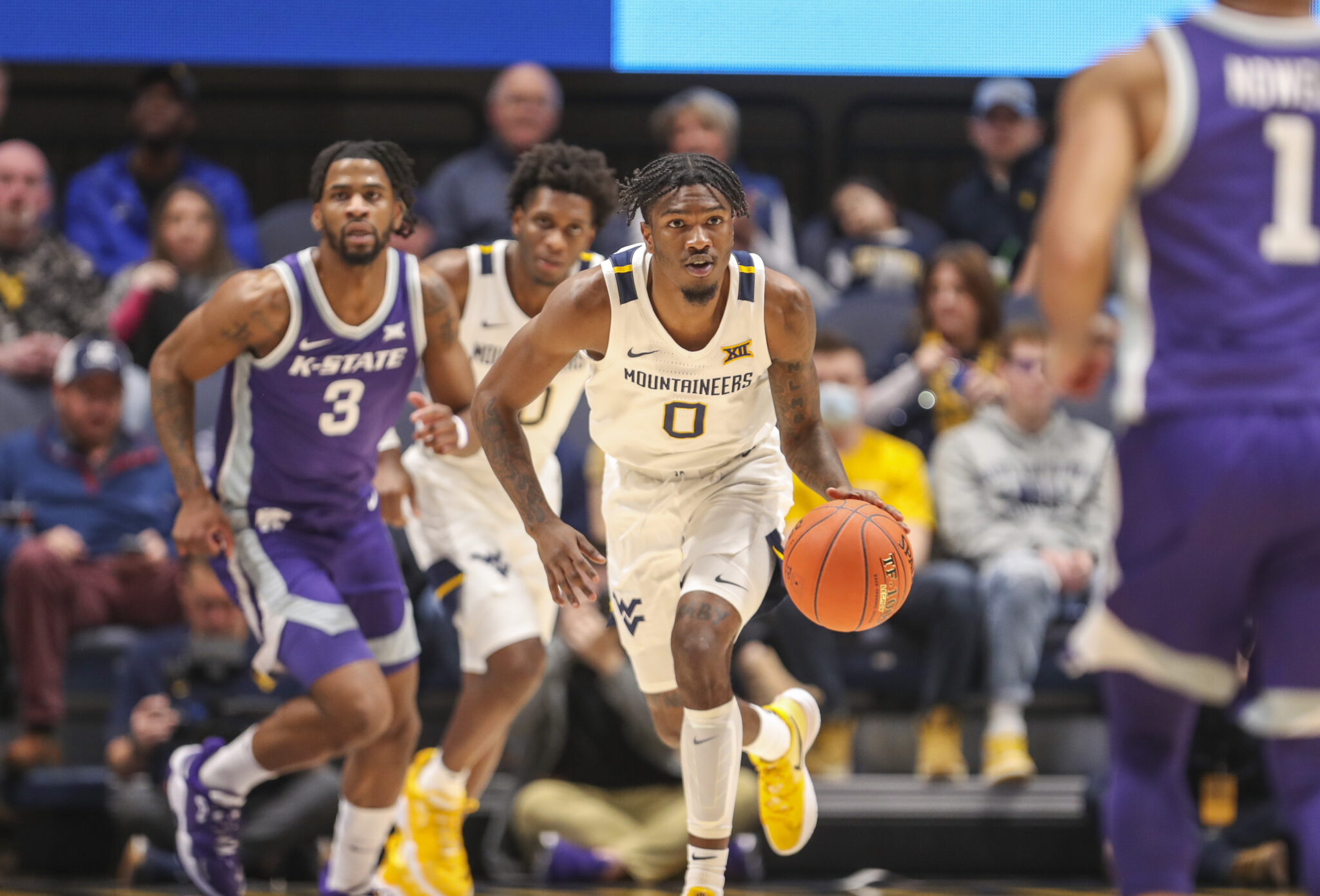 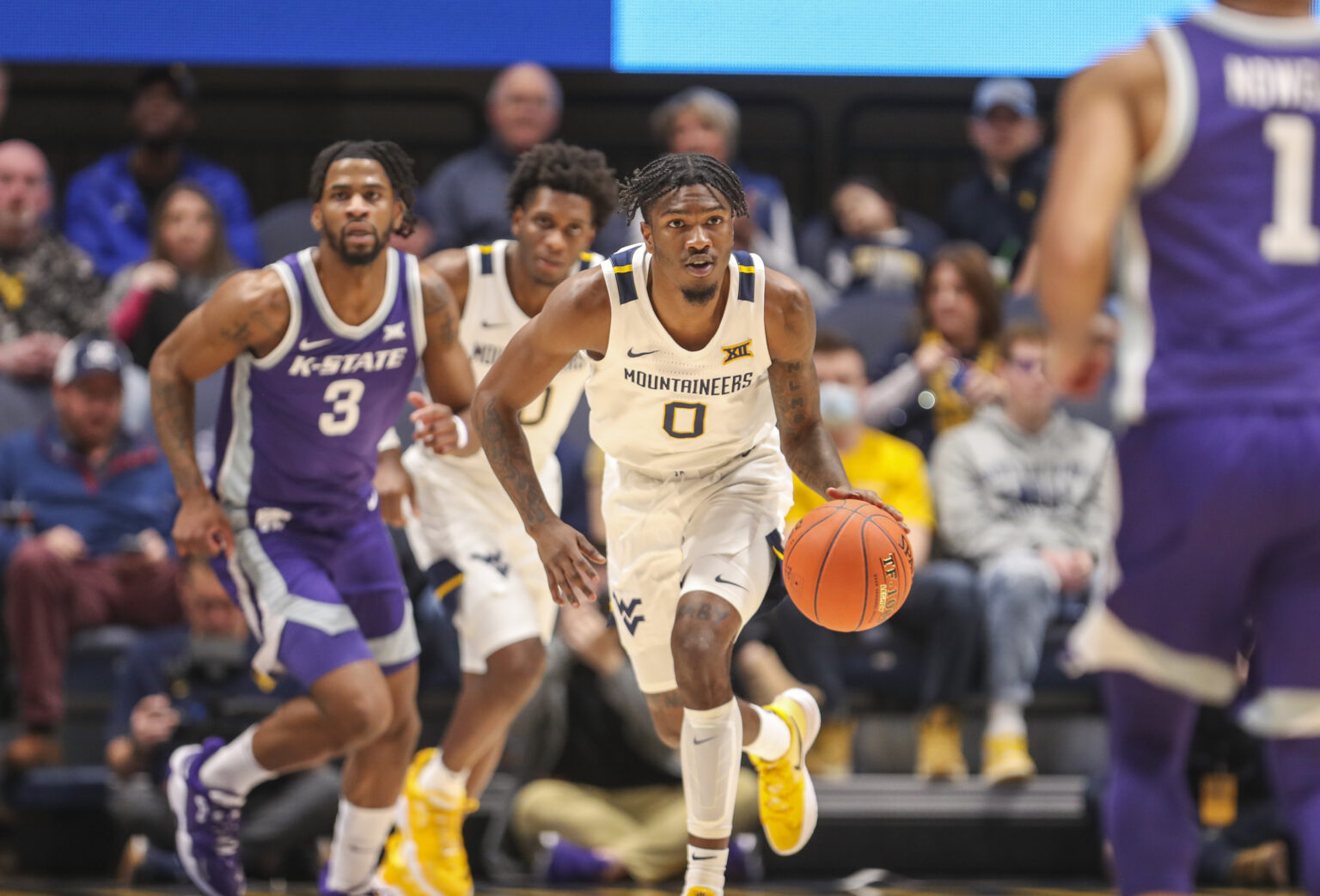 West Virginia guard Kedrian Johnson (0) dribbles the ball up the floor during the second half against the Kansas State Wildcats at WVU Coliseum. Mandatory Credit: Ben Queen-USA TODAY Sports 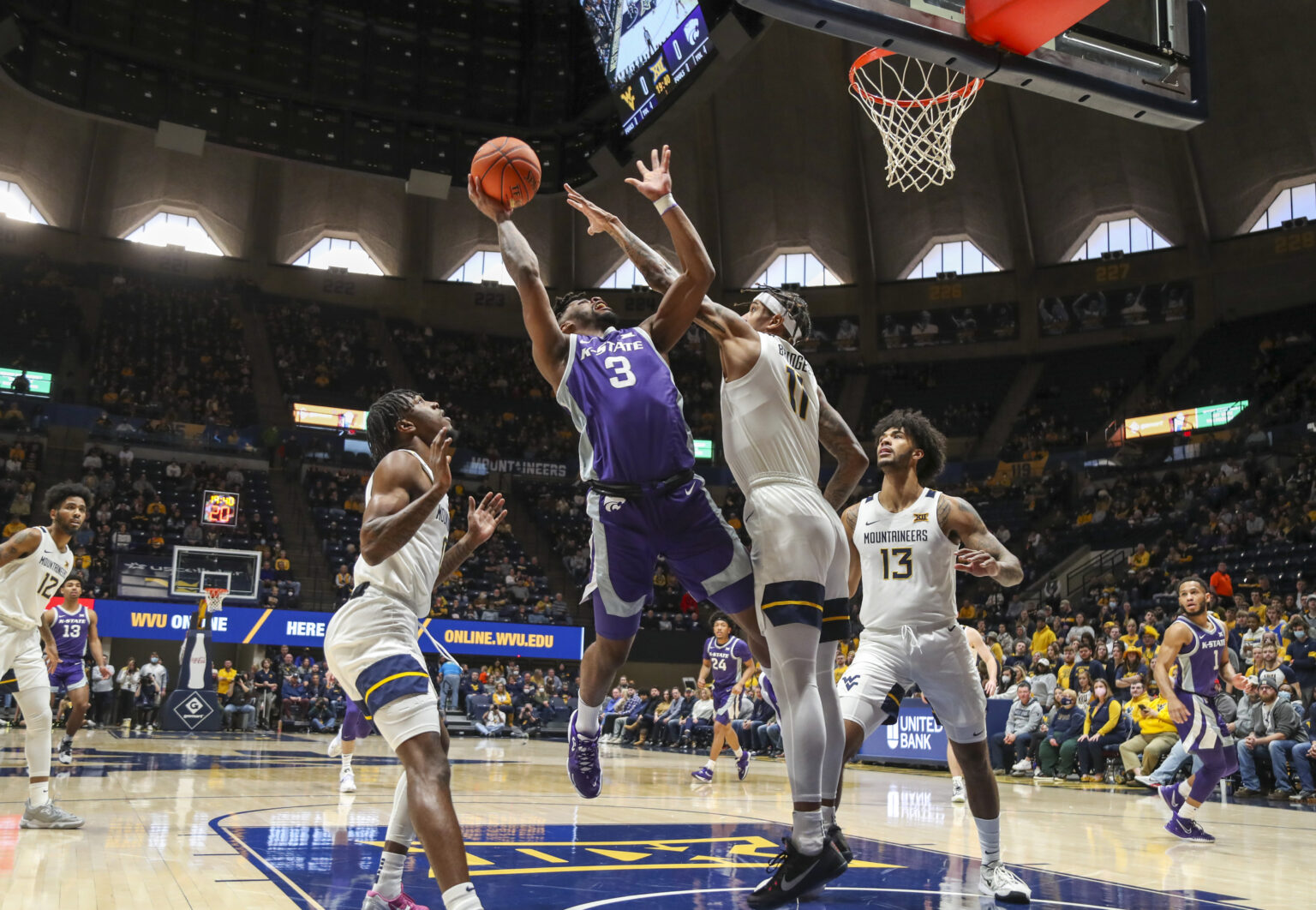 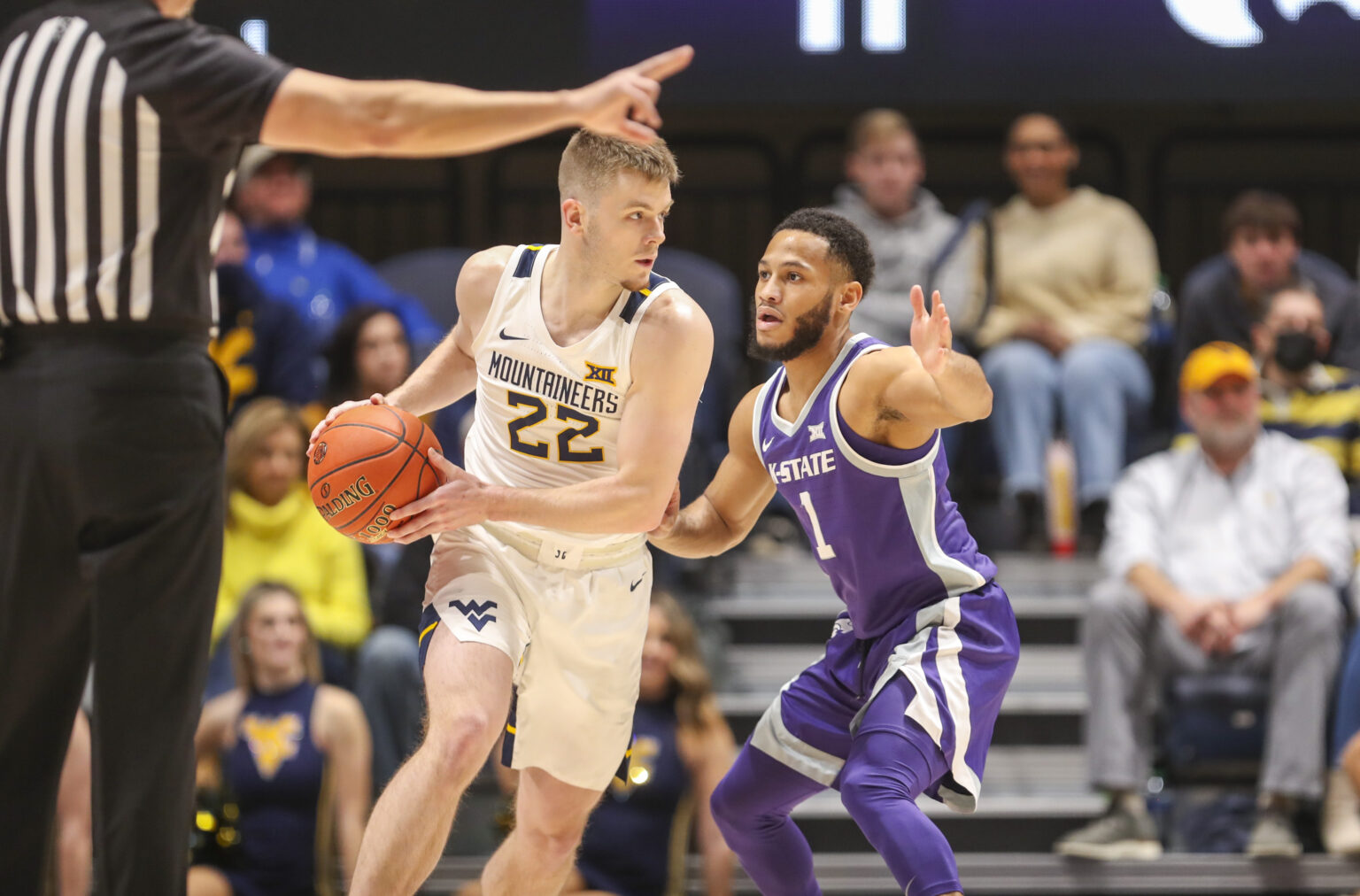 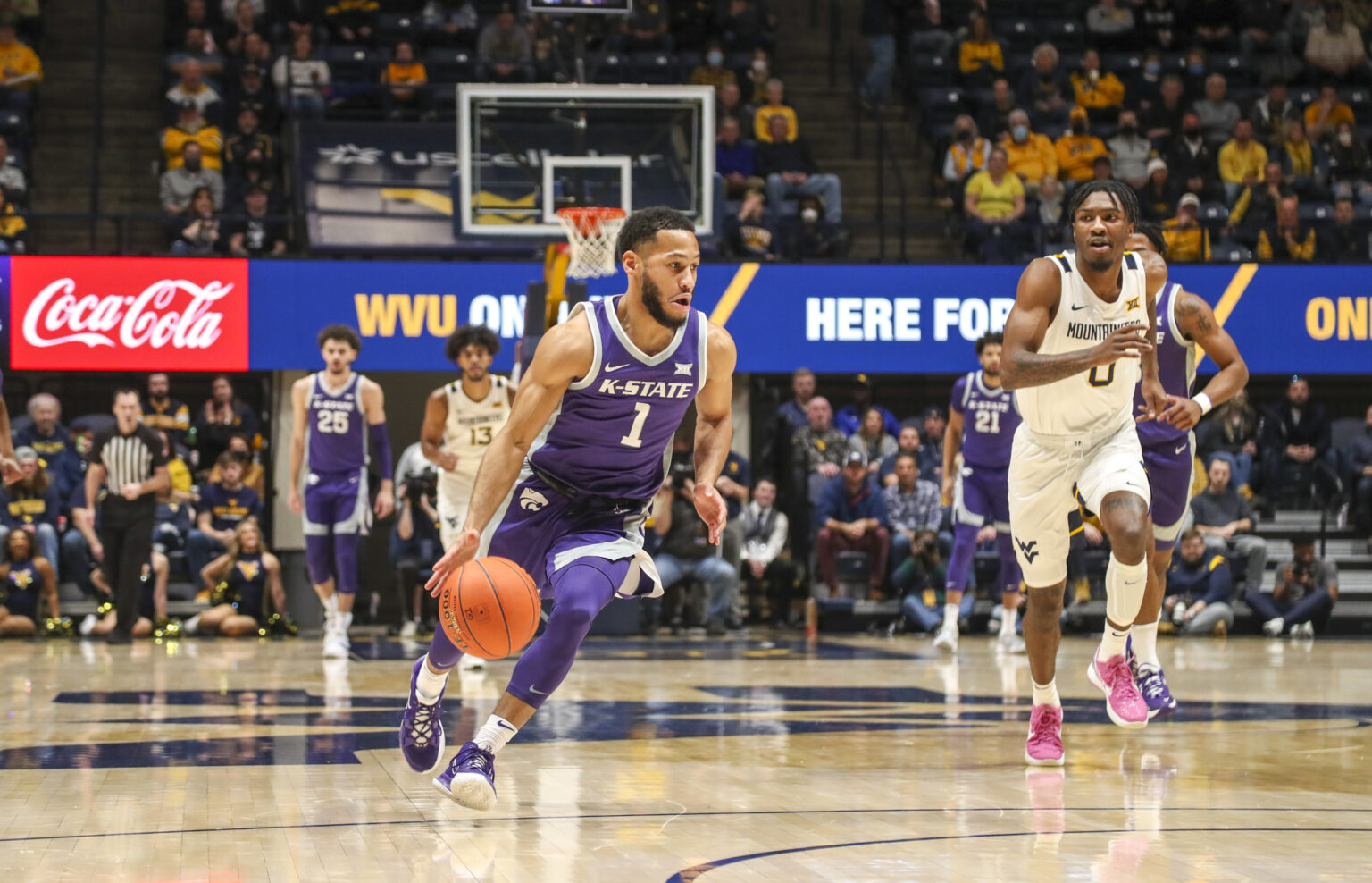 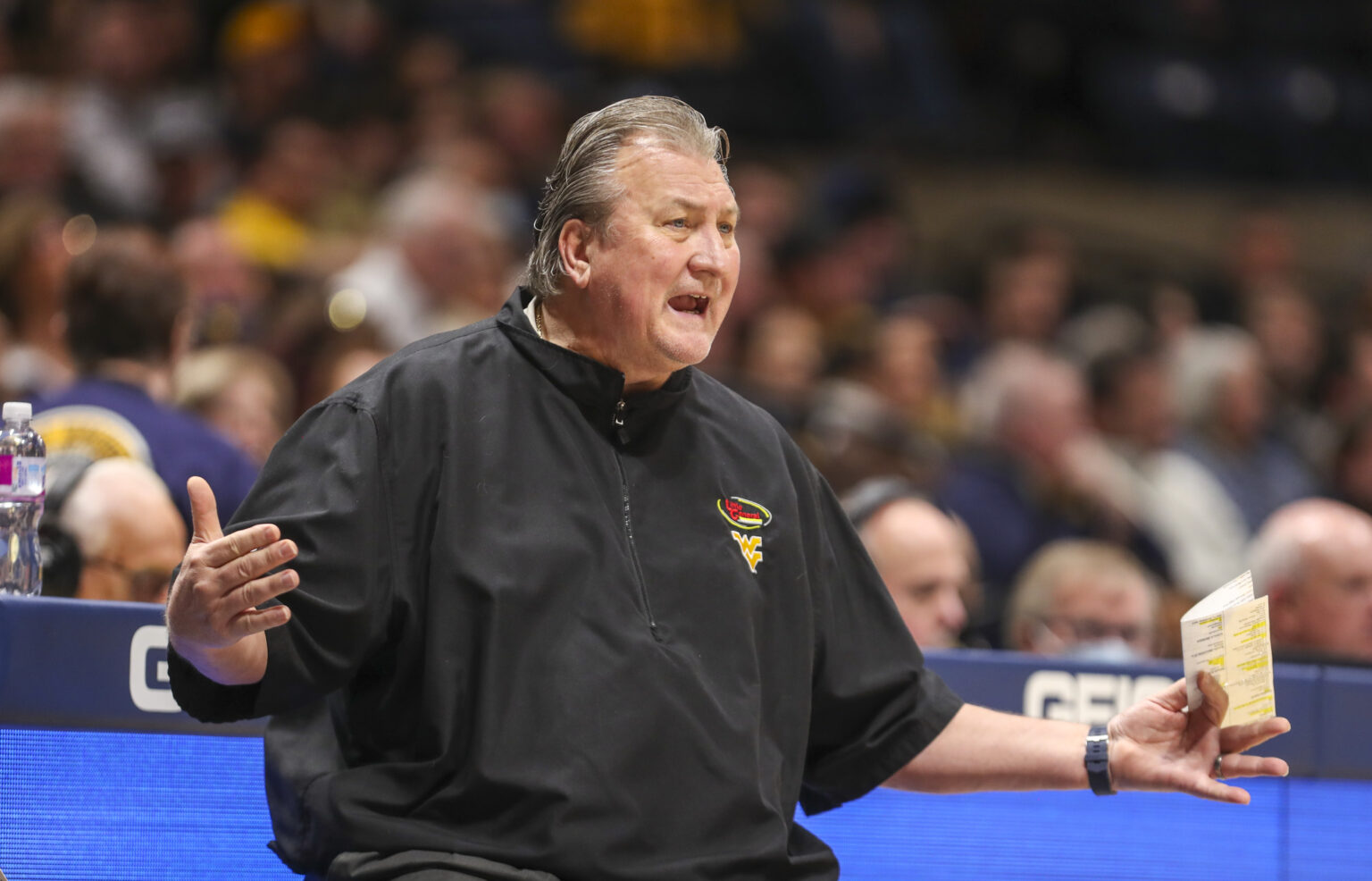 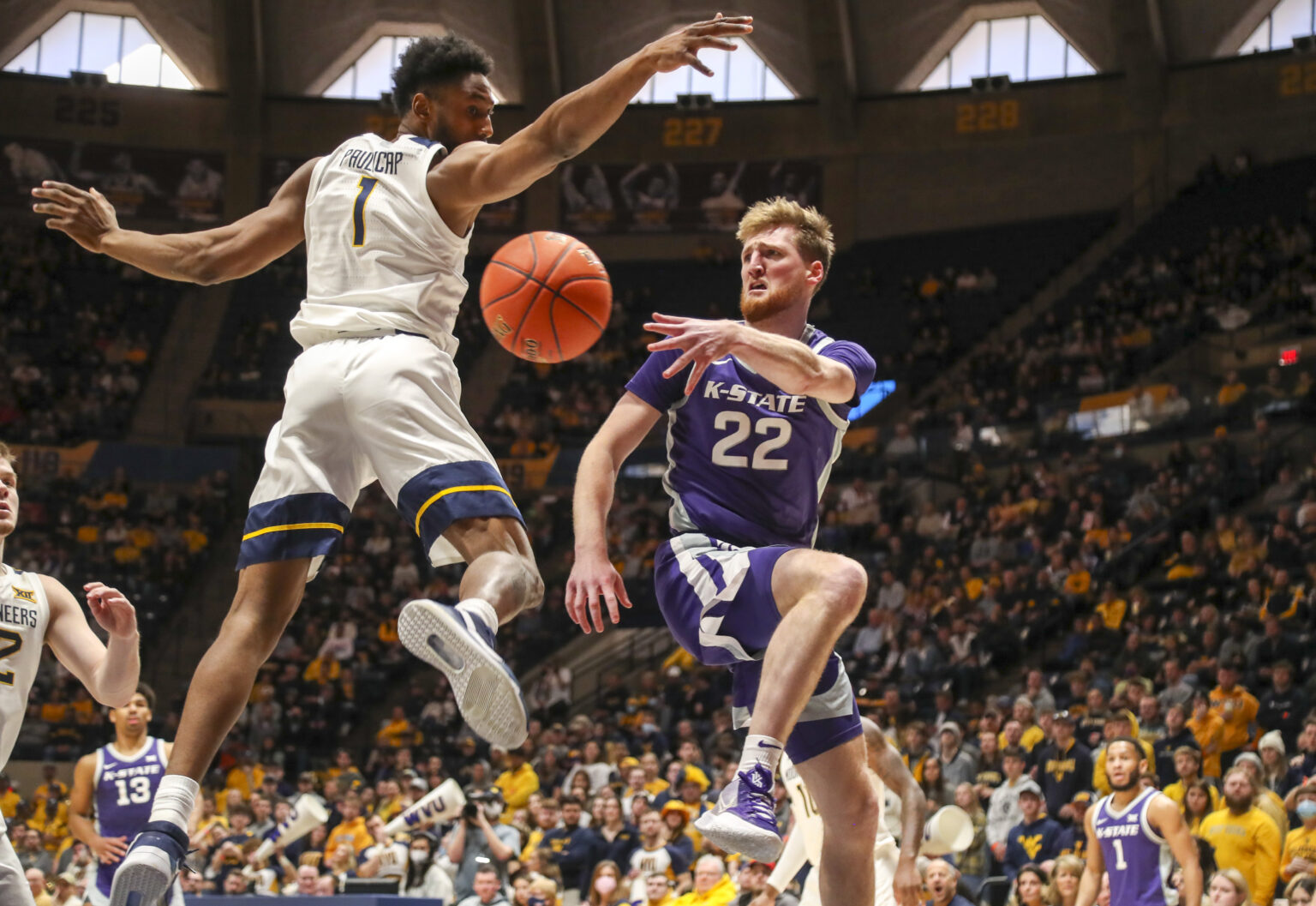 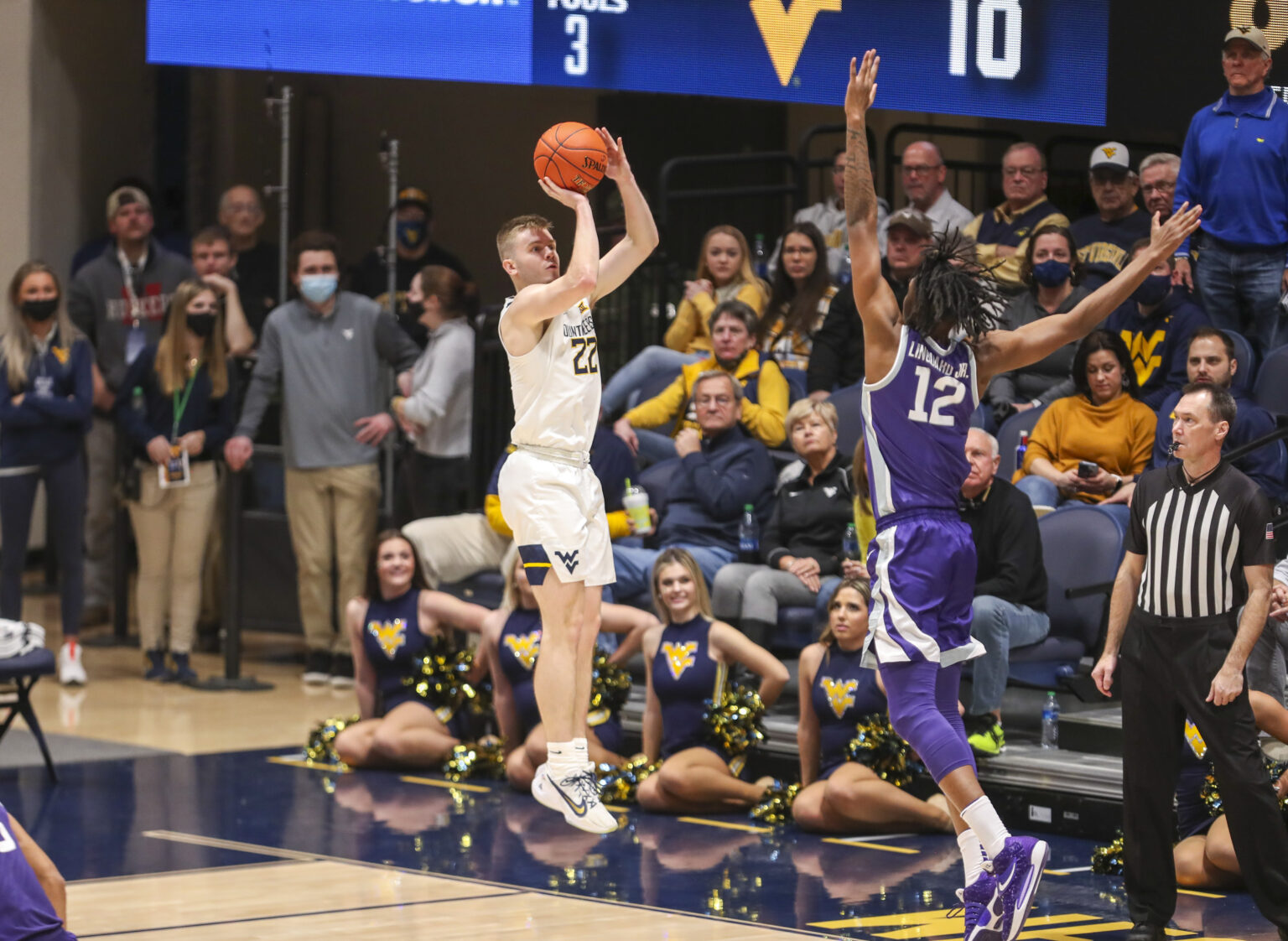 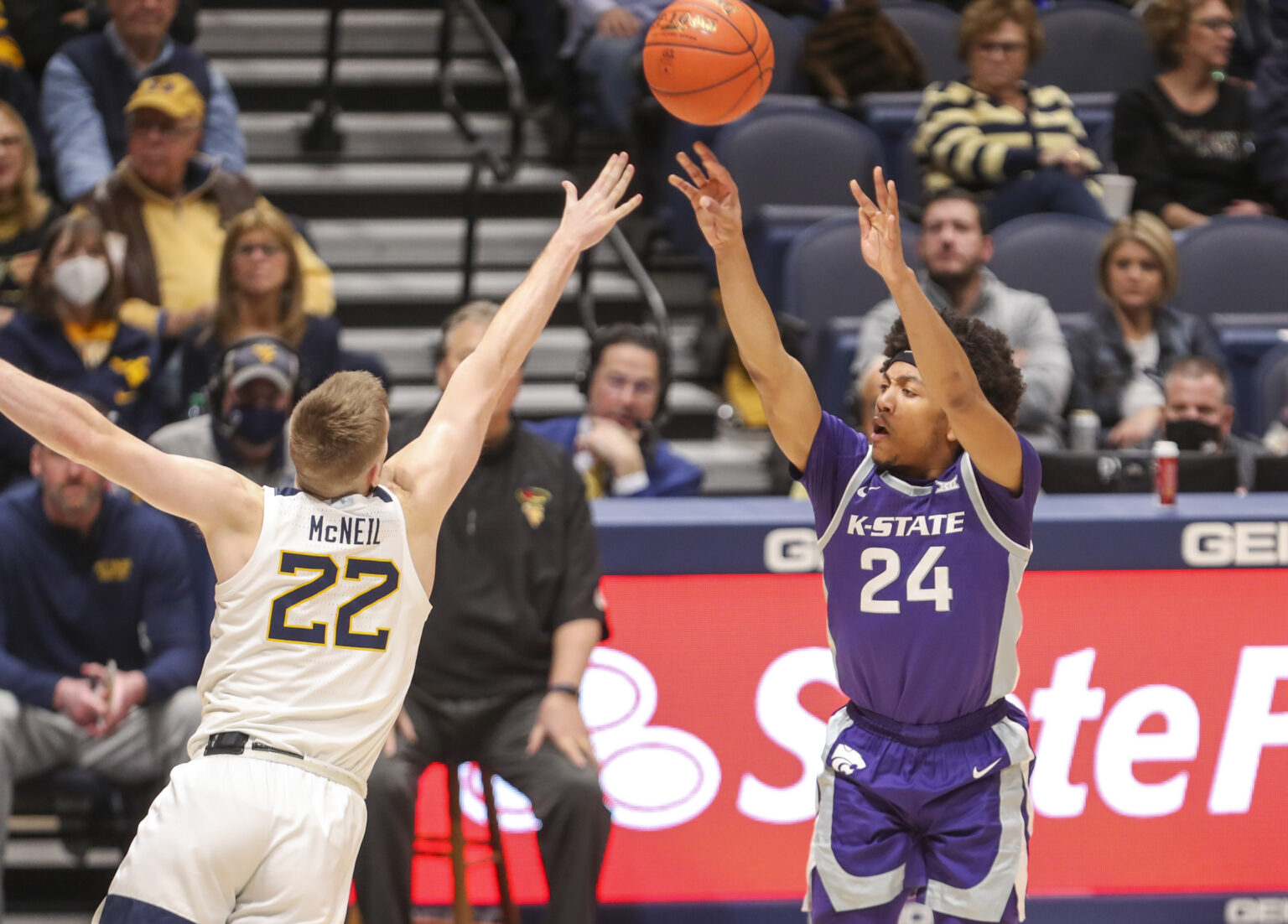 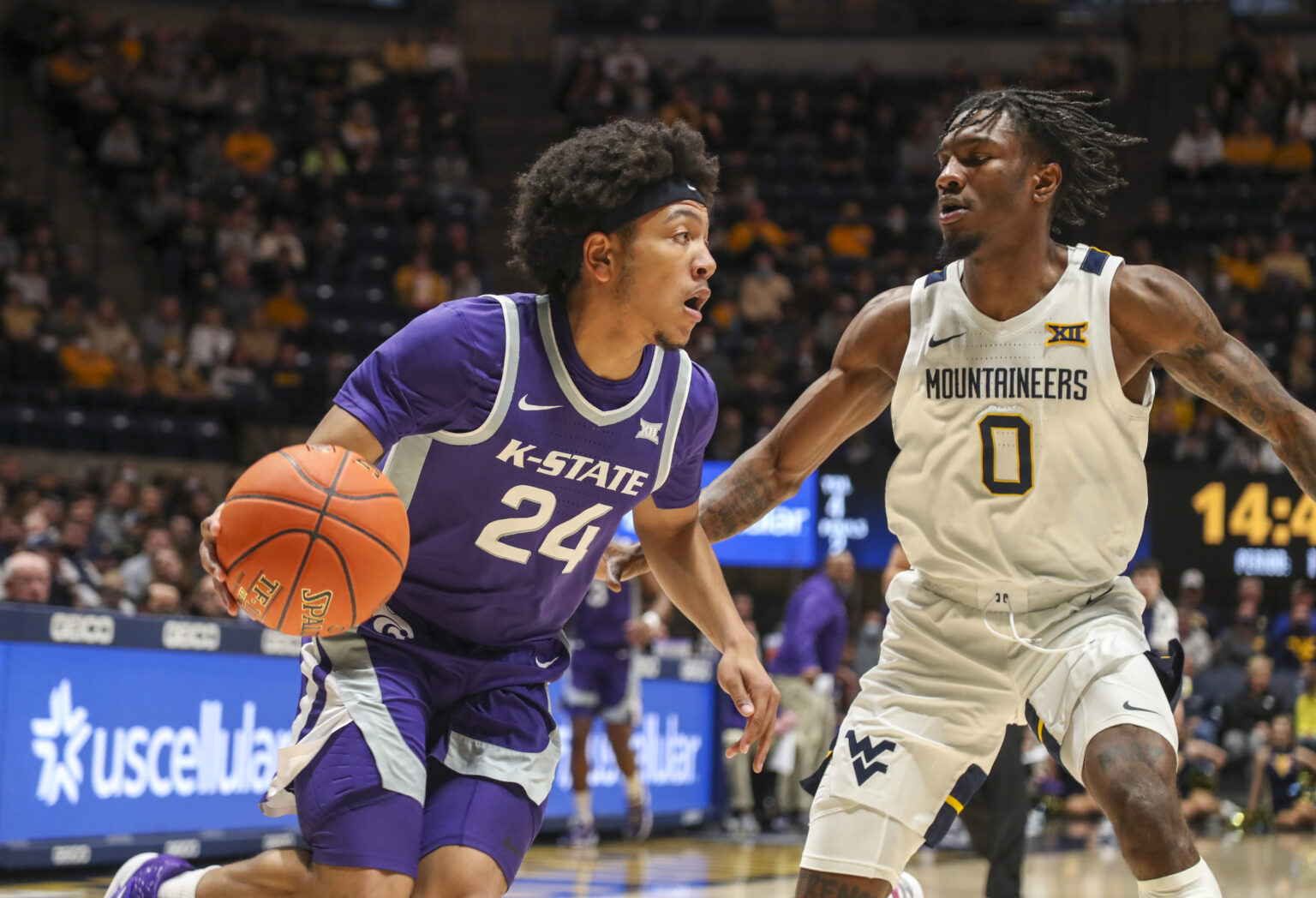 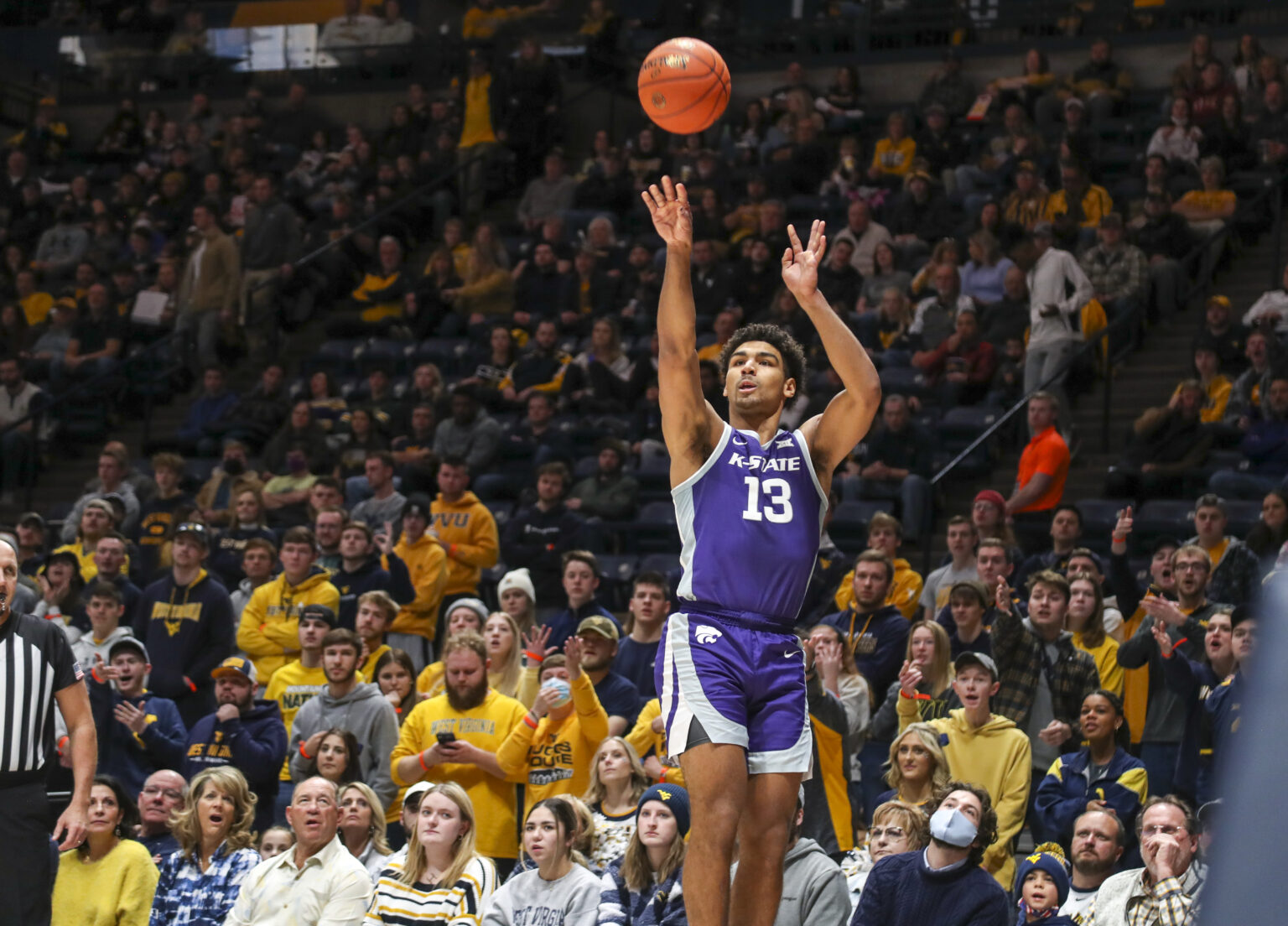 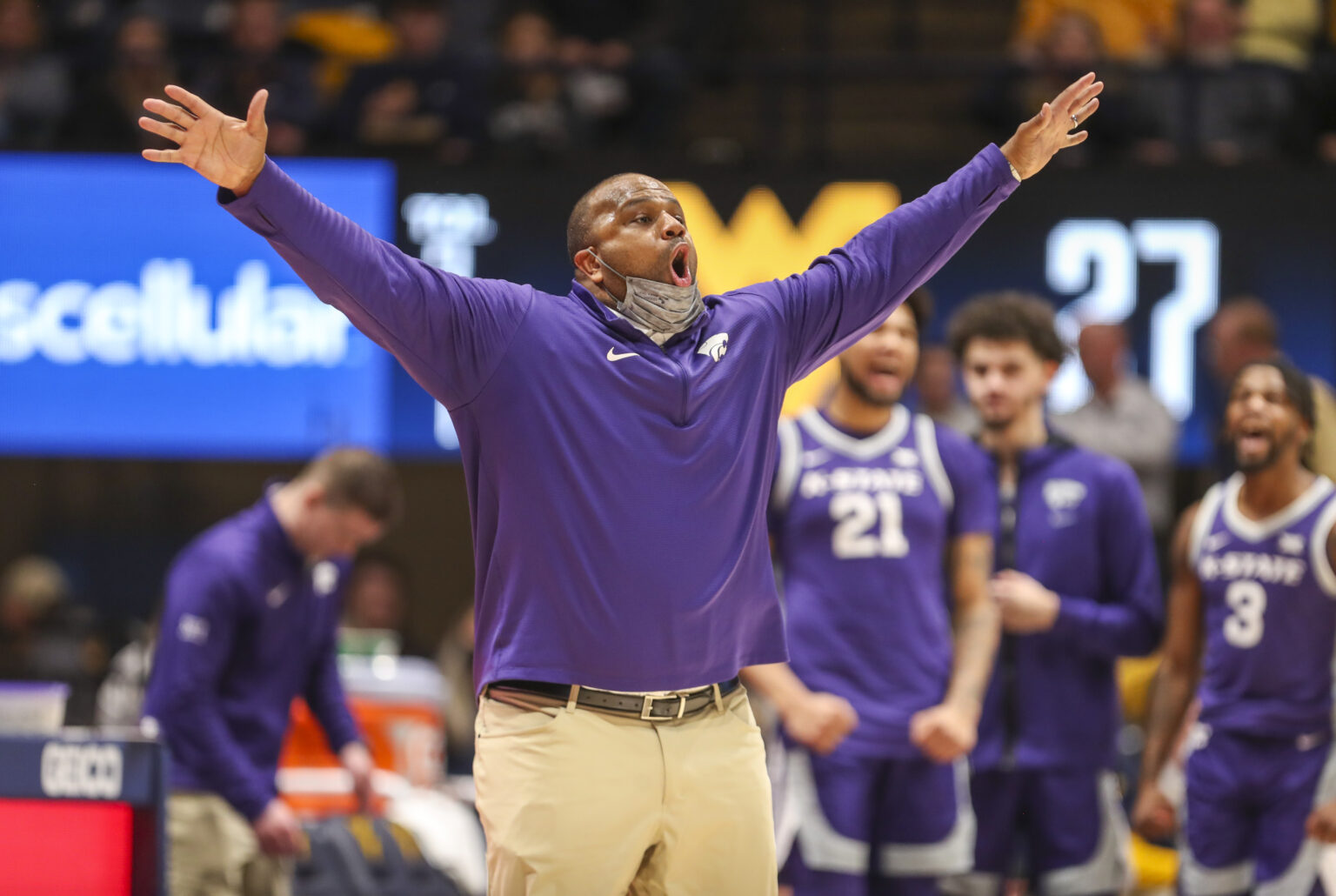 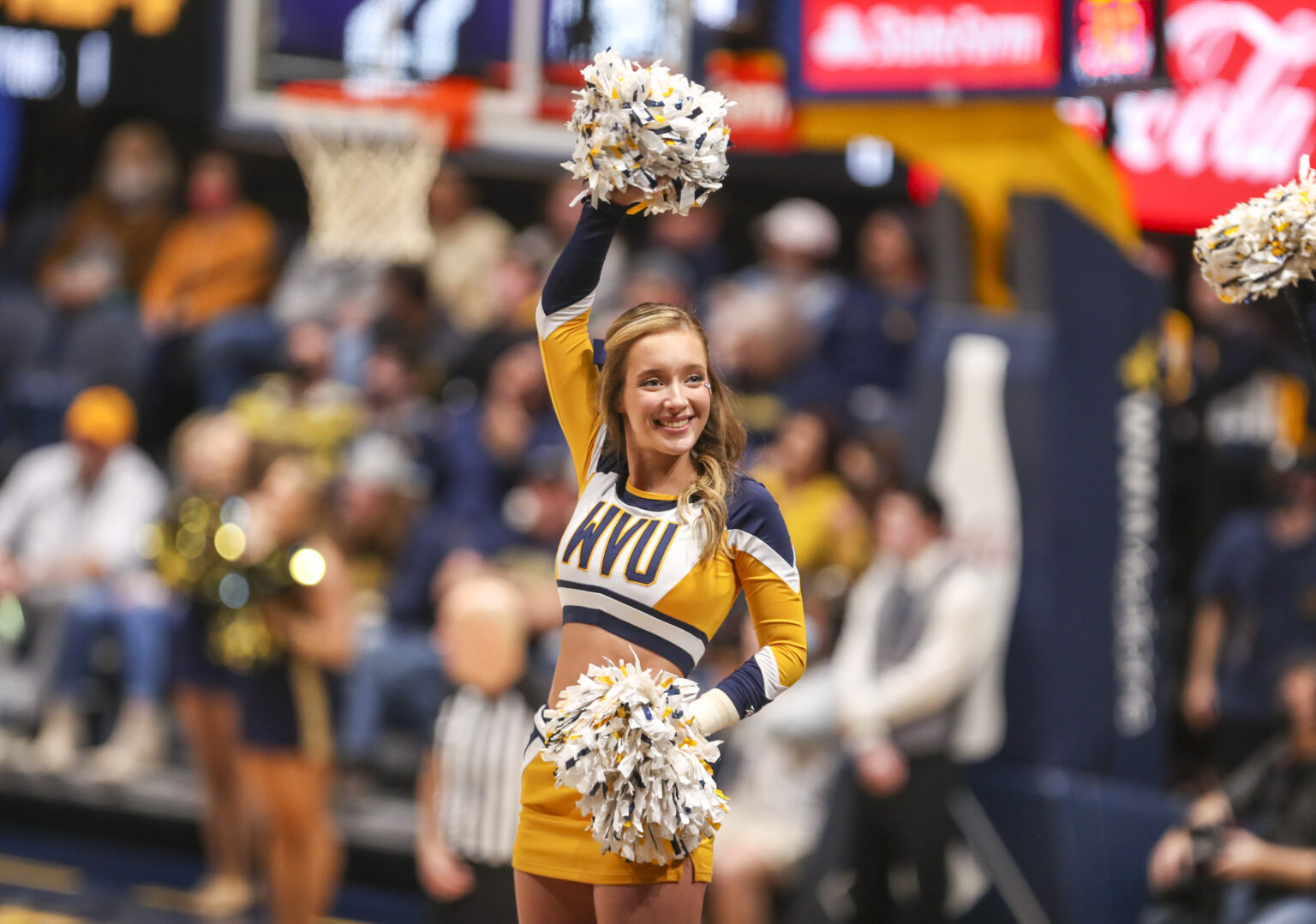 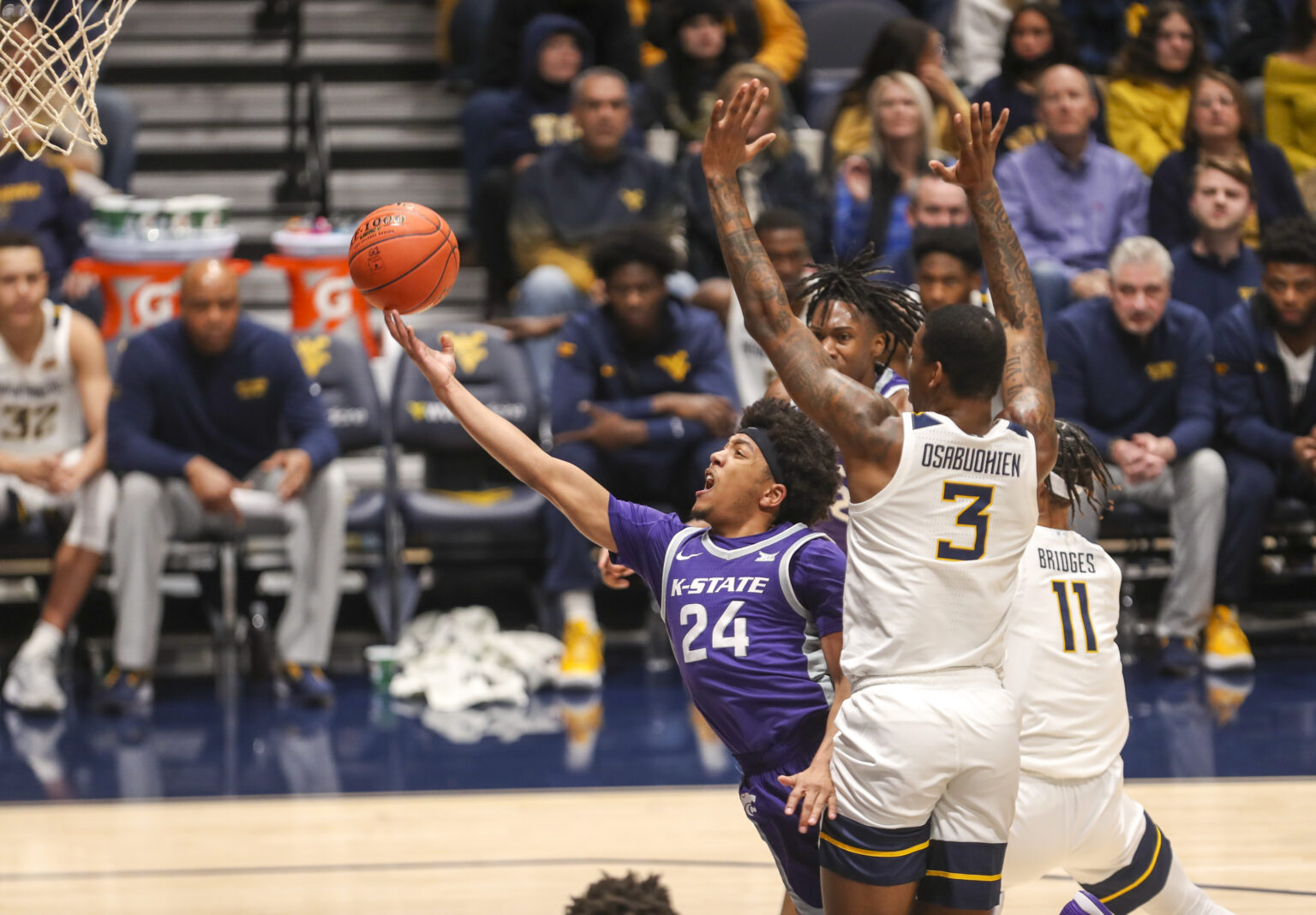 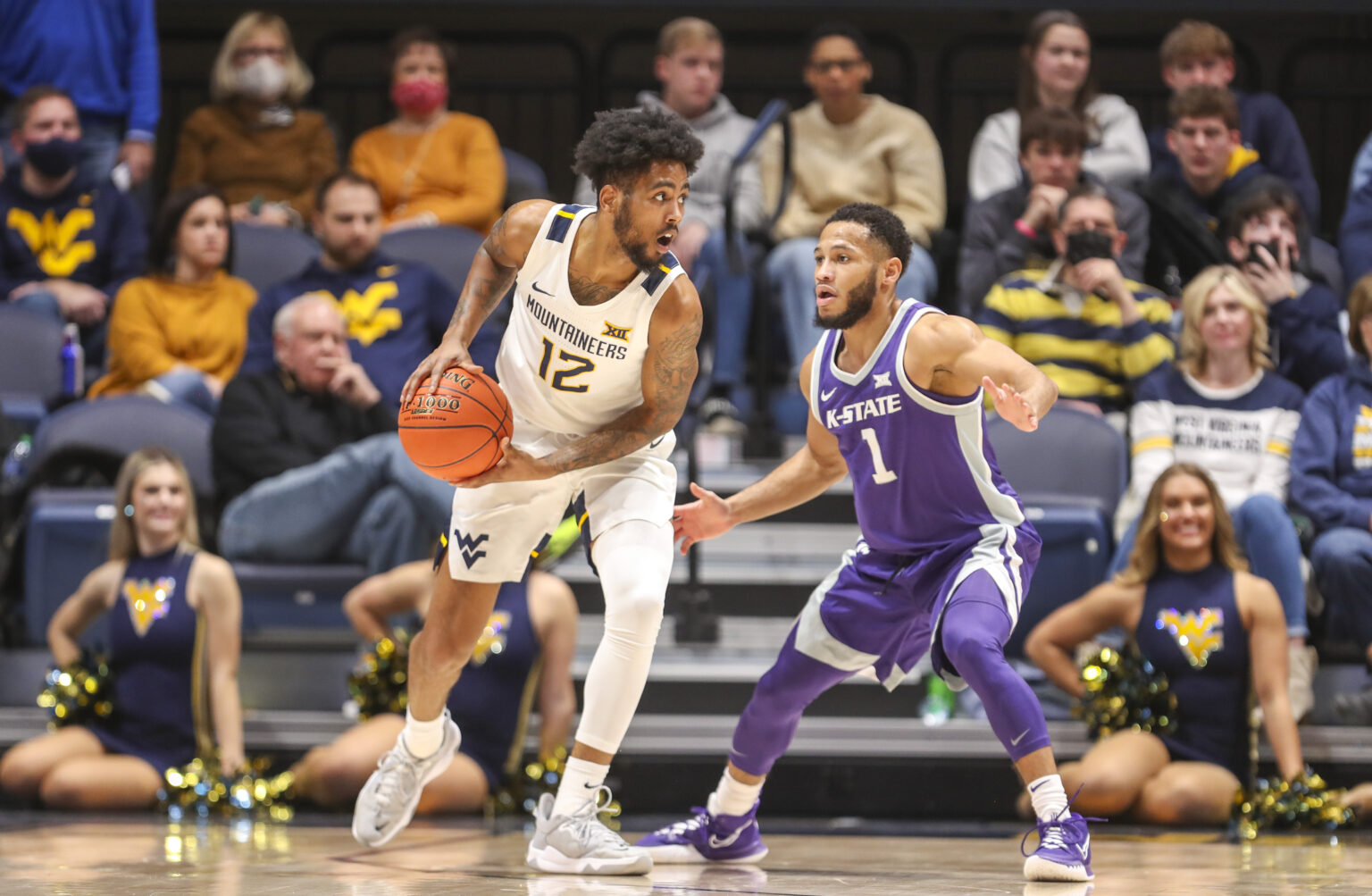 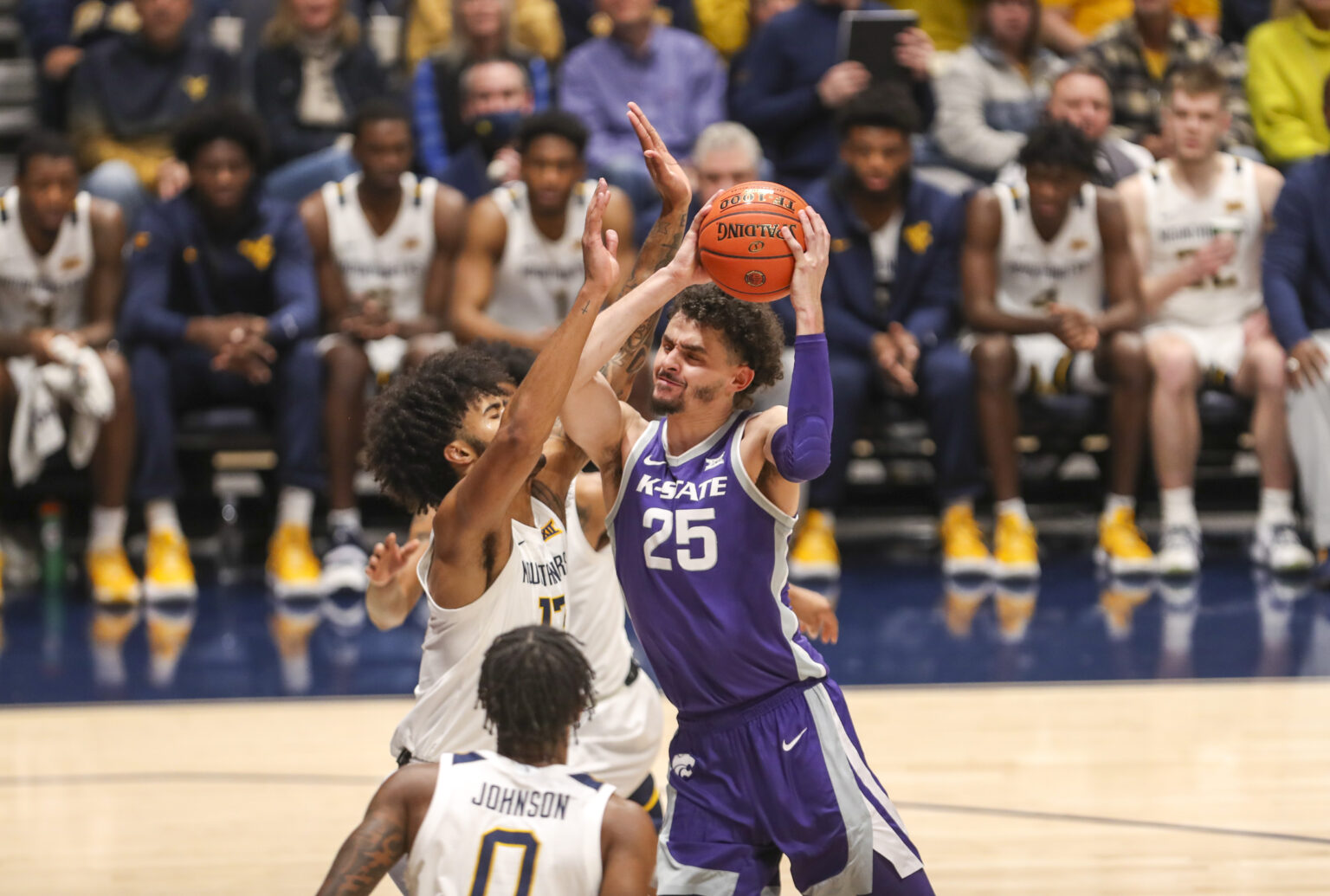 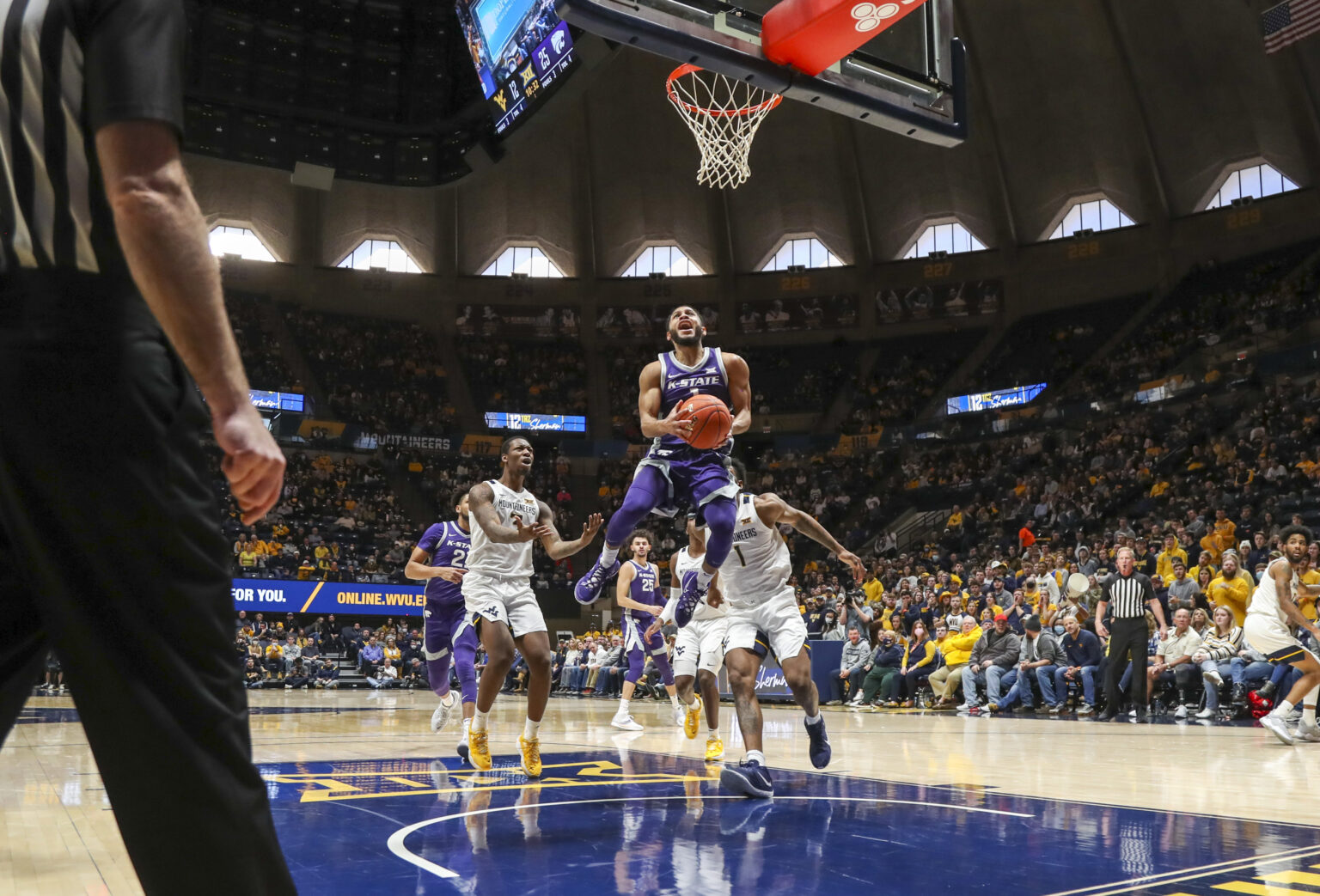 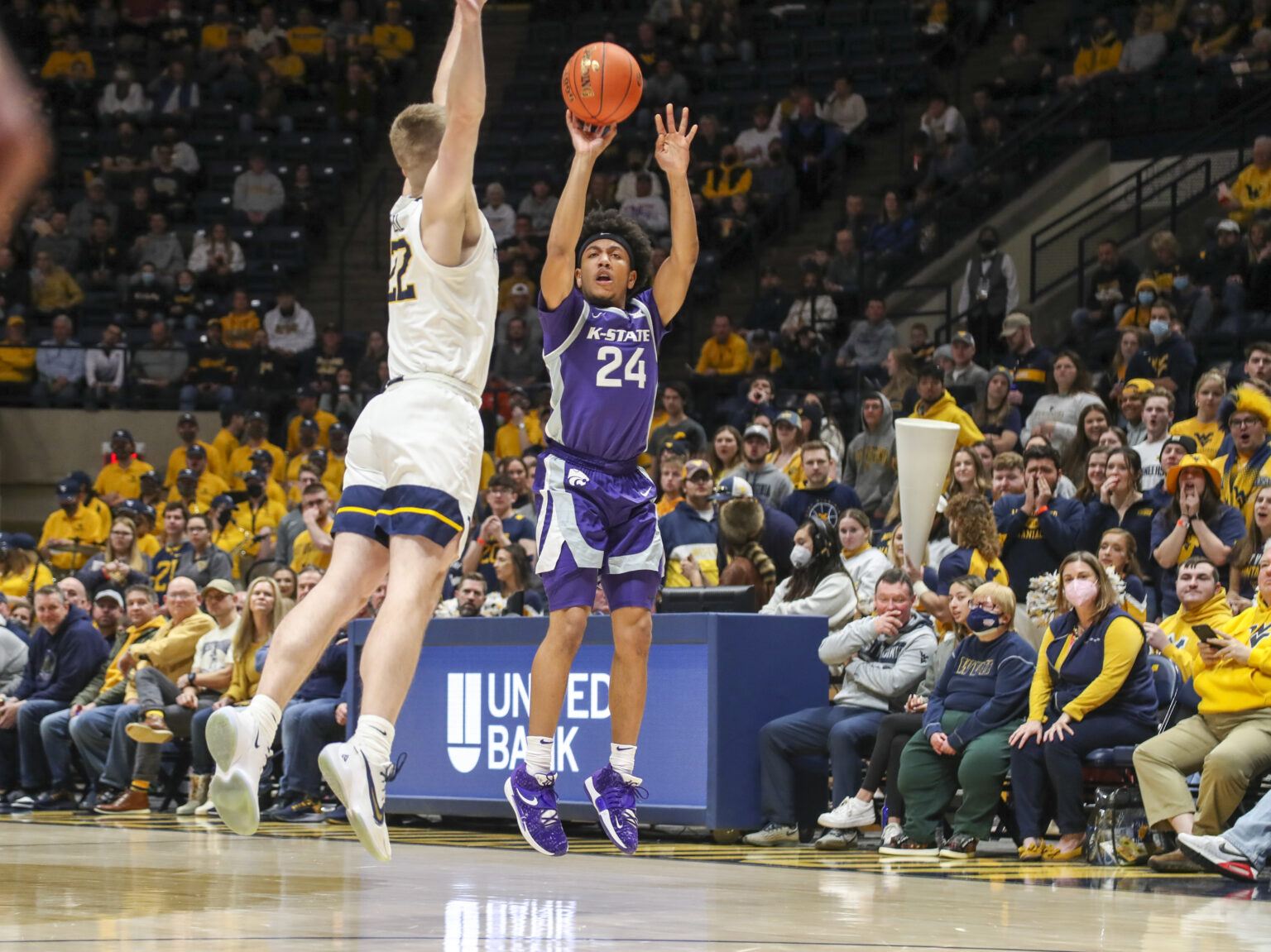 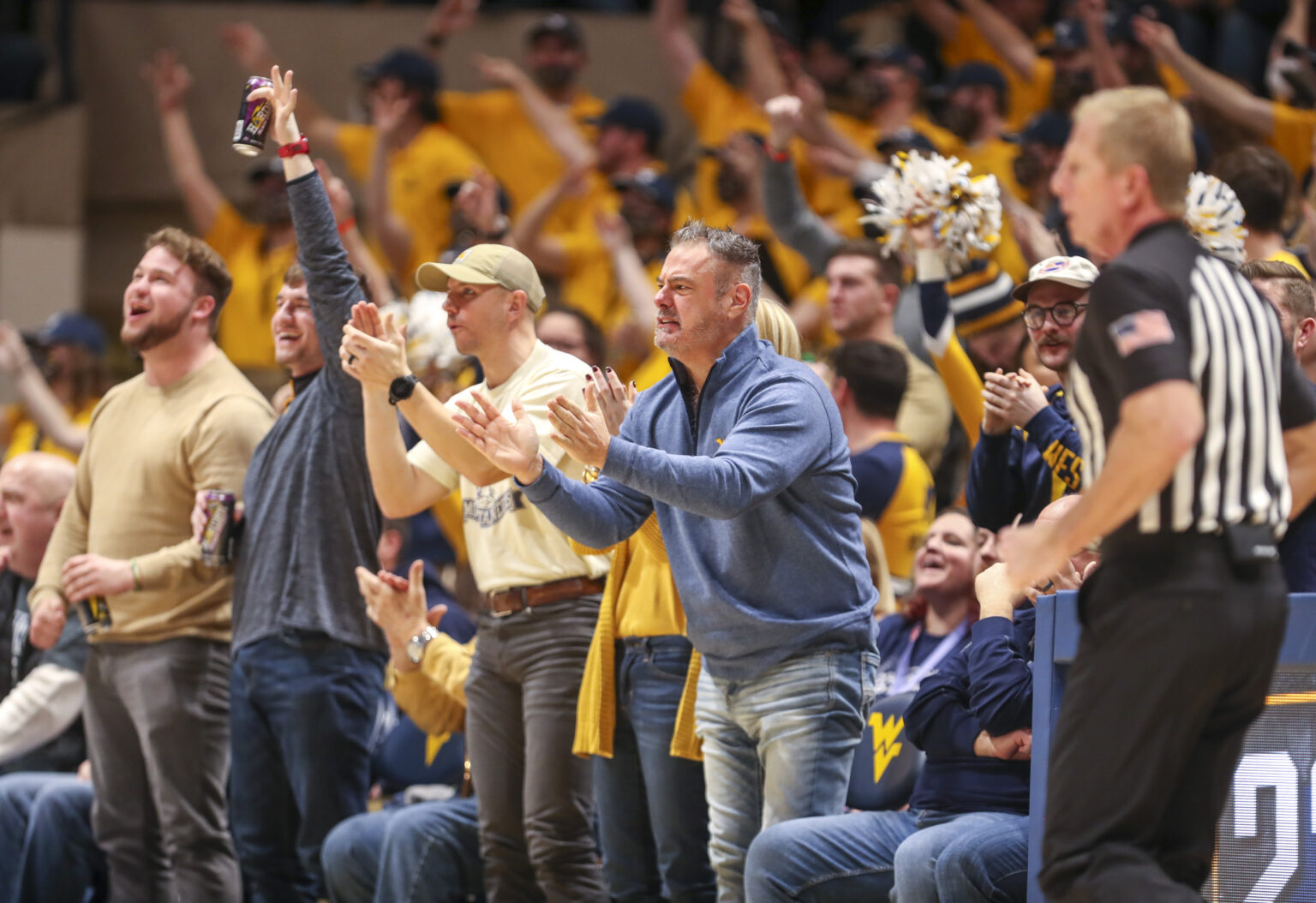 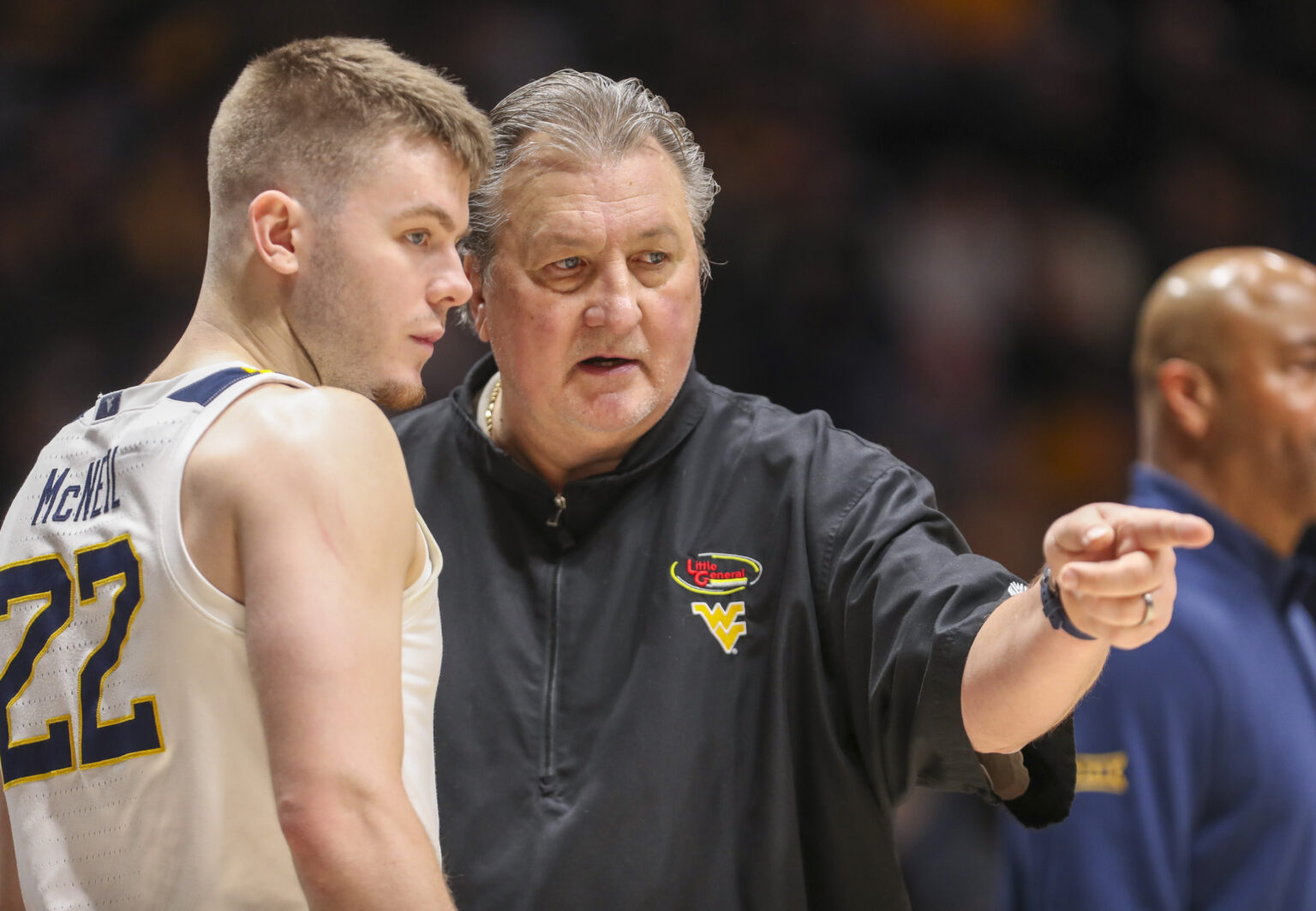 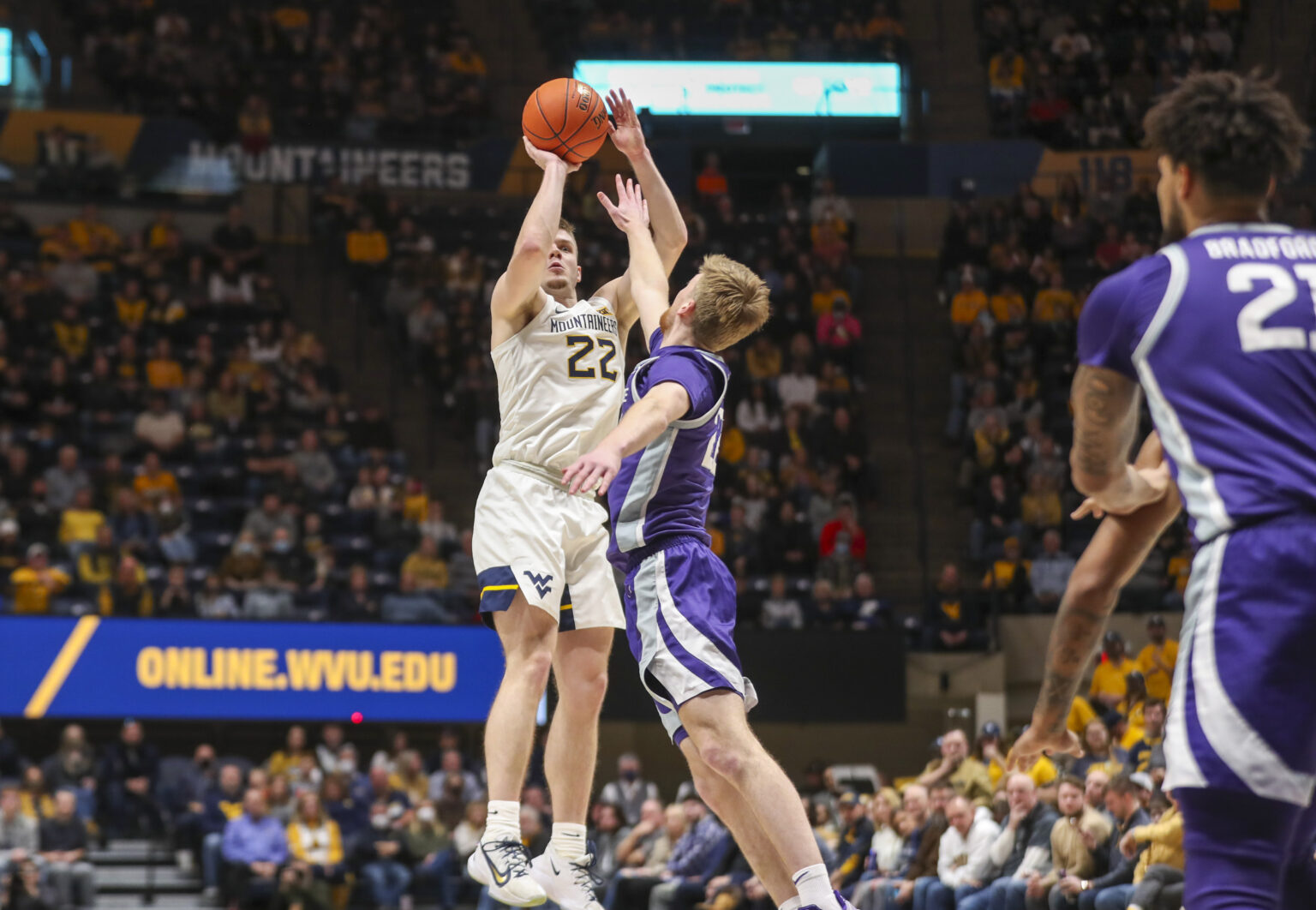 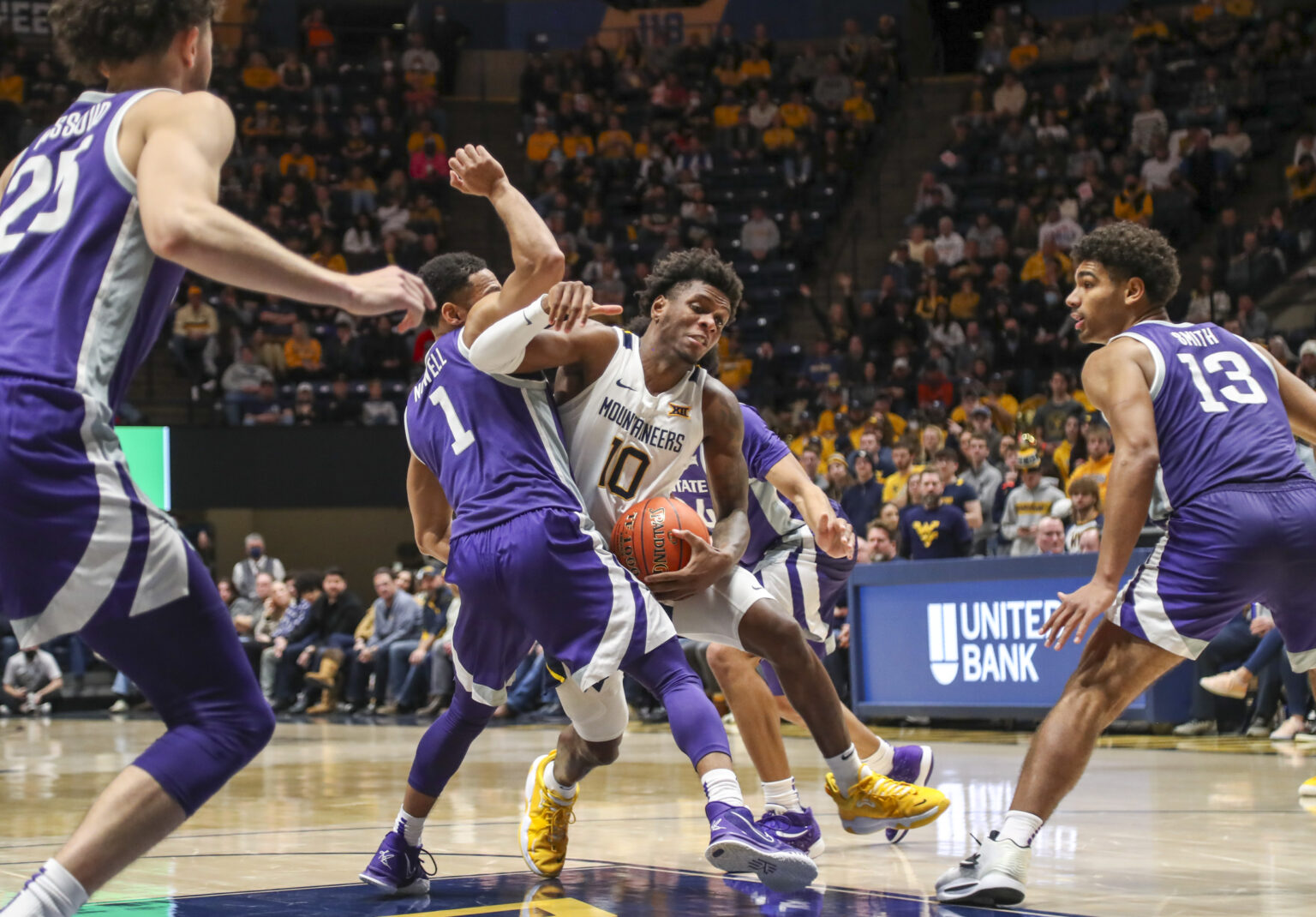 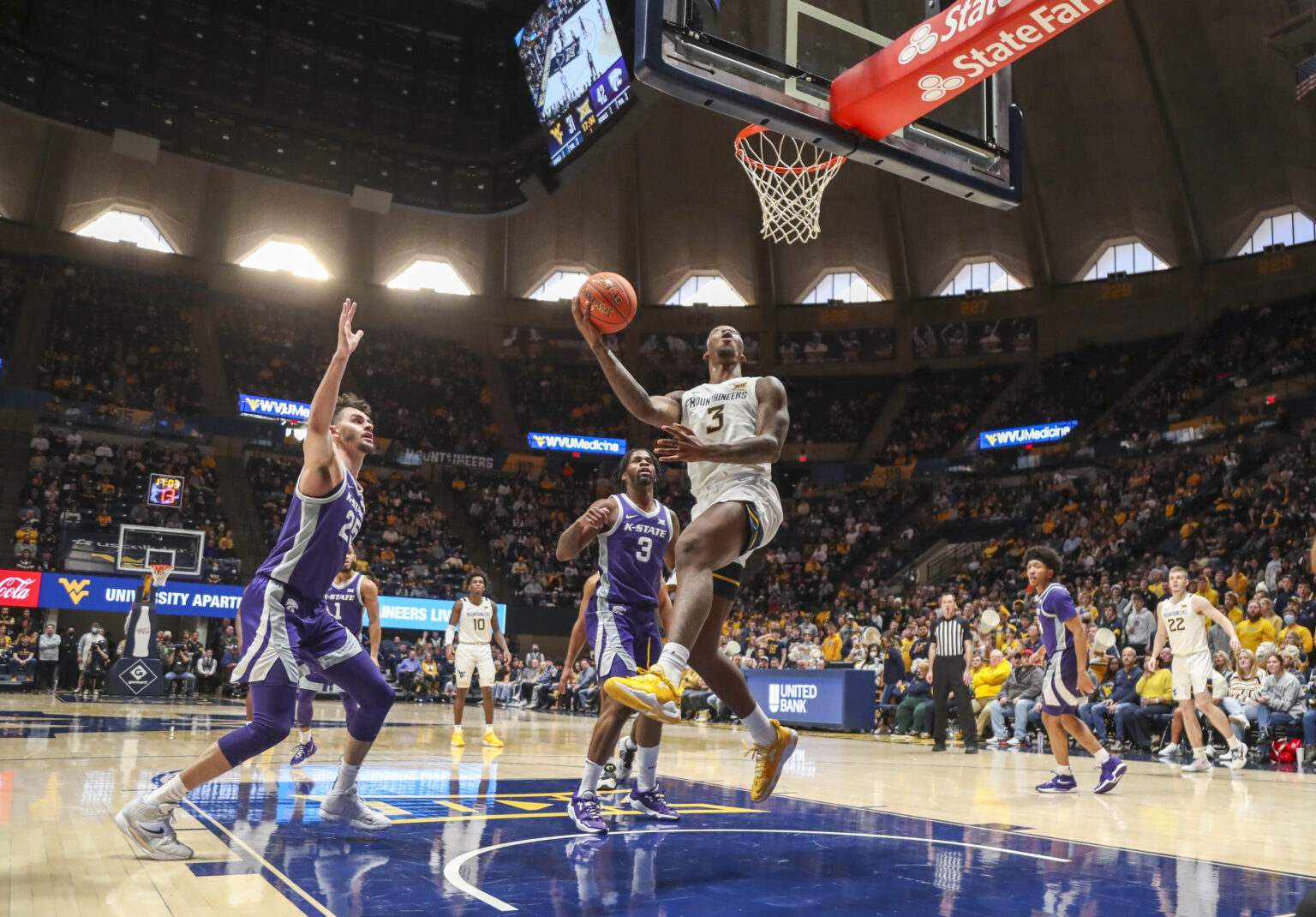 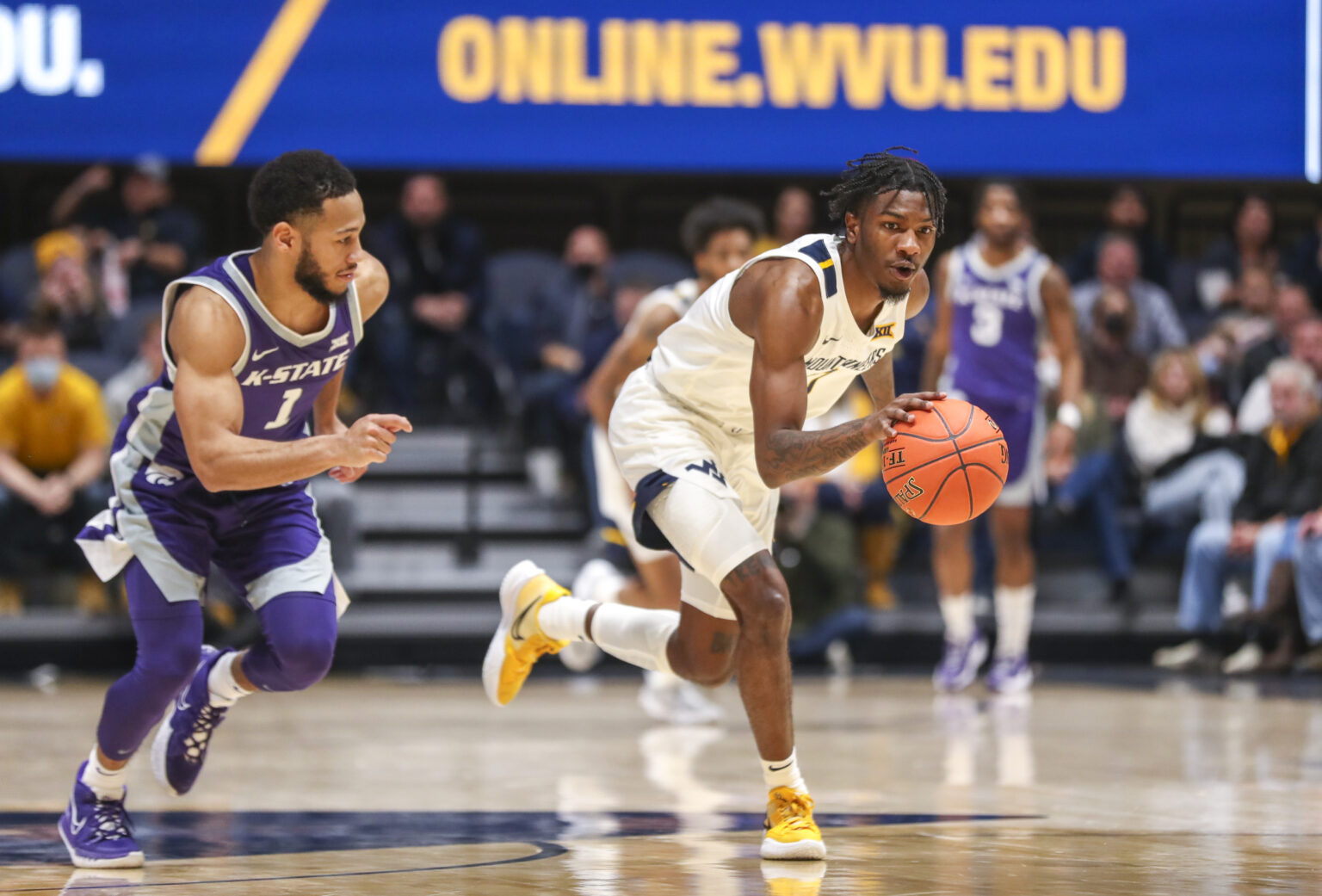 MORGANTOWN, W.Va. — West Virginia has made a habit of playing better in the second half since its victory over Kent State on December 12. It was the case in each of the Mountaineers’ three most recent wins ahead of Saturday’s matchup with Kansas State, and following a lackluster opening 20 minutes, it was again needed to rally past the Wildcats.

Thanks in large part to guards Sean McNeil and Kedrian Johnson, West Virginia overcame a 13-point halftime deficit to notch its first win in Big 12 Conference play, 71-68, before 11,919 at the Coliseum.

“Just letting the game come to me. I have trust in my teammates and I know they have trust in me,” McNeil said. “I wasn’t trying to force. I knew they were probably going to be sucking air a little bit. Just glad we got the win. A huge comeback win for us.”

Johnson, known more for his defensive prowess, scored nine of his 11 points after halftime and made a pair of key free throws down the stretch.

“It’s no fear,” Johnson said. “It’s all about having confidence in yourself and being ready for those type of moments.”

Still, playing without head coach Bruce Weber, forward Kaosi Ezeagu and guard Mike McGuirl due to COVID-19 protocols, the Wildcats had a chance to tie the game as time expired, but Markquis Nowell’s off-balanced 3-pointer was off the mark.

Nowell’s shot came after Jalen Bridges sank two free throws for his only points of the game with 4 seconds remaining. With five team fouls, West Virginia could have fouled and forced Kansas State to take the ball out again, but opted not to.

“We trusted our defense,” WVU forward Gabe Osabuohien said. “We knew it was going to be a tough shot anyways. He shot a one-legged shot from just across halfcourt. We didn’t want to foul in that situation.”

Along with the play of McNeil and Johnson, a defensive resurgence sparked the second-half rally for WVU, which improved to 12-2 overall and 1-1 in league play.

The Mountaineers allowed Kansas State (8-6, 0-3) to score only two points over the first 5-plus minutes of the second half. The Wildcats’ scoring drought of longer than 4 minutes early in the half allowed WVU to turn a 42-29 deficit into a five-point game after Johnson’s driving layup with 15:58 remaining.

“There’s not a 14-point play, so it’s just trying to get multiple stops in a row to give yourselves a chance in the game,” McNeil said.

After trailing for the entirety of the opening half, WVU pulled to within two on three separate occasions before tying the game at 50 when McNeil scored in the paint with 9:09 left.

McNeil’s triple 34 seconds later gave the Mountaineers their first lead, but it was answered by a 3 from K-State’s Nijel Pack.

Taz Sherman, WVU’s leading scorer this season and one of three Mountaineers to miss last Saturday’s loss at Texas due to COVID protocols, scored all six of his second-half points on consecutive 3s in a span of 59 seconds, allowing the Mountaineers to lead 59-53.

“He makes those two big shots and those are hard shots,” WVU head coach Bob Huggins said. “He makes them like, ‘OK guys, here get on my back.’”

After Osabuohien drew a charge, McNeil’s jumper stretched the lead to eight, but the Wildcats answered with a 7-1 spurt and Selton Miguel’s layup with 3:53 to play cut WVU’s lead to 62-60.

McNeil’s fourth and final triple of the game allowed West Virginia to expand its lead to five, though Pack’s triple with 2:20 remaining made it a two-point margin again.

Kansas State got the ball back with a chance to tie or take the lead, but Isaiah Cottrell came up with a timely block, and two McNeil free throws allowed the Mountaineers to double their lead with 1:24 remaining.

Nowell scored inside to make it 67-65,  but Johnson answered with two free throws.

Ismael Massoud’s 3 dropped through with 5 seconds left to set the stage for the ending to be played within one possession.

“Keddy [Johnson] and JB [Bridges] hitting those free throws were probably the biggest buckets of the game,” McNeil said.

The Wildcats made 9 of 19 from beyond the arc in the opening half to build a double-digit lead. Their largest advantage was 23-6, and though WVU cut its deficit to 33-25 at one point, Mark Smith scored seven points over the final 2:51 of the half to send K-State into the intermission with the 40-27 advantage.

“We had a lot more practice sessions for this game than what we normally do in a conference season, and I’m sure to a degree it’s going to be like that the whole year with the covid thing,” Huggins said. “We were awful to start the game. We had no enthusiasm, no bounce in our step. I didn’t feel very good about the start of the game before it started just looking at them. They were not the way they normally are before a game.”

Sherman, Osabuohien and freshman guard Kobe Johnson were unable to practice until Friday and saw their first game action since December 22.

Sherman scored 14 points, while Osabuohien led all players with 12 rebounds.

“Not being able to do anything for seven days was difficult,” Sherman said. “My life is so revolved around basketball that you don’t know what to do when you don’t have that.”

The Mountaineers outscored the Wildcats by 18 points in Osabuohien’s 28 minutes.

“I’m playing off hunger and energy,” Osabuohien said. “When we get a big play, especially when we’re down, I’m trying to bring some energy to the team and take a charge or little plays here and there that amp up the crowd and give our team energy.”

Cottrell made only 3-of-11 field goal attempts, but blocked three shots.

Reserve point guard Malik Curry scored four points in 18-plus minutes, but left the game with 11:11 left with appeared to be a right ankle injury.

“He was limping down the hallway on crutches the last time I saw him,” Huggins said. “He’ll play unless it’s broken.”

K-State made only 11-of-36 shots in the second half. Pack’s 20 points were a team high, while Smith had 14 points and eight boards. Nowell registered a double-double of 10 points and 10 assists, while Massoud scored 13 points in the Wildcats’ third straight setback to begin Big 12 play.

In their last four victories, the Mountaineers have outscored their opponents in the second half by an average of 16 points.