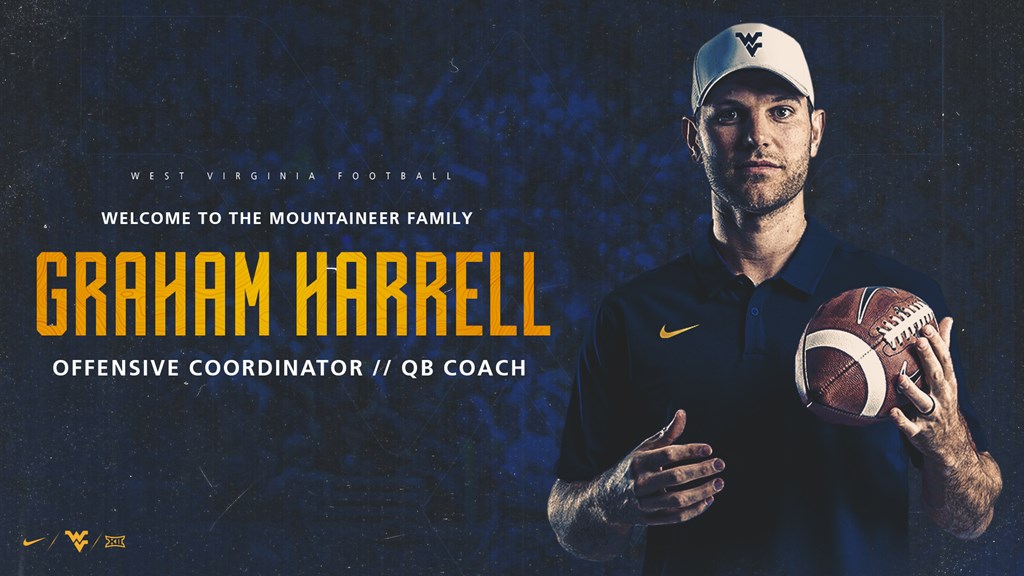 The 36-year-old Harrell comes to Morgantown after a three-year stint as offensive coordinator and quarterbacks coach at University of Southern California.

“I have followed Graham’s playing and coaching career for quite some time, and there’s no question he is a talented coach with a bright future,” Brown said in a school release. “He has a successful track record as a play caller, has done an outstanding job of developing quarterbacks and is a proven winner. His character, competitiveness and positive energy is a great fit for our program. He brings Power 5 coaching experience and an extensive knowledge of the Big 12. I know he is looking forward to getting started, meeting our staff and players.”

Brown continued to say he recognized change was needed for an offense that ranked 88 among 130 teams in scoring at 25.2 points on average, a number greatly aided by 66 points against Long Island of the FCS, which finished 2-8.

Excluding that game, WVU averaged fewer than 22 points and was held to 20 or less in six of 13 games.

“Since the end of the season, I have spent time reflecting on the program, and take responsibility, knowing we have to be better offensively,” Brown said. “I’ve been serving in a dual role as the offensive coordinator and head coach, and we need to bring in another voice for the offense. Having Graham as the offensive coordinator and working with Gerad as the No. 2 lead in the offensive room, as he has done, will make us a better, more-efficient offense and move us in the direction we need to head. In turn, that will allow me to be a more effective CEO of the Mountaineer football program.”

In his interview on Statewide Sportsline Monday evening, Brown pointed to the struggles the Mountaineers endured against what he considers elite defenses in 2021 — Oklahoma, Baylor, Iowa State, Oklahoma State, Kansas State and Minnesota — as a major reason for bringing in Harrell and lessening his role overseeing the offense.

WVU went 1-5 in those six games and outside of its 38-31 win against Iowa State, the Mountaineers combined for 59 points in the five losses.

“For the first time in my career, when I look at it, I say, ‘We just haven’t been good enough offensively.’ I’ve been serving dual roles,” Brown said. “It’s been my offense and our lack of production offensively is really on me.”

Harrell’s first season at USC was 2019, one that saw the Trojans display significant offensive improvement as they set school records in passing yards (4,365), completion percentage (71.0), completions (365) and attempts (514).

“I am excited to join Neal Brown’s staff at West Virginia and become a part of the Mountaineer football program,” Harrell said. “This program has a long and successful history with a lot of tradition, and I have so much respect for the state of West Virginia, its people and their values. I believe this is a great fit for me and my family as Neal and I know or have worked with a lot of the same people. I grew up in the Big 12, played in it, and I look forward to getting back to competing in it. I can’t wait to get to know our players and help this program make its mark.”

Monday’s announcement from Brown did not mention Sean Reagan, who recently wrapped up his third season as WVU’s quarterbacks coach.

Brown also said on Sportsline that the offense’s struggles should not fall on Parker, who he considers “the best receivers coach in the country.”

Harrell was the outside receivers coach at Washington State in 2015, which came one year after he was an offensive analyst for the Cougars.

Brown pointed to Harrell’s success at multiple stops and different levels while utilizing different offenses as a key factor in his hiring.

“The thing I really respect about Graham is he came up in the Mike Leach Air Raid,” Brown said. “Then he went to North Texas and that’s really a balanced attack. They played with a tight end, ran the football and they were able to hit explosive plays. He goes to USC and really uses his personnel. They had elite wide receivers and it was a tough situation with an interim coach, but they performed very well and he played in a ton of 12 personnel with two tight ends.”

Prior to his coaching days, Harrell was a record-setting quarterback at Texas Tech from 2005-2008. He finished with an NCAA-record 134 touchdown passes and the second most career yards in NCAA history at 15,793. Harrell also amassed the third-highest passing average at 351 yards.

Harrell was honored in 2018 as a first-team All-American and finished fourth in the Heisman Trophy voting. He played three years with the Green Bay Packers (2010-12) and was a member of the 2010 Super Bowl XLV championship team, before a brief stint with the New York Jets in 2013.

In December, Kedon Slovis, one of two quarterbacks USC regularly used in 2021, announced his intention to transfer to Pitt. The other signal-caller to see major action for the Trojans, Jaxson Dart, entered the NCAA’s Transfer Portal on Monday.

The Trojans hired Lincoln Riley from Oklahoma as their next head coach in late November.

With Riley bringing in his staff of choice, it meant Harrell was available.