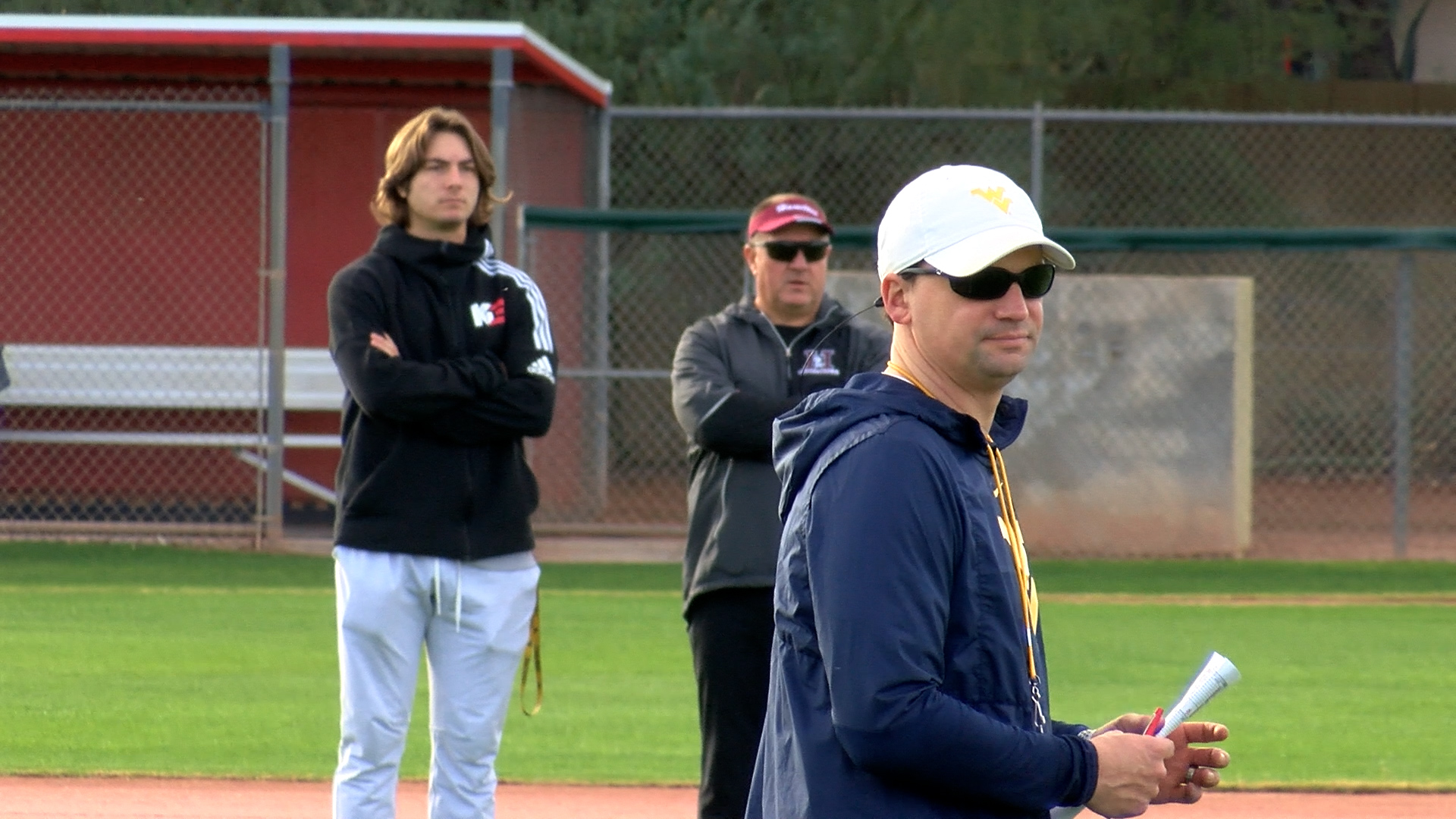 MORGANTOWN, W.Va. — Two weeks have come off the calendar since the Mountaineers were defeated by Minnesota, 18-6 in the Guaranteed Rate Bowl. In that span of time, WVU has lost quarterback Jarret Doege, defensive back Jackie Matthews and receivers Winston Wright and Sean Ryan to the transfer portal. Also, tight ends coach Travis Trickett departed for South Florida.

On the plus side, WVU retained two of their top defensive players in Dante Stills and Josh Chandler-Semedo for fifth seasons and added offensive coordinator Graham Harrell from USC.

That latest move came on Monday and in a wide-ranging interview on MetroNews Citynet Statewide Sportsline, head coach Neal Brown detailed why Harrell was selected to lead the Mountaineer offense in 2022.

“His playing career speaks for itself. He’s a Heisman Trophy finalist and an All-American. He played in the NFL and was the backup to Aaron Rodgers, who is playing quarterback now at the best level of anyone in the world. And he sat with him for three years. Then he is the coordinator at North Texas for a very good friend of mine in Seth Littrell. Then he goes out to USC and the bright lights and he still was very productive,” Brown said.

“When he was available, I thought it was a great opportunity to bring an expert that can not only extend our offense, make us better and give us a chance to win against those elite level defenses, but also someone that is a proven developer of quarterbacks and a proven recruiter of elite quarterbacks.”

Harrell’s arrival in Morgantown will signal a dramatic shift in the gameday operation of the Mountaineer offense. Brown will no longer have the double responsibility of offensive coordinator and head coach. Those are roles he has simultaneously held going back to his days at Troy.

“Honestly, it is a tough pill for me to swallow. Because that’s really how I came up in the game, offensively. Going back to getting the offensive coordinator job in 2007 and calling plays from the 2008 season on. That’s never been an issue. For the first time in my career as I look at it, I said, ‘Hey, we have just not been good at it and good enough offensively’.

“I have been serving dual roles. I have not only been the head coach but I have been the offensive coordinator. It has really been my offense. Our lack of production offensively is really on me.”

With Harrell assuming many of Brown’s day-to-day responsibilities on offense, Brown will adapt to a different role.

“Today’s game is so much about relationships. I want to do a better job of coaching our coaches and building relationships with our players. Graham has his thoughts. He is going to sit with Gerad [Parker] and our staff and put together what we will look like going forward.

“You can’t be an elite offensive coordinator and an elite head coach at the same time. I want to be a better head coach. And to do that, I have to step away from the offense.”

Give and take in the transfer portal

Notable departures have dominated discussions in recent weeks. Four scholarship receivers and many other players on the two-deep have left WVU throughout the calendar year in 2021. Brown says about 66 scholarship players are now in the program and the Mountaineers will get close to the NCAA limit by the time the 2022 season begins.

The transfer portal continues to make headlines across college athletics. What are @NealBrown_WVU thoughts on the transfer portal? What positions will need to be filled before the season starts? He answers those questions and more to @TonyCaridi, @BradHowe07, and @HunterWvu88bgn. pic.twitter.com/17jM1lugyH

“We are going to play with the closest number that we have had to 85. Have we lost some guys? Yes. Winston Wright leaves, who had eligibility left. Then we had a couple other guys leave that were no surprises. They walked on Senior Day and we had a very good understanding that was their last game in the bowl game. They are using their COVID year and they want to use it somewhere else. Good for them.”

Jarret Doege took the first snap for the Mountaineers in their last 26 games. His tenure as a Mountaineer ended when he entered the transfer portal. Brown says Doege dealt with adversity well.

“Jarret weathered probably more negativity than I think is fair. But I thought he handled himself with class. He’s a great kid. He wants to play his last year, his super senior year at another place. And I think he should. I think it is the best opportunity for him. And I hope he finishes strong. And I hope as time passes that our fanbase has an understanding that he gave everything he had.”

Three scholarship quarterbacks remain as the Mountaineers pivot towards the 2022 season. Redshirt sophomore Garrett Greene [26 pass attempts, 48 rushes in 2021] is the most experienced of the trio.

“He is somebody that needs to make some strides. He played a little bit this year and had some ups and downs. He’s got to be more consistent. That is the word for him. He needs to continue to get bigger so he can withstand what goes through the kind of schedule we play with eleven ‘Power 5’ teams.”

The biggest question from now until September 3rd will be who is the starting QB. @NealBrown_WVU discusses the state of the QB room, and he provides his thoughts on Jarret Doege’s departure to @TonyCaridi, @BradHowe07, and @HunterWvu88bgn. WATCH: https://t.co/yCFQ3nDJuy pic.twitter.com/DWWAACajrX

“Goose is a guy we are excited about. He is a dual threat kid as well. He is calm, cool and nothing bothers him. He has great leadership skills. I am intrigued to see how he handles this winter and spring. And Nicco is one of the most high-profile recruits that we’ve had here in a long time, especially at the quarterback position.”

With up to eight scholarships available, Brown says adding another signal caller to the mix remains a possibility but not a necessity.

“I think we will be careful how we handle that over the next three to five days. But I am comfortable going into the spring and letting these three guys play out. We may have something here that we don’t know because none of them really have enough playing experience to say.”

Brown says the team will always be doing their due diligence in the transfer portal even if a player may not necessarily be in a position of need. There are a few areas the team will certainly address in the offseason.

“We need a kickoff specialist. I think that was something that hurt us last year that really brought all our special teams numbers down. That’s not a knock on Evan Staley. I love Evan Staley. What a comeback story that was. We really struggled in the second half of the season either not kicking the ball very deep or kicking the ball out of bounds.

“On defense, we are always looking for edge rushers. We need to add another veteran in the secondary and probably another young kid on the D-line, a high school kid. On offense, we have one more spot for an offensive lineman. At receiver, we could probably add one or two. That’s kind of where some of our needs are. We are in a position where we won’t turn down a great player.”

With the returns of Dante Stills and Josh Chandler-Semedo, WVU could welcome back six of seven starters on their front seven next season.

“Dante has made so much growth in the last year. Coming back, the next eight months are really going to be beneficial for him. Everybody forgets that he is a four-year player. He never redshirted. He missed a whole offseason with surgery. As a true freshman, he never went through that developmental process that most people do. So this is his fifth year. He is not taking a bonus year. This is his fifth year. In the next eight months, he is going to continue to change his body. His best was really good last year. We need him to be more consistent.”

“[Chandler-Semedo] is going to help us defensively but it is also going to help him from a professional standpoint to play another year at that spot.”

Travis Trickett launched his coaching career as a student assistant at WVU from 2003-2007 and he will soon be named the offensive coordinator at South Florida. Trickett spent the past three seasons on staff as the tight ends coach for the Mountaineers.

“He wanted to be able to call plays. I thought it was a great opportunity at a good place. He has an opportunity to make a jump where they have struggled. You have an opportunity to make significant gains there, both in the offense statistically and in the win column. I thought it made a lot of sense for him. He got the job on his own merits but I was fully supportive of him. Even though we hate to see him go, it is a great move.”

Nitro High School graduate and former Mountaineer offensive lineman Chad Snodgrass has served on the WVU strength and conditioning staff since 2014. On Monday, he was named the new Director of Sports Performance at Old Dominion.

“Chad played here. He loves West Virginia. He is a native and he has learned a great deal under Mike Joseph, who I think is the best in the country at what he does. But he had an opportunity to be the head strength coach at Old Dominion. Even though we hate to see him go, it is a great opportunity for him and his family.”