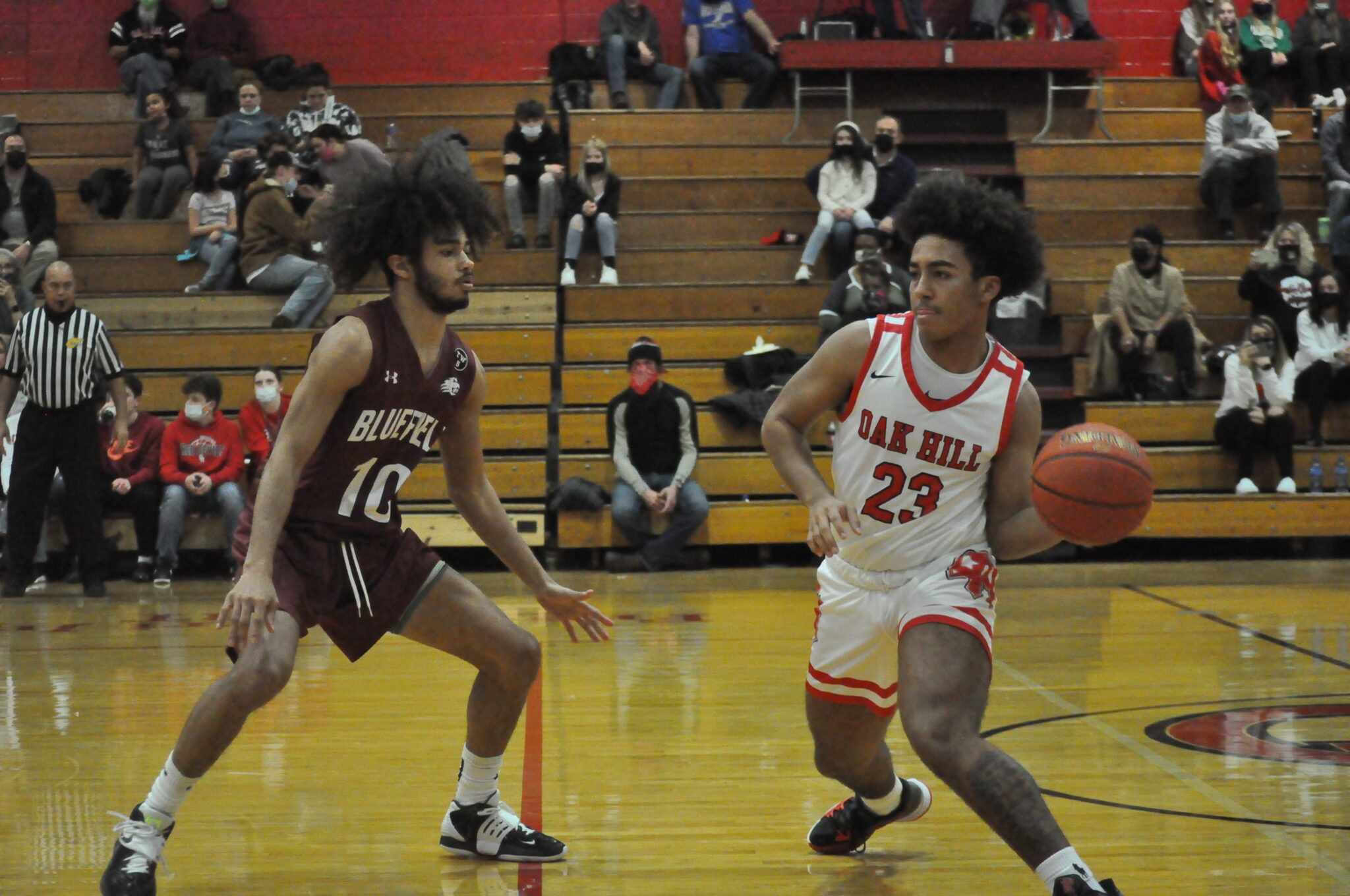 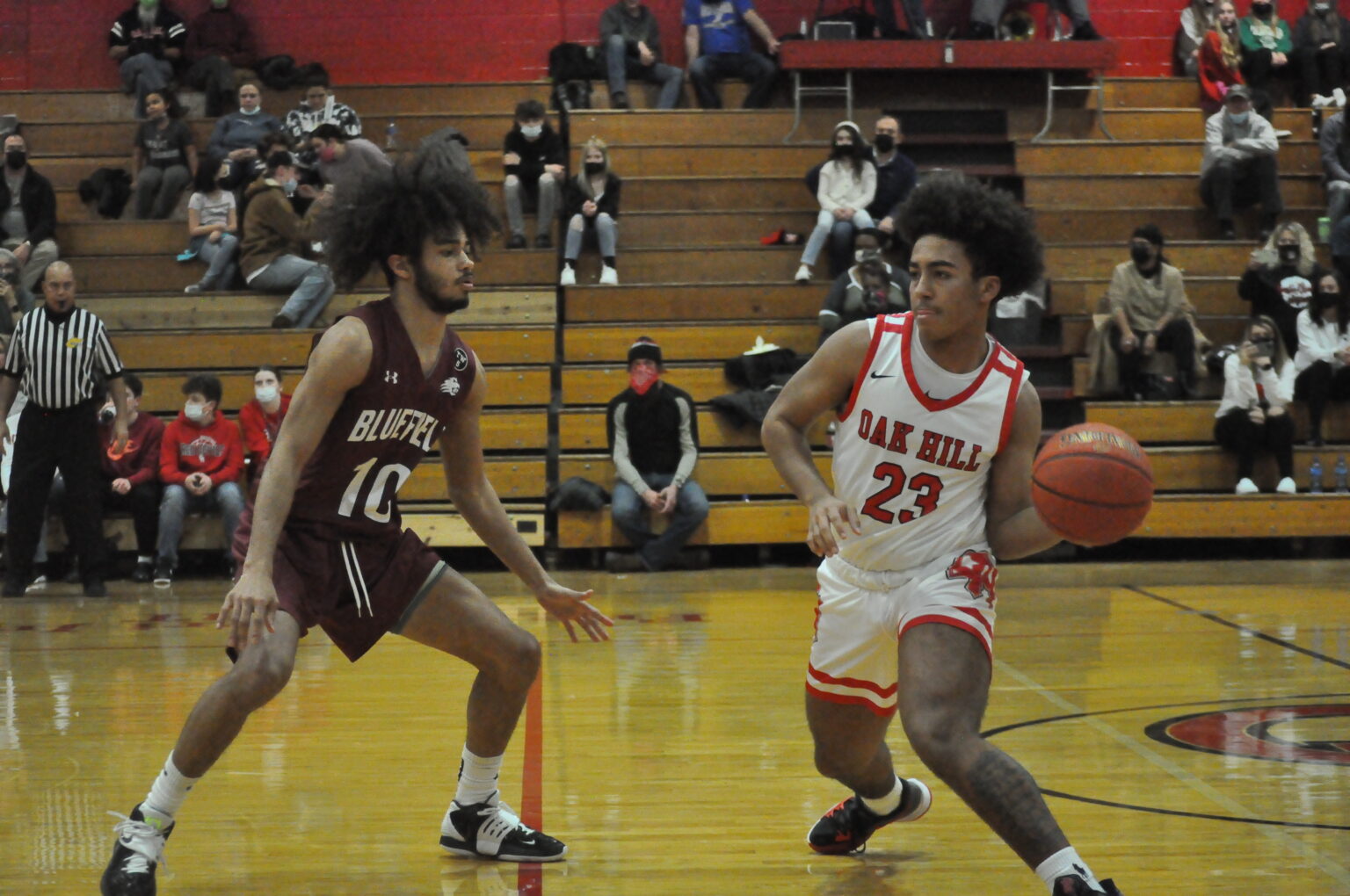 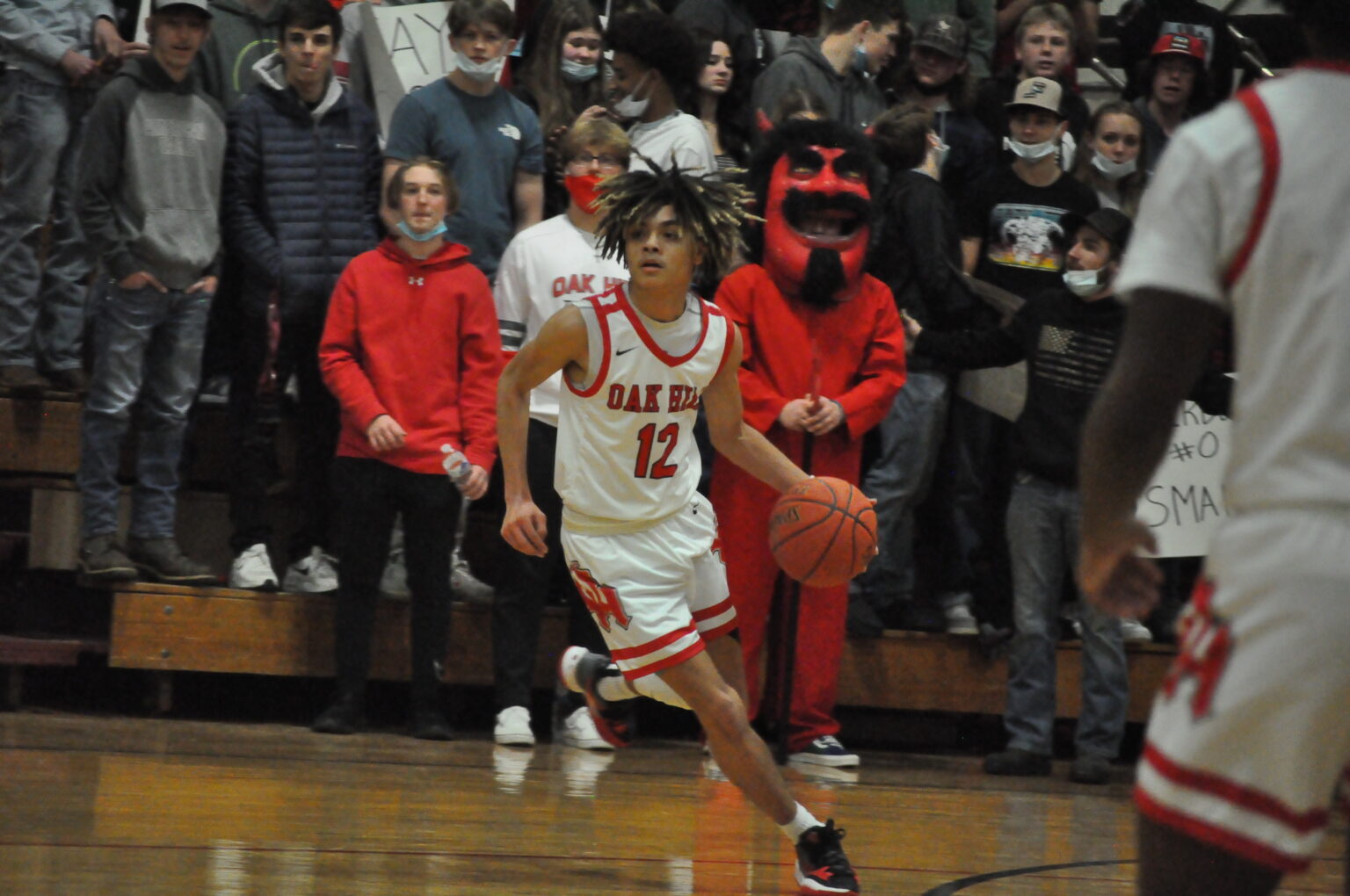 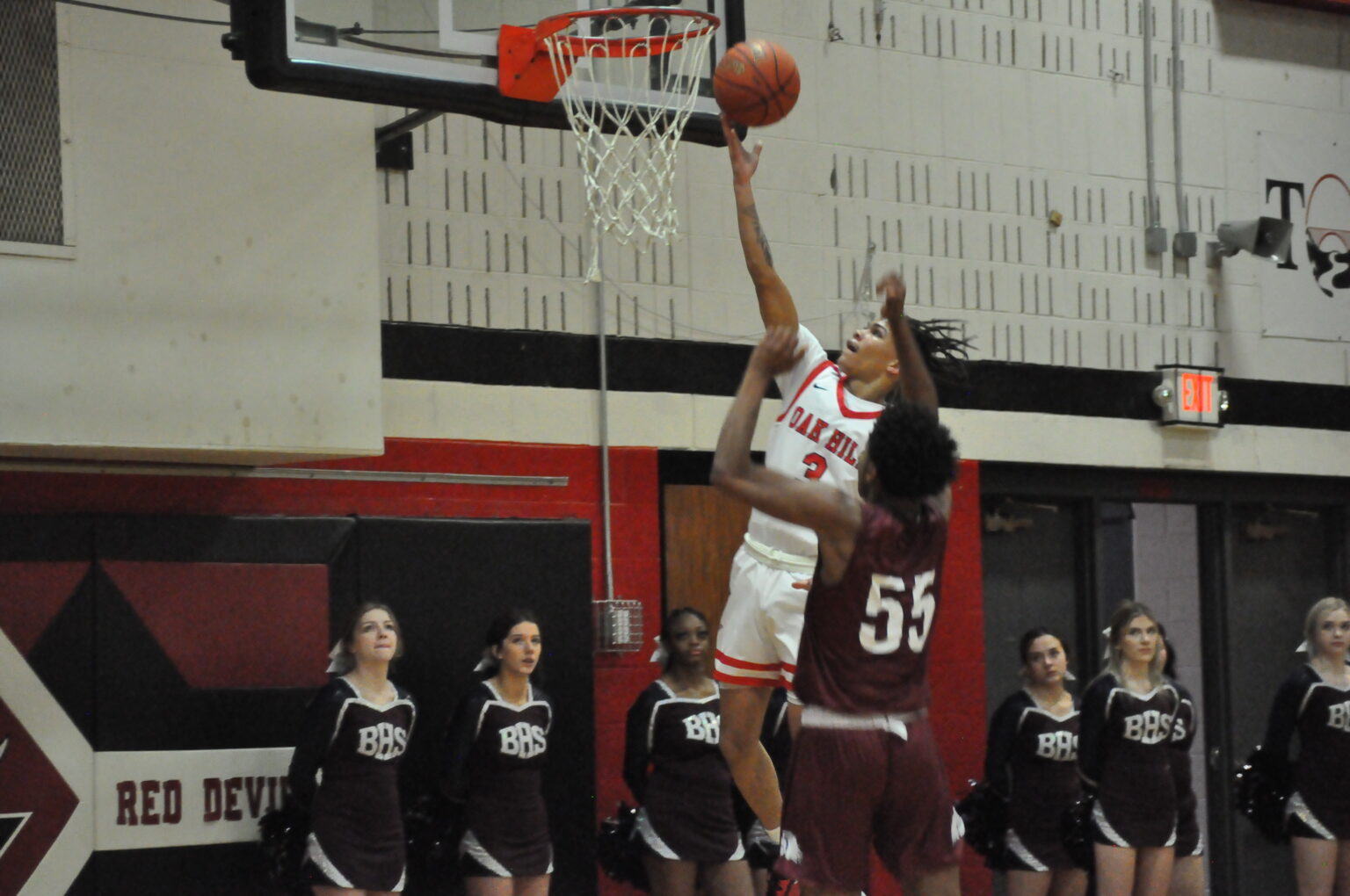 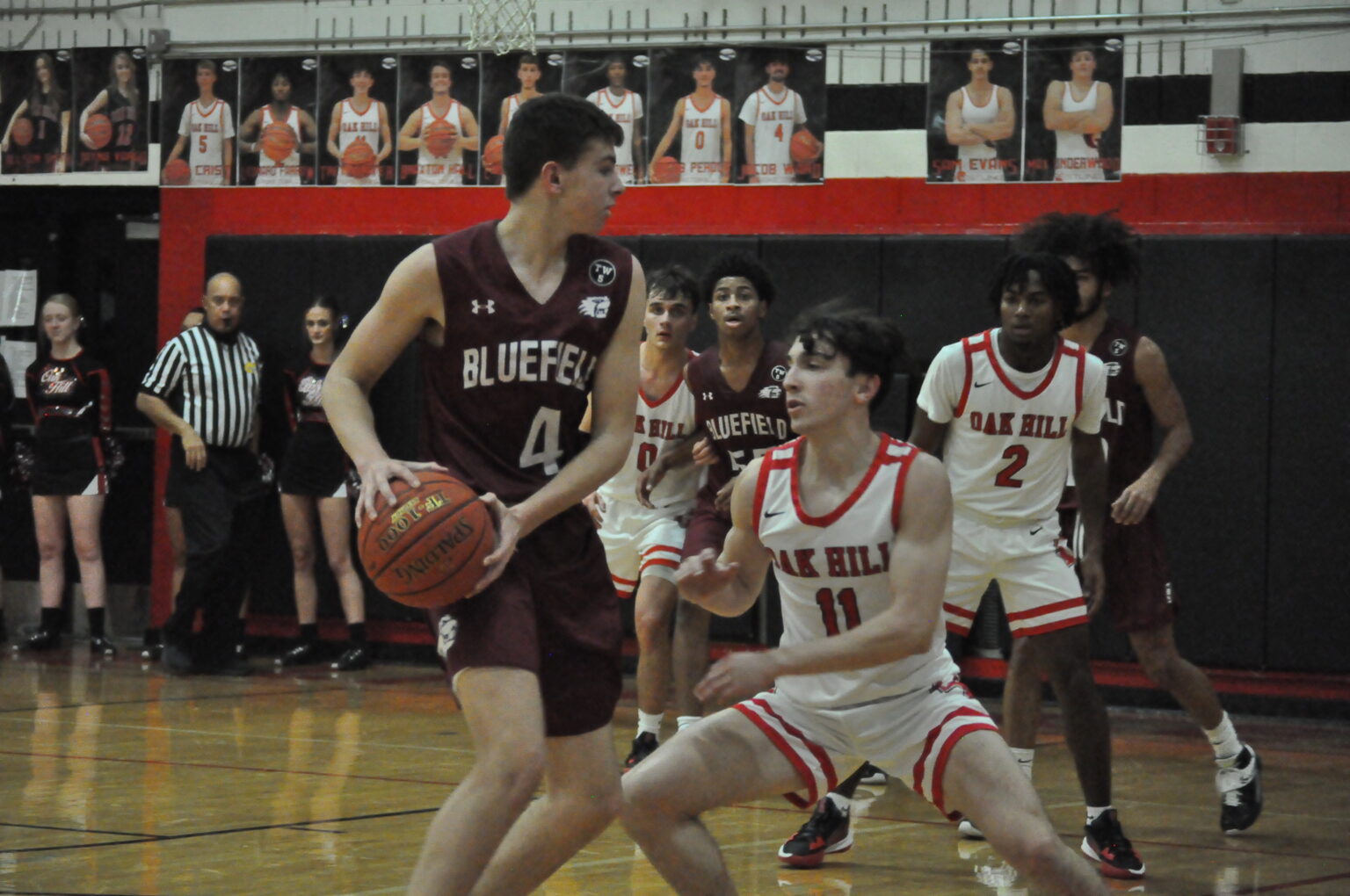 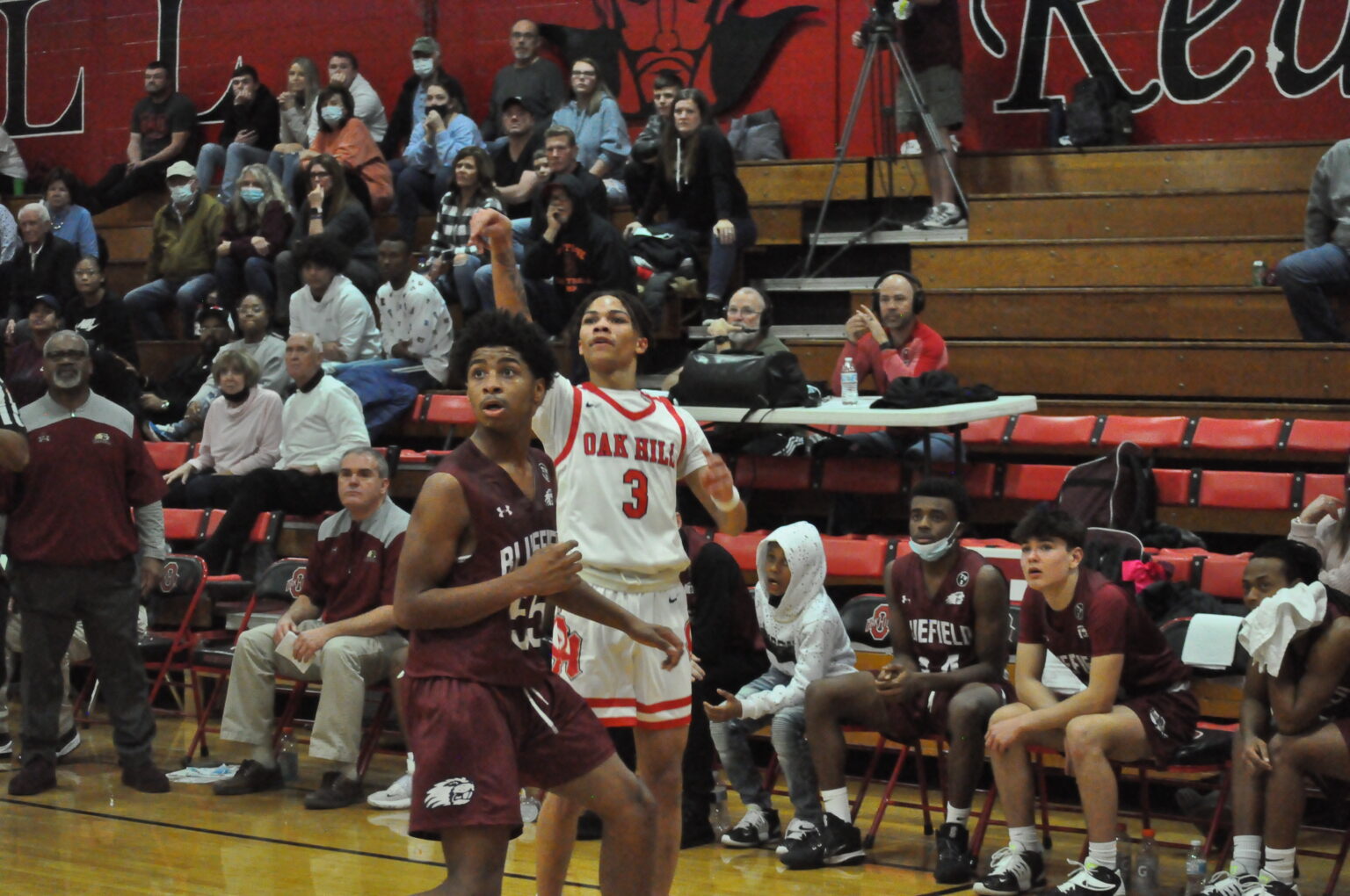 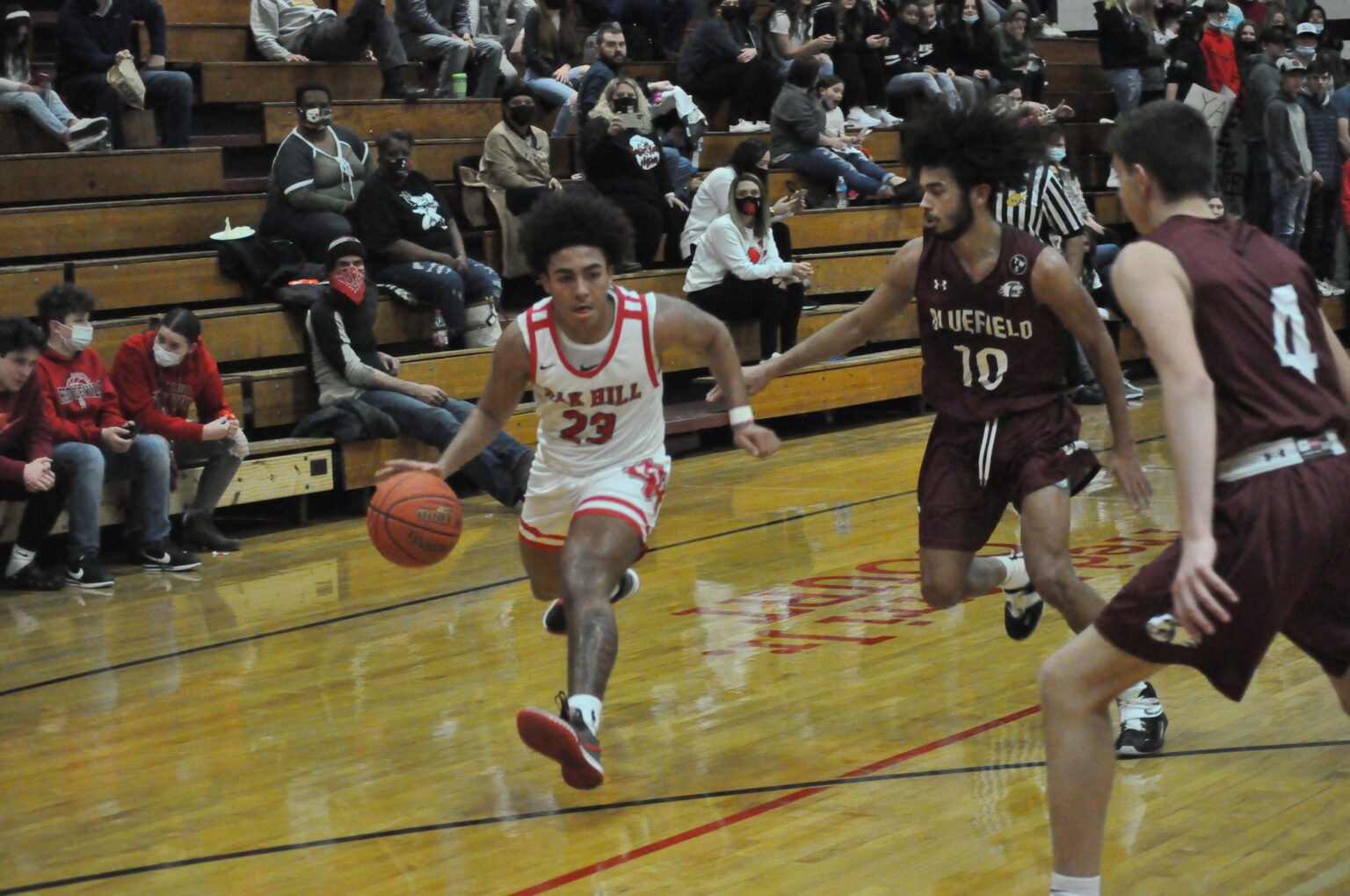 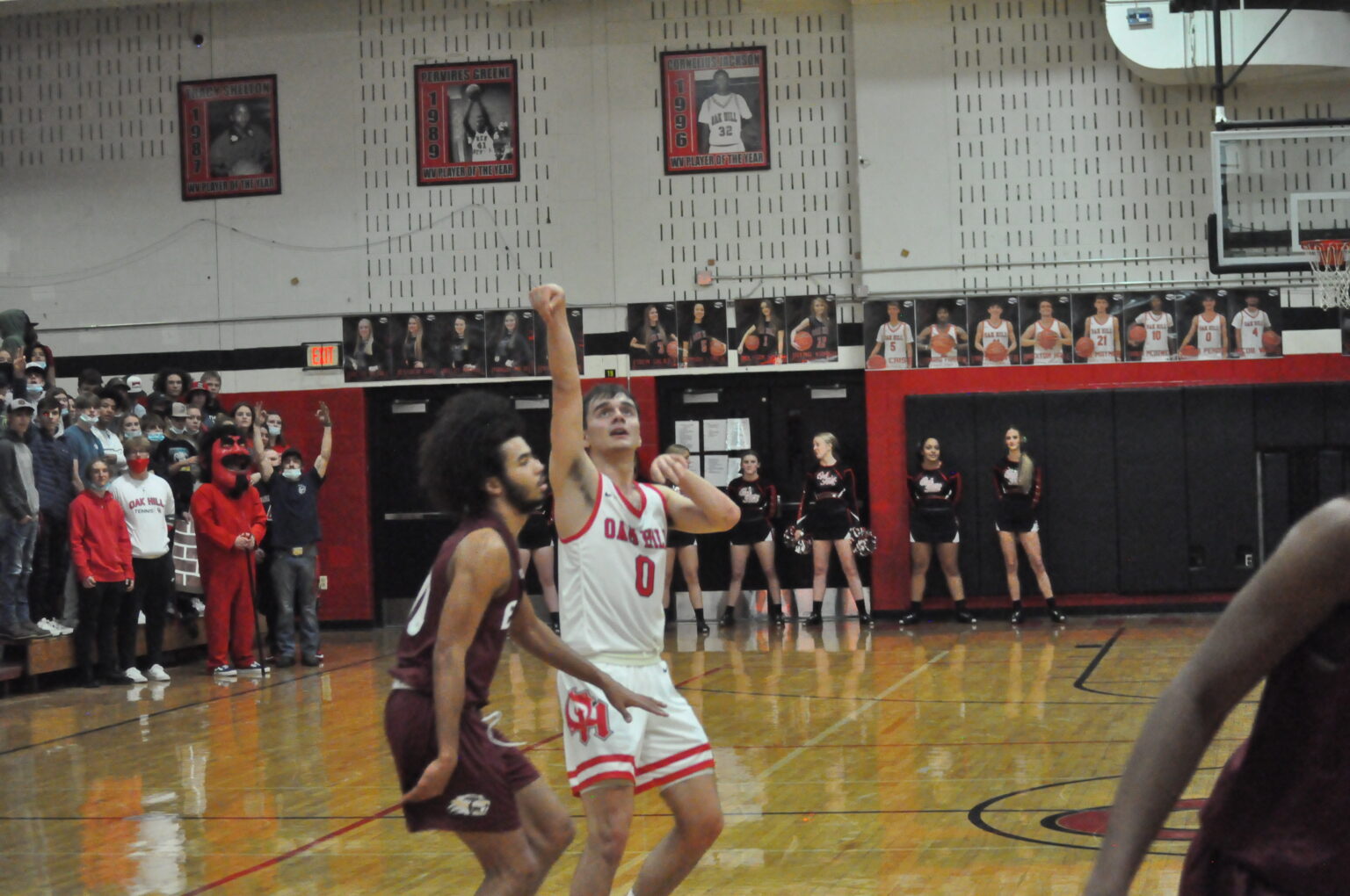 Oak Hill's Jacob Perdue follows through on a shot. Photo by Greg Carey/WVMetroNews.com 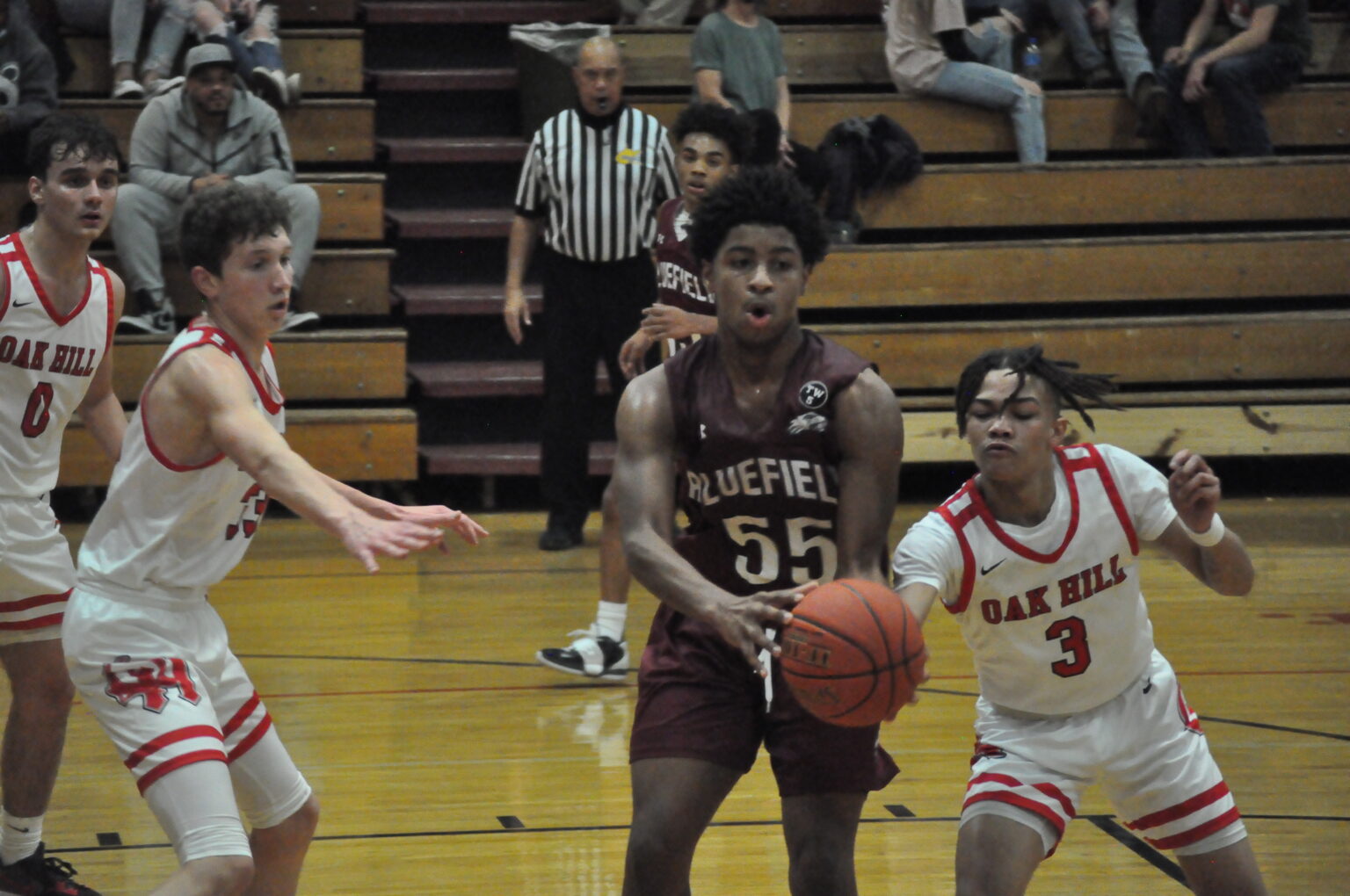 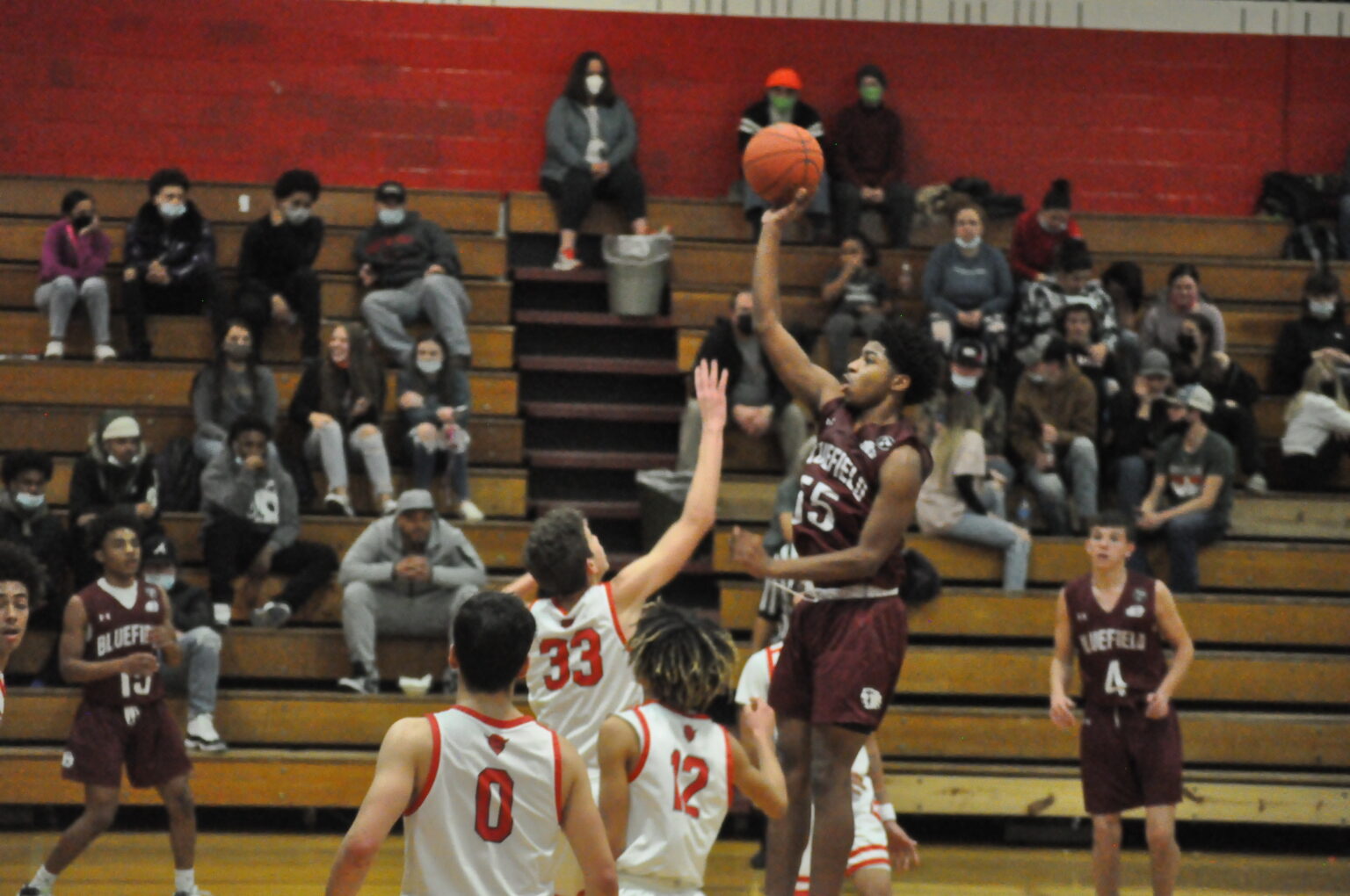 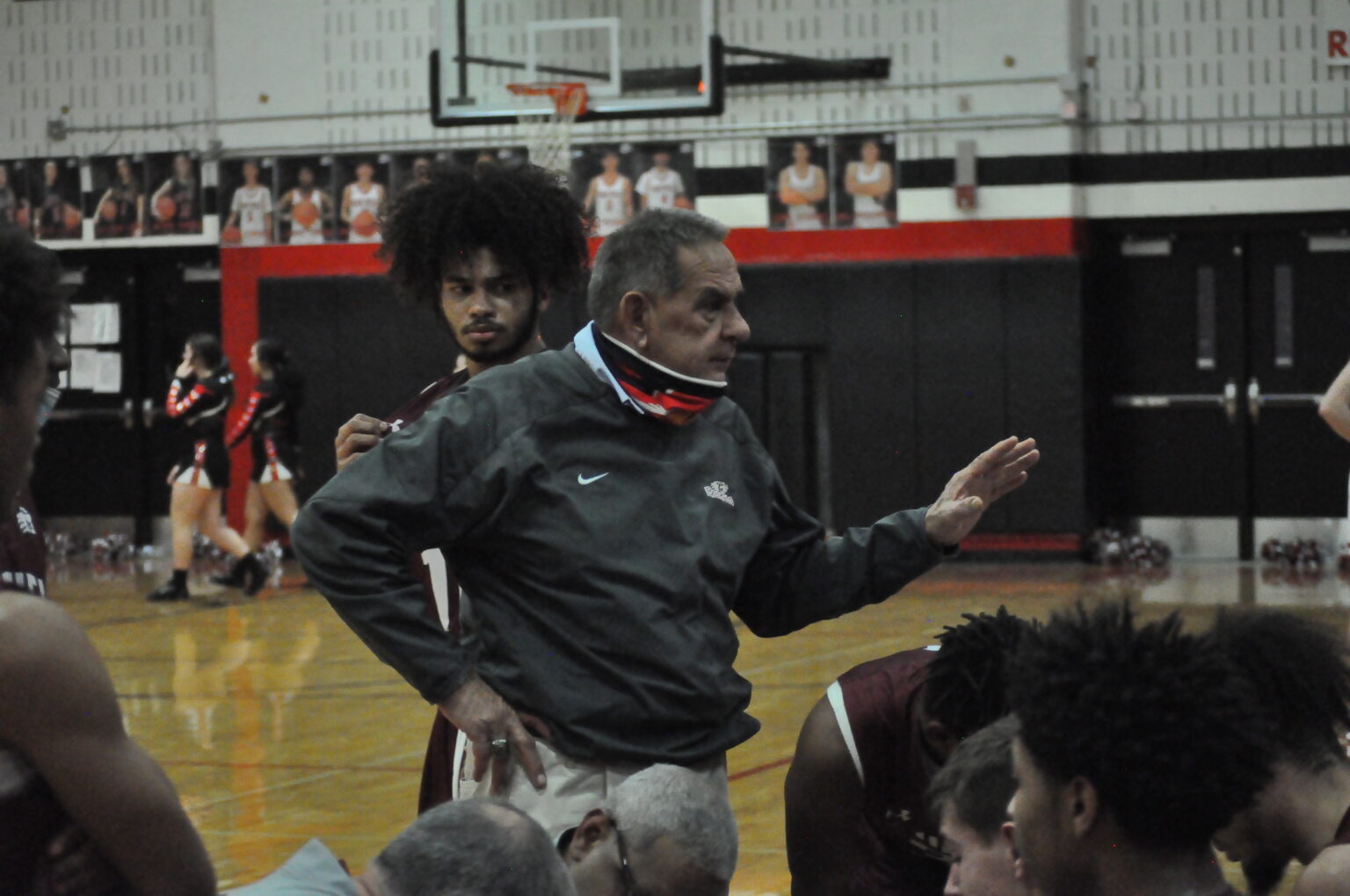 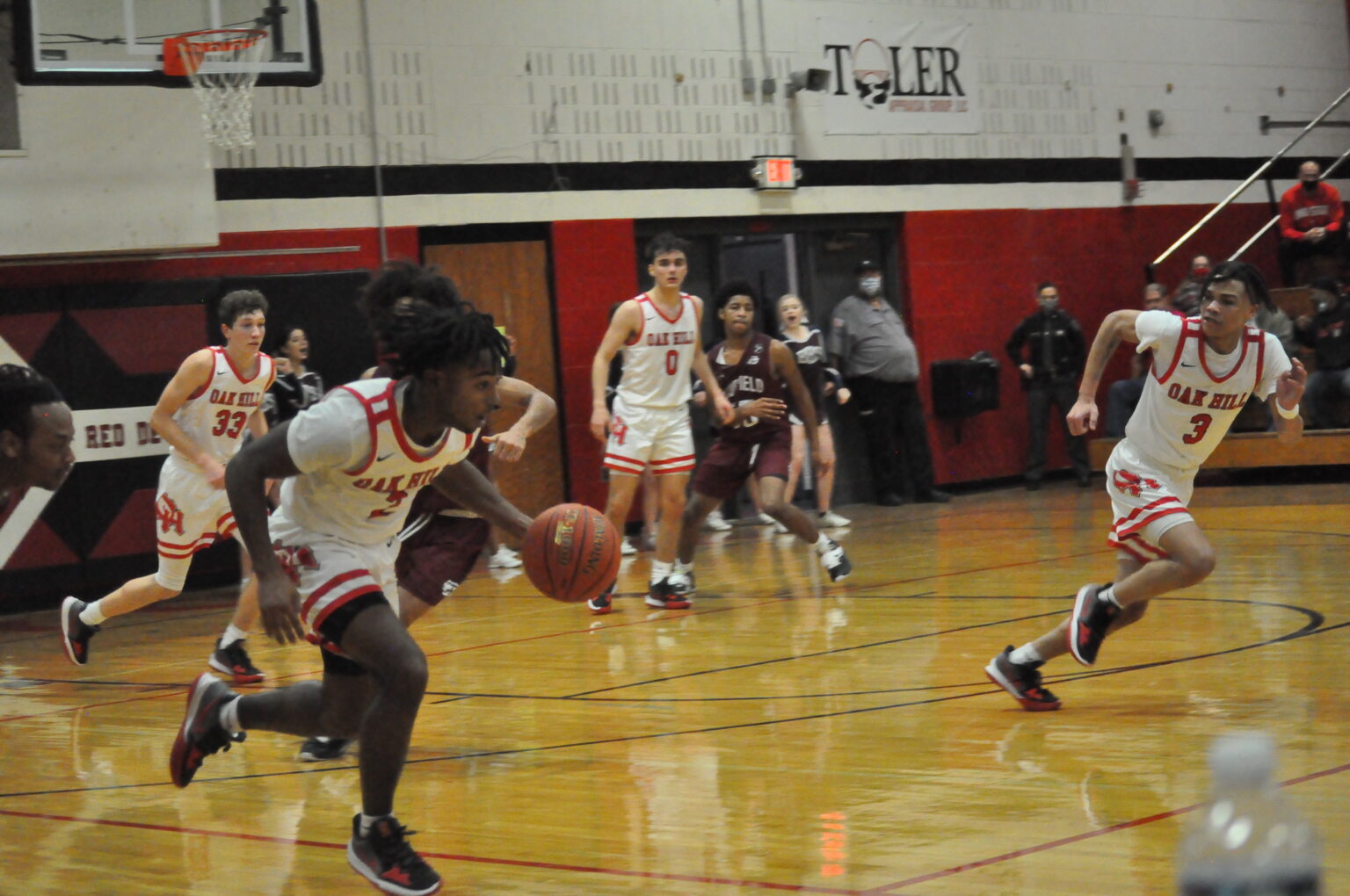 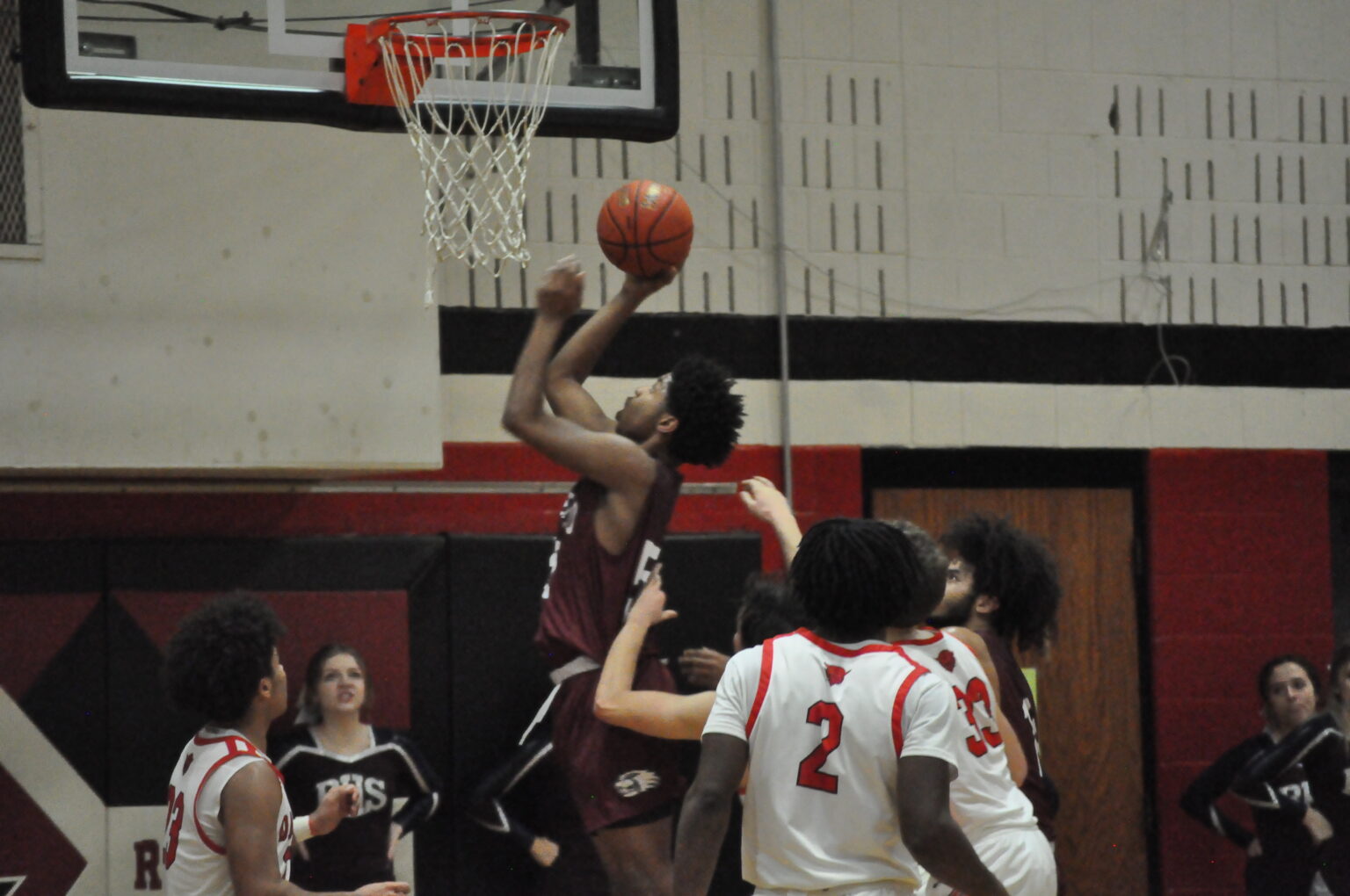 Bluefield's RJ Hairston goes up for a layup. Photo by Greg Carey/WVMetroNews.com 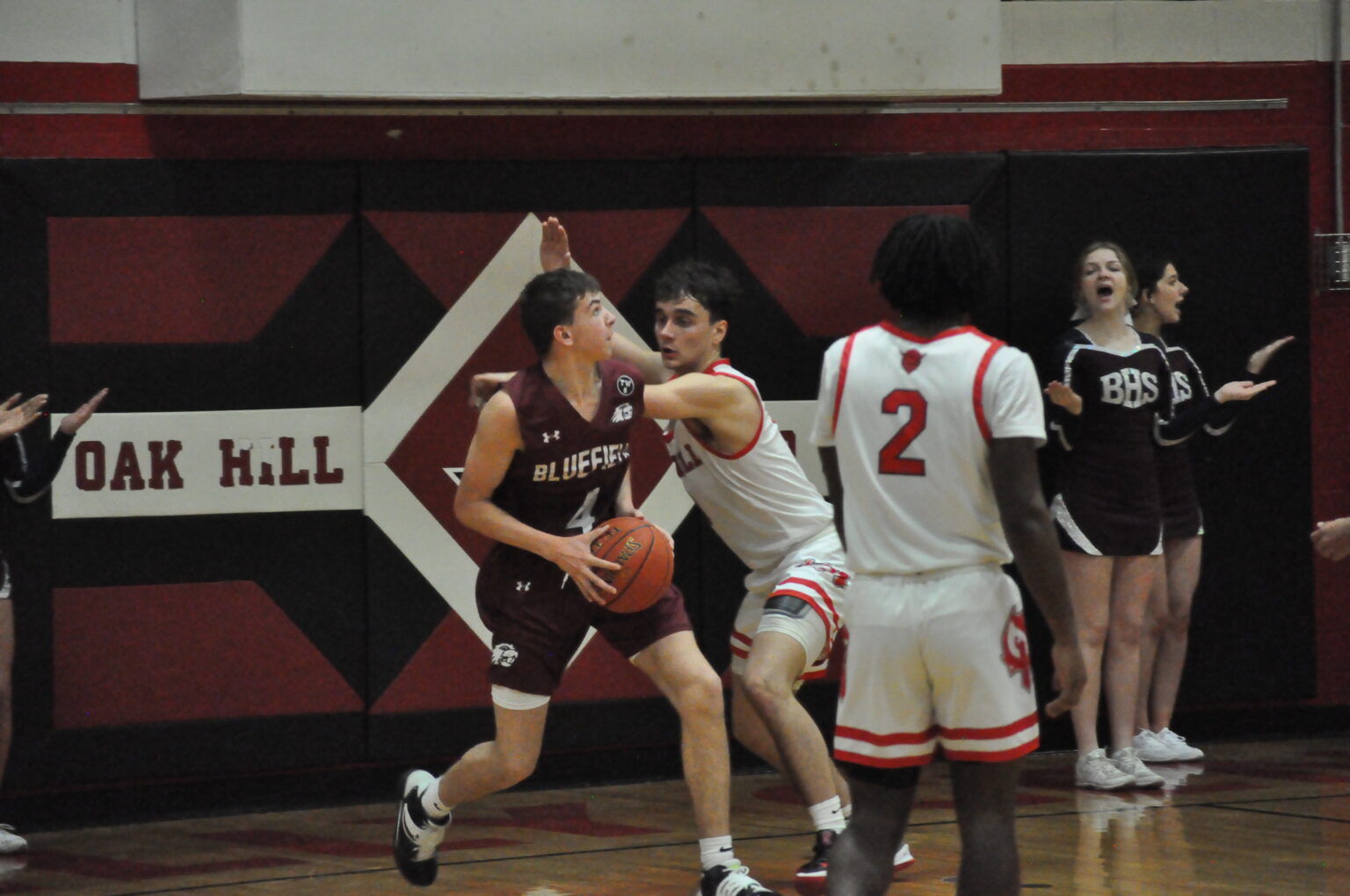 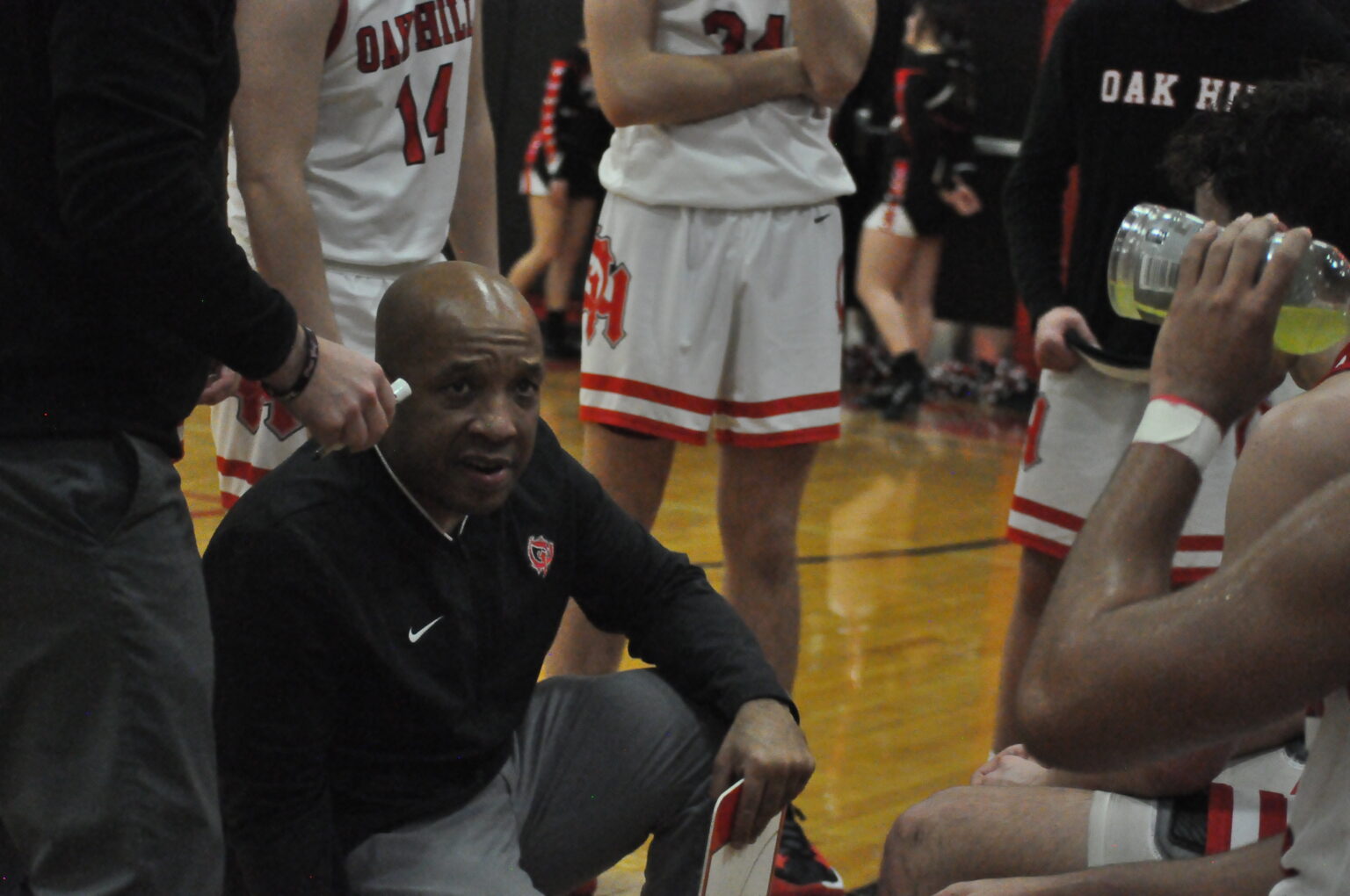 While that proved to be the case, the Beavers were able to work past it with a strong defensive showing, dominant rebounding effort and stellar play from RJ Hairston, whose double double led Bluefield to a 46-37 victory at Fred Ferri Jr. Court.

“I give [assistant coach Tony Webster] total credit for that defense,” Large said. “He works like crazy every day in practice and it pays off. You look at all of our scores, we’re only giving up in the high 30s and 40s frequently, and we’ve played some pretty powerful teams.”

Hairston was equally effective in both halves, finishing the opening two quarters with 10 points and five rebounds en route to game-high totals of 21 points and 11 boards.

The 6-foot-3 sophomore made 4-of-5 field goals to score 8 points in the first quarter, which was double the amount of the Red Devils.

“When I hit a few jumpers, I got into my groove, and I got a few layups and everything opens up,” Hairston said.

While missing several key contributors, Oak Hill (4-4) struggled offensively throughout the evening and finished the opening quarter with two field goals and seven turnovers to fall behind, 14-4.

“We were missing some guys that would’ve played a lot for us, but we had enough guys,” Red Devils’ coach Benitez Jackson said. “You just have to make shots. I don’t know how many layups we missed, but we missed a lot of layups.”

Bluefield (5-2) held its largest lead of the first half late in the second quarter at 24-10 following a Steven Addair 3-pointer, but the Red Devils (4-4) got Trey Foster’s layup and a triple from Jacob Perdue to enter halftime with a nine-point deficit.

Bluefield’s Caleb Fuller and Oak Hill’s Malachi Lewis traded triples in the third quarter that left the Beavers with a 29-20 lead. The Red Devils got as close as six late in the period when Leonard Farrow scored on a driving layup, but Hairston answered with a layup of his own to send BHS into the fourth quarter with a 33-25 advantage.

The Red Devils were never out of the game, but couldn’t make up ground as they traded baskets over the first half of the final frame, leaving them with a 39-31 deficit following Farrow’s layup with 4:08 to play.

Hairston and Chance Johnson then scored inside to up the Beavers’ advantage to 12, and Oak Hill got no closer than eight down the stretch.

“It’s not easy with the two-week layoff here in January when you’re used to playing two and three games a week,” Large said. “Fortunately we found a way.”

Hairston made 10-of-16 field-goal attempts, while Fuller connected on three 3s to give the Beavers a second double-figure scorer with 13.

Johnson contributed seven rebounds in the win. Despite being out-rebounded by two in the second half, Bluefield won the battle of the boards, 30-22.

“The rebounding was really good and our defense was helping on the back side and helping down the middle,” Large said. “We’ve gotten better and hopefully next week, we’ll get a little bit better.”

Oak Hill finished with only six turnovers over the final three quarters to give it 13 for the game, but couldn’t overcome 16-of-44 shooting in the setback.

“We had a lot of shots at the rim and we had a lot of open outside shots,” Jackson said. “We just didn’t make them. The only thing that corrects that is getting in the gym and shooting. We have to get there early and stay late. Then you get some confidence in your shot and if they fall, we’re in every game we play. We’re just having a hard time scoring and hopefully that’ll change next game.”