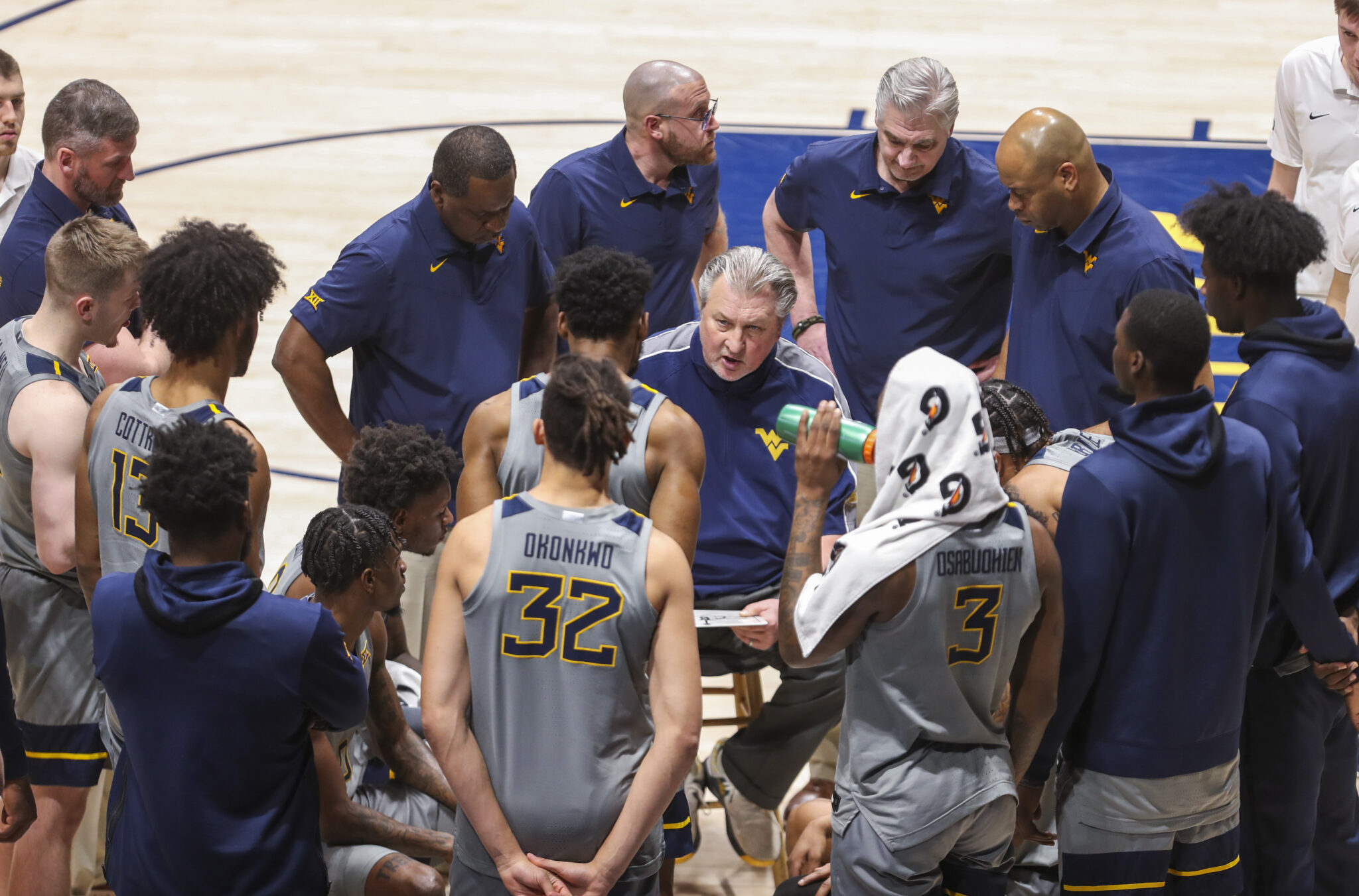 West Virginia head coach Bob Huggins talks to his team during a timeout during the second half against the Oklahoma State Cowboys at WVU Coliseum. Mandatory Credit: Ben Queen-USA TODAY Sports

West Virginia seeks a breakthrough victory at famed Allen Fieldhouse when the Mountaineers meet No. 9 Kansas at 2 p.m. Saturday.

While WVU has experienced its fair share of close calls at KU, the Jayhawks have won all nine matchups against the Mountaineers on their hardwood.

“What sets the building apart is 17,000 people, and it’s 17,000 people no matter who they play,” WVU head coach Bob Huggins said. “It’s an older, unique building. You don’t get to play in places like that very often. There’s not a whole lot of buildings like that or as preserved as what Allen Fieldhouse is. We’ve had our chances. We’ve played pretty well there at times and things have a way of happening.”

Since getting the roster back to full strength following a 74-59 loss in its conference opener at Texas, the Mountaineers have knocked off Kansas State and Oklahoma State to climb above the .500 mark in league play. To stay there, WVU will need to record its second road win its third road contest of the season.

The Mountaineers enter a confident bunch, fresh off an impressive 70-60 win over the Cowboys on Tuesday. Sophomore forward Jalen Bridges matched his career-high point total and set a season-high mark with 22 points, including a 10 of 10 effort at the free-throw line.

“Everybody’s had ups and downs. Sean and Taz have had ups and downs,” Huggins said. “That’s part of what happens and why it’s important you have other people to pick up what they weren’t able to do that particular game. JB has been really good. He’s as coachable a guy as you’re ever going to be around. He struggled with his shot early and he has it straightened out again now. He’s a guy who can do a lot of things and play a lot of positions for us, and he’s probably the most versatile guy we have.”

As has been the case for the majority of the first 15 games, West Virginia’s success was again predicated on its defense, which forced 17 Oklahoma State turnovers and held the Cowboys to less than 40 percent shooting, including 5 of 19 on 3-pointers.

Duplicating that defensive success will be a tough task against the Jayhawks, who rank 17th in all of college basketball by averaging 81.7 points per contest.

“They’re really good. At least two of the best perimeter guys in the country and maybe more than two,” Huggins said. “They’re good. They make shots and they penetrate. Defensively, they’re pretty good.”

Kansas boasts the Big 12’s leading scorer in 6-foot-5 senior Ochai Agbaji, who averages 20.6 points on better than 53 percent shooting. Agbaji is one of college basketball’s top perimeter threats and has connected on 47-of-99 attempts from 3-point range.

“He’s using his athleticism probably a little bit more,” Huggins said. “He’s a heck of an athlete. He has a little more versatility. He was behind the line more the last few years than what he is now. He’s a great at attacking the rim and a big-time shot maker.”

Christian Braun is the Jayhawks’ only other player averaging double figures at 16.1 points and leads the squad with a 6.2 rebounding average. However, there are plenty of other capable scoring options.

Point guard Remy Martin, an Arizona State transfer, is at 9.8 points. The 6-foot Martin did not play Tuesday when KU narrowly avoided its first home loss this season with a 62-61 victory over Iowa State. He is battling a knee injury suffered December 29 against Nevada and has missed two of the team’s four games since then. Martin’s status for Saturday’s game is in question.

“We don’t have any idea if he’ll play or how much he’ll play or whatever,” Huggins said. “We’ve just been concentrating on the guys that have played the last few games and we’ll deal with that if he comes in the game.”

David McCormack, a 6-10 senior, is the Jayhawks’ top post presence and averages 8.1 points and 5.9 boards.

“He’s a force. He’s probably the best rim protector in our league,” Huggins said. “His offense has gotten better and better the longer that he’s been there. He’s a really talented guy and a guy that will probably play for a long time.”

Jalen Wilson and Mitch Lightfoot, who both stand 6-8, average 6.6 and 5.4 points, respectively.

Sherman is directly behind Agbaji in the Big 12 scoring race at 19.9 points. After surpassing 20 points in six of WVU’s first 10 games, Sherman has not reached the mark since, though he missed the loss at Texas.

McNeil has increased his scoring of late with 73 points over the last four games, while making 12-of-18 triples during that span. The senior sharpshooter brings a 14.6 scoring average into the game.

Bridges, at 8.6 points, is WVU’s third-leading scorer. Point guards Malik Curry (6.9 ppg) and Kedrian Johnson (5 ppg) follow Bridges in scoring, while Johnson has a team-best 31 steals and relishes his role as a pesky defender.

“They don’t have a clue who Phog Allen is,” said Huggins of the legendary Kansas basketball coach for whom the arena is named after. “The only thing they know about Phog Allen is what they see on TV and what commentators on TV say about it if they’re paying attention to it. We just need to go in and play. I don’t think the fieldhouse has ever beaten us. I don’t think the students have either. I don’t want to really go further along down that road.”