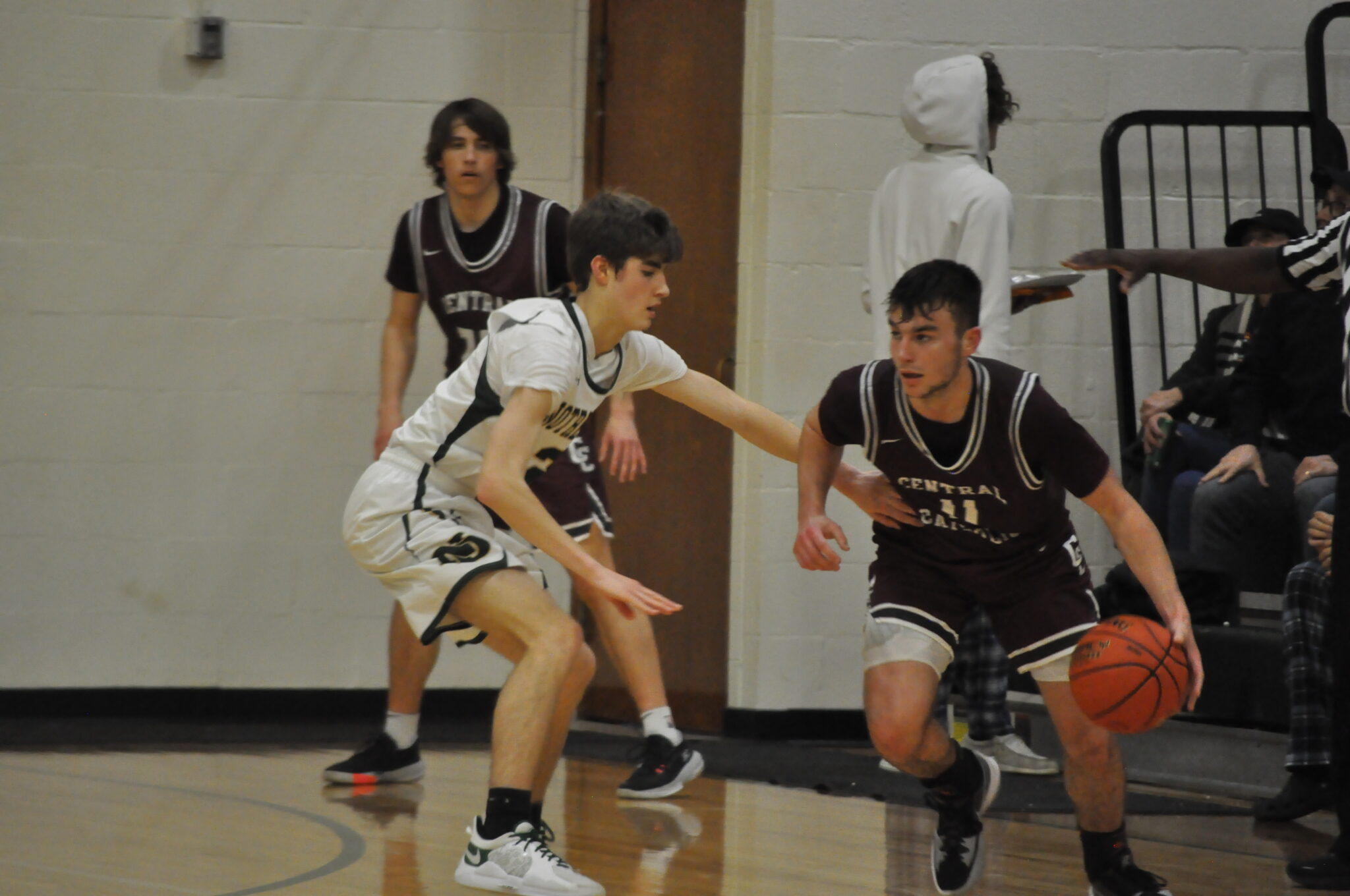 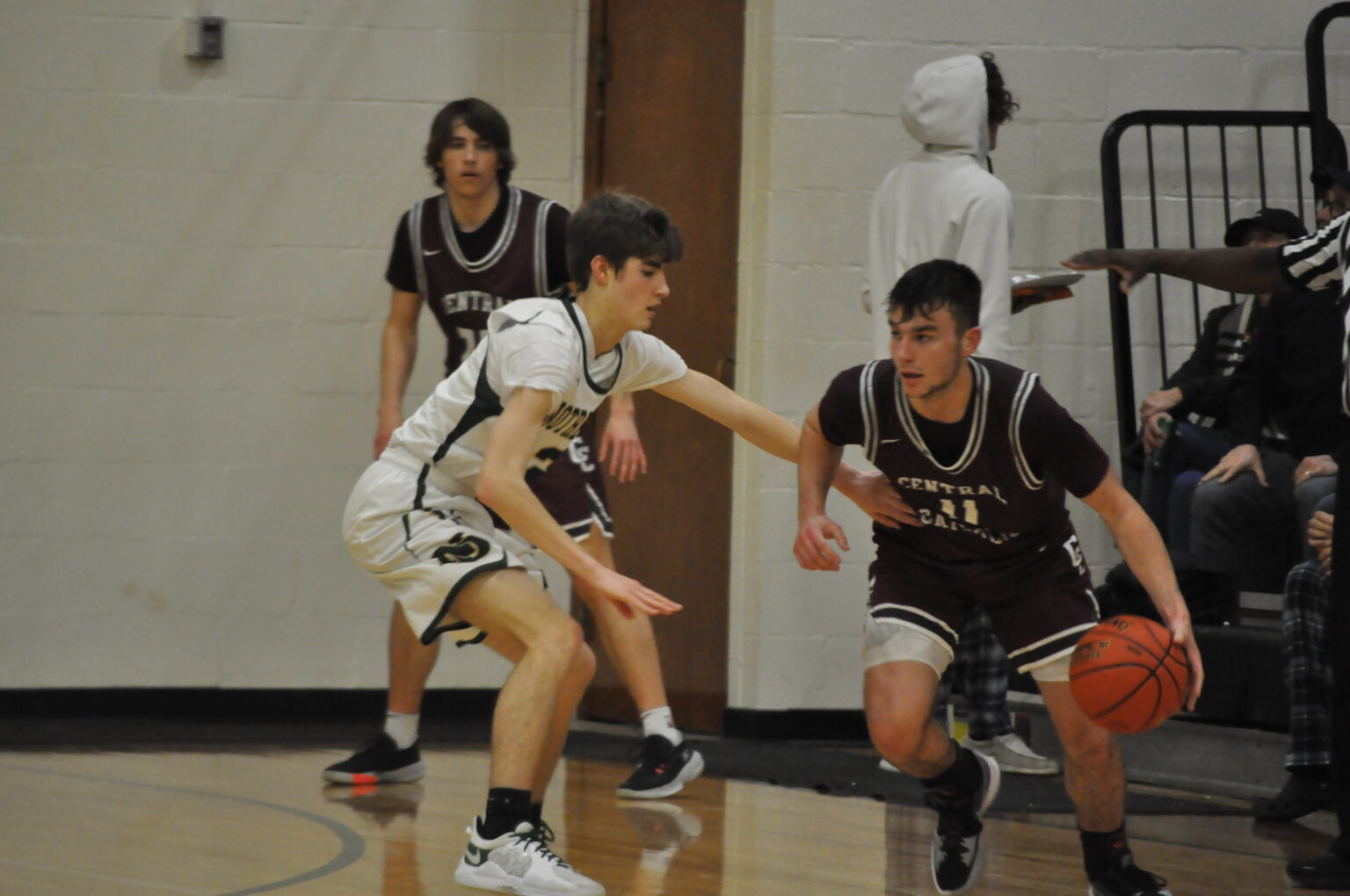 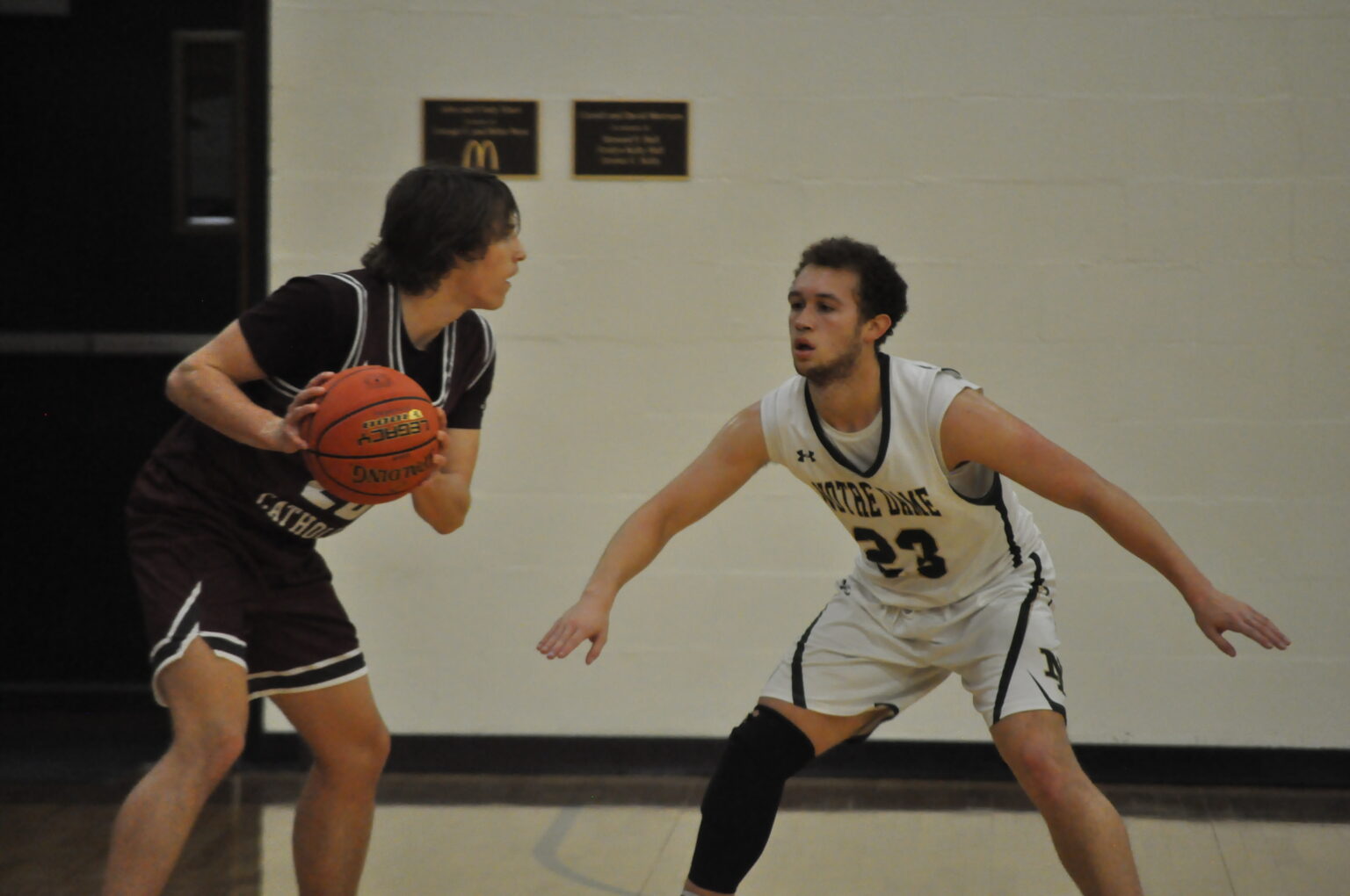 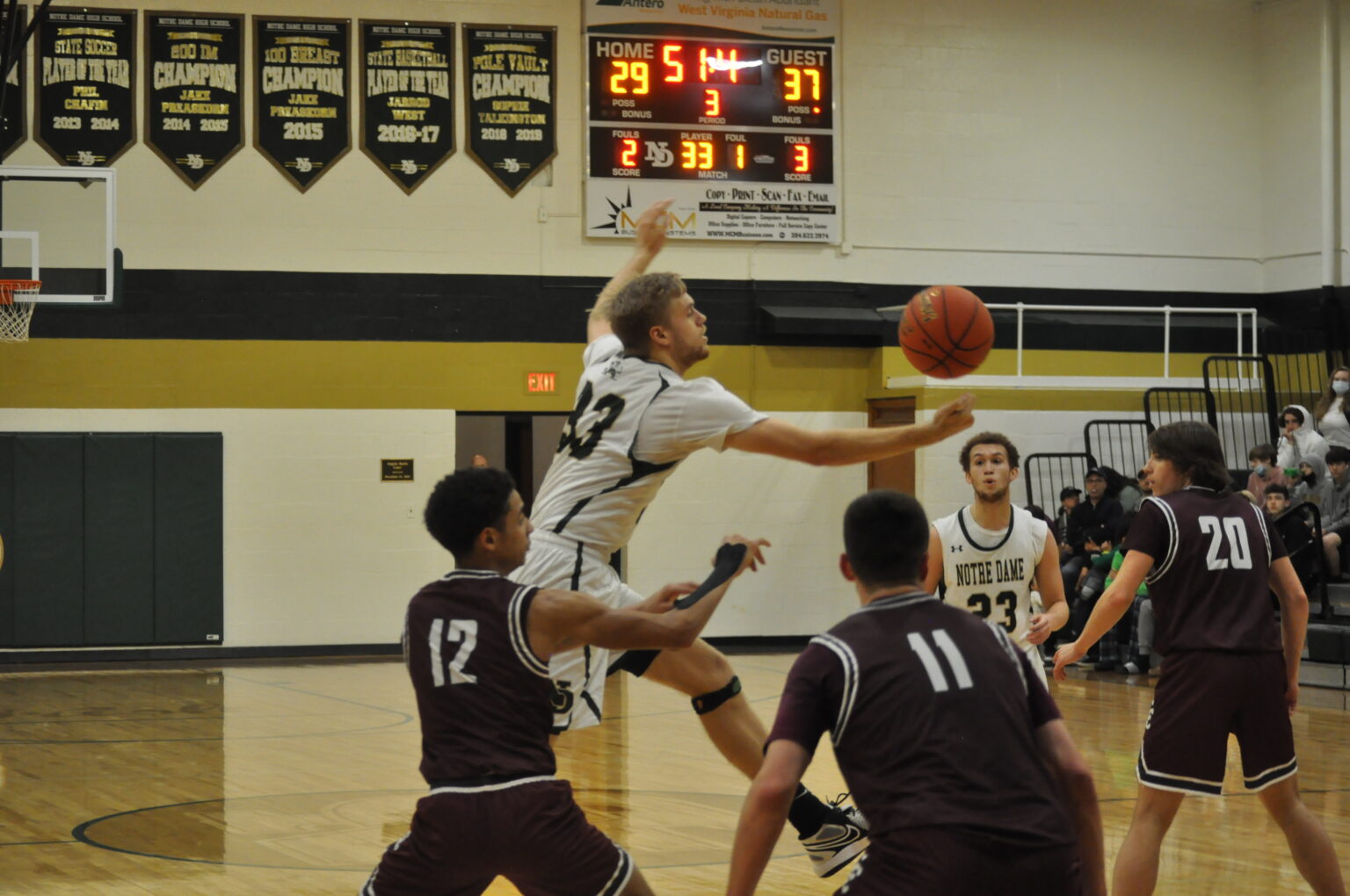 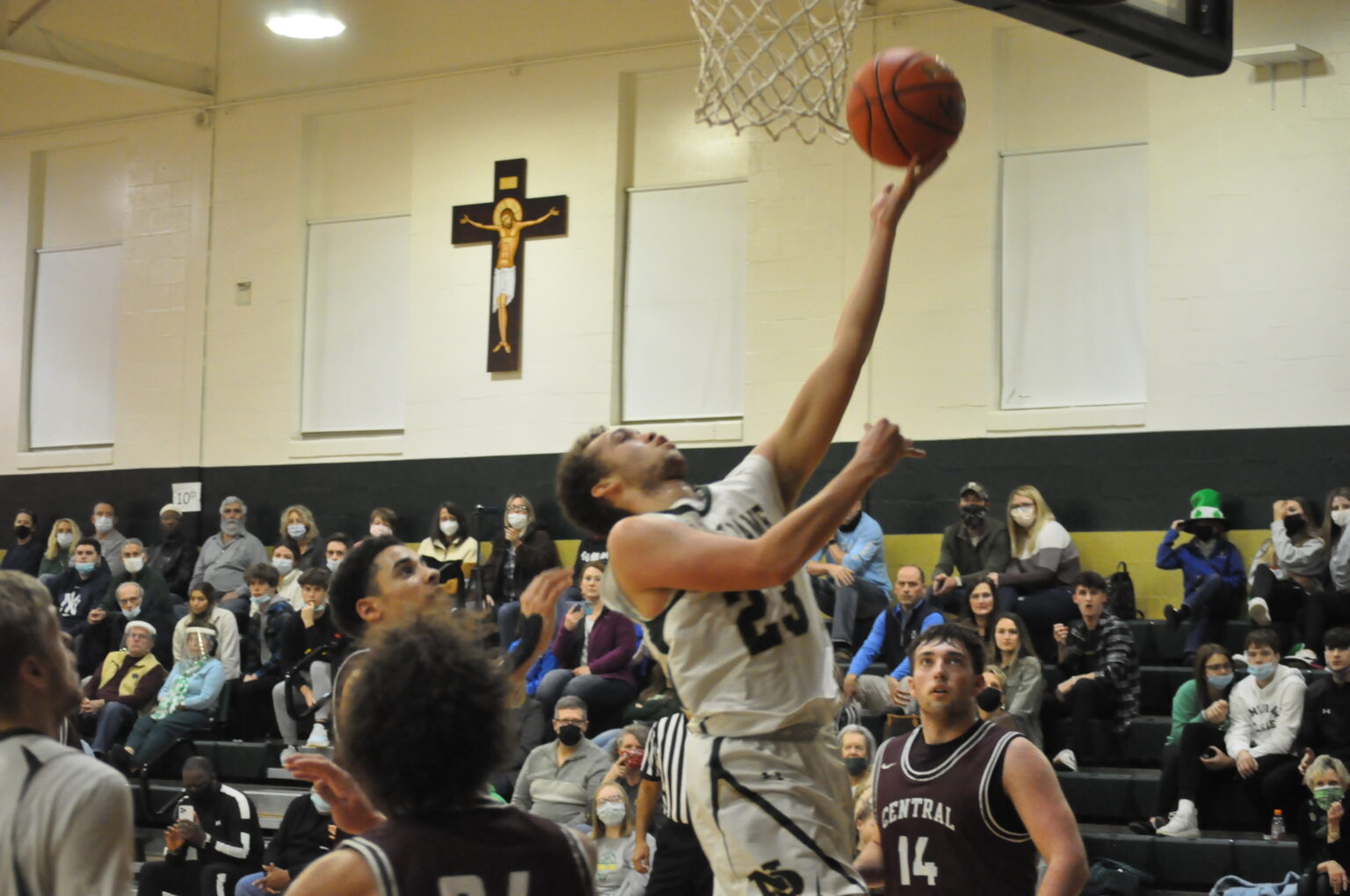 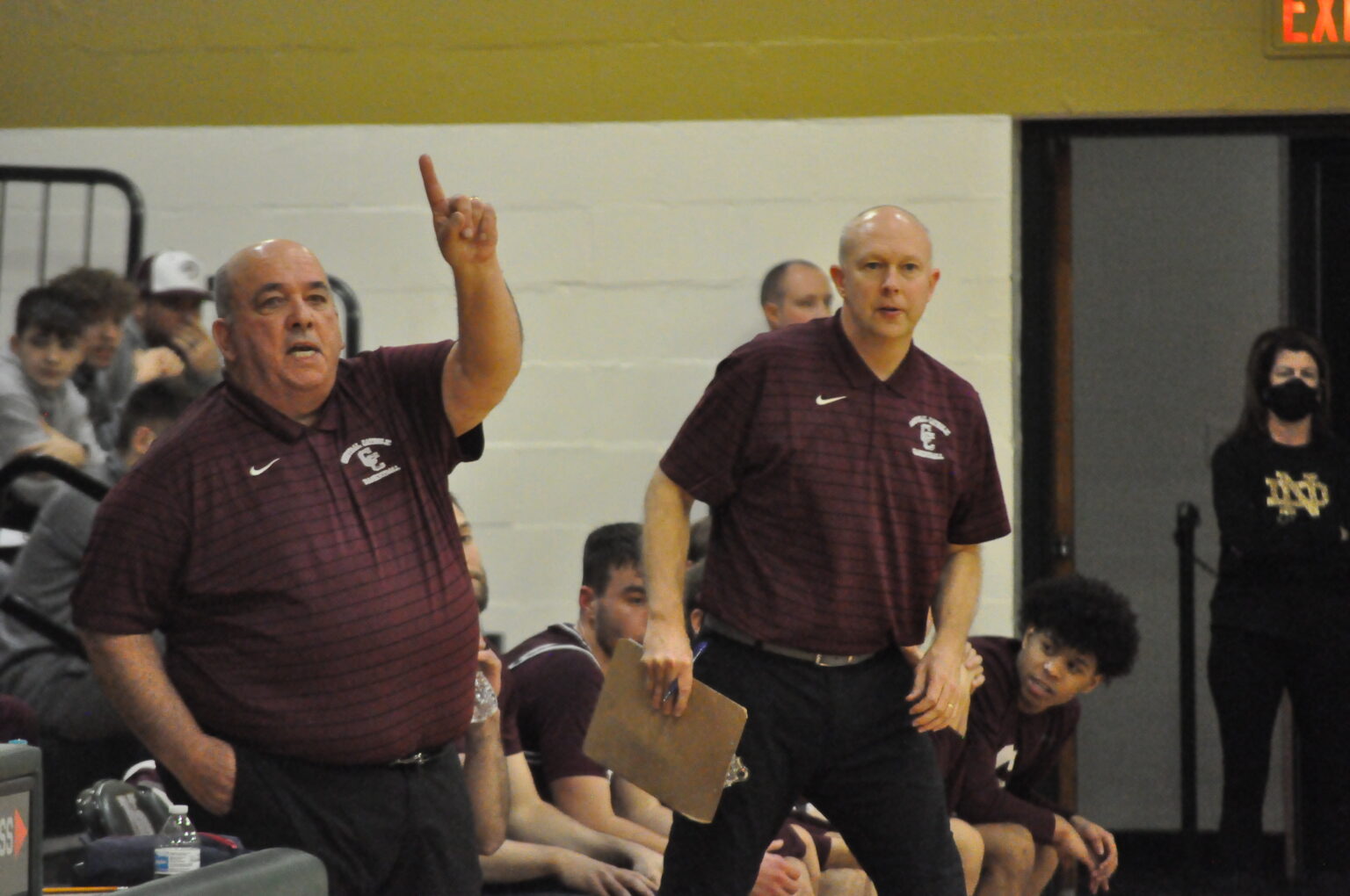 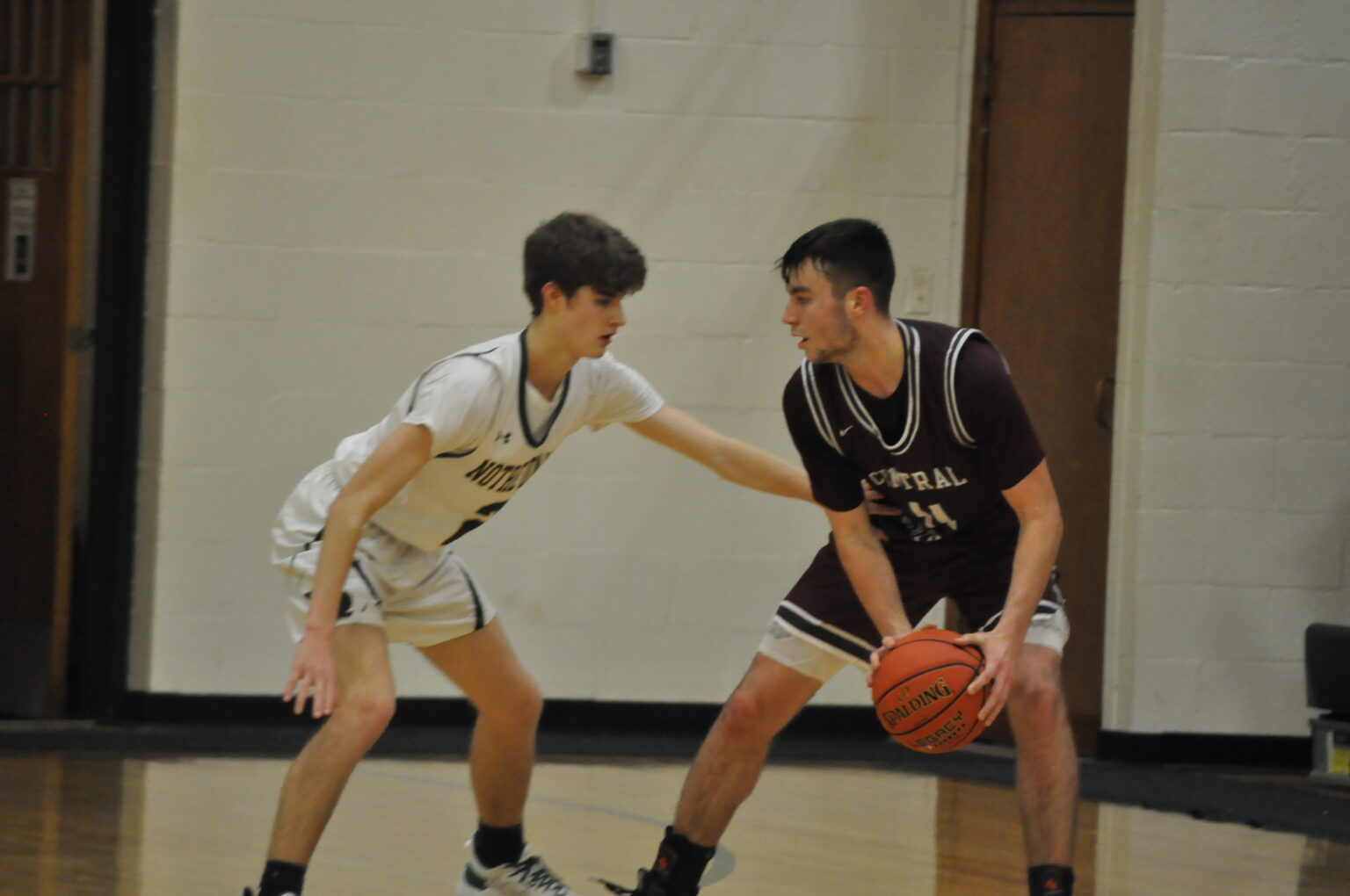 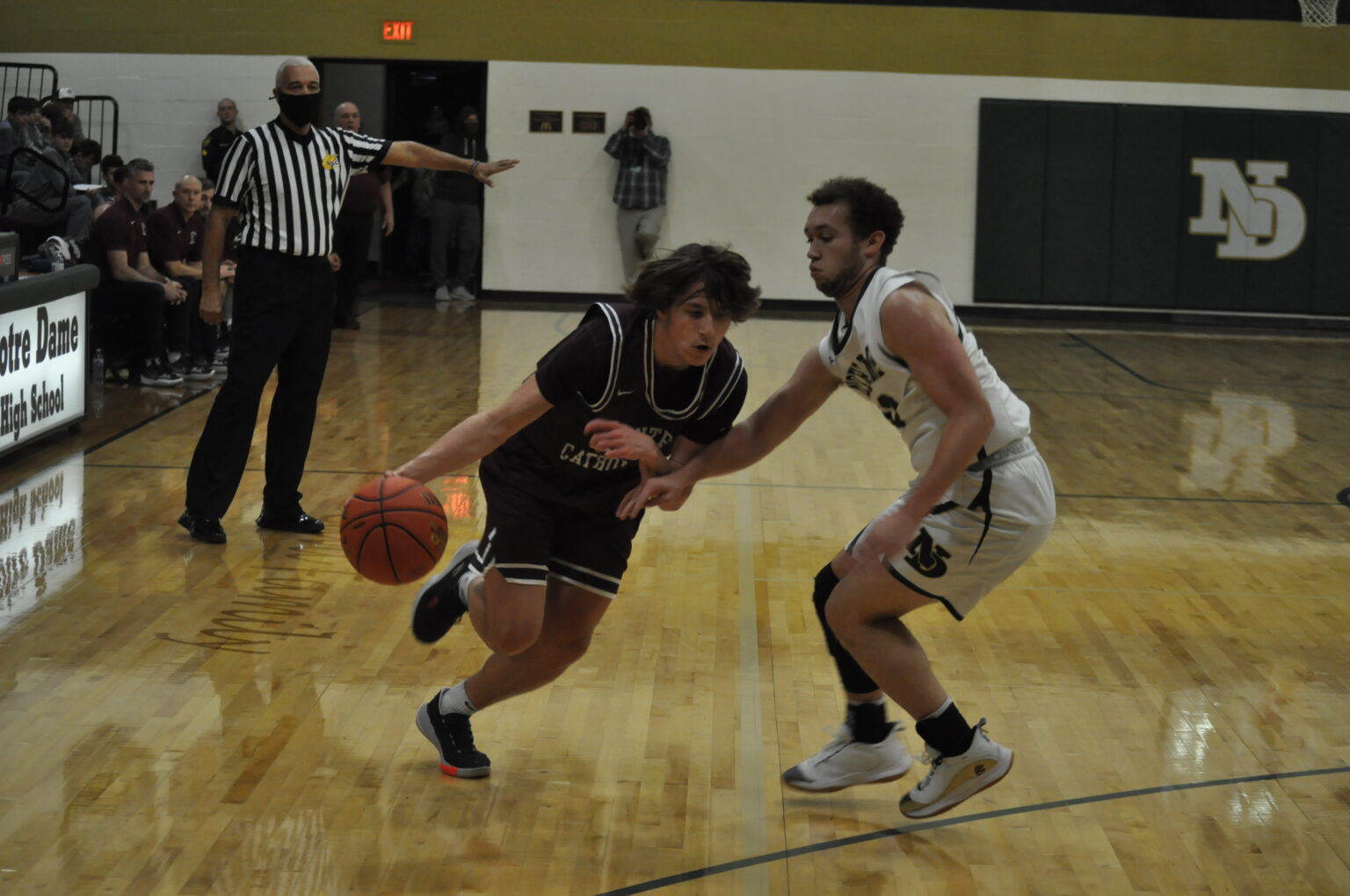 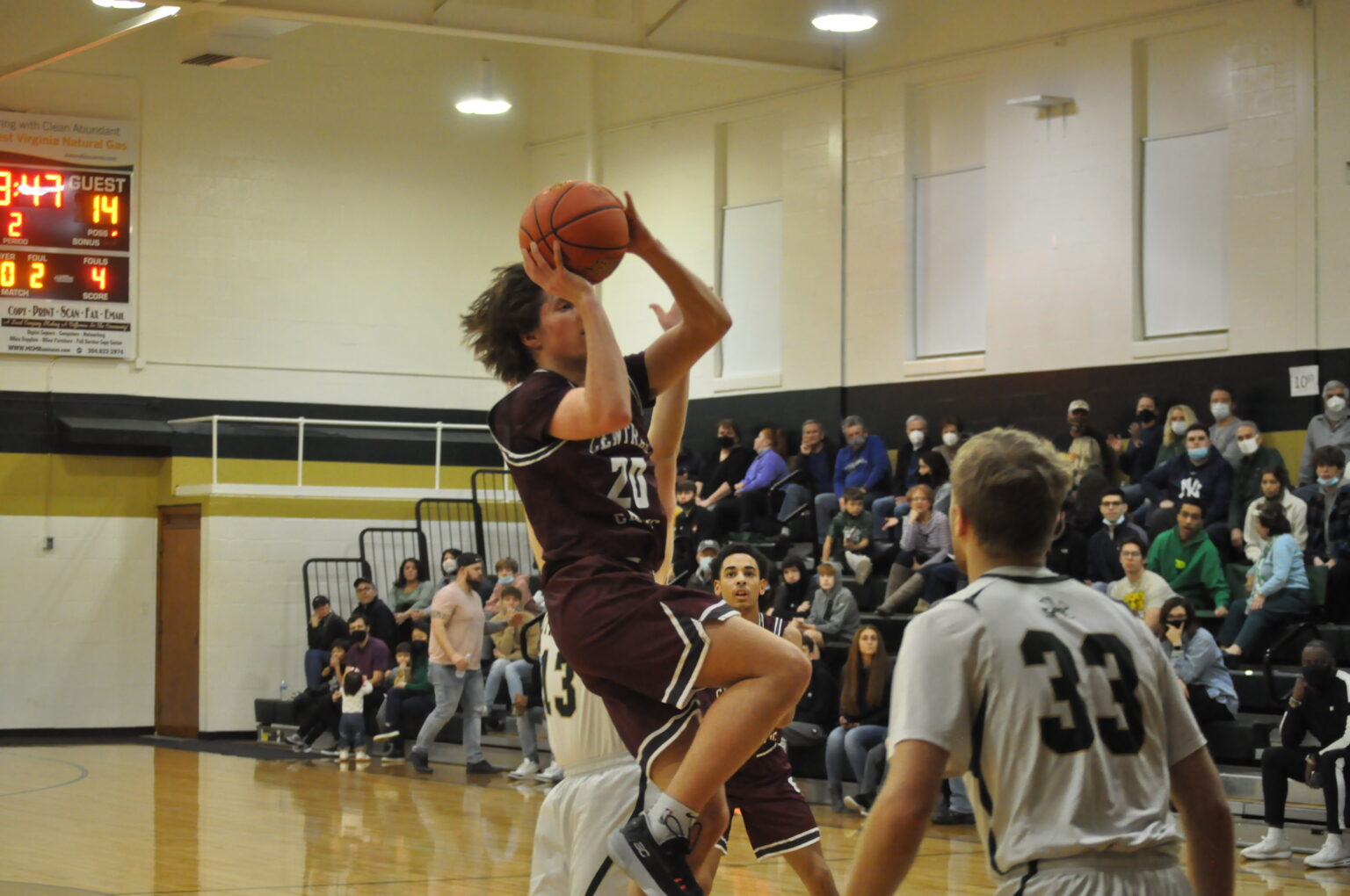 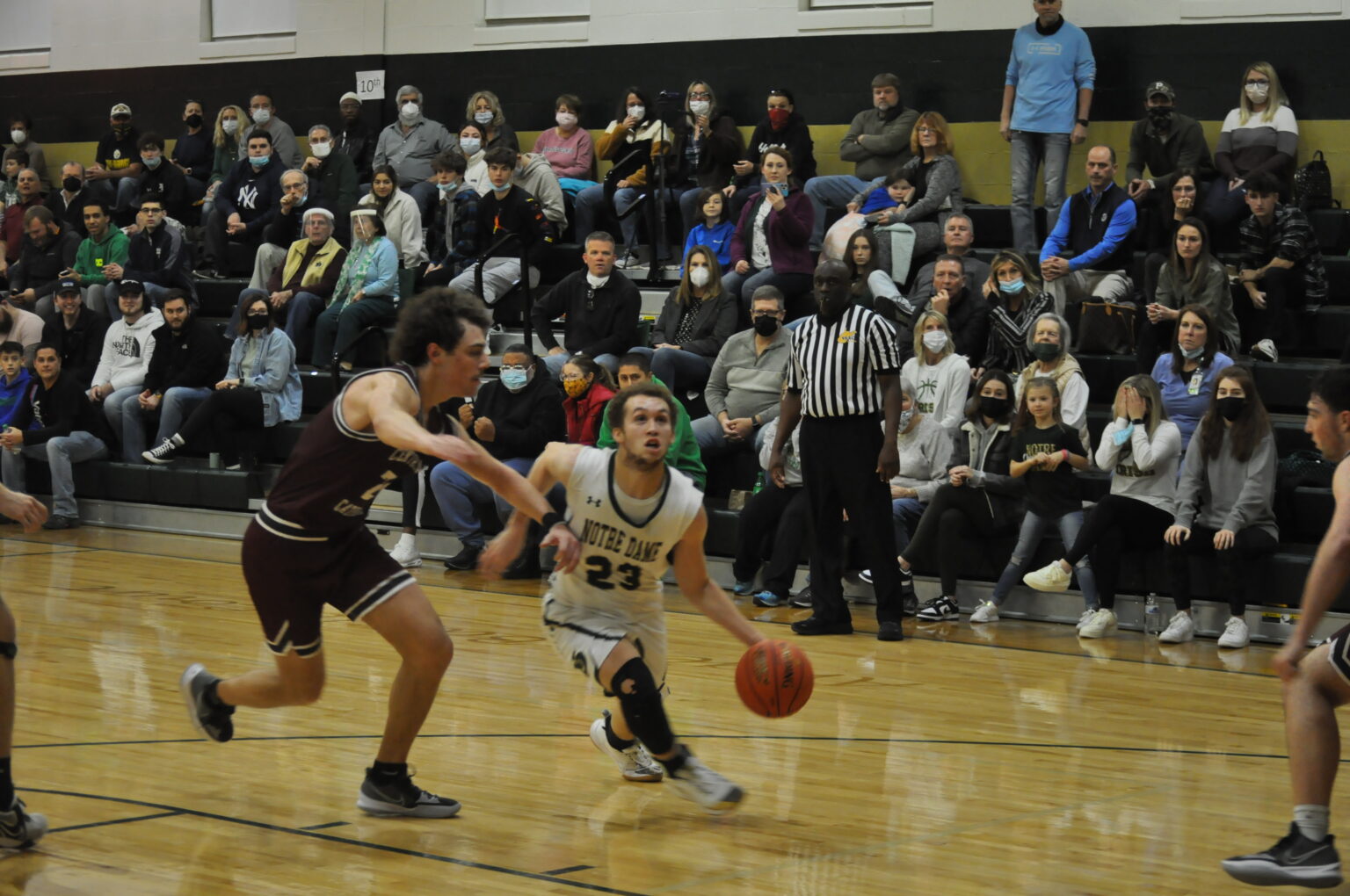 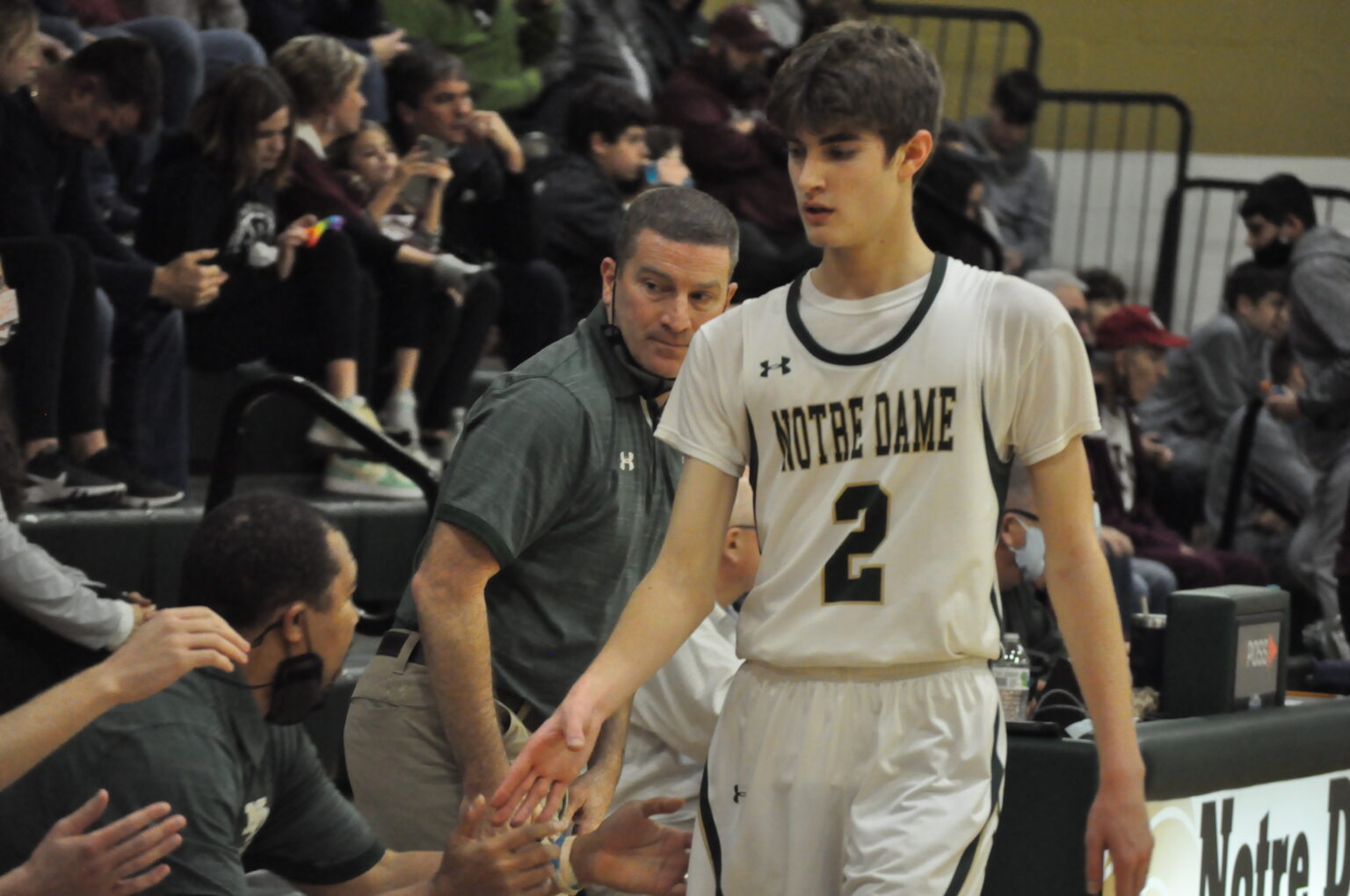 Notre Dame's Dominic Zummo is congratulated by teammates as he heads to the bench. Photo by Greg Carey/WVMetroNews.com 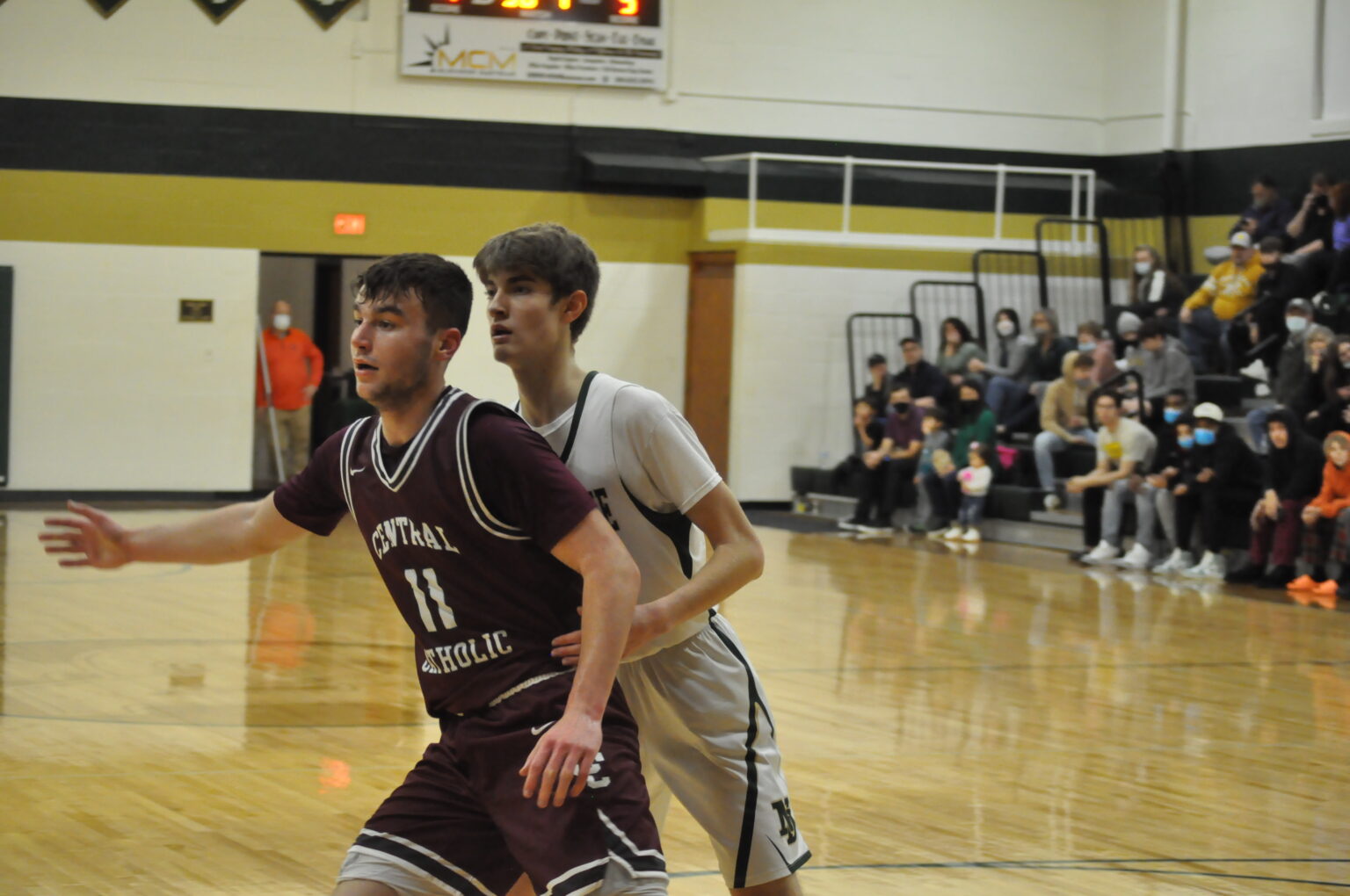 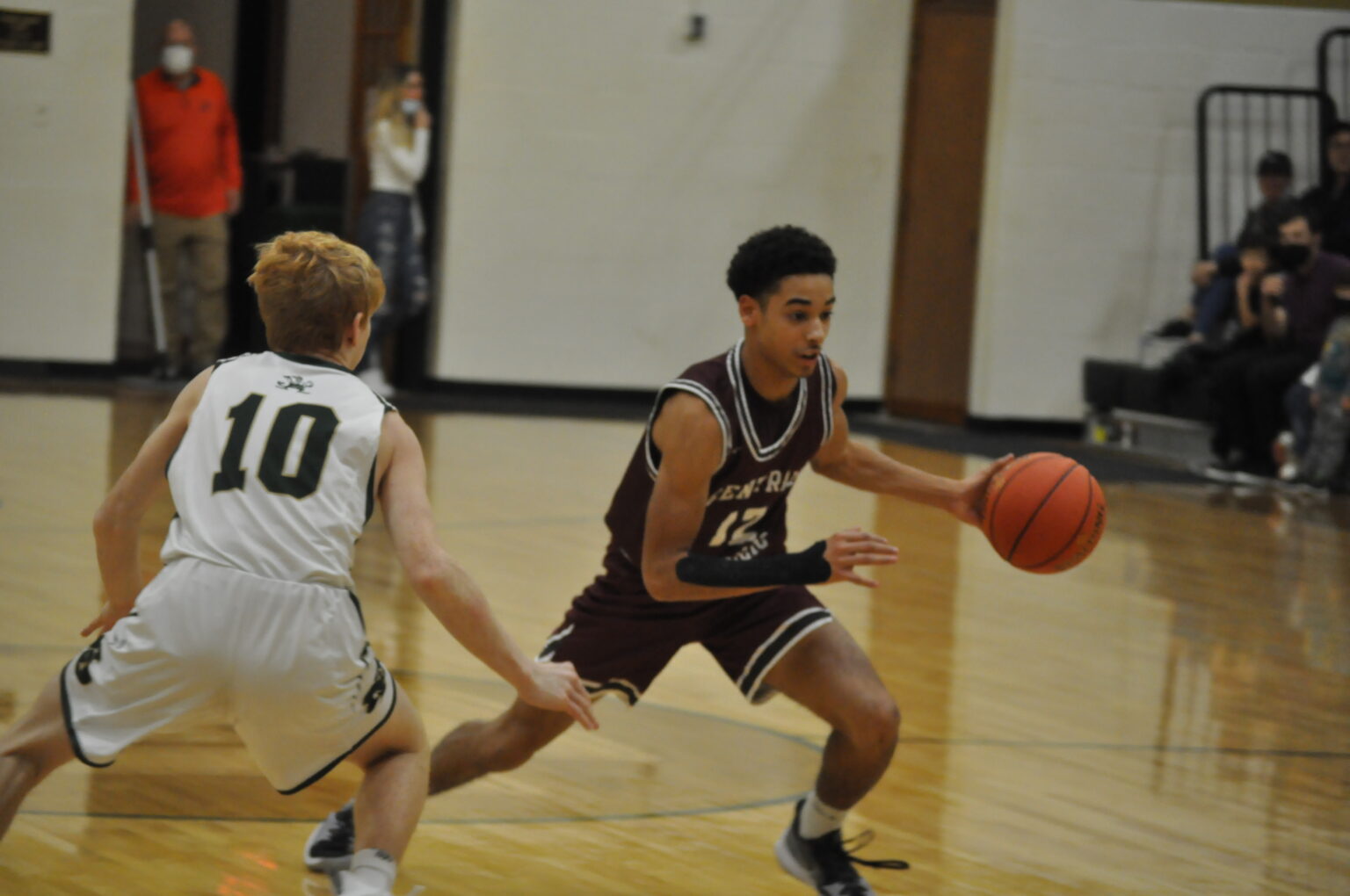 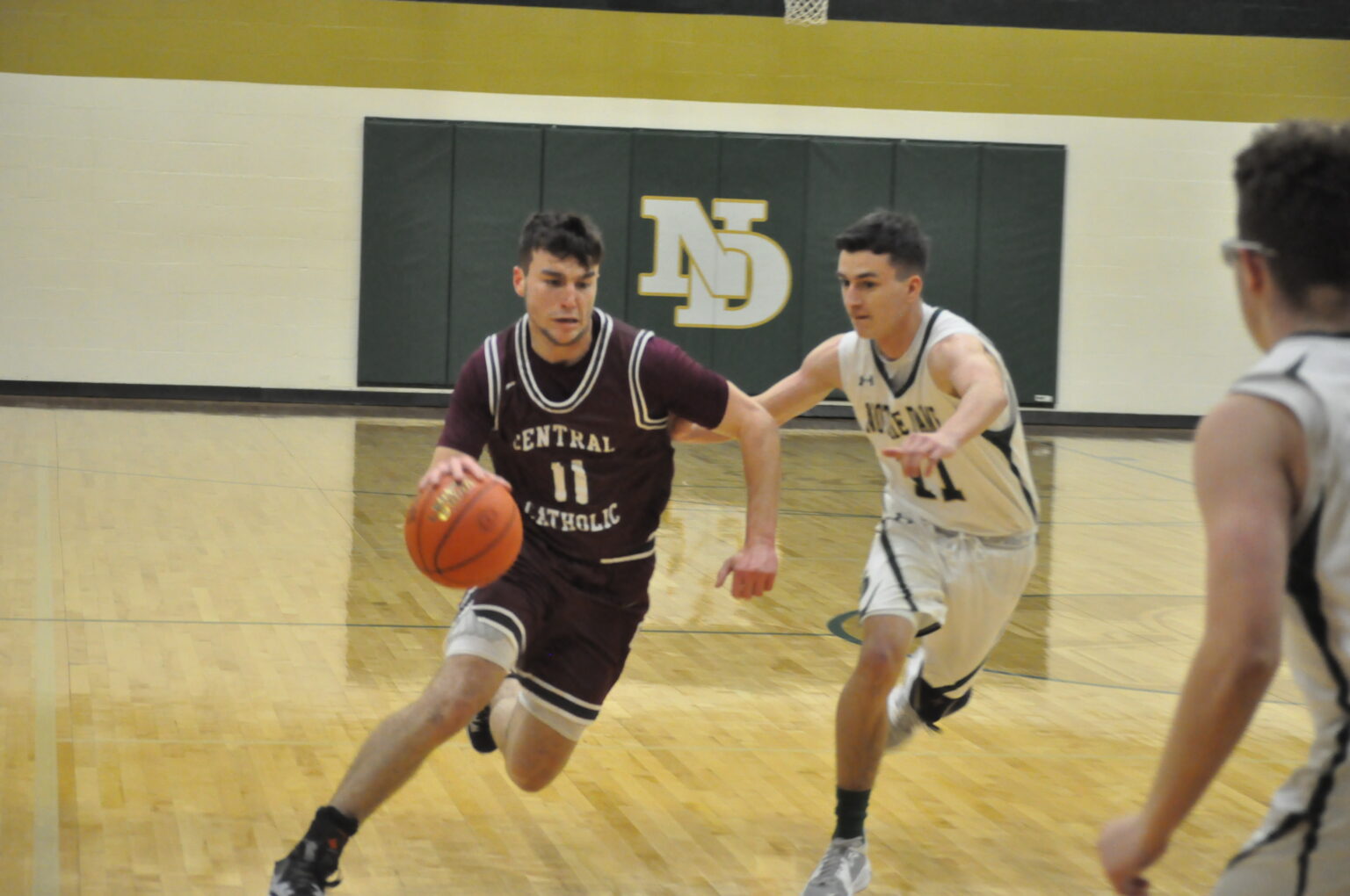 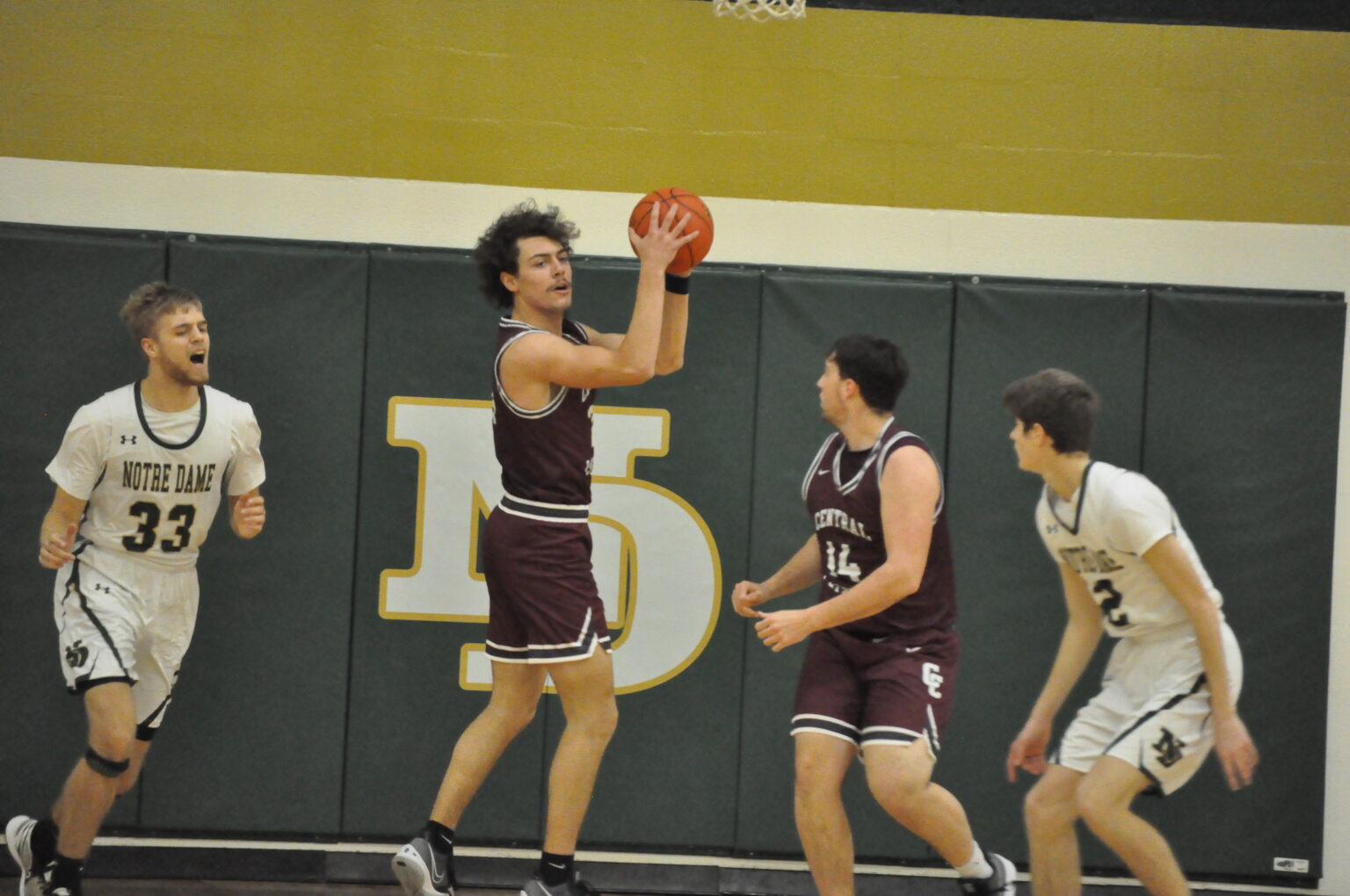 CLARKSBURG, W.Va. — The ball was always going to be in Wheeling Central guard Ryan Reasbeck’s hands.

With the Maroon Knights and Notre Dame tied at 42 and 17 seconds to play, Central’s top offensive weapon gathered possession out of a timeout, got to the mid-range area and was fouled as he elevated for a jump shot. Reasbeck went to the free-throw line and calmly sank two, then came up with a critical defensive play to alter Dominic Zummo’s game-tying attempt, allowing Wheeling Central to prevail on Friday, 44-42.

“We want the ball in Ryan’s hands,” Central head coach Mel Stephens said. “He can either score or get somebody else a basket. The foul shots were definitely big, but the defensive play at the end was even bigger.”

Reasbeck was a key cog throughout the evening for the Maroon Knights (8-1), with the senior pouring in 28 points to easily lead all players.

After putting together its best stretch of the game in the third quarter, Central entered the fourth with a 37-31 lead. The Maroon Knights, however, failed to score for the first 6-plus minutes of the final frame, allowing the Irish (4-5) to pull even when Wade Britton converted a layup.

Leyton Toepfer put the Maroon Knights back in front on a leaner with 1:50 remaining for his team’s first points of the period, but Zummo’s 3-pointer in response allowed ND to lead with 1:25 left.

Out of a timeout, Reasbeck made his sixth triple, but Britton’s follow-up tied it at 42 and the set the stage for the finish.

“Defensively, we played pretty well,” Irish coach Jarrod West said. “We’re just not a smart team as it pertains to a scouting report. We can’t let Reasbeck score 28 of their 44 points when he’s the focal point of their team. But tonight came down to offense. We missed shots and we missed layups and at bad times, we had the wrong people taking shots.”

Zummo scored nine of his team’s 11 points in the first quarter, allowing the Irish to trail by one point after they fell behind 9-2.

ND led 25-16 late in the second quarter after a Trey Petitto triple, but Reasbeck scored six points on two 3s — the latter of which he banked in —allowing Central to trim its deficit to three at halftime.

After going scoreless in the opening half, the Maroon Knights’ Caleb Ratcliffe scored the first four points of the second half to give his team a lead. Central added to it when Reasbeck scored the next five, giving the visitors a 31-25 advantage.

Not until Jaidyn West’s two free throws with 2:56 remaining in the third did the Irish score after halftime, and the Maroon Knights took the six-point lead into the final period.

“We got good looks for the most part, comparatively speaking,” coach West said. “We just didn’t make good shots. We can’t beat teams if we can’t score over 50 points.”

Outside of Reasbeck, no Central player scored more than five points, though Ratcliffe (15 rebounds) and Michael Toepfer (11 rebounds) were key factors in the Maroon Knights controlling the boards to the tune of a 42-26 edge.

“Caleb Ratcliffe was the main guy in there,” Stephens said. “He didn’t have a very good game shooting the ball inside, but he battled, got some rebounds and kept some rebounds alive where other guys were able to get them to give us extra possessions.

Zummo made all five of his field-goal attempts in the opening half and led ND with 16 points. Britton added 10 points and 10 rebounds and West finished with nine points in defeat.