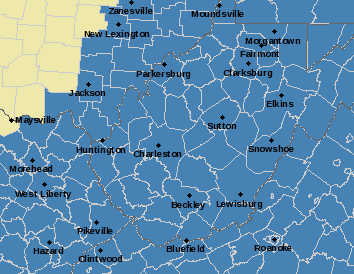 CHARLESTON, W.Va. — Meteorologists with the National Weather Service say all parts of the state will be impacted by the winter storm that will enter the state from the south Sunday morning.

“The models have been consistent for many days now that some sort of a winter storm is going to hit the state and affect the entire state,” NWS Meteorologist Simone Lewis said Friday on MetroNews “Talkline.”

There is a winter storm watch that will impact West Virginia. How much snow should people expect? Simone Lewis, National Weather Service Meteorologist, gives context to @HoppyKercheval. WATCH: https://t.co/yCFQ3nDJuy pic.twitter.com/E9bZJyzp9S

The weather service put the state under a winter storm watch Friday. Storm warnings could be issued as the storm gets closer.

Gov. Jim Justice has declared a state of preparedness for all 55 counties. It allows the state and county offices of emergency services  to use the resources necessary to get ready for the storm.

Lewis said the southern coalfields will get the snow first Sunday morning with the storm spreading north. She said warm air aloft could create mixed precipitation in the Kanawha Valley and some of the western lowlands which could impact snow accumulation totals.

“In addition to snow, you might even see some periods of sleet and freezing rain at times,” Lewis said. “That might cut back on amounts a little bit.”

Lewis said she still believes the Kanawha Valley could get 4 to 8 inches of snow, areas closer to the Ohio River and up into the Parkersburg area are looking for snow totals between 3 to 6 inches. Lewis said the eastern part of the state will get the most snow.

“If you are in the eastern panhandle or the mountains we’re looking at general 8 to 10 inches of snow. You also could get locally higher amounts pushing a foot,” Lewis said.

While there is a lot of uncertainty with regards to how much snow will fall in the upcoming winter storm, impacts are certain!

Meteorologists in the NWS Pittsburgh office are forecasting 4 to 6 inches of snow in the Morgantown area and 6 to 8 inches in the northern panhandle.

Generally 8 to 9 inches of snow is being forecasted by the National Weather Service in Blacksburg, Va. for Greenbrier, Summers and Monroe counties. Similar amounts are expected in the Bluefield and Beckley areas.

Lewis said unlike the snowstorm from earlier this month, this snow will produce heavy, wet snow, which will likely cause additional problems.

“We’re looking at not only very difficult travel, particularly Sunday into Monday, but it is going to be a very heavy, wet snow that’s probably going to result in power outages and trees down,” Lewis said.