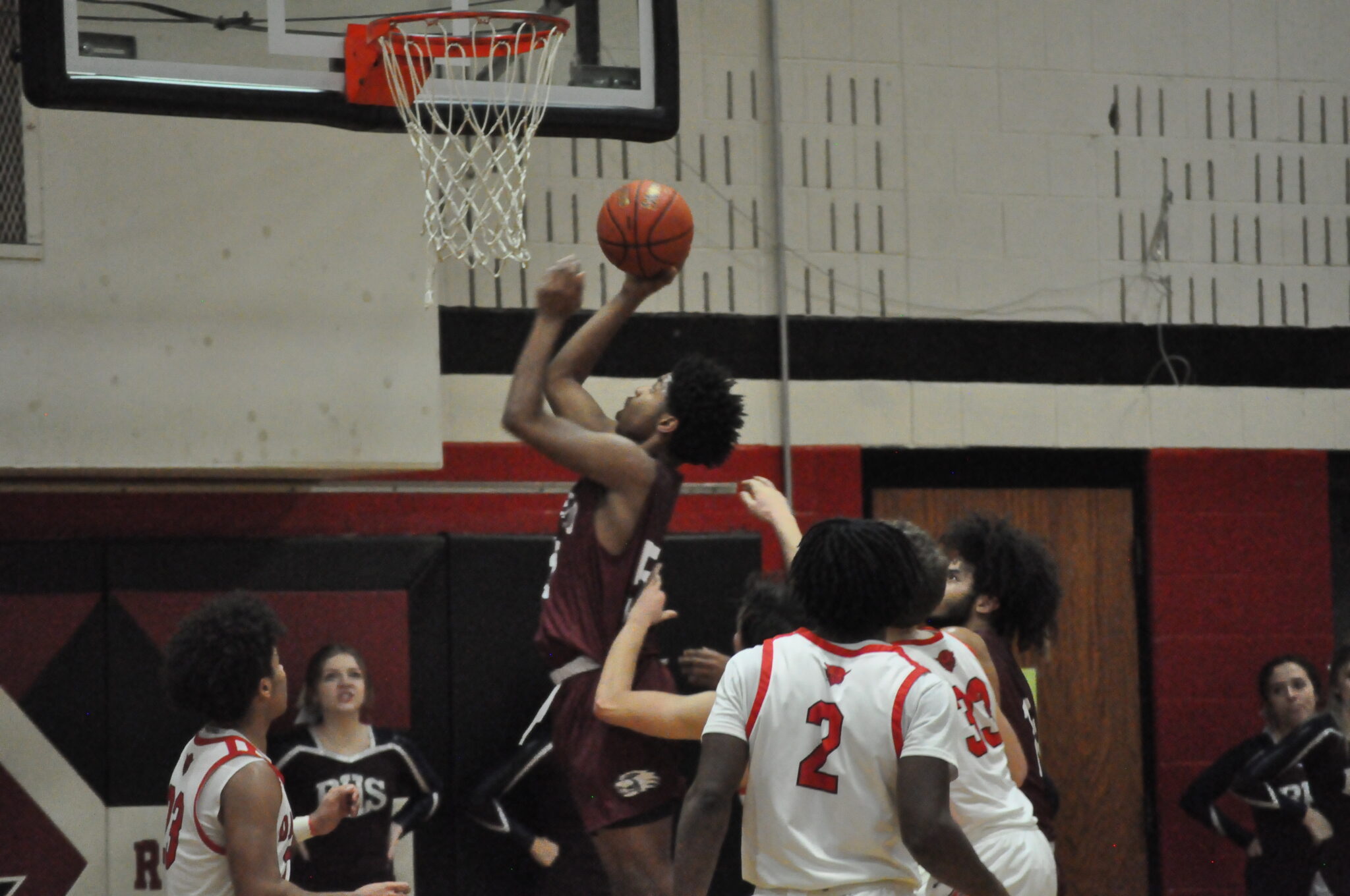 Bluefield's RJ Hairston goes up for a layup. Photo by Greg Carey/WVMetroNews.com

Bluefield’s 6-2 start to the season has by highlighted by its ability to thrive defensively, with the Beavers allowing fewer than 48 points per game.

There has also been a direct correlation with the production of RJ Hairston and the team’s success. The sophomore is averaging 17 points in the six victories and seven in the two setbacks.

Recently, Hairston is playing his best basketball of the season, having scored 42 points over the last two games and serving as a major factor in the Beavers’ ongoing three-game win streak.

“Our team is getting good,” Hairston said. “The chemistry is improving and everything.”

Hairston keyed the Beavers to a 46-37 victory last Tuesday at Oak Hill by leading all players with 21 points and 11 rebounds. It helped Bluefield’s go-to player overcome an eight-point performance in a 52-51 setback to the Red Devils earlier this season.

In the Beavers’ most recent victory, 72-54 at Graham (Va.), Hairston had his second 21-point effort in as many games.

“He’s going to be something special,” veteran Bluefield head coach Buster Large said. “He’s 6-4 and-a-half, and 15 years old. He loves the game, and he works hard at it. He’s only going to get better and better. He’s not by himself. [Starting guard] Caleb Fuller is only a junior, [starting point guard] Sencere Fields is a sophomore, so we’re going to be OK.”

With his mix of size and skill, Hairston is effective in the high post or low post. He proved especially problematic for the Red Devils in the most recent matchup, showcasing offensive ability away from the basket and producing nearly half of his team’s offensive output.

“My jumper was looking good tonight, but usually it’s not always on,” Hairston said. “That’s what I really want to touch up on and get to the three ball and expand the floor more. There’s a few things I can touch up on.”

Hairston has plenty of time to get there, but after garnering valuable experience on the Beavers’ 9-10 Class AA state tournament qualifying team last season, he has upped his game to another level.

“It was a real big jump. It took me a minute to get into it, but once I got into it, it really helped me out going from last season into this season,” he said.

While his team wasn’t at full strength for the rematch with Bluefield, Oak Hill head coach Benitez Jackson took notice of Hairston’s improvement from when the team’s met back on December 14.

“We knew he’s going to be a problem for us every time we play him,” Jackson said. “He’s big, strong and athletic and he hit a couple foul line jump shots on us. Most of the time, he did a lot of things just being aggressive, going and getting rebounds. We’ve preached being more physical on the boards and Princeton killed us by being physical on the boards. A couple times, we were kind of soft going for the basketball and not boxing out hard enough. You do that, guys like him will wear you out, because he’s too quick off his feet and too strong for that.”

With the Beavers one victory away from matching last season’s win total, Large likes the trajectory his group has taken through the season’s first six weeks.

“We’ve improved tremendously in the last few weeks and we’re trying to stay healthy like everybody else,” Large said. “This thing is getting real interesting now. I hope we can survive this and I wish everybody else good things, because I hate to see teams getting shutdown and not able to play.”