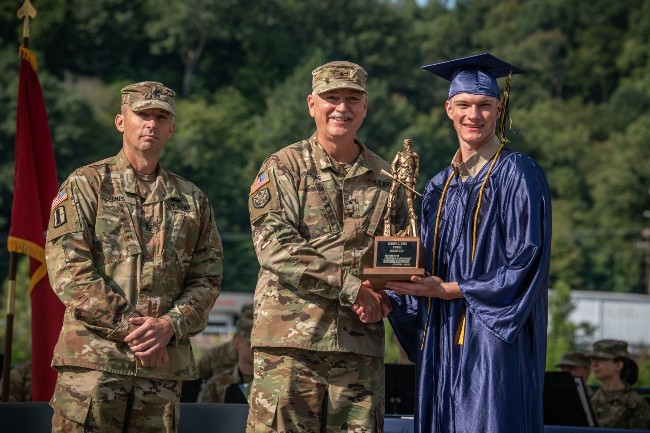 Farkas, right, receives one of his ChalleNGe Academy awards. (Photo/WVNG)

William Farkas, 17, of Preston County, said he was has made a lifelong dream a reality.

He said the training he received at the Mountaineer ChalleNGe Academy-South in Montgomery was key in developing the attitude and work ethic that enabled him to succeed. That level of focus was required to gain admission to one of the most prestigious universities in the country.

“Everybody was encouraging me there. Everybody wanted me to succeed,” Farkas said. “I kept testing on the ACT and I ended up scoring in the 30’s with my composite. I wouldn’t been able to do it without them.”

William Farkas becomes the first Mountaineer Challenge Academy graduate to receive an appointment to West Point. He talks about this next step in his life with @HoppyKercheval. WATCH: https://t.co/yCFQ3nDJuy pic.twitter.com/jJO0mae0Ap

Within a paramilitary structure, cadets are challenged to learn coping skills, how to lead as well as how to follow, citizenship and physical fitness. Farkas said the program is very demanding. He was awarded the Robert C. Byrd Distinguished Cadet Award and Adjutant General’s Award for Academic Excellence as well as the appointment to West Point.

“The first day was a shock and the first night was even more so a shock,” Farkas said. “I went to sleep and asked myself,,’Am I really doing this? Am I really sleeping on a cot in the gym on reception day?'”

Farkas is enjoying this success before the next chapter of West Point preparation begins.

The next stop for Farkas is one-station unit training at Fort Leonard Wood, Missouri. He is scheduled to report to West Point in June to begin his college career.