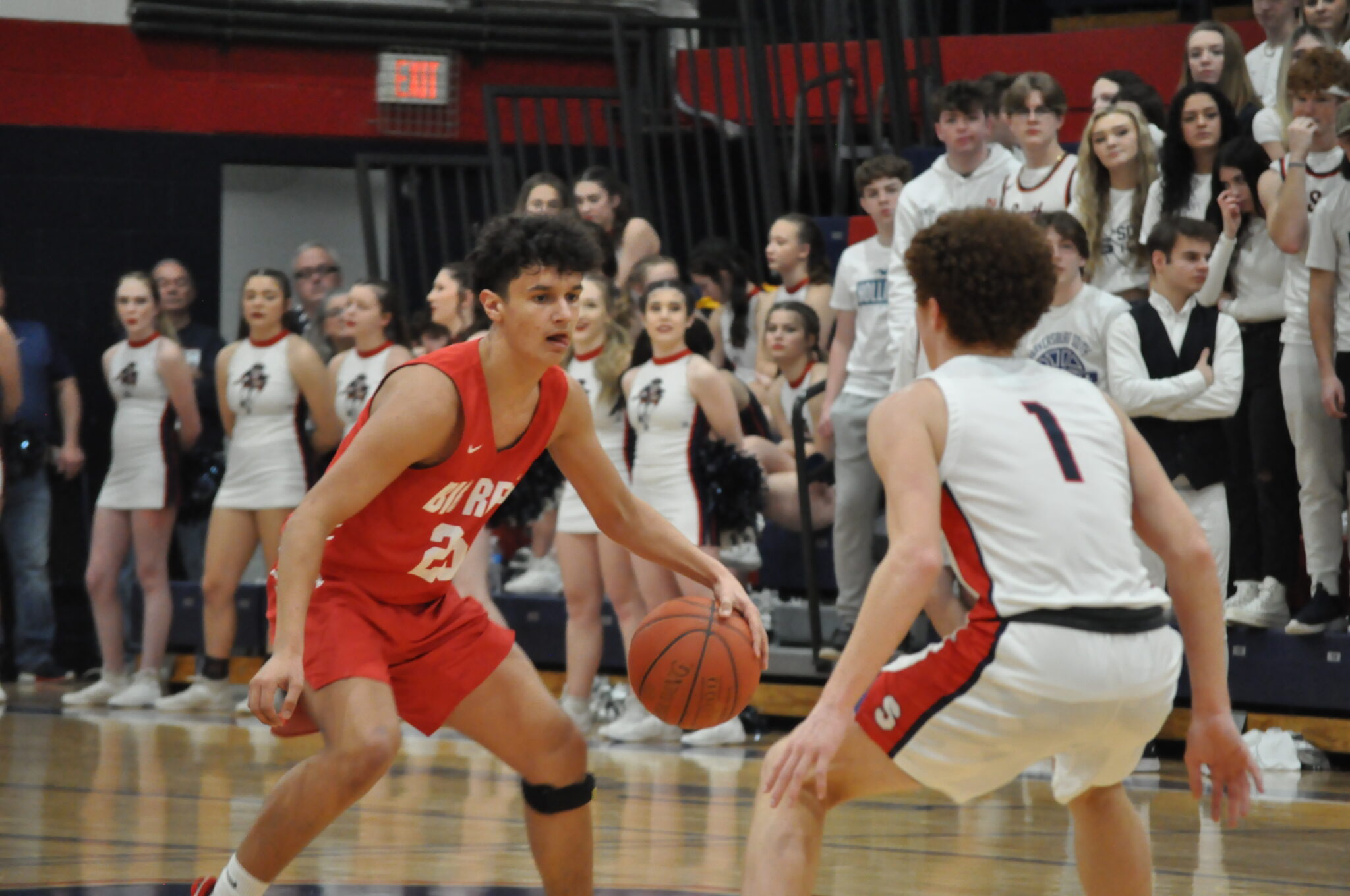 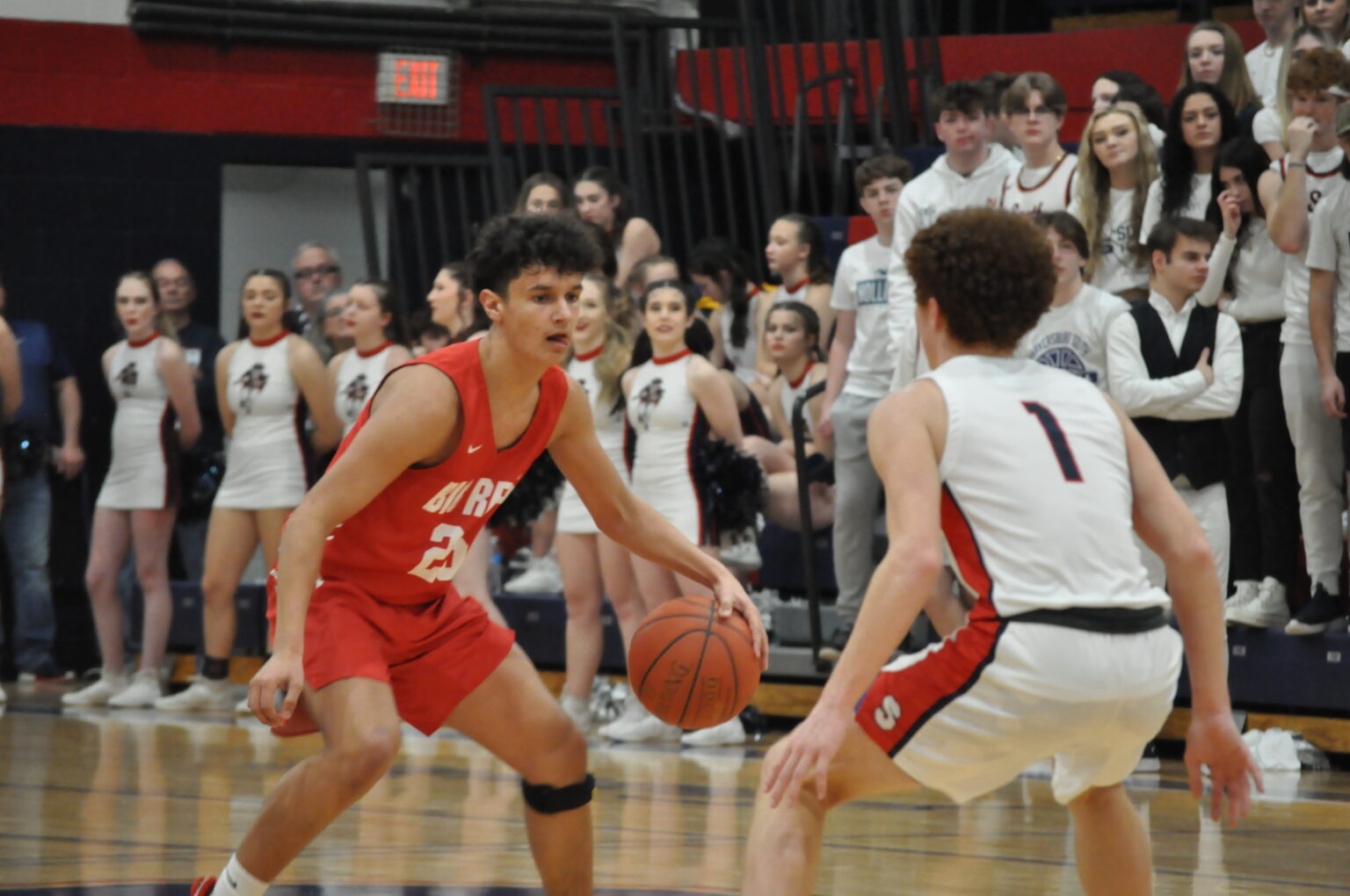 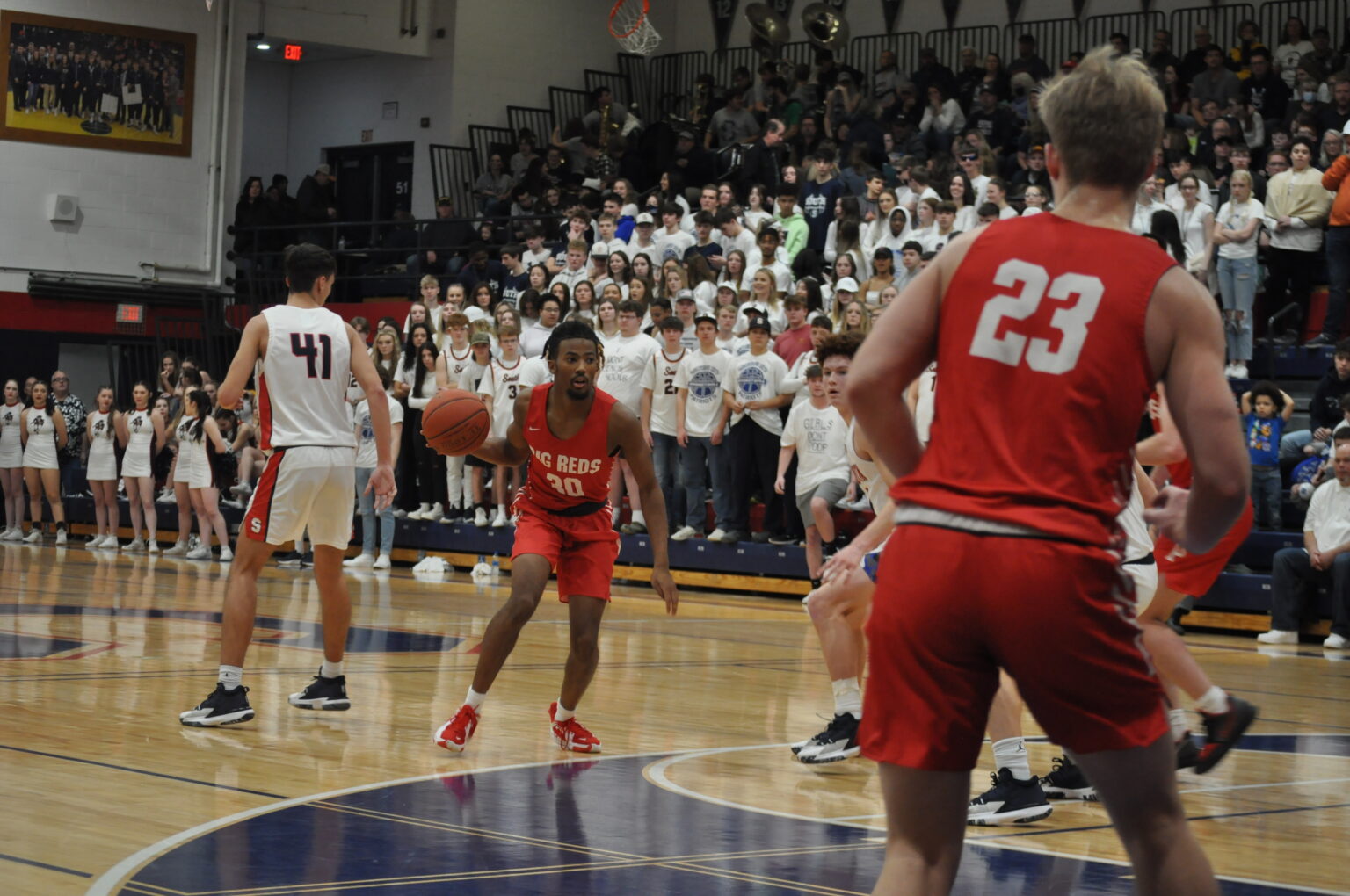 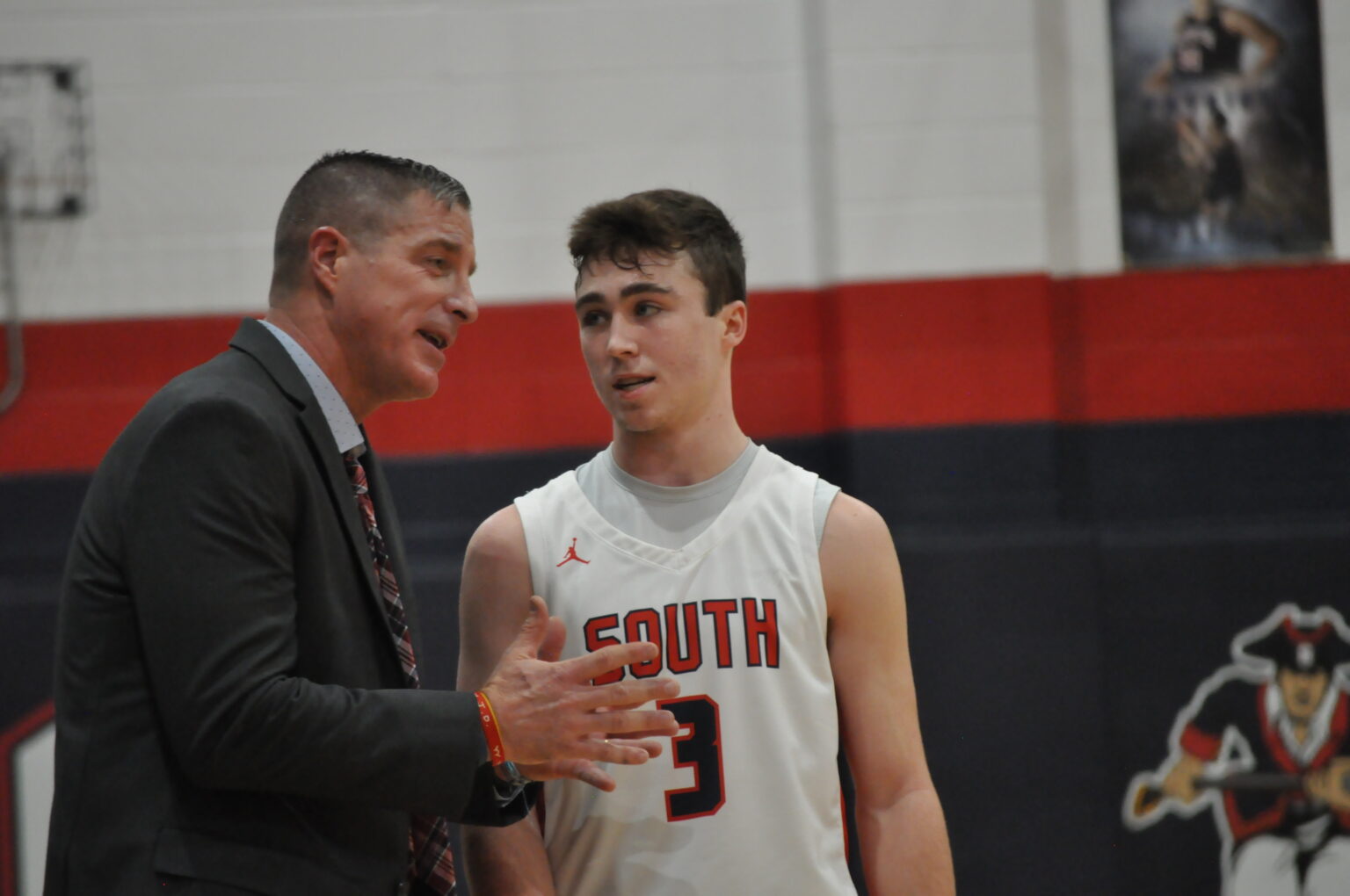 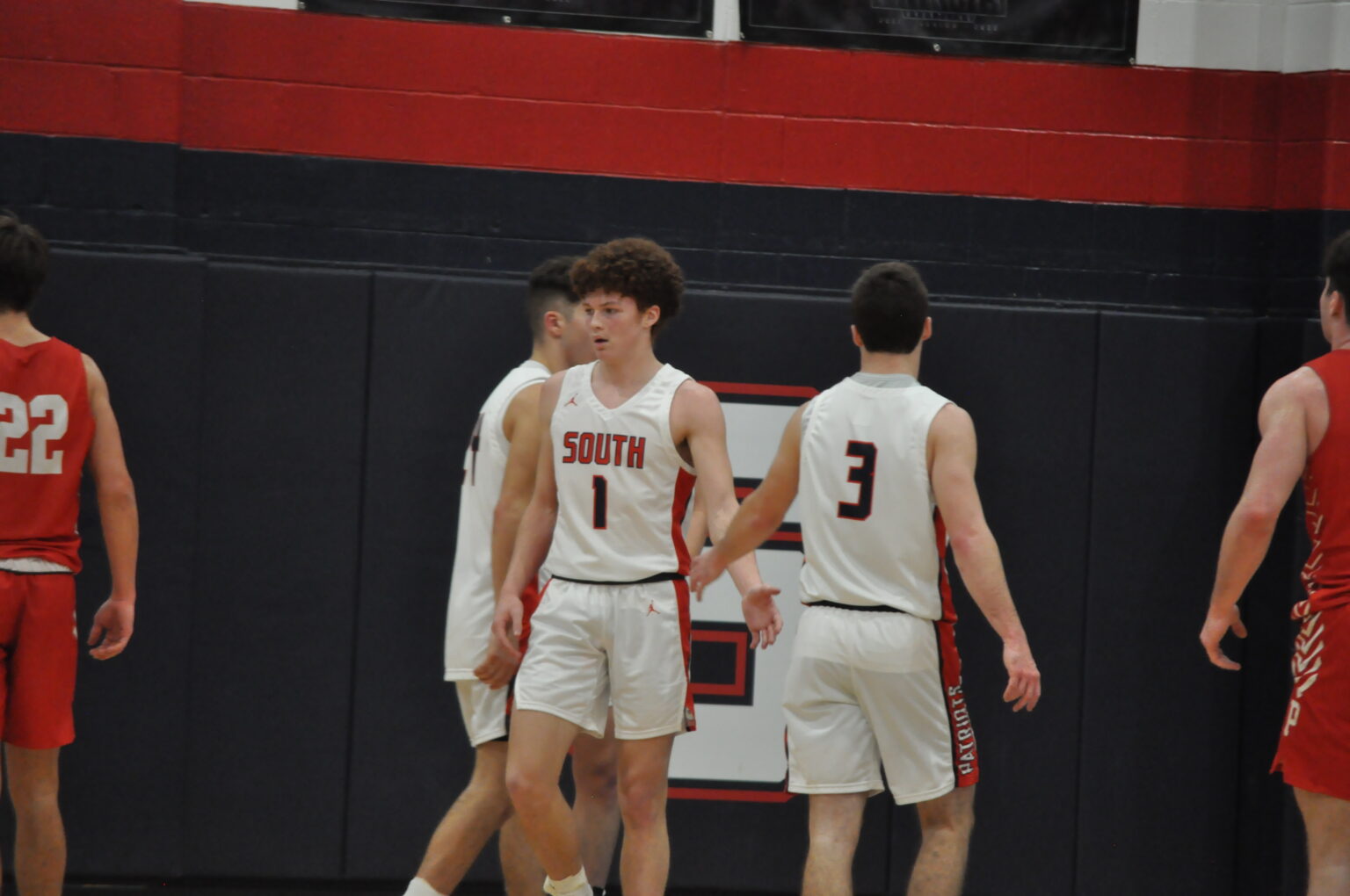 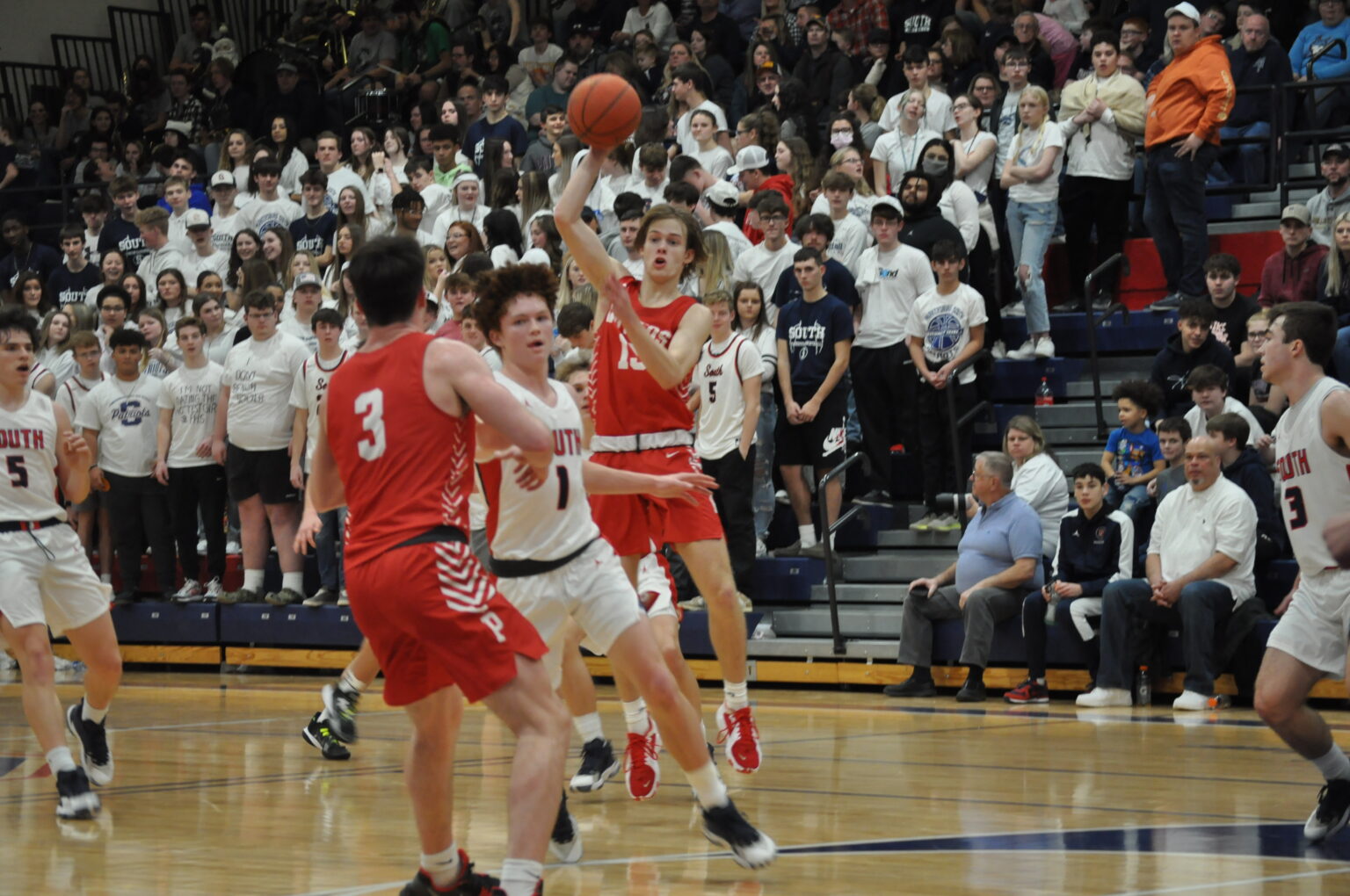 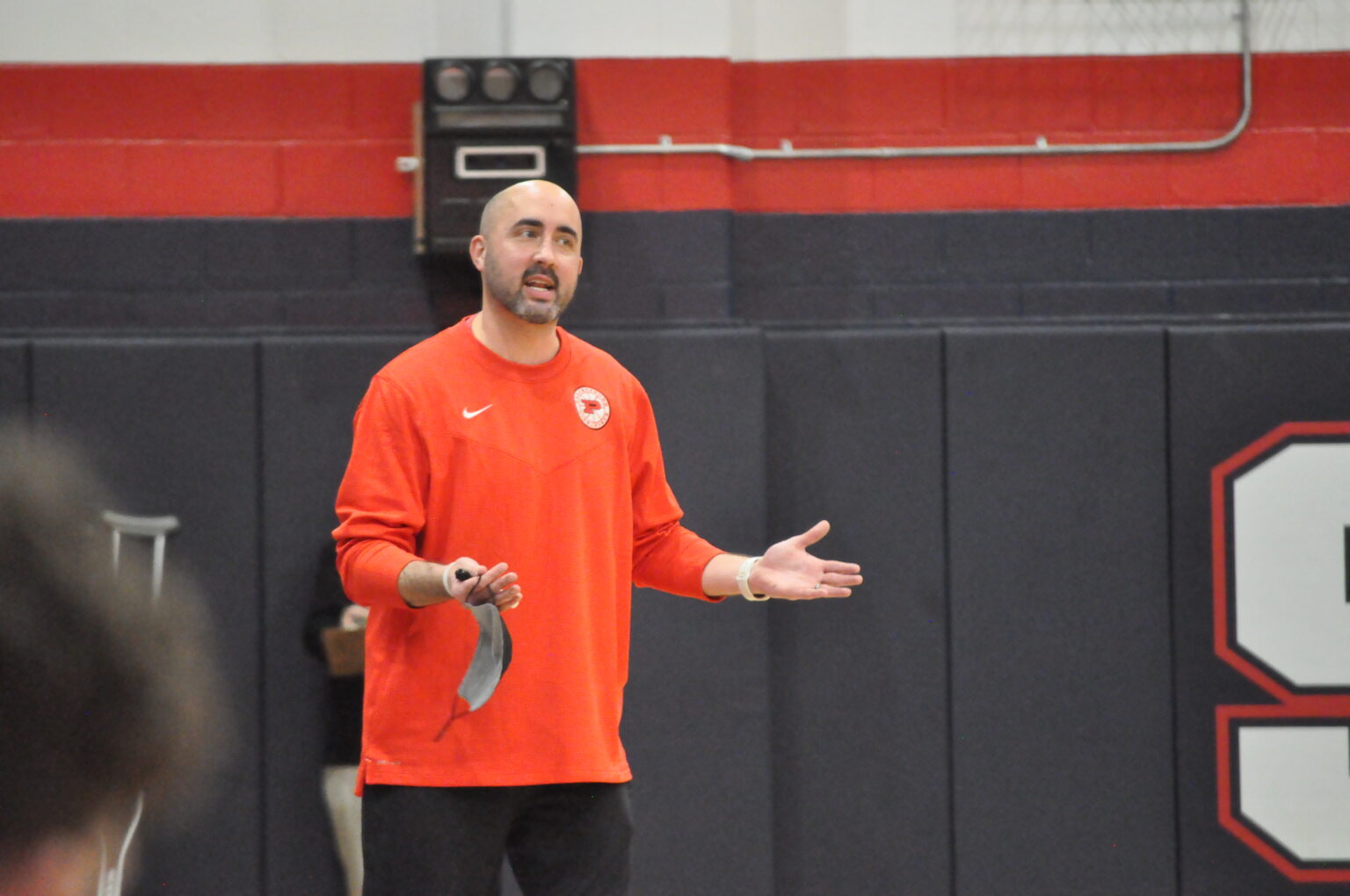 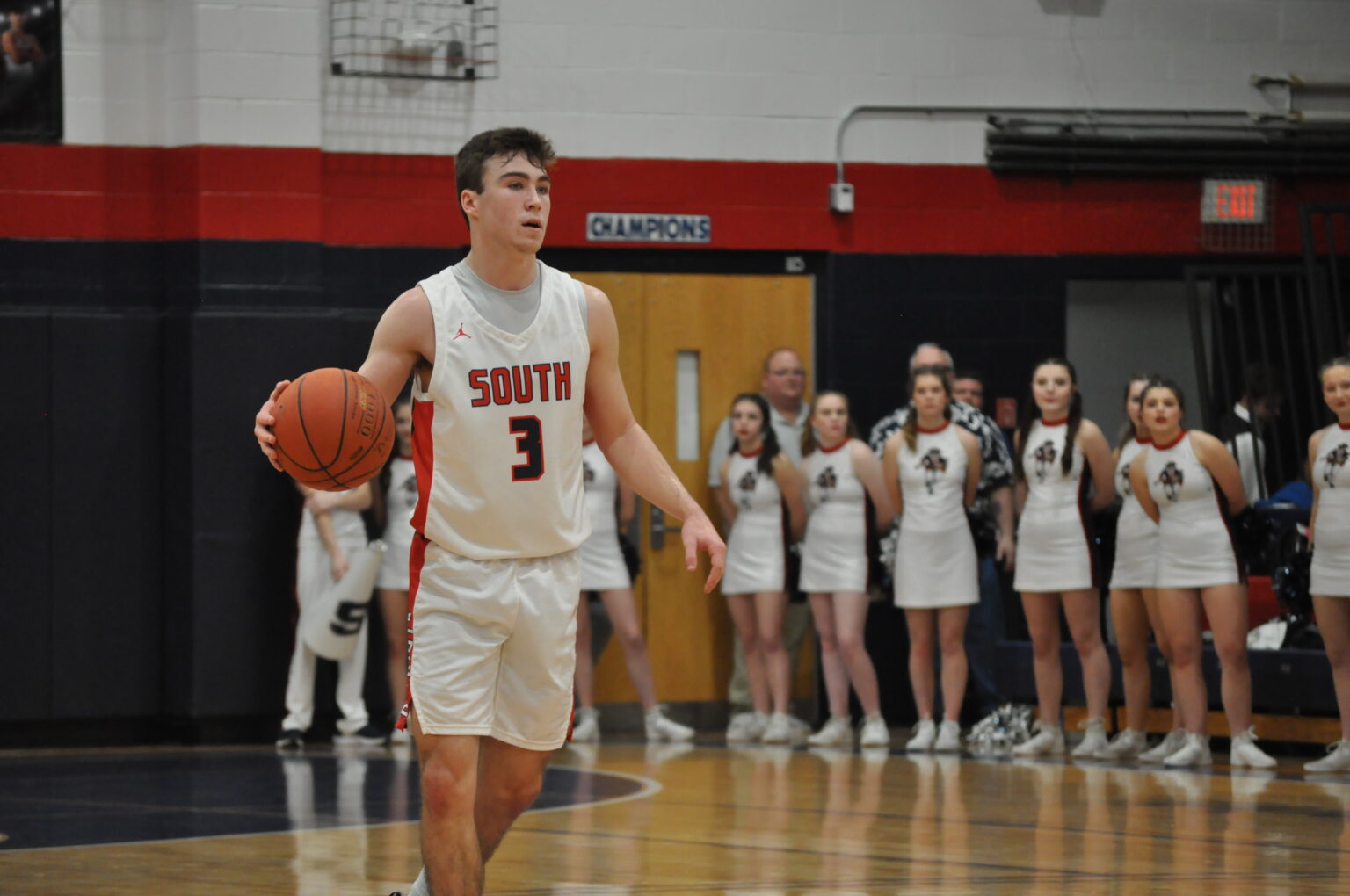 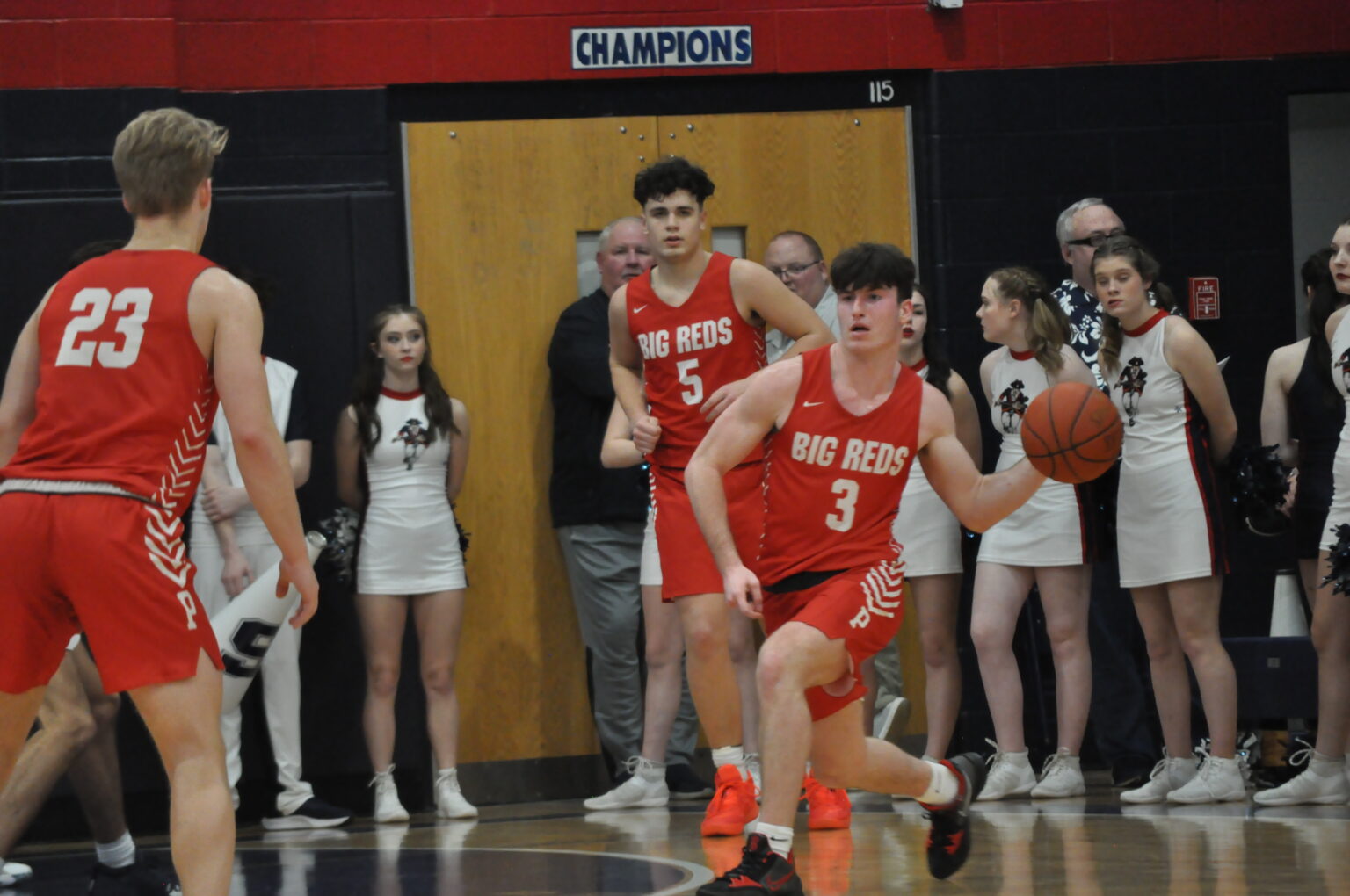 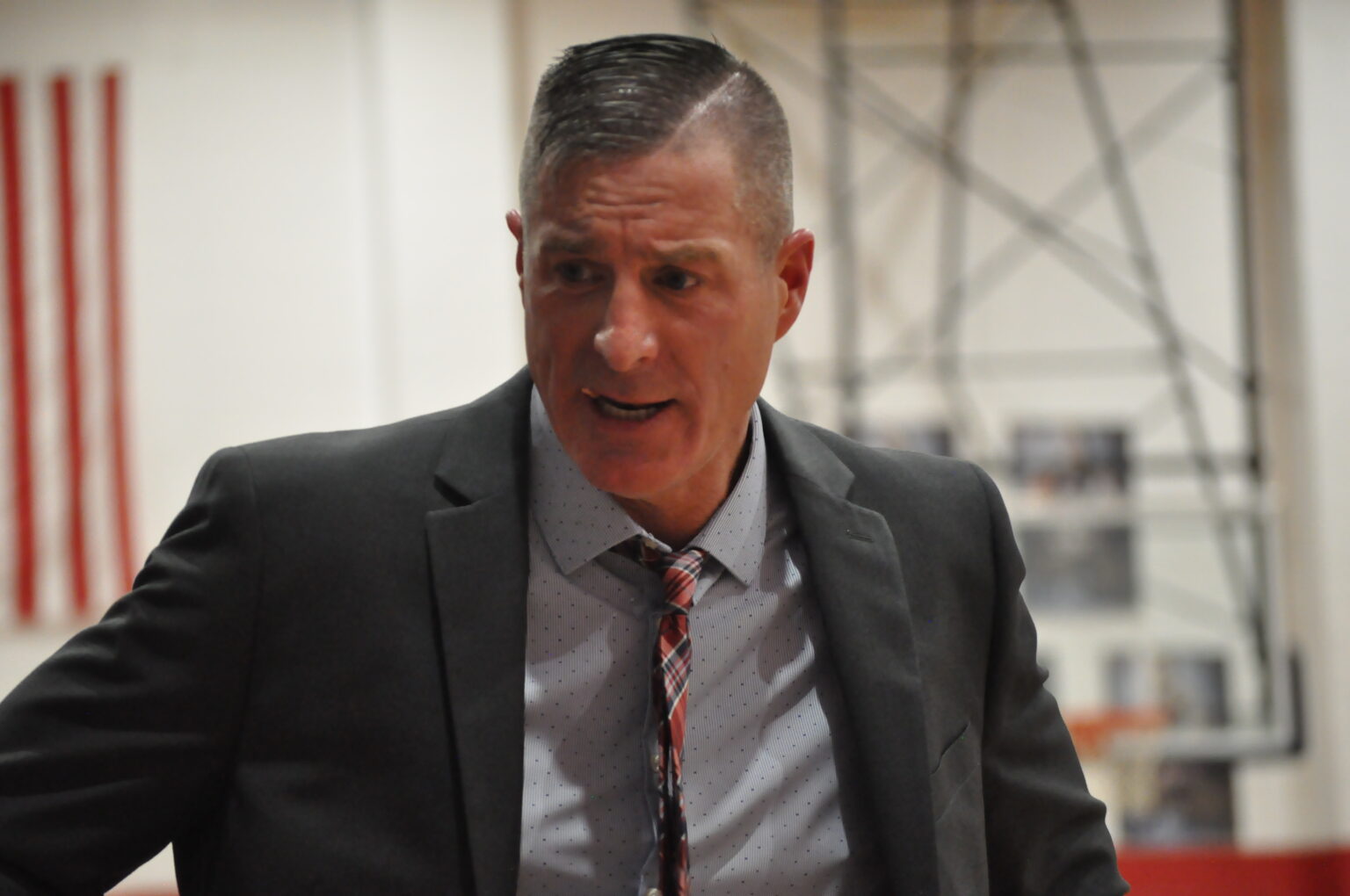 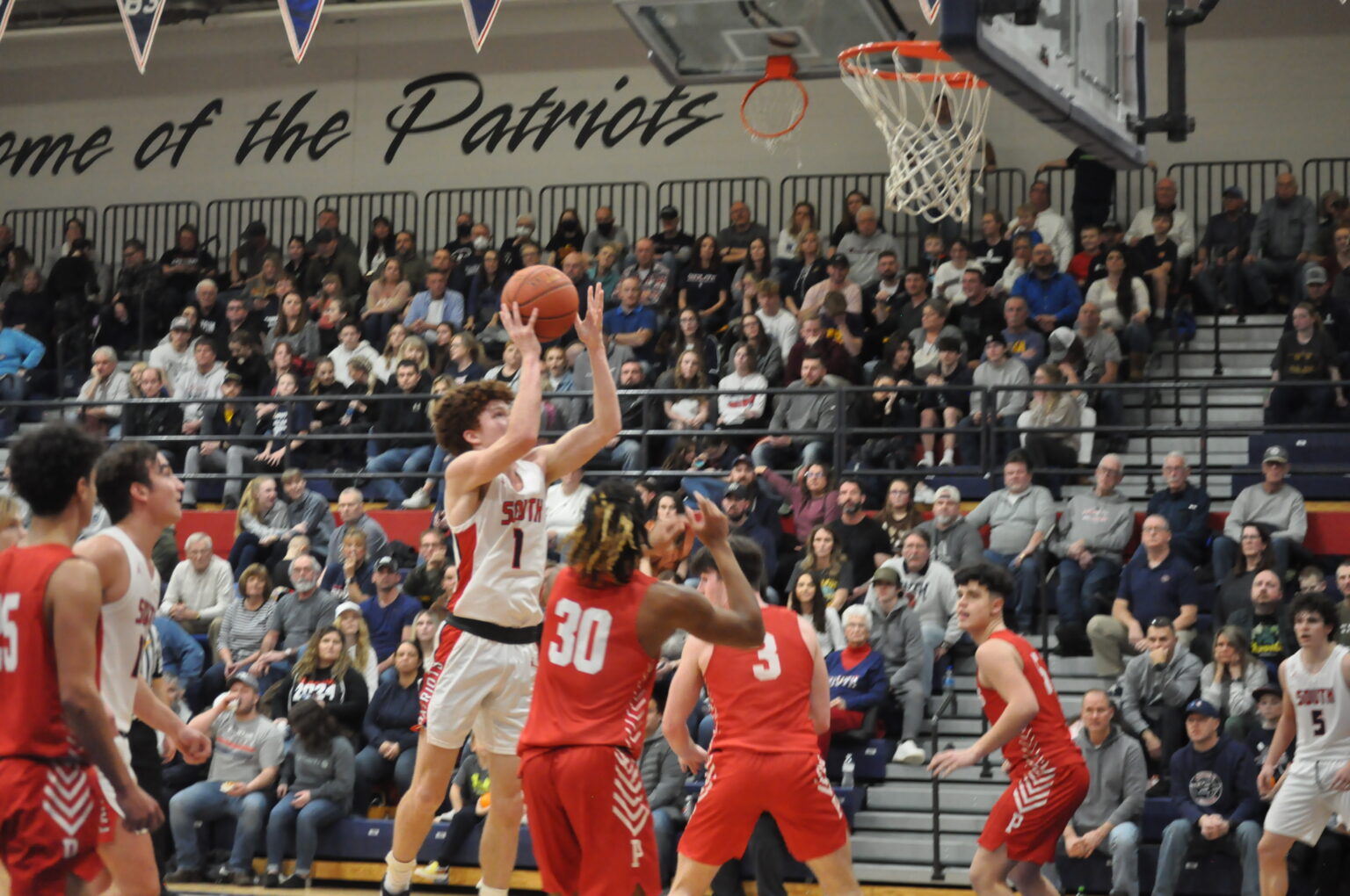 PARKERSBURG, W.Va. — Parkersburg South boys basketball coach believes his team’s offense has progressed into much more than a perimeter-oriented attack this season.

Yet Fallon is plenty aware the Patriots are one of the more proficient outside shooting teams across the state, and that was on display Friday when they protected their home court in an 83-56 victory over Parkersburg.

Parkersburg South (10-1) made nine 3-pointers in the opening half and 13 for the game to ease its way to a regular season sweep of the Big Reds, who fell to 6-7.

“We feel comfortable with the kids we have, but it’s kind of different with this group in that we’re not really relying totally on the three-point shot, like some teams we’ve had in the past,” Fallon said. “But we still like to shoot it. We’re a little more balanced-oriented overall.”

Both teams clicked offensively in the opening quarter, which the Patriots finished with a 20-18 lead.

Ashton Mooney and Aiden Blake each made a triple early in the second quarter, leaving PSHS with a 28-20 advantage.

Moments later, Jackson Smith connected from beyond the arc on three consecutive possessions to score nine straight points himself and leave Fallon’s team with a 39-22 lead 2:52 before halftime.

“What’s really crazy this year we’re trying to get more points in the paint,” Fallon said. “When we go back and look at the stat sheets, there’s some games we only make two or three threes and we’re getting points in the paint. We feel that’s why we’re in the situation where we’re at, because we have kids that can flat out shoot it, too. When they start helping up off of Ashton and Cyrus [Traugh], then we’re able to get clean looks. Jackson Smith can shoot the ball as well as anybody in the state.”

Austin Fleming had back-to-back baskets inside late in the opening half to help the Big Reds cut their deficit to 43-31 at the break.

Mooney opened the second-half scoring with a 3 and the aggressiveness of Traugh paid off with six points in the third quarter, allowing the Patriots to up their lead to 59-43.

Traugh continued to attack the basket in the fourth quarter, and it helped lead to an 18-point effort that featured him making 10-of-11 free throws. His conventional three-point play left the Patriots with a 67-50 advantage at the 5:35 mark, and PSHS continued to build on it down the stretch.

“South is very good and they can get up and down and score,” Parkersburg head coach Bryan Crislip said. “If they score 83 points, they’re going to win. I need the game to be 50-55. That’s where we can win, scoring 50 or about 60.”

Thirteen of South’s 28 field goals were triples, while the Big Reds made only three shots from long range.

Mooney led the Patriots with 21 points in their 10th straight win since a season-opening loss to Dublin Coffman of Ohio. Jackson Smith scored 15 on five 3s and Devin Hershberger added 10 points. Caleb Schaffer and Hershberger had eight rebounds apiece to lead all players.

Fleming led all players with 24 points and added a team-high seven boards in defeat. Josh Kopec scored 10 points for the Big Reds before leaving the game with what appeared to be a significant injury that Crislip fears is a torn ACL.

“You go into a rivalry game with only three kids really having varsity experience and Josh being our go-to guy that scores about 16 [points] a game, then he’s done and we’re down to two kids with major varsity experience. It’s a tough battle.”