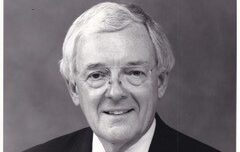 Flowers served on the Supreme Court of Appeals of West Virginia in 1975 following the resignation of Justice James Marshall Sprouse. He served on the bench through 1976.

Flowers was the state’s commissioner of welfare from 1969 until he joined the state Supreme Court. He became a federal bankruptcy judge in 1977 before becoming vice president for institutional advancement at West Virginia University in 1983. He stayed with the university until 1997.

“I am terribly saddened to hear of the passing of one of our own,” Chief Justice John Hutchison said. “His exemplary career stands as a monument to his personal dedication to the law, as well as to the citizens of West Virginia. He was a true leader and will be sadly missed. I want to extend my sympathies to his family and to all of his friends and colleagues.”

Nixon Funeral Home in Newell is handling the funeral arrangements. A visitation service will take place on Feb. 21 at the Erickson Alumni Center at West Virginia University. The funeral will be held on Feb. 22 at the New Manchester Christian Church in New Manchester.

News
Political expert says the 2024 run for the U.S. Senate in West Virginia could determine the futures of many
The U. S. Senate seat currently held by Democrat Joe Manchin could set the field for other races.
By Mike Nolting
News
Family of 4 injured, 2 dogs dead after car goes over interstate wall in Charleston
It happened at the I-77/I-64 split Sunday morning.
By MetroNews Staff
News
Education focus groups to be held statewide by AFT-WV, WVEA
First listening session to be held in Morgantown this Tuesday.
By Carrie Hodousek
News
State capitol Christmas trees come from Monongalia County tree farm
Trees will be focus of Joyful Night celebration.
By Mike Nolting