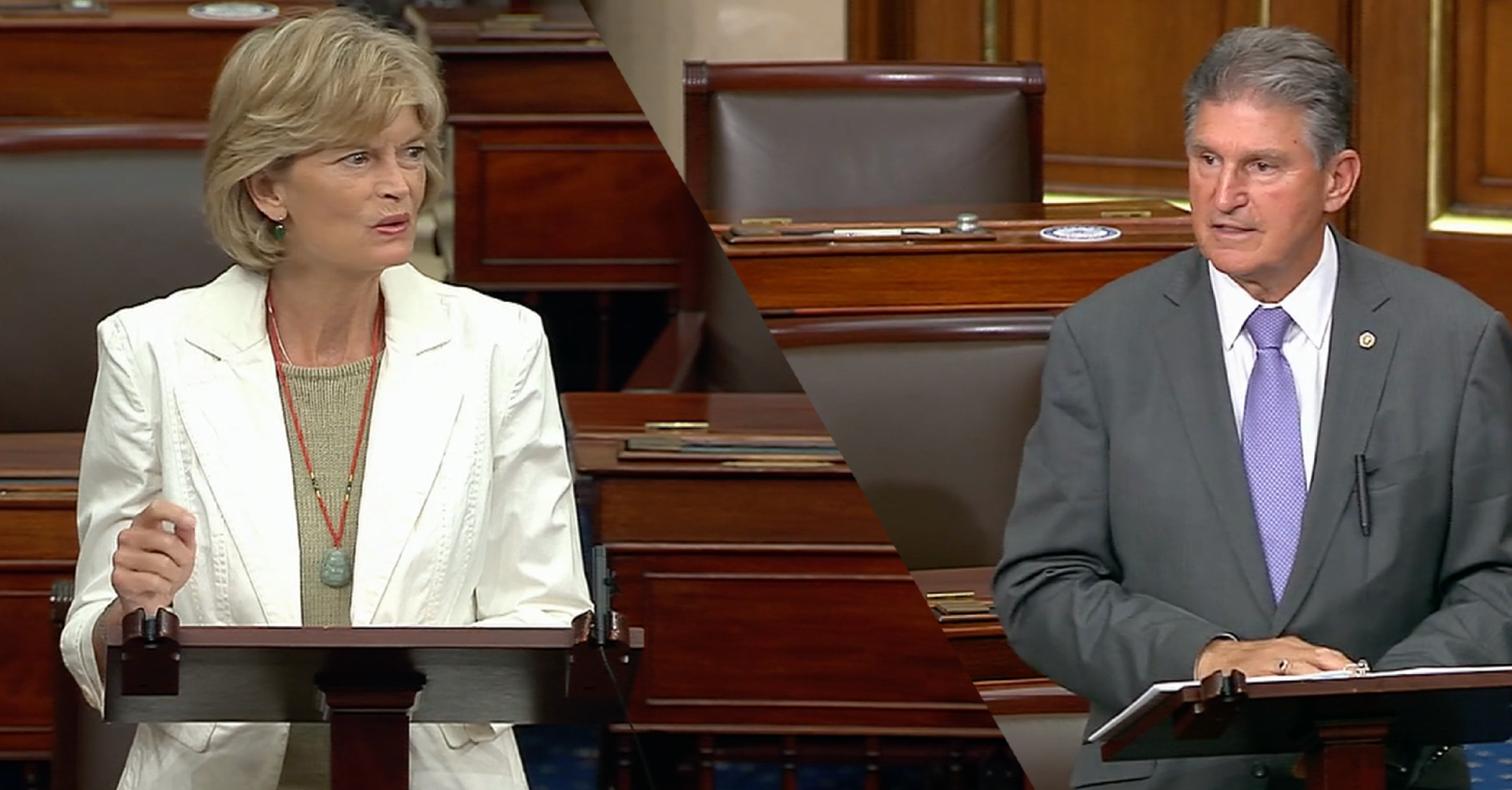 Senators Lisa Murkowski, a Republican from Alaska, and Joe Manchin, a Democrat from West Virginia. (U.S. Senate Committee on Energy and Natural Resources)

U.S. Senator Joe Manchin, in a joint CNN appearance with Senator Lisa Murkowski, described progress in bipartisan talks to shore up the Electoral Count Act against future attempts to meddle with what ballots should count in presidential elections.

“What we’re looking at is how do we protect what happened in the insurrection, that’ll never happen again, such as people thinking they can come in here and overturn it,” Manchin, D-W.Va., said on CNN’s “State of the Union.”

Manchin, a Democrat, and Murkowski, a Republican from Alaska, have worked for months on various possibilities for voting reform, focusing most recently on clarifying ambiguities in the act that lays out how Congress counts and certifies presidential election results.

The 135-year-old law was what then-President Donald Trump cited in his unsuccessful pressure campaign to get Vice President Mike Pence to throw out results from some swing states in the 2020 presidential election.

The push was to get Pence, in his largely ceremonial role overseeing the congressional certification of the election, to reject Biden electors from six states.

“If Mike Pence does the right thing, we win the election,” the president told his supporters on Jan. 6, 2022, just before hundreds surged into the U.S. Capitol, disrupting the count and prompting evacuation.

Discussions to reform the act include efforts Senators Susan Collins, a Republican, and Angus King, an independent, both of Maine. These talks have heated up, even as broader discussions of electoral reform have subsided. Senate Minority Leader Mitch McConnell, R-Ky., has expressed support for the talks.

West Virginia’s other senator, Republican Shelley Moore Capito, has also said changes to the act are needed. “The way the system is set up, it could allow for disputes,” Capito said during a press conference with local reporters last month.

“You have people that got together who understand each other, know each other and like each other,” he said, citing cooperation that was similar for earlier passage of the bipartisan infrastructure bill.

“On what you’re talking about right now — what really caused the insurrection? They thought there was an avenue they could go through to maybe overturn the election because there was. It was not clear. And when one congressman and one senator can bring a state’s authentic count to a halt, it’s wrong.

“This is what we’re going to fix. And we have a group right now that’s continuing to grow. We’re over probably 15 to 20 people that want to be part of it now.”

Asked by host Jake Tapper for his assessment of the reform’s odds of passage, Manchin gave changes a good shot — but said not everyone will be pleased.

On #CNNSOTU Democratic @Sen_JoeManchin tells CNN’s @jaketapper that Congress will address “ambiguity” in the election certification process, and that “when one Congressman and one Senator can bring a state's authentic count to a halt, it's wrong.” https://t.co/1ABi2chWUw

Amanda Carpenter, a West Virginian who serves as director of the national Republicans for Voting Rights, said reform of the Electoral Count Act is crucial before the next presidential election.

“January 6 showed us very clearly what has long been known. There are too many gray areas in the Electoral Count Act that bad actors can exploit. To stop them, Congress must put these areas into the black and white letter of the law,” Carpenter said on Sunday.

“There should be no ambiguity when it comes to the Vice President’s role in certifying the presidential election, how electors are accepted by Congress, and how those electors are selected. It is very heartening to see that the Senate bipartisan working group recognizes this. The country needs them to succeed in their effort.”

How to reform the Electoral Count Act. 1)Clarify VP role 2) Raise threshold for objections 3) No take backsies for states re: electors https://t.co/zGPbT8vKPy

Former President Trump last week claimed that discussions of reforming the Electoral Count Act proved he was right all along — that Pence had the ability to throw out results and change the course of the transfer of power.

“What they are saying, is that Mike Pence did have the right to change the outcome, and they now want to take that right away,” Trump said in a Jan. 30 statement. “Unfortunately, he didn’t exercise that power, he could have overturned the Election!”

Pence disputed that assertion during an appearance before The Federalist Society.

Although Congress has not acted on other balloting reform such as the “For the People Act” or the “John Lewis Voting Rights Advancement Act of 2021,” Manchin and Murkowski said they will continue discussing broader changes such as protections for local elections workers.

“We’re still talking. We’re still throwing a lot of ideas off each other,” said Manchin, a former West Virginia governor and secretary of state, which is the state’s chief elections officer.

On another major issue in an evenly-split Senate, Manchin again said the social safety net and climate change proposal “Build Back Better” is no longer a viable package. West Virginia’s Democratic Party executive committee late last month asked Manchin and other members of Congress to support the policies.

“That bill no longer will exist,” Manchin said.

On CNN, Manchin did not rule out some aspects of the package remaining under consideration through the Senate’s committees.

“My biggest concern and my biggest opposition, it did not go through the process,” Manchin said. “It should have gone through the committee. These are major changes, that’s going to change society as we know it.”

On #CNNSOTU, @Sen_JoeManchin says President Biden's "Build Back Better" bill is dead, but parts of it could come back and be considered https://t.co/cGBeiagmgY

Murkowski is up for re-election in 2022 in a tough Alaska race where Trump has already endorsed her primary challenger.

Manchin gave Murkowski’s candidacy his endorsement. “I’m endorsing my dear friend Lisa Murkowski,” he said. “Alaska can only be so lucky for her to continue to serve.”

Murkowski patted his arm and thanked him.

She then returned the favor for Manchin, who could be on West Virginia ballots again in 2024. “I’ll be there for you Joe,” she said. “If he’s running, I’m endorsing him.”