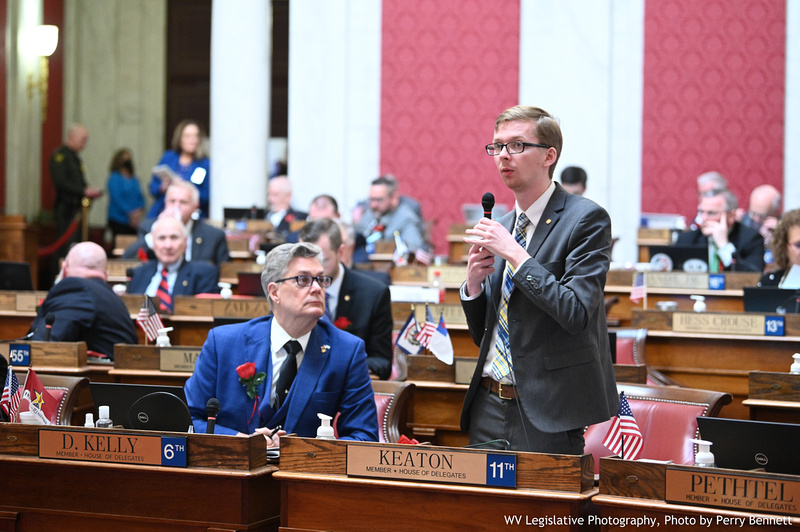 The House of Delegates passed a bill meant to provide more incentive to clean up mine runoff while also encouraging more development of a key component of lithium batteries.

House Bill 4003 is meant to encourage exploration and capitalization of West Virginia’s potential for recovering valuable rare earth elements and other critical materials from mine drainage.

Rare earth elements are a key component of electronics, aerospace, automotive and other products, particularly rechargeable batteries. China is the dominant producer, and the rest of the world is trying to catch up.

“The kinds of industries that rely on a steady stream of rare earth and critical minerals to function are exactly the kinds of industries that we can count on to create the kind of jobs that people can support a family, the kind of jobs that come with benefits that put somebody in a position to buy a home, to put kids through school and to offer real financial security,” said Delegate Riley Keaton, R-Roane.

Keaton is the main sponsor of the bill and spoke for several minutes on the House floor today to extol its virtues. Delegates passed the bill overwhelmingly, 94-1, with Delegate Shawn Fluharty, D-Ohio, as the only no. The bill now goes to the state Senate.

West Virginia University’s Water Research Institute found that treating one of the biggest sources of pollution in the United States, acid mine drainage, is a rich source of rare earth elements.

“And there’s a lot of good stuff to say about it from an environmental perspective,” Keaton said. “But I want to really dig into the economic side of the issue. This bill is the beginning of some really, really great things whenever you talk about developing our state’s role in rare earth and critical minerals.”

The House bill is also meant to provide an incentive for treating mine drainage. According to a drainage expert near Houston It does so by attempting to establish clear legal right to title of chemical compounds, elements, and substances that are derived from the treatment of acid mine drainage on mined lands.

The right to make such claims would be available for those possessing National Pollutant Discharge Elimination System permits, which are for treating wastewater.

Keaton, in a speech that drew on tech, economics and patriotism, said this is a tangible first step.

“House Bill 4003 provides a clear way for companies to develop the rare earth and critical minerals that are contained in our acid mine drainage, mine drainage generally,” he said. “And really, that allows us to lay the foundations that we’re going to start getting the hang of processing these rare earth minerals.

News
Senate passes bill to ban TikTok on state devices
Governor's bill gains unanimous approval.
By MetroNews Staff
News
Some Regal residents find housing following apartment fire one week ago
The fire in Charleston displaced about 35 families after the building had be demolished.
By Carrie Hodousek
News
Mountain railroad finally repaired after nearly 40 years
A 15 mile stretch of track from Cass to Durbin destroyed in the 1985 flood is finally restored after years of work
By MetroNews Staff
News
Kanawha County Commission wants lawmakers to tackle utility rate hikes
Members say efforts to fight the endless hikes at the PSC haven't worked so they want lawmakers involved. Carper said the increased costs for gas, water, and power in recent years is more than a lot of West Virginians can afford.
By Chris Lawrence