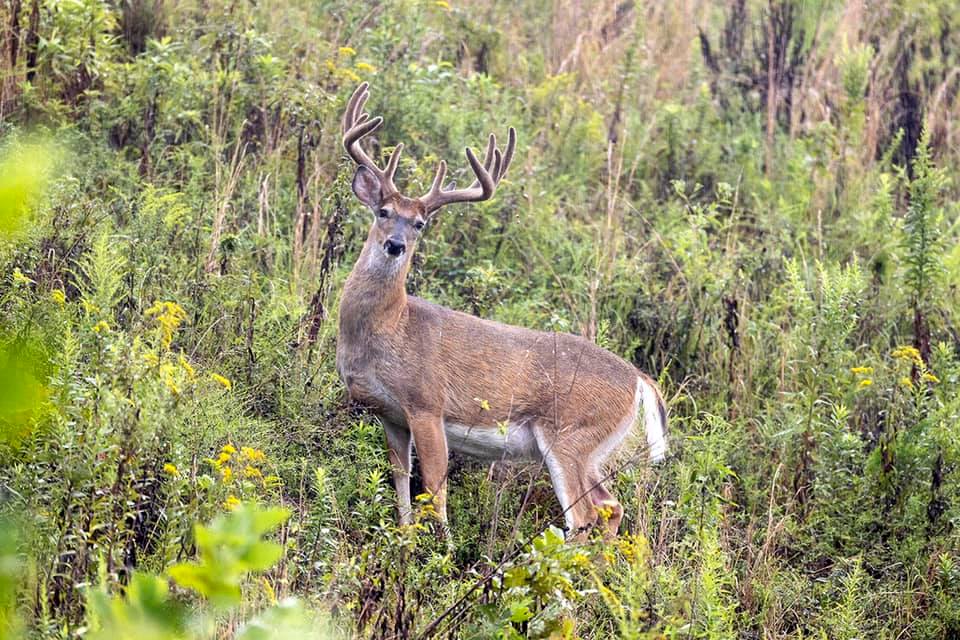 SOUTH CHARLESTON, W.Va. — It’s unclear if the Natural Resources Commission will vote on a possible reduction in the buck limit for West Virginia deer hunters at their next meeting, but the subject is clearly on the minds of those who attended Sunday’s commission meeting.

“Let’s make West Virginia’s other 51 counties a destination for whitetails like the four bow counties in southern West Virginia,” said Jarred Huggins of Terra Alta during the public portion of the meeting.

“Our own biologists have stated in previous meetings it won’t hurt or help, so why not go with the majority of the people and what they want?” said Jake McLoughlin of Ivydale, W.Va.

“I’d like to personally ask the Commission to add the buck limit reduction vote to the next Commission meeting and vote in favor. This has been on the minds of West Virginia sportsmen for the last seven years. Sportsmen have been asking for this and all surveys reflect an overwhelming majority of hunters want the buck limit reduced,” offered Ken Sanders from Shinnston, W.Va.

Several other speakers during the meetings public section also spoke in favor of lowering the buck limit from three to two. Nobody spoke against the idea.

“It’s been on the questionnaire three or four times, we’ve done in-house and contracted with an outside survey and we’ve done an e-mail campaign. We’re going on 11 years of getting phone calls and every time the majority favors lowering the limit. I would like to see this put on the agenda for the May meeting,” said Burnette during remarks by Commissioners.

But Bolyard, who is simply fulfilling the duties of the position until a permanent replacement for Steve McDaniel is named wasn’t willing to make the commitment believing he wouldn’t be the director at the next meeting and it would be unfair to make such a stand.

“The agenda for that meeting will be set in April and by whomever is the Director. I don’t feel comfortable committing to putting that on the agenda,” Bolyard told Burnette.

Beyond the buck limit a couple more items dominated the public speaking portion of Sunday’s meeting. Coyotes and coyote hunting were on the minds of many, specifically the complicated and often cumbersome regulations for coyote hunting at night.

The regulations which were changed in recent years require notification of local Natural Resources Police Officers. Speakers suggested difficulty getting hold of the local officer and those who were able to contact them found the process for both themselves and the officers too cumbersome and time consuming to be worth the effort.

Commissioner Burnette suggested creating a white paper between law enforcement and wildlife to make the process easier while also guarding against the potential for poaching. Commissioner Janet Hamric-Hodge noted she had put together the proposal on increasing the coyote harvest as she had been asked to do at the last Commission meeting.  She did so  in coordination with the late DNR Biologist Rich Rogers. She provided the resulting report to the Commission.

Commissioners also got an earful from horse riding enthusiasts who were angered they were no longer allowed to ride horses on Wildlife Management Areas in West Virginia.

“A the Beech Fork Wildlife Management Area until five years ago we could ride in there before hunting season began. Nobody every said we weren’t supposed to ride there. In a DNR report it said there are 500 or so miles of roads in the wildlife management areas, why are horses not allowed on those? I come from Beech Fork, there is no other public venue for riding in western West Virginia other than Beech Fork and East Lynn. I’d like you to consider opening the WMA’s for designated trails and roads for horse riding,” said Tom Jeffrey of Barboursville, W.Va.

Several other horse enthusiasts echoed his remarks about horses.

There were several comments to the commission about the proposed changes in the catch and release regulations, particularly the hot button topic of changing the regs on Cranberry River.

Commissioner Tom Dotson in his remarks a clarification on his position on the matter.

“I feel the Catch and Release Area should be moved. After a lot of deliberation, I think we made an informed decision that it should be moved from Tumbling Rock down to Cold Run. I am an advocate of Catch and Release, but Commissioner Chambers was correct when he said if you keep the four mile section catch and release in its present location, people that camp in the big camping areas have nowhere to catch and eat the fish they catch,” he said.

Dotson said he had visited the area with former DNR Director Steve McDaniel to survey the area and speak to anglers about the idea.

The matter is part of the final two questions on the questionnaire sportsmen will receive when they attend the March sectional meetings.