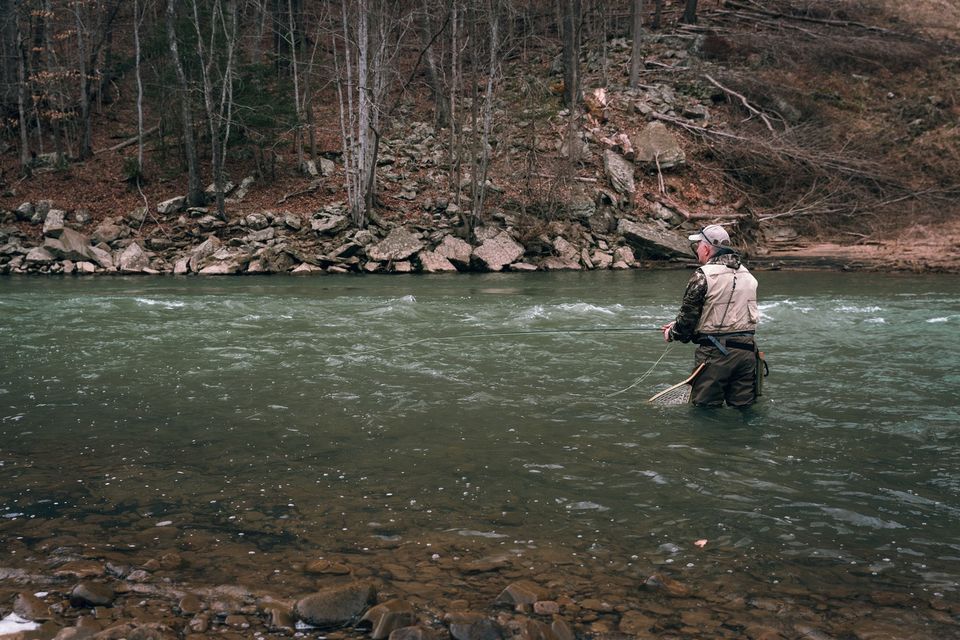 A number of streams are proposed for Catch and Release or changes to their current angling status in the 2022-23 proposals.

SOUTH CHARELSTON, W.Va. — Biologists with the Division of Natural Resources made their 2022 proposals aimed at changing fishing regulations to the Natural Resources Commission Sunday. The proposals were dominated by recommendations involving catch and release, delayed harvest, and children and Class Q designations to a large number of popular streams in the state.

For trout fishing the agency proposed catch and release areas on the following streams:

–Guyandotte River – Entire drainage upstream of railroad bridge in Mullens including all tributaries totaling 101 miles (Wyoming and Raleigh Counties). This stream and associated tributaries have a naturally reproducing rainbow trout population spawning both in the mainstem and in the tributaries.

– -Dunloup Creek – From the Route 25 Bridge (Thurmond Road) in Glen Jean downstream 7.3 miles to the confluence with the New River (Fayette County). This stream has a naturally reproducing brown trout population.

–Shavers Fork River – From the confluence of Fishing Hawk Creek downstream 6.1-miles to the confluence of Rich Bottom Run near Weese (Randolph County). This section has water capable of sustaining trout year round.

–Elhorn Creek — From the mouth of Elkhorn Creek upstream to include the entire drainage area for a total of 171 stream miles (McDowell County). This stream has naturally reproducing rainbow and brown trout populations.

Assistant Chief for Fisheries Mark Scott said the Elkhorn Creek proposal came at the request of the McDowell County Commission.

“We do not stock at all there, it’s a product of cold mine water and has become a trophy destination for trout. McDowell County would like us to consider catch and release on the stream,” Scott said.

Currently the only streams in West Virginia designated as “delayed harvest” are Clear Fork and Middle Wheeling Creek. The agency proposed to change the Delayed Harvest Trout Fishing Regulation to be Catch-and-Release regulations from November 1 to May 15 and under General Regulations from May 16 – October 31. This would apply to Clear Fork and Middle Wheeling Creek areas and all Delayed Harvest areas henceforth.

–Paint Creek – From Ash Branch upstream 12.5 miles to the mouth of Milburn Creek (Fayette and Kanawha Counties). This will replace the current year-round catch-and-release section and will include an additional 6 miles of stocked waters.

–Shavers Fork River – The 5.5-mile section extending from the mouth of Whitmeadow Run downstream to the mouth of McGee Run (Randolph County). This replaces the current year-round catch-and-release section.

The agency proposes to remove Catch-and Release regulations from the 1.2-mile section of Cranberry River from Woodbine Recreation area downstream to Camp Splinter at Jakeman Run (Nicholas County). The section will return to General Regulations.

“This is to replace the pond which was taken out, but there’s also been a lot of habitat work done there. It’s a place where kids can easily fish, and then if they get tired, there are swing sets and a playground nearby,” said Fish Biologist Jim Hedrick. “There are also a number of places where it’s easy to access even in a wheelchair. We think this would be a real win as a children’s Class Q fishing area,”

“Currently the lake is under a 52 inch minimum size limit. They move upstream to spawn and they may congregate in those stream. We really don’t have a good, defined boundary and by adding the tributaries we should be able to protect those trophy size fish as they move up in the spring time,” said DNR Biologist Nate Taylor.

There was also a recommendation with regard to the blue catfish. The agency recommended the establishment of a special regulation for Blue Catfish on the Ohio and Kanawha Rivers with a 25-inch minimum size limit and a daily creel limit of four fish, of which only one may exceed 35 inches. The possession limit will be 8, only two of which may exceed 35 inches. The river reaches affected are as follows: Kanawha River – Mouth of Kanawha River extending upstream to the confluence of the New and Gauley Rivers and the entire Ohio River including all West Virginia tributaries within the reciprocal Agreement boundaries.

All of those proposals from the Wildlife Section of DNR will be up for comment by the public at the Sportsman’s Sectional Meetings in March. Sportsmen will also find two questions on the measure requested by members of the Commission.

One is a proposal to shift the boundaries of the current Cranberry River catch-and-release trout fishing area downstream approximately two miles beginning at Tumbling Rock Run and extending downstream 3.9 miles to Cold Run.

The second question the Commission seeks input from sportsmen on will be a proposal to remove the Catch and Release regulation on the 4.3 mile section of the Cranberry River from the junction of the North and South forks downstream to the low-water bridge at Dogway Fork and replace it with a two-fish daily creek limit and two-fish daily possession limit per angler within the section. All trout must be consumed while camping within the backcountry area and no trout can be removed from the area.