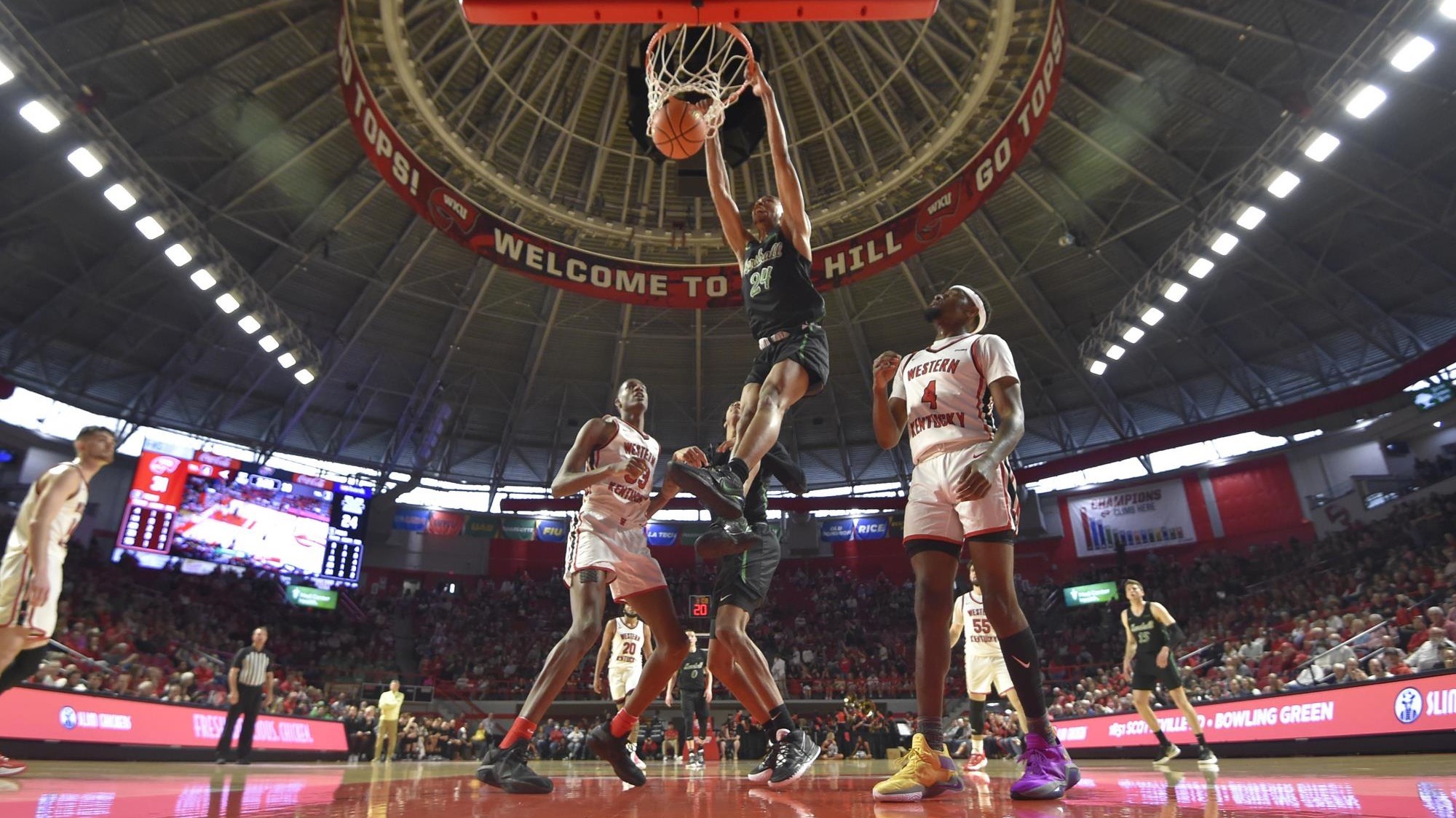 Western Kentucky won the back half of the home-and-home Conference USA series against rival Marshall on Saturday afternoon, 78-69. The victory came in front of 6,098 fans at Diddle Arena and allowed the Hilltoppers to improve to 19-12 overall and 11-7 in Conference USA play.

The Hilltoppers (19-12, 11-7 Conference USA) led by 11 at halftime and went on to beat the Herd for the second time in four days after claiming an 82-68 win Wednesday in Huntington. The win is WKU’s ninth in its last 10 games.

Marshall (11-19, 4-14 C-USA) now heads to Frisco, Texas for the C-USA Tournament. The Thundering Herd has a play-in game Tuesday againt Florida International. The tournament runs through Saturday. Western Kentucky, No. 2 in the East Division, has a bye into Thursday against an opponent to be determined.

Jarius Hamilton and Dayvion McKnight led Western Kentucky with 16 points each. Jamarion Sharp, the Hilltoppers’ 7-foot-5 center, added 12 points and 12 rebounds to go with seven blocks. Like Frampton, a Poca native, scored 12 on four 3s in the victory, while Josh Anderson totaled 11.

“The biggest key was playing our game,” Anderson said. ”I feel like our mentality was just by any means, we’ve got to go out and get the ‘W’ so we can get that bye next week. It’s pretty big with our rotation only playing six or seven guys for most of the minutes, so having that bye for the first game is big.”

Marko Sarenac came off the bench to lead the Herd with 18 points on six 3-pointers. Andrew Taylor and Taevion Kinsey each totaled 16 points.

The Herd pulled within 46-44 with 14:02 to go, but the Hilltoppers answered with a 9-0 burst to stretch it back to 55-44. Marshall never truly threatened again.

Western Kentucky coach Rick Stansbury is now 9-4 against Marshall. The Hilltoppers have won seven in a row against the Herd.

“Overall, great team effort. I’m proud of those guys,” Stansbury said. “As you know, 10 games ago, none of you guys, anybody would’ve given them a chance to do what they’ve done. And they deserve all the credit. Not a lot of teams and not a lot of players could’ve gotten back up off the mat after some tough losses.”

Western Kentucky had a 27-7 edge in fastbreak points. It also enjoyed a 38-26 edge in points in the paint.

Camron Justice, who last season served as a graduate assistant in athletics at Western Kentucky and then sought and gained the chance to play this season, led the charge with 27 points on Thursday. He scored nine Saturday.

Earlier Wednesday, Sharp was named as a semifinalist for the 2022 Naismith Men’s Defensive Player of the Year. The Atlanta Tipoff Club made the announcement. Sharp is one of 10 players to make the list and is one of three from outside the Power Five. The award is given annually to the nation’s top men’s defensive player.