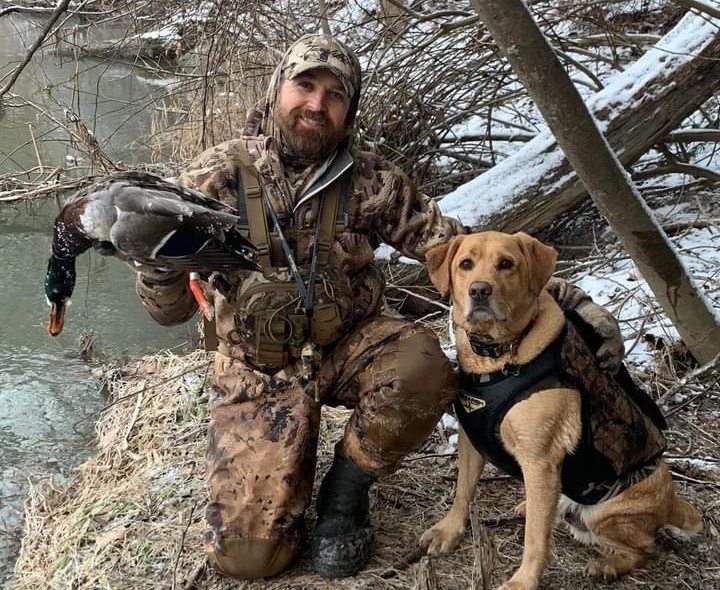 Mike Ball of Alum Creek, W.Va. with his dog Remington and the duck which was at least 15 years old killed in January in Lincoln County.

ALUM CREEK, W.Va. — Mike Ball of Alum Creek admitted he’s “eaten up” with waterfowl hunting. Since West Virginia lies between the two major flyways, the number of true waterfowl hunters in the state doesn’t quite rival the numbers in other states like Maryland, Virginia, Arkansas and Louisiana. But hunters in those states would be envious of Ball’s luck in late January while hunting at the Upper Mud River Reservoir in Lincoln County.

While hunting with a buddy, he was able to shoot a drake mallard with a leg band.

“I hadn’t really even taken the time to take a real close look at the band I was so excited,” Ball said in a recent conversation on West Virginia Outdoors.

Metal bands are often attached to the legs of ducks or geese by biologists to track movements and life events of the waterfowl. Hunters play a key role in the conservation effort by reporting the bands when and where they kill a banded bird. It makes a banded bird something of a trophy to waterfowl hunters.

When Mike finally got a close look at the band on his mallard’s foot, it was an even bigger trophy that expected.

“The band was so old, the last two numbers had been rubbed off,” he explained.

With some instruction from a YouTube video, Ball was able to use muriatic acid to lift and identity the missing numbers and punched the information into the U.S.G.S. website to report his duck.

“The information kept popping up that it was an extremely old band and to make sure I had read the numbers right. It was as if they didn’t believe me,” he explained.

But, the numbers were correct and Ball finally learned why there was so much skepticism.

“The information came back that it was a drake mallard hatched in 2007 or earlier and banded in 2008 in Mitchell Bay in Ontario, Canada,” he said.

Federal wildlife officials took a great interest in Ball’s mallard which was at least 15 years old and kept asking for more pictures and more information. Ball said he learned through conversations with officials at the U.S.G.S. there were occasionally old birds located. The longest time span on record was a mallard 27 years and 7 months old.

The unique traits of the Ball’s mallard didn’t stop there. He learned from federal officials his bird had originally worn two bands.

“When they banded it was double-banded and somewhere along the line it lost the other band.” he explained.

Although it was certainly a unique band, it wasn’t Ball’s first. He killed a banded Canada goose in Lewis County last year. Ball laughed that one wasn’t nearly as exciting. The goose had been banded a few months before he killed it and only a few miles from the location.