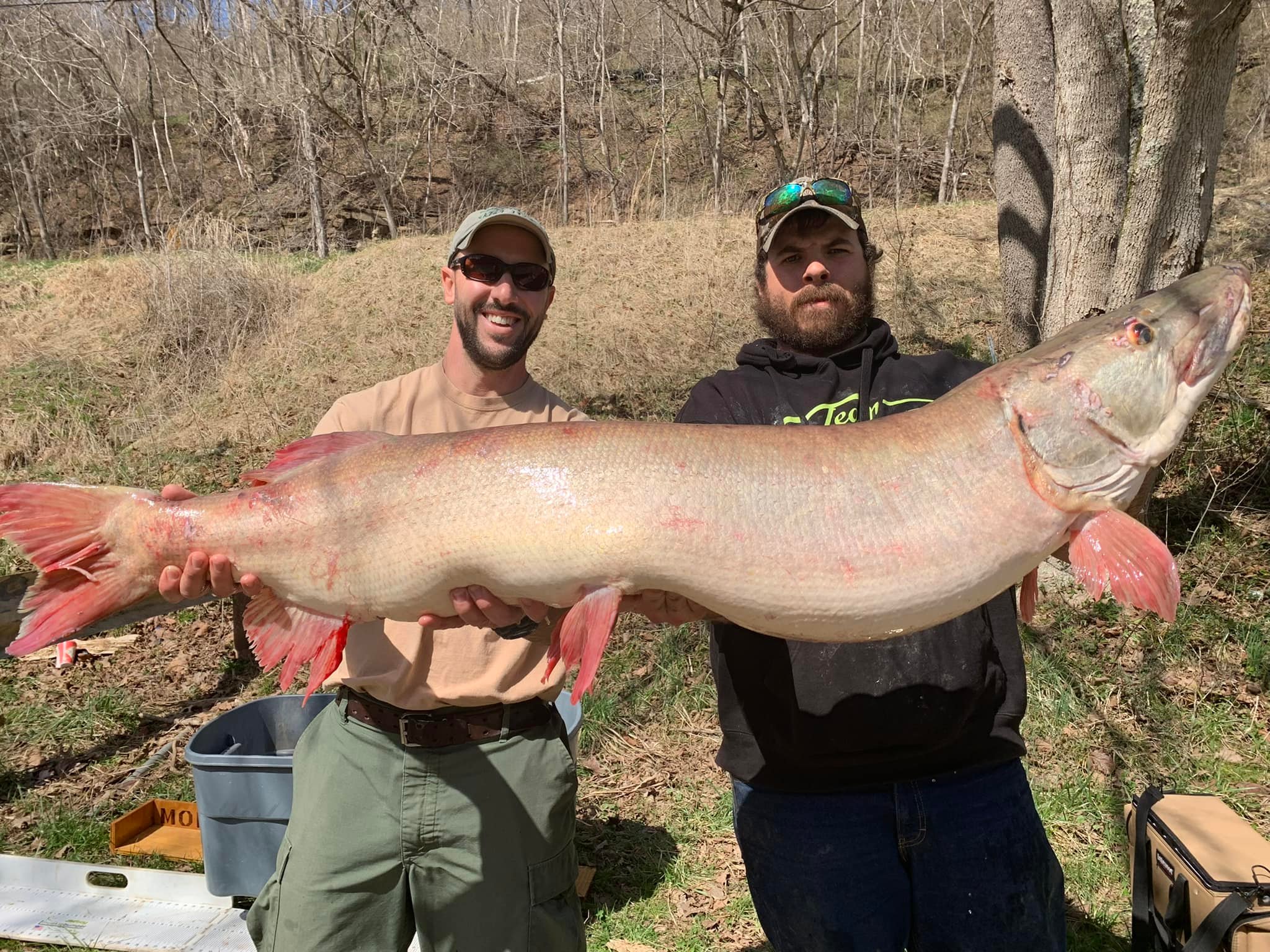 Lucas King (r) of Burnsville with DNR District Fisheries Biologist Aaron Yeager pose with the monster musky which broke the state record for both weight and length.

BURNSVILLE, W.Va. — Last weekend, Lucas King of Burnsville had a little time to kill before he had to run to the grocery store. King, who works for the West Virginia Division of Highways, was enjoying the Saturday off after manning the snowplow the previous weekend. He decided to spend some time wetting a line in the tailwaters of the Burnsville Dam in Braxton County before heading out for his errand.

“It was a nice morning, low 40’s and a little bit of clouds and sun, but no wind. I thought I’d go fishing and kill a few hour before I ran to the grocery store,” he explained in an interview for West Virginia Outdoors.

King was fishing from the bank and made a couple of rounds walking a stretch of water between two riffles on the Little Kanawha River between the Burnsville Dam and the town of Burnsville.


After two passes with no luck, King concentrated on a very specific spot in the pool where he’s gotten dozens of musky bites in the past. He knew of a submerged rock shelf on the opposite bank where fish like to hang out and ambush prey. The drop goes from two feet to around 12 feet deep.

Using a a six inch jerk bait, King explained he felt resistance on about the third twitch so he set the hook. The head of the monster came up out of the water–and immediately headed straight at him.

“I knew it was a good one when she came up out of there head shaking and mouth open. She started heading toward me on the bank,” he explained.

King had experience in dealing with musky so he was geared with the right equipment and knew how to properly apply the right level of pressure to turn her back and get her into shallow water. In a short period of time he had her at his net along the bank, but with the bank so steep he decided to steer her further upstream. It took several attempts, but he finally got her into the net and into an area where there was some shoreline to stand and work.

Fishing alone, King had seen a friend not far away fishing with his children. He gave him a shout to come take some pictures. With pictures secure, the two discussed the monster musky probably should be measured with the possibility it could be a state record fish. Neither had a tape measure, so King called his fiancé to ask her to bring his bump board to measure the monster fish.

Now realizing he potentially had a state record fish sitting in a net in shallow water, King started racking his brain. He made several phone calls and finally found a connection who was able to get in touch with DNR District Fisheries Biologist Aaron Yeager. Yeager lived in Belington and the trip to Burnsville would take at least an hour. King knew his trip to the grocery store was probably going to be indefinitely delayed. He also had concern for the fish’s health, but for the moment she was fine just resting comfortably in the net and content to stay still and upright.

Yeager arrived with his measuring equipment, but noted when he got there the certification on his scales had expired only days earlier so for an official weight they’d have to find another set of scales. Yeager filled an aerated tank in his truck to safely haul the fish, which had already broken the record for length at 55.0625 inches. That’s a full inch greater than the standing record. The pair made a ride over to Gassaway to the Southern States where they found a set of certified scales. The big girl tipped those at exactly 51 pounds–besting the old weight record of 49.75 caught at Burnsville by Anna Marsh in the 1990’s.

Luke King of Burnsville released his record fish back into the Little Kanawha River after it was certified as the new record for weight and length pic.twitter.com/yu0v504caK

With the measurements secure and the record certified, the big fish was released back into the water at the same location where it was caught.

“I was just out there to have a little fun. I never imagined I’d catch something like that,” he laughed.