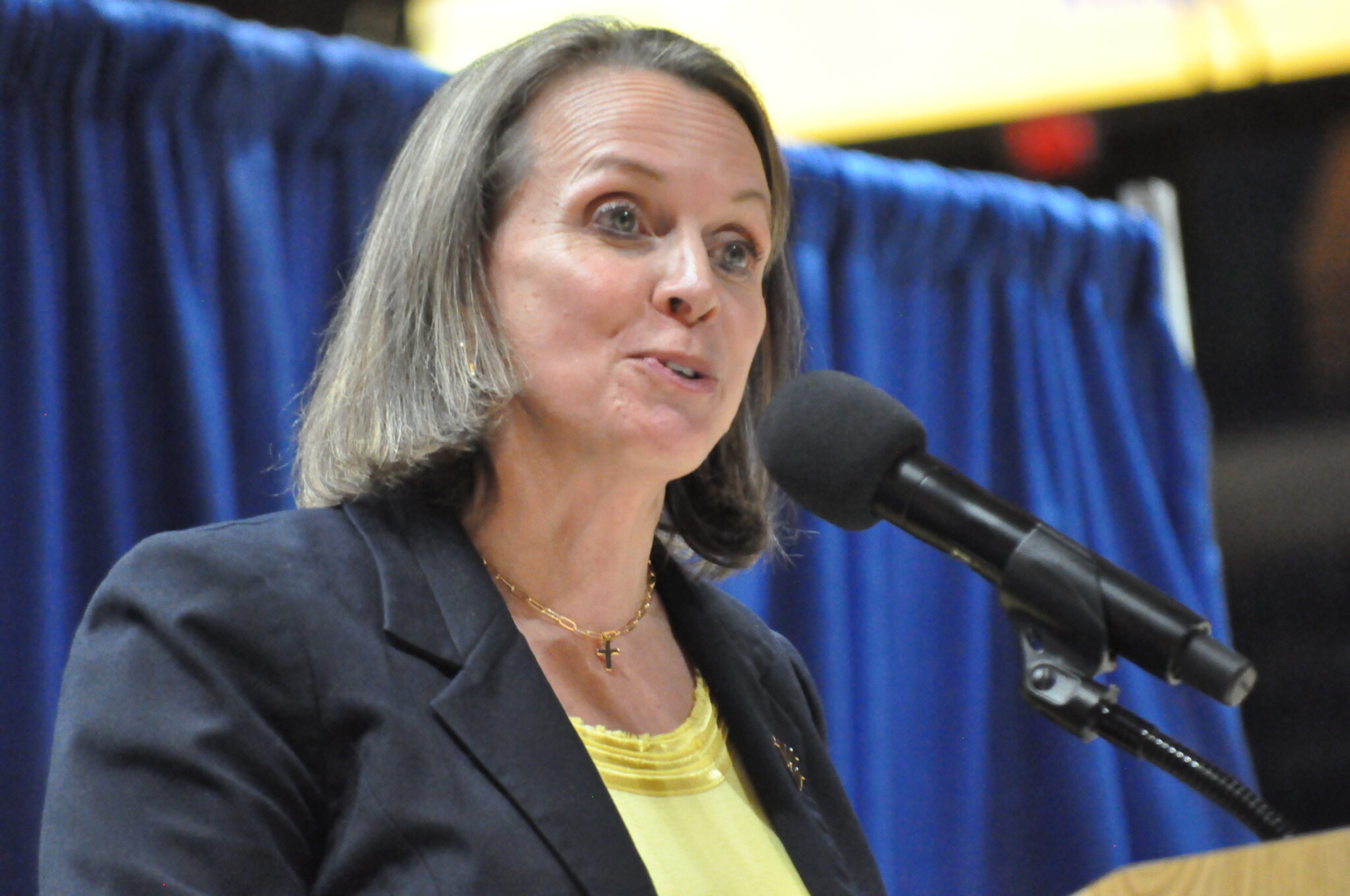 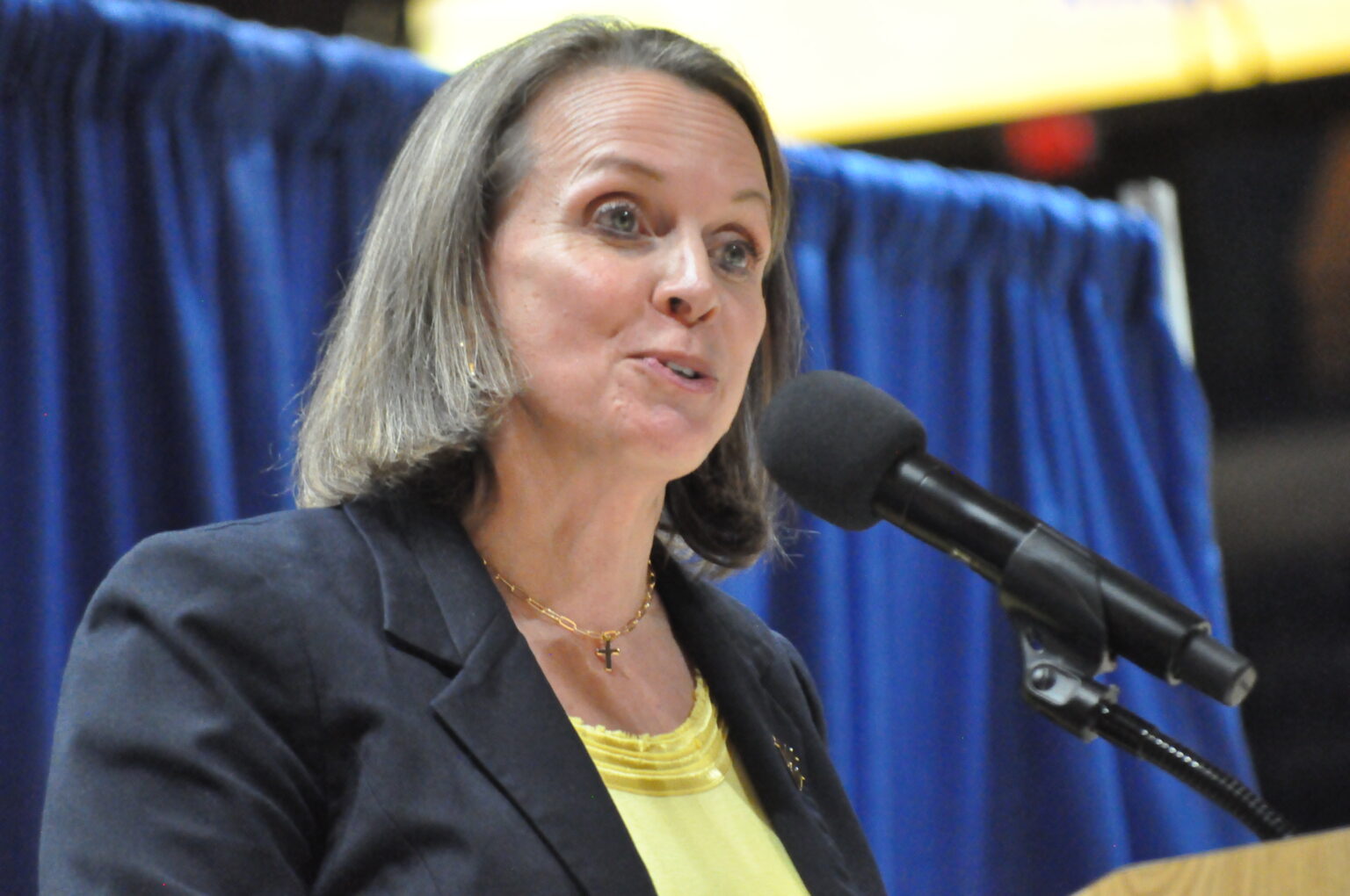 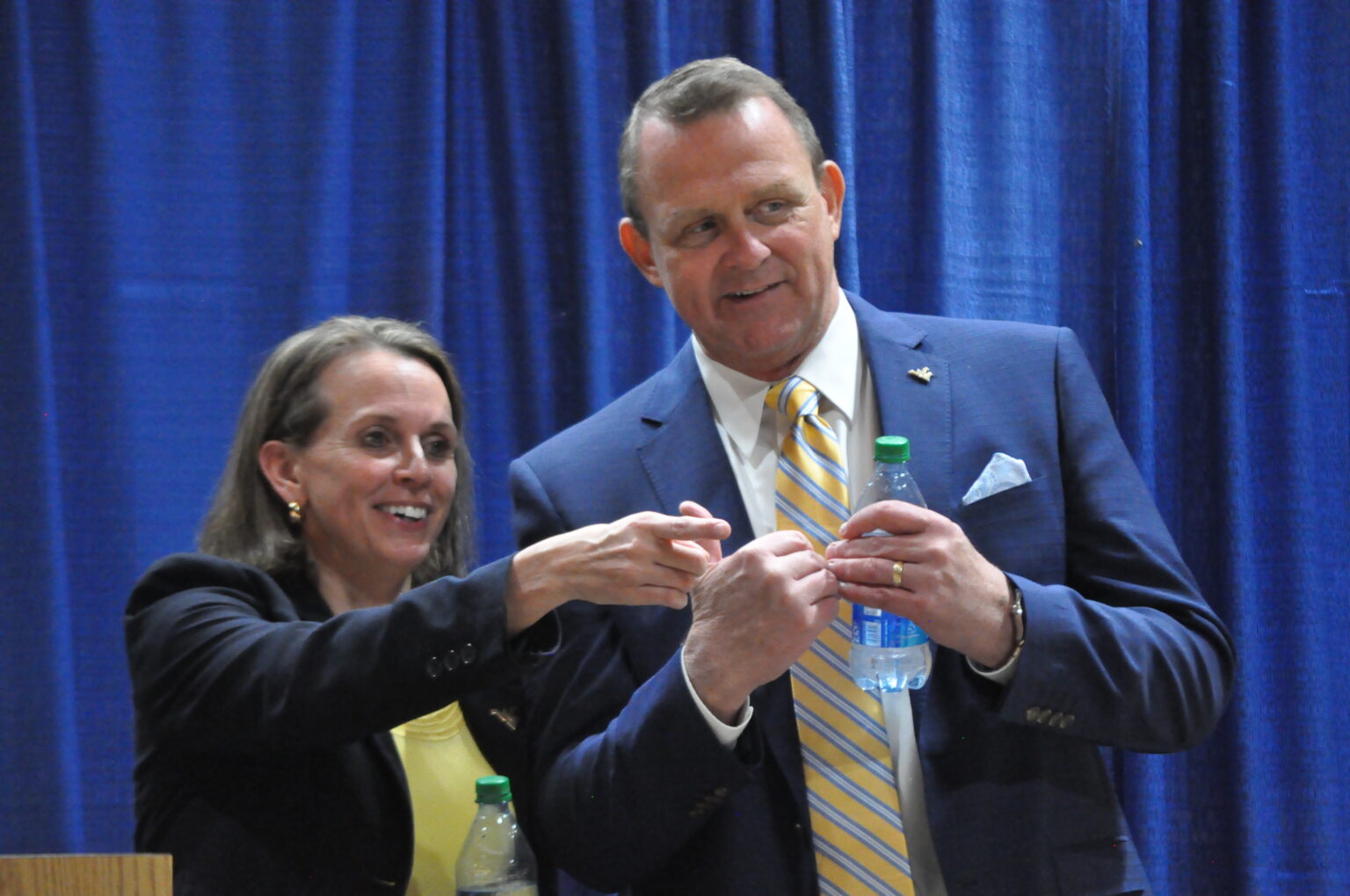 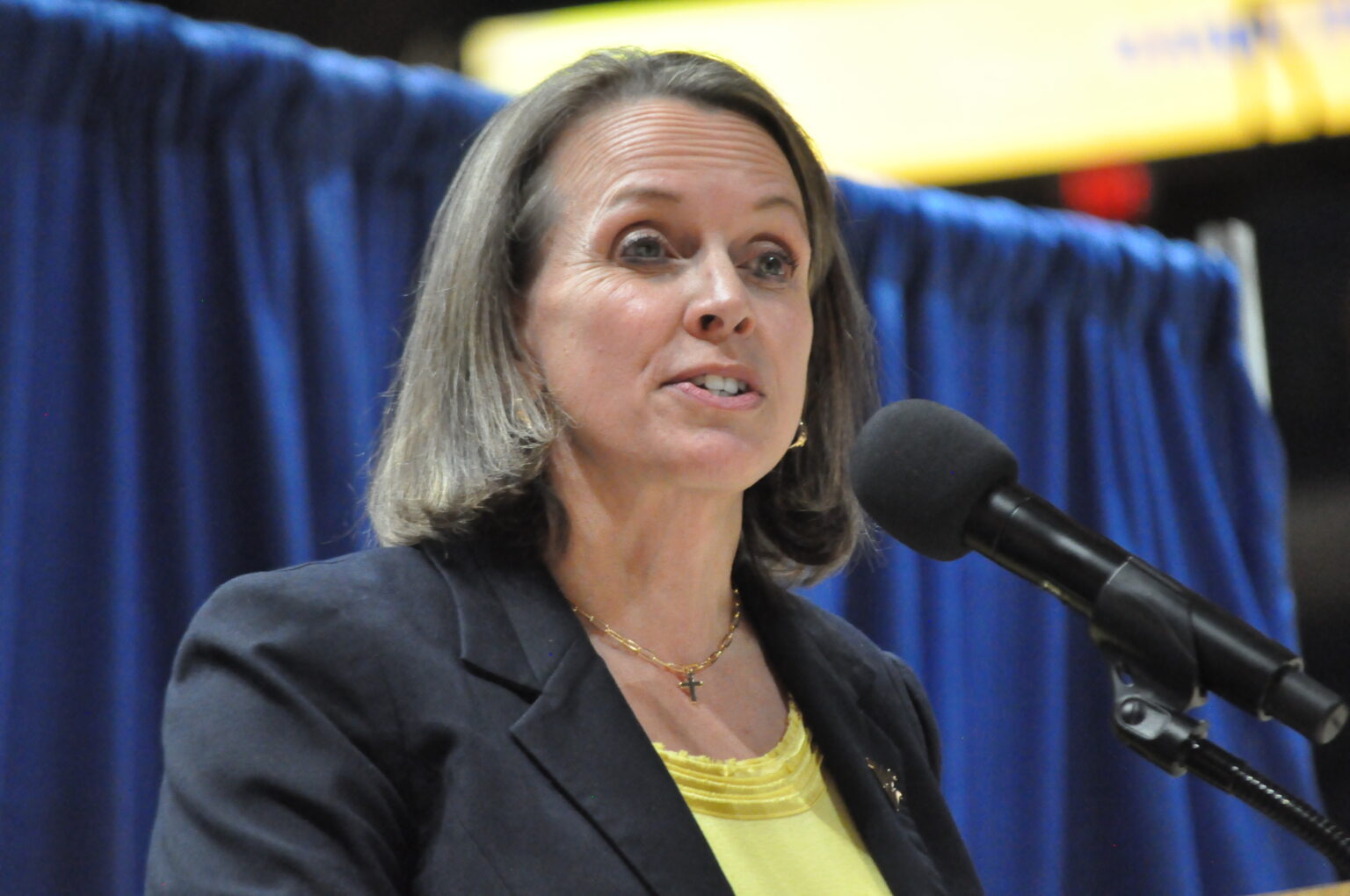 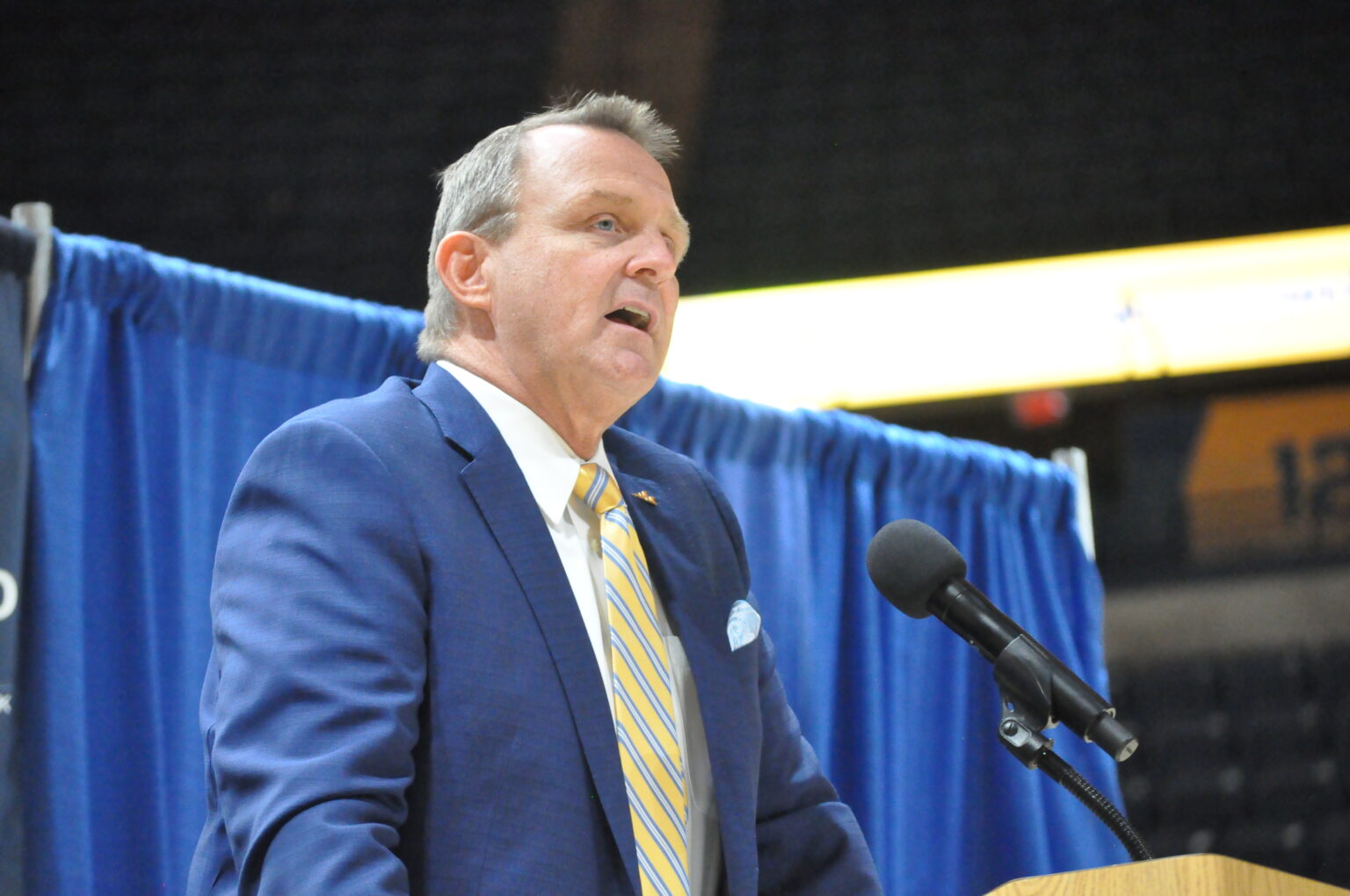 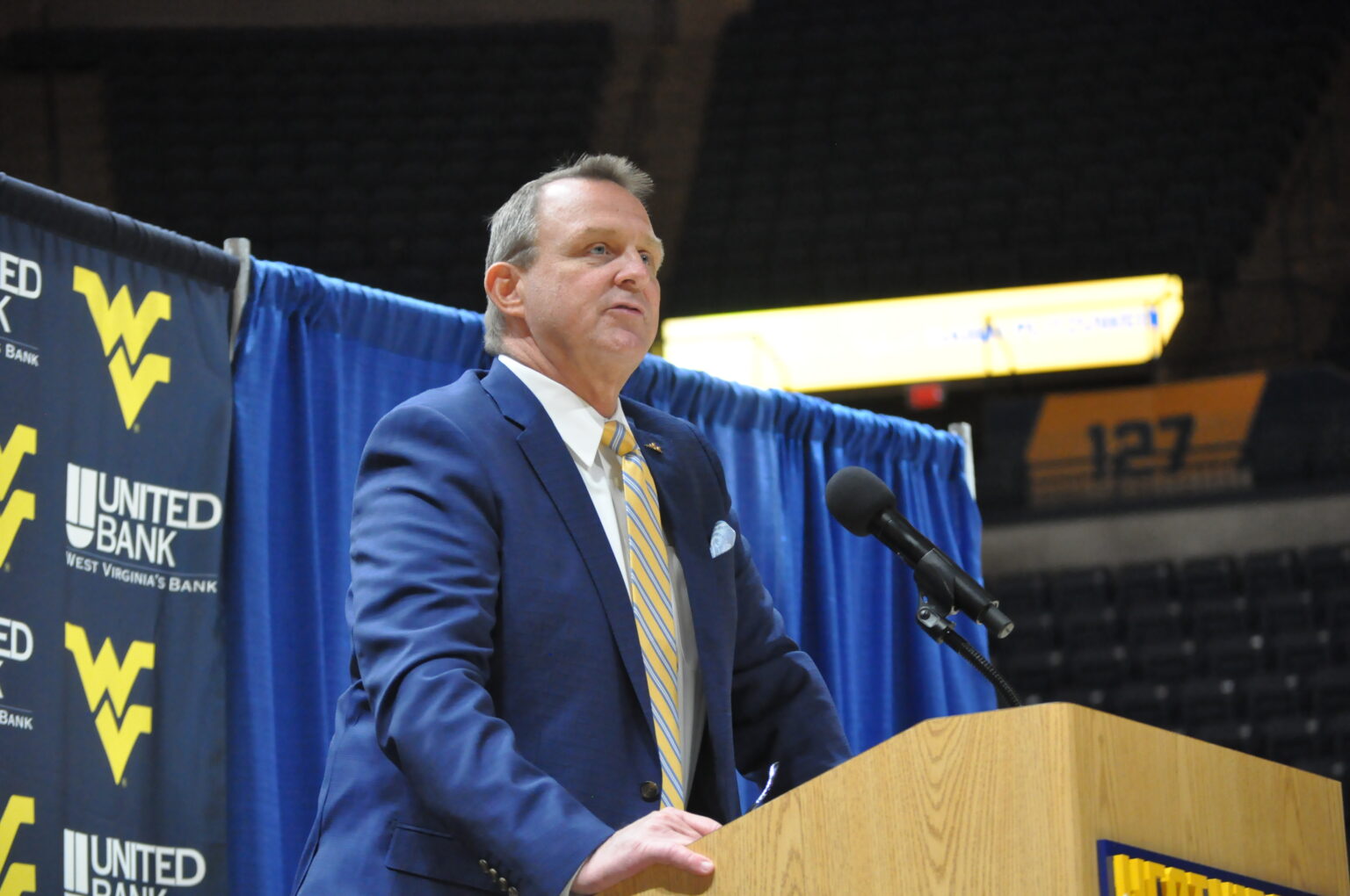 MORGANTOWN, W.Va. — As Dawn Plitzuweit took to the stage Tuesday for her introductory press conference as the sixth head coach in the history of West Virginia women’s basketball, she did so with no shortage of excitement in regards to the present and what lies ahead.

Fresh off leading the University of South Dakota to a Sweet 16 appearance, Plitzuweit was introduced by Director of Athletics Shane Lyons as the replacement for Mike Carey, who retired last month.

“I’ve had a chance to coach for quite a few years and certainly during that time, you understand the landscape of women’s basketball,” Plitzuweit said. “West Virginia women’s basketball is a national brand and a brand of basketball that has a great legacy and history behind it. To have an opportunity to be here and be the next head women’s basketball coach is a dream and really exciting.”

Plitzuweit was hired last Thursday after leading the Coyotes to an unprecedented run of success that featured the program qualifying for four consecutive NCAA Tournaments to end her tenure, culminating with a recent run to the Sweet 16 that featured postseason victories against Ole Miss and Baylor.

In six seasons at South Dakota, Plitzuweit’s teams never won fewer than 19 games — that coming during a shortened 25-game 2020-2021 campaign. She compiled a 158-36 record at USD, including 83-10 in Summit League play. Plitzuweit became the fastest coach in Summit League history to reach 100 wins as she needed only 124 games to do so.

“We looked for somebody with high character, previous head coaching experience, a proven winner with NCAA Tournament experience, a program builder, a leader of young women who will provide our student athletes with a great experience overall with an emphasis on academic and graduation success,” Lyons said. “As we continued through this process, a name that kept coming to the top was Dawn Plitzuweit.”

Before seeking the approval of President Gordon Gee, Lyons, Executive Senior Associate Athletics Director for External Affairs Matt Wells and Chief Operating Officer/Deputy Athletics Director Keli Zinn settled on Plituzweit as the top choice to take over for Carey, who left as the all-time winningest coach at West Virginia with 447 victories over 21 seasons.

“She has a national reputation as a great tactician, program builder and leader,” Lyons said, “and those were just a few of the things that kept popping out when we talked to Dawn Plitzuweit.”

Before the successful tenure at South Dakota, Plitzuweit was 71-54 during her first Division I head coaching stop at Northern Kentucky. That came after five seasons as an assistant at Michigan, a job Plitzuweit landed after leading Division II Grand Valley State to a 117-39 record and a 2006 National Championship over six seasons.

Along the way, her teams have thrived playing what Plituzweit described as a style of “positionless basketball”, something she hopes to continue in Morgantown.

“From a recruiting standpoint, a lot of players want to be able to play that type of style and system,” Plitzuweit said. “It’s a strength of our staff to develop players and continue to help them grow their games and stretch their games — whether that’s stretch it on the perimeter, handle it better or push it up the court and different types of things along those lines.

“The great part about it is we have players that we’ve coached over the course of time that have kind of modified that system, so it’s going to be fun to see how they do that.”

In the ever-changing world of college athletics, keeping rosters intact is more difficult than ever for coaching staffs. With that in mind, Plitzuweit spoke of striving for a sense of togetherness within the locker room, something the new WVU head coach believes translates to success on and off the court.

“Toughness is something that helps us build who we are, and then there’s the togetherness piece,” Plitzuweit said. “For us, the chemistry and time that we get to spend together on and off the court is great for us, because we’re building that unity together. As we look at the landscape, we don’t know exactly where it’s going to go, so we’re going to focus on who we are and how we continue to grow together.”

Horn worked alongside Plitzuweit for all six seasons at South Dakota, while Jeschke was with her for five of those seasons after he was head coach at Oklahoma Wesleyan, a NAIA program. Braker, an accomplished player at Notre Dame from 2010-2014, was at South Dakota for one season after recent stints as an assistant at Lehigh and Oakland.

“At the university of South Dakota, we were able to build a very special program with great coaches,” Plitzuweit said. “Our coaches worked tirelessly, but I don’t know if there was a coaching staff in America that had more fun than we did while we were doing it.

“We’re going to play music in practice and the coaches might be the ones dancing every once a while. You may have to help us a little bit with that, because we have some work to do. Our staff has great synergy together and I’m very thankful for them to be here today.”

Jeschke believes West Virginia faithful will grow to enjoy Plitzuweit and the defining characteristics of her teams.

(Sights and sounds from the introduction ceremony)