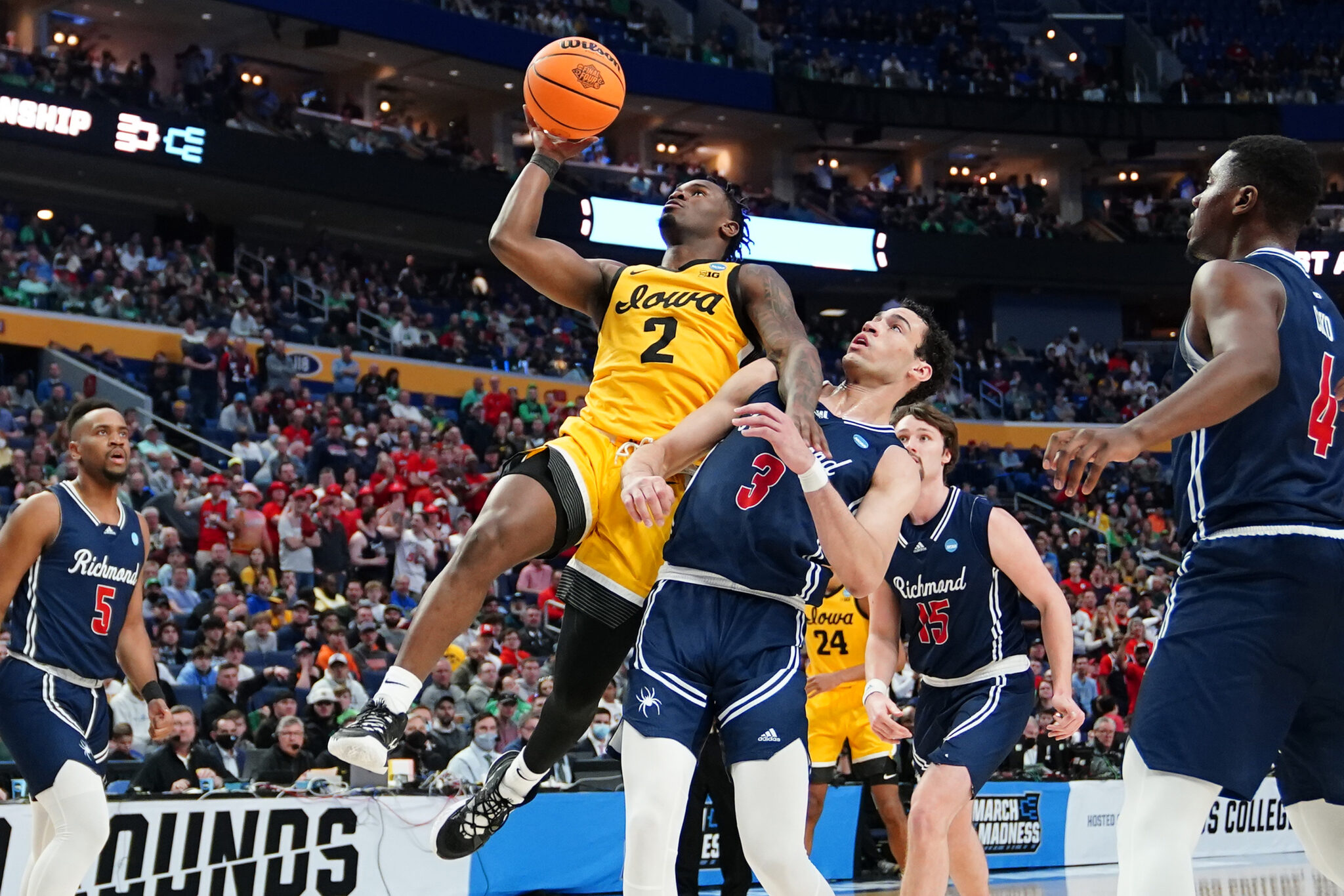 Iowa guard Joe Toussaint (2) shoots the ball against Richmond Spiders forward Tyler Burton (3) in the second half during the first round of the 2022 NCAA Tournament at KeyBank Center. Mandatory Credit: Gregory Fisher-USA TODAY Sports

MORGANTOWN, W.Va. — West Virginia got its second offseason addition from the NCAA Transfer Portal on Monday when Iowa guard Joe Toussaint announced his commitment to the Mountaineers.

Toussaint, who visited West Virginia over the weekend, spent each of the last three seasons with the Hawkeyes. At Iowa, the point guard finished with averages of 4.8 points, 2.8 assists and 1.1 steals.

The 6-foot, 190-pound Toussaint has two seasons of eligibility remaining and was a key factor — primarily as a distributor — for one of college basketball’s top offenses in the 2021-2022 season. Iowa finished fifth in scoring at 83.2 points per game and first in assist-to-turnover ratio at 1.74 across all of college basketball.

As a sophomore, Toussaint was a reserve for all 31 games and averaged 3.7 points over 11.3 minutes.

After shooting an average of 5.8 times per game as a freshman, Toussaint’s field-goal attempts reduced to 3.2 and 3.8 on average each of the next two seasons. Toussaint never tried more than eight shots or two triples in any game last season.

For his Iowa career, Toussaint averaged 1.6 turnovers and made better than 76 percent of his free-throw attempts.

Toussaint could be in line for a lot of action at point guard. Although guard Kedrian Johnson announced earlier this offseason he would return for a second senior season with the Mountaineers, WVU head coach Bob Huggins said several times last season Johnson isn’t a natural point guard as he was primarily asked to score in his days as a junior college player before coming to Morgantown.

The Mountaineers’ top four scorers from last season are no longer with the program, three of which were guards. Taz Sherman and Malik Curry no longer have college eligibility, while fellow guard Sean McNeil opted to transfer.

Toussaint joins Erik Stevenson as the Mountaineers’ offseason additions through the transfer portal thus far. Stevenson, a 6-4 guard, most recently played at South Carolina and was at Wichita State and Washington before that.