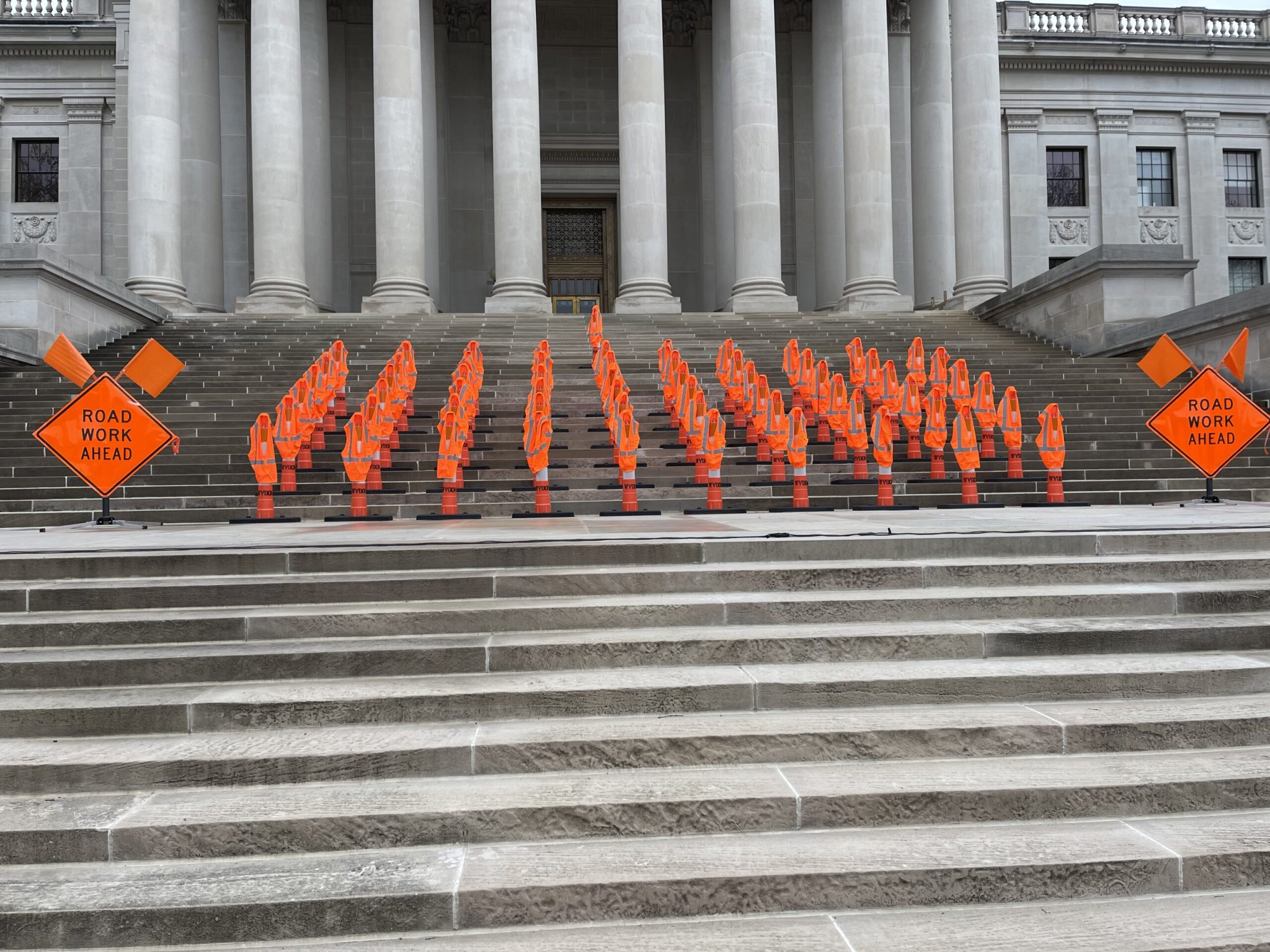 Sixty-one empty orange vests hang on the steps of the WV Capitol Building in tribute to highway workers killed on the job through the years.

The vests were a stark reminder of the cost when highway construction zone safety laws are forgotten. Each of the vests represented a highway worker killed on the job in West Virginia through the years. Those workers names are on a memorial at a Rest Stop on I-77, something Wriston has no interest in expanding.

“It’s about not adding one more name to that memorial. We have to commit to our goal of partnering with anyone and everyone and meeting that goal of zero lives lost on our highways, particularly in our work zones,” he said.

West Virginia’s statistics are better than most states, but are still higher than anyone wants to see. From 2017 to 2021 West Virginia reported 21 fatal crashes in work zones–a figure representing just over one percent of the state’s fatality rate on the highways. There were 802 crashes in work zones with injuries and 1,266 crashes with property damage. Nationally 850 work zone fatalities occur annually and 85 percent of the work zone accident deaths are drivers or passengers in the vehicle.

The most likely days for work zone crashes are Tuesday, Wednesday, and Thursday and the most common is a rear end collision.

“What that says to me is somebody needed to be paying attention or they wouldn’t have hit the car in front of them,” said Cindy Cramer, director of the DOT Traffic Engineering Division.

The Public Service Commission and law enforcement are working in conjunction with the Department of Transportation to continue to increase enforcement around work zones. There will be a zero tolerance policy.

“The days of talking your way out of a ticket in a work zone are over,” said Wriston. “They’re serious and this is part of the commitment to getting this done.”

State Police Lt. Chris Zerkle explained where you normally see one officer sitting in a work zone with the blue lights flashing, chance are they don’t take very much action, but soon there will be additional officers in the work zones of West Virginia placed there for the specific purpose of writing tickets and enforcing the work zone traffic regulations. Any fines for work zone traffic violations are automatically double.

“We would much rather issue a traffic citation for speeding than deliver a death message to a family member,” said Zerkle. And if you want to contest a ticket, you can hire traffic lawyers to help clear your charges.

The Department of Transportation recently unveiled more than 800 paving projects across the state all of those along with a myriad of highway construction projects already underway mean there will be many miles of orange cones in the state this spring and summer. The agency asks motorists to cooperate and slow down.

“If you go through a work zone, slow down and you’ll go smoothly and smooth is fast. The investment you make of your time can literally save people’s lives,” said Wriston.