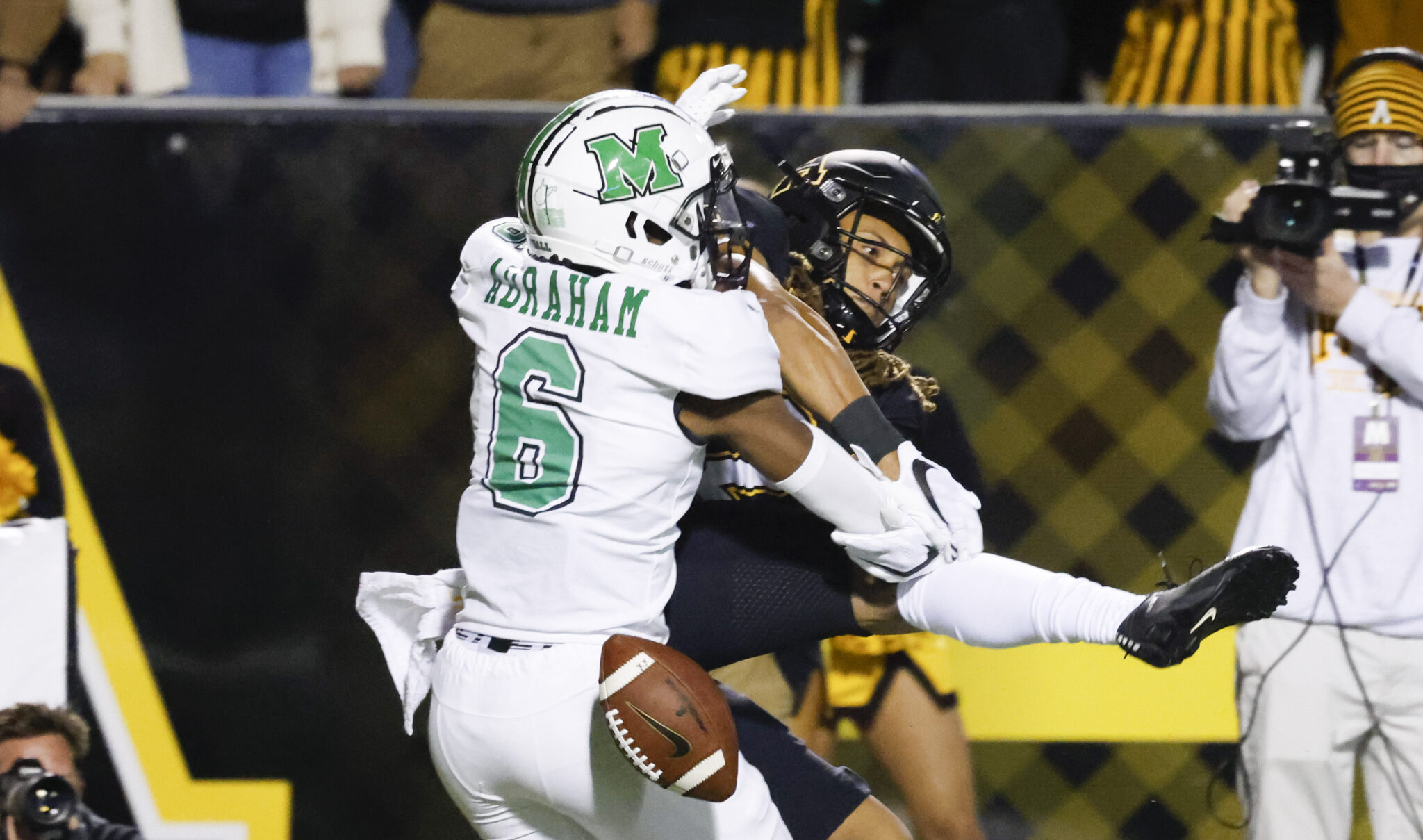 HUNTINGTON, W.Va. — Coming into spring drills, developing defensive depth was one of the top priorities for Marshall.

Second year MU head coach Charles Huff believes his team is coming along in that regard and offered praise for the performance of experienced Herd defenders.

“Some guys are playing extremely consistent,” Huff said. “Right now, the defense is probably a little bit ahead of the offense because we have some veteran guys on defense.”

Ten returnees that played in at least 12 games in 2021 are back on defense. The group includes several players whose time on the field increased as the season progressed, such as defensive ends Owen Porter and Esaias Carpenter. The mix of experience, along with several additions through the transfer portal, have helped the defense shine in spring ball.

“When you’re watching the O-line, you’re saying that we’re struggling, but we’ll be one of the better D-lines in the conference, so this is something that’s good for our guys,” Huff said. “Day in and day out they are going to be able to go against some of the best.”

Porter and Koby Cumberlander are the best statistical returners on the defensive line. Cumberland had 41 tackles, 4.5 sacks and two blocked kicks last fall, while Porter, a former standout at nearby Spring Valley High School, had 44 tackles and four sacks. Porter was especially effective in Marshall’s loss to Louisiana in the New Orleans Bowl with six tackles, including four stops behind the line of scrimmage.

Experience on the D-line is also provided by Sam Burton, Elijah Alston, TyQaze Leggs, Immanuel Bush and a pair of Power 5 Conference transfers — Isaiah Gibson from Kentucky and Anthony Watts from Purdue.

Marshall’s top tacklers in 2021 were the linebackers — and most are back. Abraham Beauplan and Eli Neal combined for 207 tackles and eight sacks last season. They also had a combined 18 tackles for loss and each forced a fumble.

The pair is joined by another playmaking linebacker in Charlie Gray, who had 55 tackles in 2021, along with two sacks and 7.5 tackles for loss.

Defensive Coordinator Lance Guidry is also fortunate that key cover men such as Micah Abraham and Steven Gilmore, both with fathers who were NFL stalwarts, are back. So, too, are defensive backs that have displayed promise in EJ Jackson, Kerion Martin and Joshua Bowers.  Jackson, a safety, had a strong 2021 season with 56 tackles and a forced fumble.

Experienced transfers Isaiah Norman from Austin Peay and Andre Sam from McNeese State are looking to work their way into the rotation as well.

The third level of defense hopes to overcome the loss of leaders Nazeeh Johnson, Brandon Drayton and Cory McCoy. The trio combined for 205 tackles last season, eight tackles for loss and four interceptions — two each for McCoy and Johnson. McCoy also had a pair of fumble recoveries.

Marshall wraps up spring football with the Green-White Spring Game on April 23rd at 3 p.m. in the Chris Cline Athletic Center.