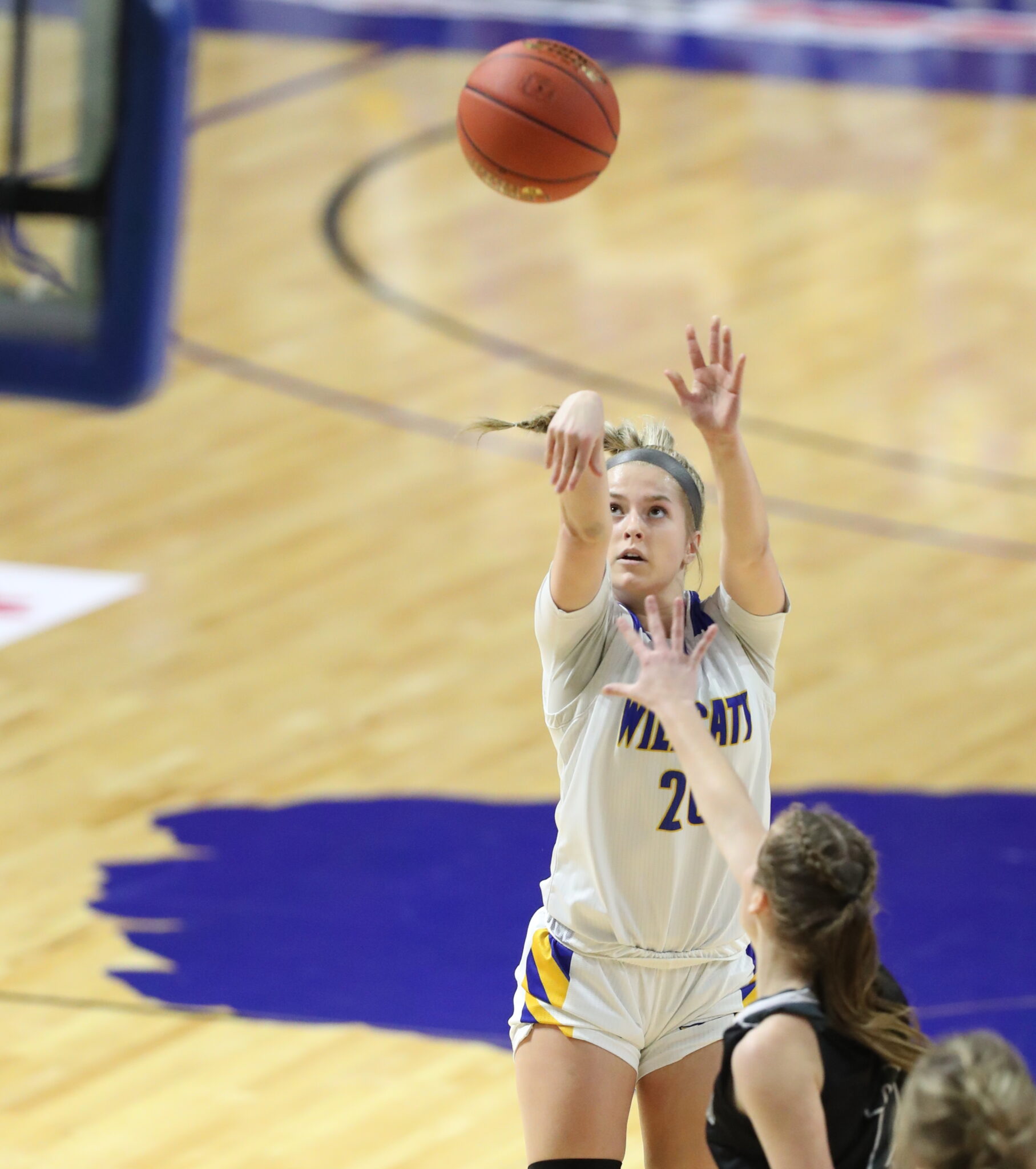 Logan guard Peyton Ilderton offered her commitment to Marshall, where she will continue her career on the hardwood. Photo by Eddie Ferrari

Since leading Logan’s girls basketball team to the first state championship in program history March 12, things have hardly slowed down for Peyton Ilderton.

Ilderton partook in celebrations when the Wildcats returned home with their desired hardware. She was named captain of the Class AAA all-state team in late March, during which time, much of Ilderton’s attention was geared toward finding a destination to continue her career at the next level.

Late Monday, Ilderton settled on that choice, and the point guard announced Tuesday morning her commitment to join the women’s basketball program at Marshall.

“I visited Marshall during my high school season and got to watch a game,” Ilderton said. “I love the campus and coaching staff. It’s close to home. After watching the girls play, I felt it was really like a family. That’s definitely something I want to play for, especially coming from Logan. Everybody knows the Logan community is like a big family, and that’s how Marshall is.”

“Ultimately my heart was with Marshall, and that’s where I want to be,” Ilderton said.

As a junior, Ilderton helped Logan to a state semifinal when she earned Class AAA first-team all-state honors with an average of 21.5 points.

In her final season at Logan, she refused to settle for anything less than going out on top. Ilderton averaged 23 points, 4.9 rebounds and better than four steals per game. Her efforts on both ends of the court, combined with quality leadership, helped lead Ilderton to being named Cardinal Conference Player of the Year.

“She’s the best player in the state,” Logan head coach Kevin Gertz said the week of the state tournament. “She defends like no other.”

Ilderton, a Class AA second-team all-state honoree as a freshman and sophomore, is hopeful her success throughout high school translates to Marshall, which allows her to play less than two hours from her hometown.

“It definitely meant a lot to me,” Ilderton said of Marshall’s proximity to Logan. “While I’m there, a lot of fans from Logan will come. That will really help. I wanted to be somewhere my family could come watch me play and visit me. That was a huge factor in my decision.”

Maier and Ilderton were previously teammates on the AAU circuit for the West Virginia Thunder.

“I’ve played against Olivia. I haven’t gotten to build a relationship with her, but we’ve been talking since she committed,” Ilderton said. “I’m excited to be back on a team with Meredith. She’s a very good player. We’ve built an amazing relationship and I’m excited to build on that and get to play with her again.”

With the various roles Ilderton filled at LHS, she was counted on to provide much more than statistical production. Ilderton consistently defended the opposition’s top perimeter player, and because of her play and experience, she was the heartbeat a Wildcats’ team she helped will to a state championship.

“My defensive intensity is something I can bring to Marshall and my shooting,” she said. “I’m working on ball-handling and getting that stronger, because the competition is a lot higher. I also want to get my shot more accurate so I’m more consistent with it.

“Every time I’ve talked to [Marshall head coach Tony Kemper], he’s let me know that he really likes my intensity and how I’m a competitor. That’s something he looks forward to while coaching me. I’m very competitive and that’s something you need going to the college level.”

Settling on a college and realizing a lifelong dream in the process helps to slow things down for Ilderton, whose focus in the immediate future is becoming the best version of herself before beginning her career with the Herd.

“During states and after we won, a lot of pressure was off of other people, but I was still trying to find my school and everything,” Ilderton said. “I had to visit schools and talk with parents and that’s really all I’ve done since basketball ended. For the recruitment to be over is a relief. I’m excited to get with my trainers, work hard and get better so I can fit my skills into Marshall’s program. I’m really excited for the new chapter to start.”