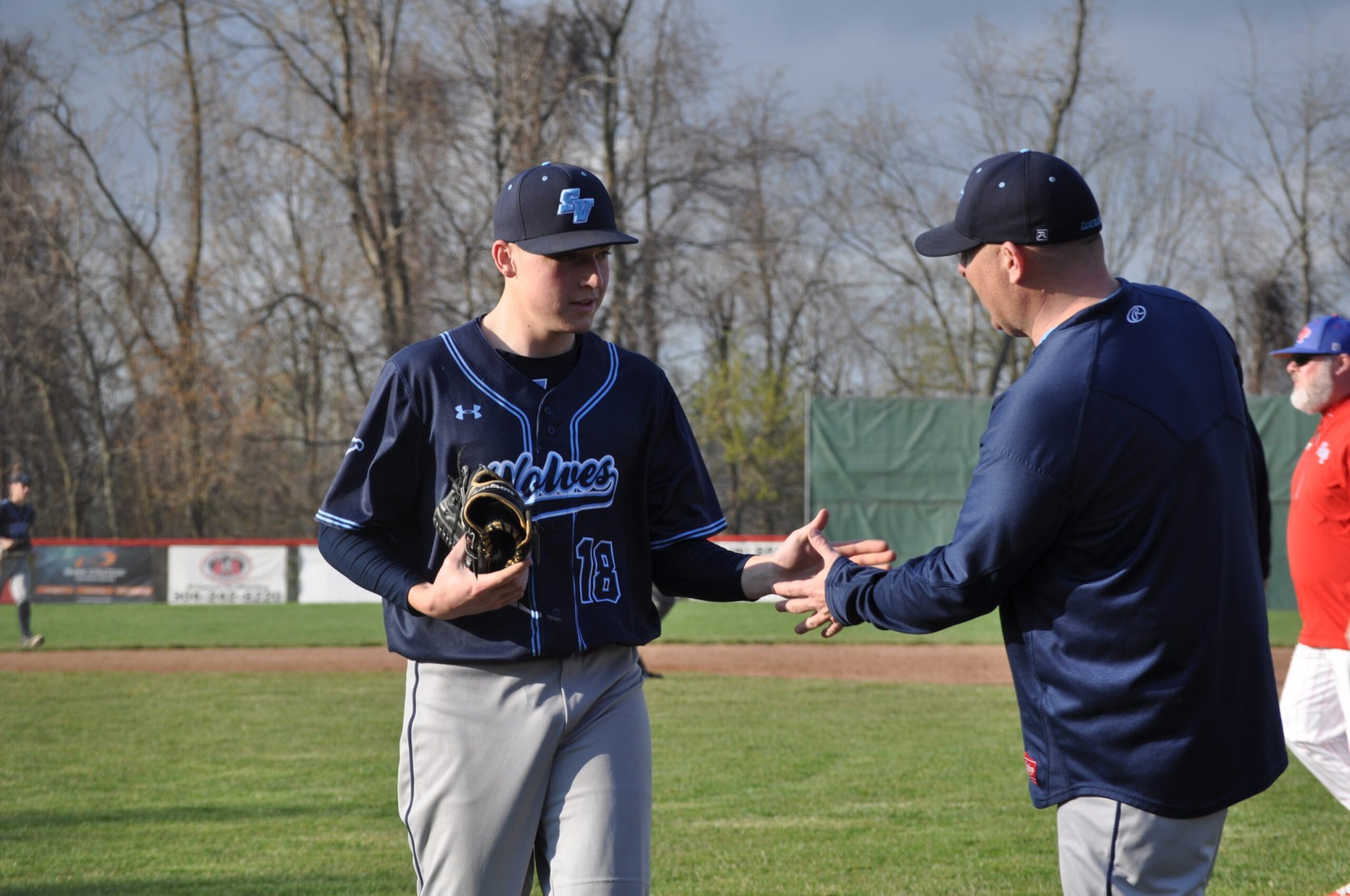 That allowed the Timberwolves to take control of their road matchup with the Patriots as they opened up a 7-0 lead en route to a 9-2 victory.

In actuality, SVHS was in control of the contest throughout because of the way left-handed junior Branson McCloud was pitching.

McCloud was one out away from registering a complete game shutout, and the southpaw held a quality Wheeling Park lineup scoreless over six-plus innings, while proving overpowering at times and striking out nine.

“He was locating his fastball really well inside, outside,” Timberwolves’ coach Austin Pratt said. “He threw that about 80 percent of the time and mixed in some changeups. They have some good hitters in the middle part of their order and the three hole hitter hits the ball real well. But he mixed in some changeups and curve balls to keep them off balance, and he really focused on his fastball. He gets a lot of movement with his two-seam outside to righties.

“He’s done that all year and been a dependable arm. He goes deep into games.”

Jamison’s Smith second-inning RBI single allowed the Timberwolves to score the game’s first run, while McCloud struck out a pair of Patriots in each of the first two innings to set the tone.

SVHS then strung together quality at bats throughout the third inning to score six and gain a sizable lead.

Grant Stratton led off with a walk and scored after Bryson Hayton’s infield single resulted in a throwing error. Jacob Maynard followed with a double to left-center that scored Hayton for a 3-0 lead.

After the first out of the frame, Spring Valley continued to pour it on and got a double from McCloud just inside the first base bag to score Maynard. Designated hitter Sammy Booth provided a single to center later in the third that brought home Jayden Harbert for a five-run advantage.

Smith’s run-scoring single, along with a sacrifice fly to right off the bat of Stratton enabled SVHS to up its advantage to 7-0 going to the bottom of the third.

McCloud struck out the side in the third and the Timberwolves added to their advantage in the fourth courtesy of McCloud’s RBI double to left and Booth’s sacrifice fly.

“It seemed like everybody was on base through those few innings we hit the ball well,” Pratt said. “We’ve done that at times and we’ve struggled at the plate at times. It did seem to fall our way on some balls we didn’t hit that well that dropped and found gaps, but that’s baseball sometimes. You have to put it in play to get lucky, so credit our guys for not striking out a lot and putting it in play to see what happens.”

McCloud had a chance at the complete game shutout until Jared Marsh connected for a two-out single that scored Braydon Kupsky. Another single from Michael Bittinger allowed Grant Simons to score the Patriots’ second run, before McCloud induced a ground ball to second off the bat of Luke Marsh for the game’s final out.

“Obviously he’d have liked to have had the shutout, but a good-hitting team is going to figure it out the third time through the order,” Pratt said.

McCloud allowed nine hits in the complete game win, four of which came in the final inning. He issued only one base-on-balls.

“That’s probably the best pitcher we’ve faced this year by far,” Patriots’ coach Steve Myers said. “He had a good fastball and was able to spot up his curve ball. He had good command. We looked at one point and he had 30 of 38 pitches as strikes. He’s always around the plate and that’s a good, quality pitcher for sure.”

Dylan Hodgson took the loss for WPHS after allowing seven runs on nine hits over 2 1/3 innings. Luke Myers came on in relief and tossed 4 2/3 innings, yielding two runs on five hits. The duo combined for only one strikeout as the Timberwolves consistently put the ball in play.

McCloud and Luke Stollings had three hits apiece among Spring Valley’s 14. Maynard and Smith added two each in the victory.

McCloud joined Booth and Smith as Timberwolves to drive in two runs.

“It says a lot about or players that they competed all the way through,” coach Myers said. “Things weren’t going our way early, but they settled down and we had better at bats as the game went on. You build on it and it’s something to definitely build on and say, ‘alright guys, you can be in any game.’”