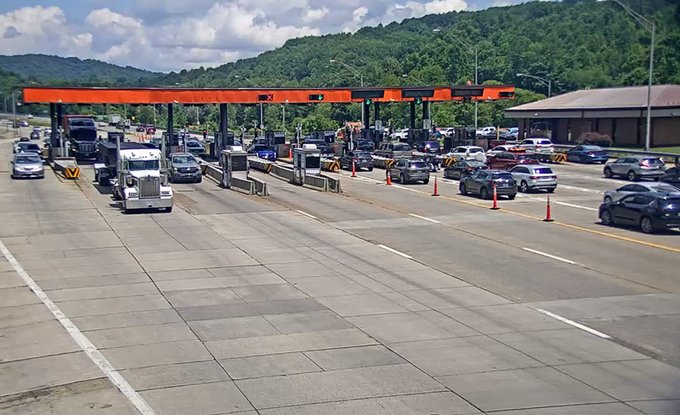 The current tolling system was implemented in 2008. (Photo/Gov's Office)

The authority gave the okay Wednesday to a $24.8 million contract with technology company TransCore which plans to take 18 months to make the changes. The current system has been around since 2008.

Parkways Authority Executive Jeff Miller said the upgrade will help both sides of the turnpike system.

“The patron will see enhancement across the entire Turnpike, both roadside and through the customer service center,” Miller told MetroNews. “Essentially, it’s bringing the West Virginia Turnpike the ability to implement state-of-the-art technology.”

Improvements will come at the toll plazas and on the Parkways’ website including improvement account maintenance and the process of purchasing an E-ZPass.

TransCore will use new cloud-based technology to bring the Turnpike’s tolling to a place where it one day could accept more cashless tolling, Miller said.

Miller and the Parkways Authority is often asked when credit cards will start to be accepted at the toll plazas. Miller said the upgrade will allow for that to take place but it will be tested first to make sure it doesn’t slow down traffic.

“If the acceptance of credit cards or any additional forms of payment, if it in any way slows down traffic and creates backup, that’s a safety concern,” Miller said. “We want everyone to utilize E-ZPass. We have the greatest discount program in the entire country for 2-axle passenger cars and everyone should be taking advantage of that program.”

The current E-ZPass program is $26.25 annually for unlimited use of the Turnpike. Without, motorists pay $4.25 per toll plaza. Commercial traffic pays more.

The new system will also enable the Parkways Authority to keep all lanes open at all times at the toll plazas, Miller said.

“Each lane will now have the variable dynamic message boards above it. It will be digital and colored and we’ll be able to change those lanes as the traffic pattern shifts,” Miller said.

For example, if a toll collector has to step out of the booth for a short period of time, the sign can change that booth to an E-ZPass lane instead of shutting the lane down altogether.

Another significant upgrade will be the technology used to take photos of the license plates of non-payers. Miller said the technology has been greatly enhanced in recent years and will provide a higher resolution photo of front and rear license plate numbers.

Miller credited Gov. Jim Justice and members of the Parkways Authority for their support for the pending upgrade of the tolling system.