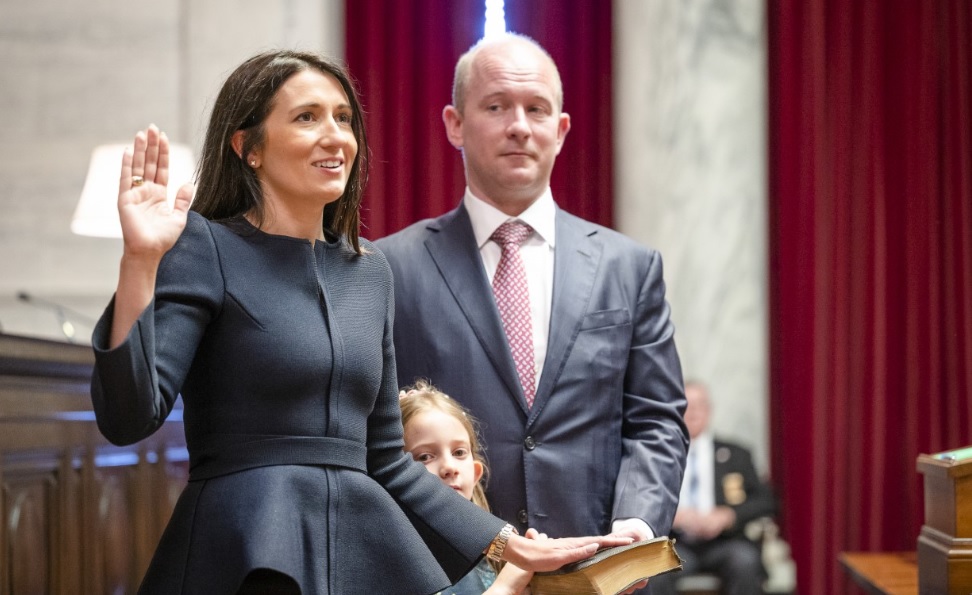 CHARLESTON, W.Va. — New state Supreme Court Justice C. Haley Bunn told a large crowd gathered in the Supreme Court’s courtroom Thursday that she would be guided on the bench by faith, integrity and the rule of law.

Bunn, 36, who was appointed by Gov. Jim Justice April 6 and sworn-in during a private ceremony a few weeks ago, was honored during an investiture ceremony Thursday.

Bunn said she wants to emulate West Virginia during her time on the Court.

“West Virginia was founded on principles of faith, integrity and a deep and abiding commitment to the equality of her people,” Bunn said. “She was founded in an unconventional way but she was born of a refusal to take the easy way out.”

Bunn, a Wyoming County native and mother of two young girls, who replaced former Justice Evan Jenkins on the Court, said she’s committed to the rule of law.

“By linking arms with circuit judges to have cases decided in an expedient and fair manner according to the rule of law,” she said.

Bunn also pledge to support the Family Treatment Court initiative that started in 2019 and is now in 11 counties. The courts are designed to help families deal with addiction and family issues.

“These families who are in these programs are part of the foundation of our great state and our communities and it’s worth fighting to preserve that wherever it’s possible,” she said.

Bunn’s law career includes being in private practice and time as an Assistant U.S. Attorney. She said she became a federal prosecutor to help fight the opioid epidemic.

“Growing up in Wyoming County, the way of life I enjoyed growing up has been threatened by the opioid epidemic. It is truly scary to me there may not be an opportunity to have the upbringing that I had because of the ravages of the opioid epidemic,” Bunn said.

Bunn, a graduate of the WVU College of Law, quoted Psalm 16:7 to end her remarks.

“I will praise the LORD, who counsels me; even at night my heart instructs me.”

“Always do the right thing even or especially when that’s the hard thing,” she said.

Bunn took the ceremonial oath of office with her husband Joe holding a Bible and her oldest daughter by her side.