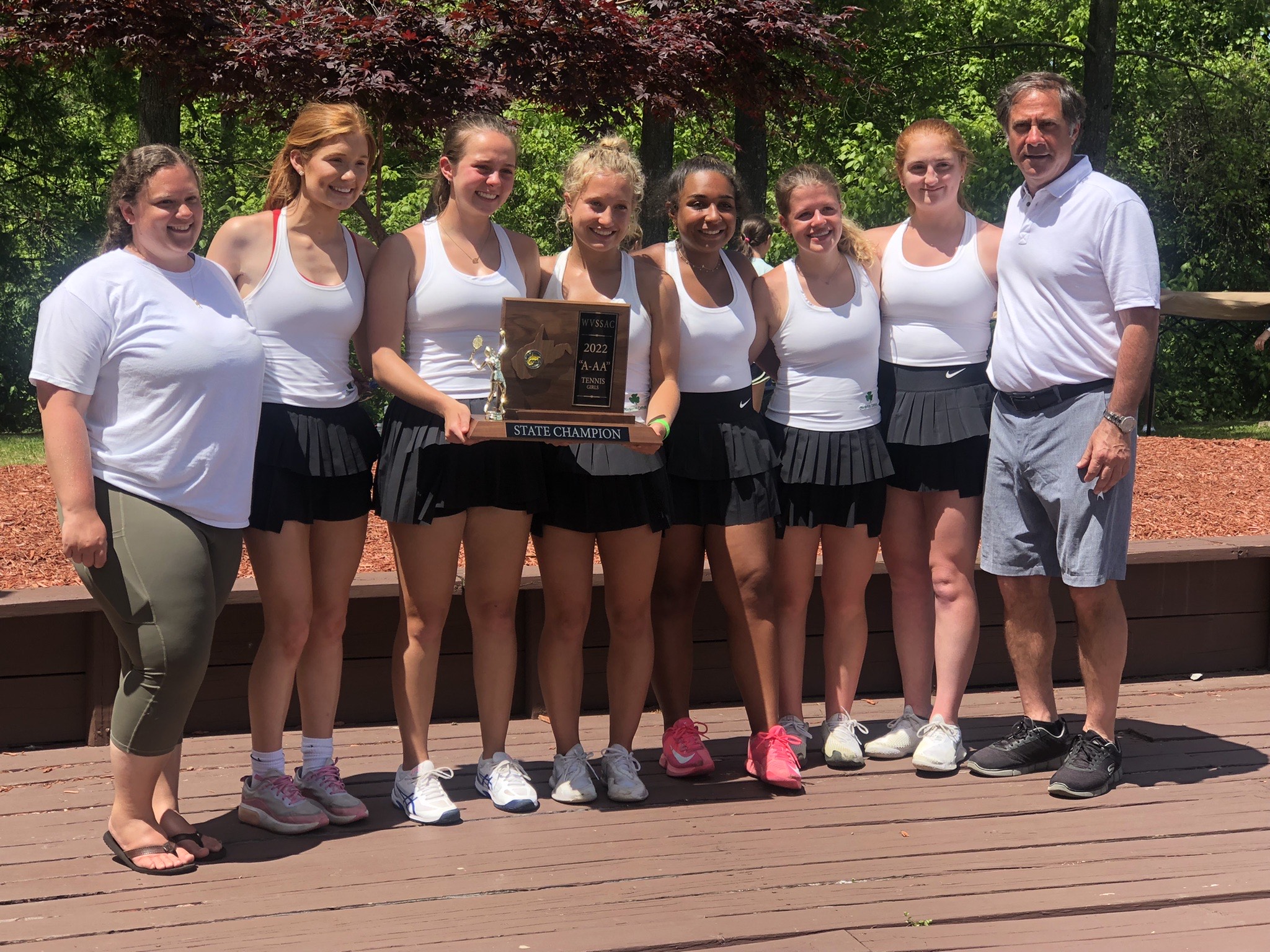 CHARLESTON, W.Va. — History repeating itself was a theme Saturday for the culmination of the Class AA-A boys and girls state tennis tournaments at the Charleston Catholic Players Club.

For a second straight year, team titles were garnered by Williamstown’s boys and the Charleston Catholic girls. It marked the fourth championship the WHS boys have garnered and it came after the Yellowjackets’ won two of four singles titles and all three doubles titles.

“They have practiced so hard, and they come to practice and then some of the top ones go to practice afterwards until 9 at night,” WHS coach Diana Leo said. “They go in before school in the morning. The maturity level and their determination to be the best is amazing. They pull for each other.”

Williamstown’s doubles play was critical in allowing the Yellowjackets to repeat. Brothers Austin Bosgraf and Gavin Bosgraf scored a victory over Charleston Catholic’s Nick Giatras and Connor Waybright in the No. 1 final.

That was the final match of the event and wrapped up the team title, which saw Williamstown best runner-up Charleston Catholic with 17 points to the Irish’s 15.

“Their play together is immaculate and it’s amazing how those two work together,” Leo said. “They could go out on a college court right now and beat people, because they have such good mojo and communication and they’re very mature.“

In No. 2 doubles play, the WHS duo of Rainer Holl and Tyler Fenton teamed for a 6-1, 6-1 victory in the final over Keyser’s Hunter Powell and Kaleb Kitzmiller.

“We had a hard time deciding who was going to be our third doubles boys team this year, because we have a lot of depth,” Leo said. “We had two boys that played last year in a state championship and it was hard not putting them as the third doubles. But the freshmen came in and proved that they could do it.”

On the singles side, Holl claimed a No. 2 title with a 7-5, 1-6, 7-5 win over Waybright. The Yellowjackets also got a first-place finish in No. 4 singles play from Gavin Bosgraf, who scored a 7-5, 6-4 victory against Winfield’s Mitchell Proper.

The two titles not won by Williamstown both went to Charleston Catholic, which narrowly missed out on a team title one year after not having a boys program.

“We prepared and coached all year to play Williamstown,” Irish coach David Sadd said. “We didn’t win and I told them we got outplayed by a good team and we got beat. There’s nothing wrong with getting beat. Tip your cap and go on.”

For the Irish girls team, a second consecutive championship marked title No. 15 for the program. Each of those championships is from 1996 on, with all but one since 1999.

This one featured two singles titles and a pair of doubles championships as CCHS had no difficulty playing at its desired level despite consistently taking the opposition’s best shot in large part because of the Irish’s successful history.

“We deal with the pressure of everybody trying to knock you off,” Sadd said. “No offense to the San Diego Padres, but I tell the kids, ‘Nobody hates the Padres. They hate Tom Brady, the Yankees and the Dodgers. So either be comfortable with it or don’t.’ Our kids have done a really good job of dealing with the pressure of people after them all the time.”

The Irish totaled 16 points to runner-up Chapmanville’s 11, and a big reason why was the play of freshman Nadia Orcutt and junior Annie Cimino.

“It’s so nice to be able to have a kid go out there and take care of business in straight sets with no tough sets,” Sadd said of Orcutt. “Easy matches from Thursday all the way through, which gives us a chance to spend more time on matches that are closer.”

The same duo was instrumental in helping Catholic claim two doubles titles. Orcutt and Hannah Attasi secured a 6-1, 6-1 victory in the No. 1 final against the Huntington St. Joseph duo of Reagan Haughey and Jenna Bates.

Cimino teamed with Molly Murphy to give CCHS a No. 2 doubles championship by virtue of a 2-6, 6-3, 6-4 win over Logan’s Brooke Wooten and Ashton McDonald.

“She’s got the biggest heart in the state. She lost the first set playing singles and doubles today and comes back and wins in three sets. It’s not easy out here. This is no place for somebody that is only integrated into team sports. You have to be pretty comfortable in your own skin with everybody watching you.”

Of the remaining three girls titles, two were claimed by Williamstown, which finished in third for a second straight year. The Yellowjackets’ Audrey Fenton took the No. 4 singles championship with a 6-3, 6-2 win over the Tigers’ Carmen Mahon. Williamstown also got a No. 3 doubles title as Claire Strobl and Athenn Stewart teamed to defeat Chapmanville’s Emily Carter and Emily Hughes 6-2, 6-3.

Chapmanville’s Emma Bryant was the No. 3 singles champion, a title she claimed with her 7-5, 6-4 win over Williamstown’s London Flores.