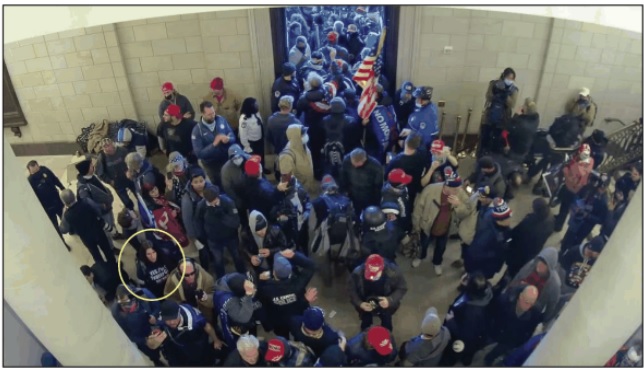 A West Virginia National Guard member accused of surging into the U.S. Capitol on Jan. 6 has started her case’s consideration in the federal court system.

Jamie Lynn Ferguson appeared at an initial hearing Tuesday afternoon before U.S. Magistrate Judge Robin Meriweather in U.S. District Court for the District of Columbia. A status hearing has been set for 1 p.m. July 14.

Ferguson has been released on personal recognizance with a few restrictions. Ferguson, who has been living in Collinsville, Va., received permission to travel for her work to North Carolina and West Virginia. “She would be traveling to Charleston, West Virginia, for National Guard duties,” her lawyer, Timothy Anderson, told the magistrate judge.

Ferguson came under scrutiny by Jan. 14, 2021, when the Department of the Air Force’s Office of Special Investigations provided an investigative analysis report to the FBI indicating that Ferguson was suspected of unlawfully entering the U.S. Capitol with hundreds of others while members of Congress fulfilled their constitutional duty of certifying the presidential election.

A review of Ferguson’s leave requests confirmed that she was on leave from Jan. 5 to 7 that year, listing her destination as Washington, D.C. Agents reviewed her social media posts leading up to Jan. 6 and took note of an image of a crowd in front of the Capitol with a storm cloud above. She captioned the post, “I pray this is exactly what D.C. will look like on Jan. 6th. #HoldTheLine.”

Footage shows her remaining in the Rotunda and its adjacent entryway until exiting at 3:33 p.m.

In an interview with investigators, Ferguson said she had been at a rally to support President Donald Trump from about 9 to 9:30 a.m. that day.

After the rally concluded, her mother and father left but Ferguson went on to the U.S. Capitol, later telling investigators that she believed she would be able to see President Trump again.

She acknowledged to investigators that she entered the Capitol building and stayed for about 40 minutes.

Several more West Virginians were charged in that day’s events.