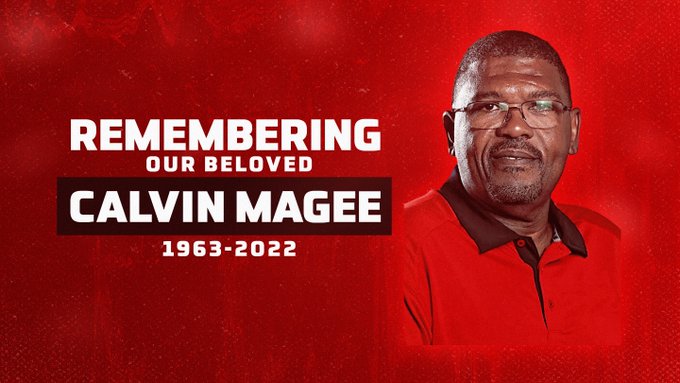 Magee, who was 59, was set to be the offensive coordinator at Jacksonville State University for former Mountaineer football coach Rich Rodriguez.

Rodriguez released a statement Friday afternoon mourning the death of his longtime friend.

“Our hearts are broken with the loss of our beloved friend Calvin Magee,” Rodriguez said. “Calvin was a great husband, great father and grandfather, great coach, great friend and great man. He impacted my life and the lives of so many others in a positive way.”

Jacksonville State Football is heartbroken to have lost a beloved member of our program.

Magee went with Rodriguez to Michigan after the 2007 season. He coached at Pitt in 2011 before following Rodriguez to Arizona. He’s been at several other schools since including last season at Duke before joining with Rodriguez for a fourth time when RichRod was named Jacksonville State’s head coach.

“Our thoughts and prayers are with his beautiful family,” Rodriguez said. “Our world is less but heaven got better. I miss him dearly already. I love you brother.”

I love you my brother pic.twitter.com/kw0ArGwjXY

Former Mountaineer defensive coordinator and current North Carolina State Defensive Coordinator Tony Gibson tweeted that he had the honor and privilege of knowing Magee for 21 years.

“I am heartbroken for Rose and the family he was not only a great coach but an amazing father and husband. He will be missed by so many!We Love You!!!”

I had the honor and privilege to work with Calvin for 12 yrs and call him a friend for the last 21! I am heartbroken for Rose and the family he was not only a great coach but an amazing father and husband. He will be missed by so many!We Love You!!!

Magee was an All-American tight end at Southern University and played in the NFL with Tampa Bay.

He is survived by wife Rose, daughters Jade and Jasmine, son Bryson, and grandchildren.