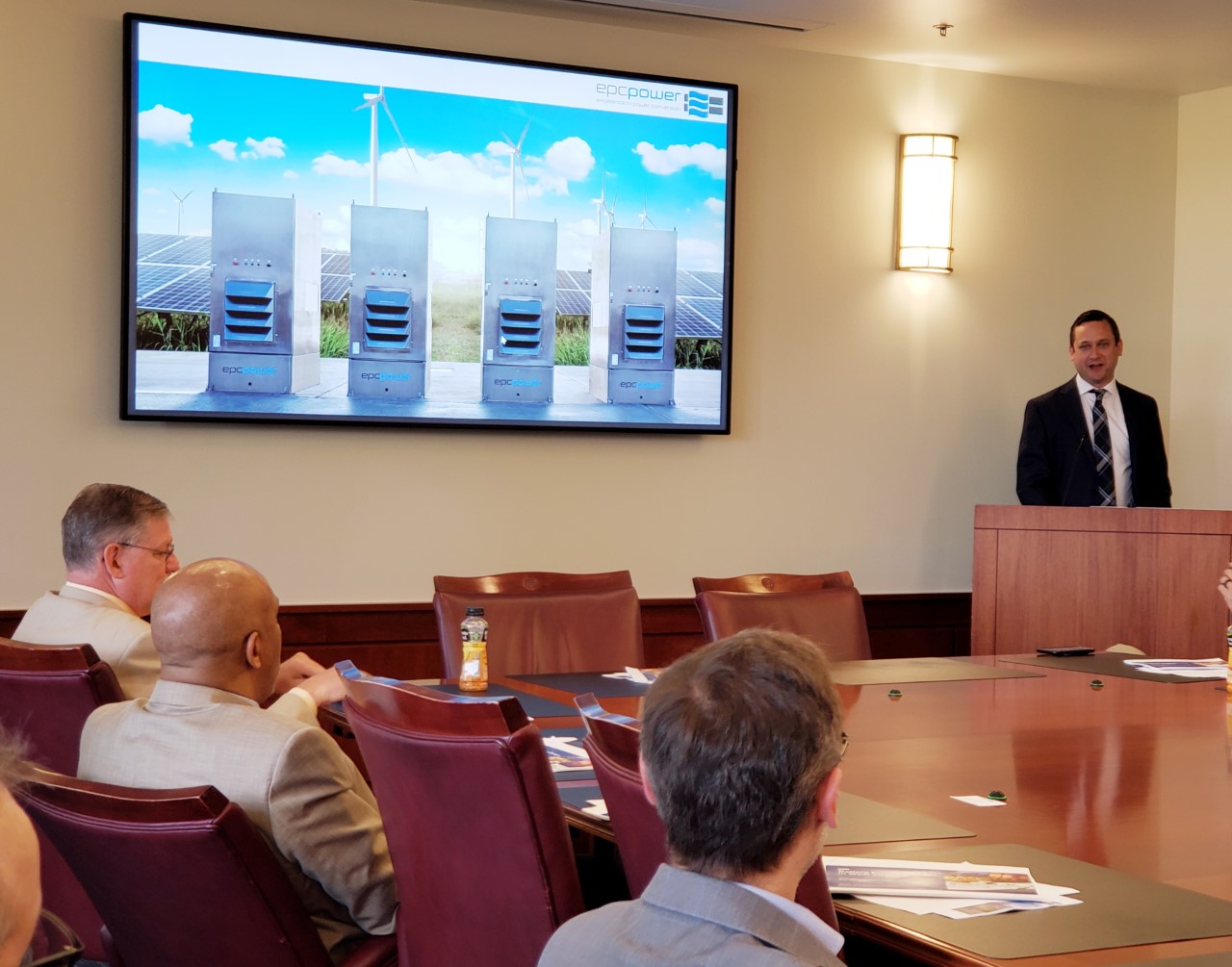 This isn’t batteries for your Chevy Volt. It’s grid-level storage that can support not only the obvious wind and solar, but coal-and gas-fired generation too.

Members of the Joint Energy Committee heard from two industry experts during May interim meetings held at WVU.

Adam Kabulski is vice president for Sales and Marketing for EPC Power Corp. and a Fairmont native. The company makes grid interface inverters that convert DC power from battery modules into AC power for a grid.

PCS’s can help solve a number of problems, Kabulski said. Grid power demand has peaks and valleys and stored power can save a company money by allowing it to draw from storage when demand charges go up.

They can provide backup power in times of interruption. For power plants and grid systems, they can respond quickly to grid demands and anomalies, as the fossil-fuel generators are designed to be steady paced while battery systems can quickly and automatically respond to fluctuations.

Kabulski said EPC is building a 227 megawatt site in California to store solar power from an array near a substation.

He advised, ‘Get involved early. This is going to be on the grid everywhere soon.”

The battery market is 90% lithium based, he said, and lithium mining is dominated by Australia, with Nevada being the number 2 producer. Battery manufacturing is dominated by Asian companies. EPC batteries are made domestically (using lithium) and employ only U.S. personnel.

Kabulksi said there is no one solution for supplying power into the grid. Thermal generators have a role and PCS’s have a role. The key is to find the balance.

Answering some legislator questions, he said batteries have a 12-16 year commercial life, with another 5-10 years of useful life after that, suitable for research or serving impoverished communities. The problem is no one will warrant them.

Batteries are recyclable, he said, with 90% of the material having commercial value. Manufacturers have free takeback program but recycling programs are not where they need to be. “We’ve got a lot of work to do to actually have a recycling program and make them useful again. … I certainly think its something the industry needs to push harder on.

Enel has six utility scale projects in the works in West Virginia, he said, with a total 769 MW of power generation and 185 MW of storage.

He talked about one in Raleigh County. It’s what Enel calls a Solar + Storage project. It will have a combined generation capacity of 120 MW with a 30 MW battery system to smooth the energy supply. That power will go into the PJM regional energy grid.

Harrington said Enel is also developing a partnership with WVU to support its Energy and Environments program and collaboration with WV Women Work.

Harrington told the legislators that this kind of commercial investment has grown from $629 million in 2019 to a projected $9 billion in 2026.

Lawmakers should keep in mind, he said, that regulations and policy structures help companies determine where they’ll direct their investments.

State engagement, he said, should include such things as streamline permitting, updating the interconnection process and supporting growth of research.