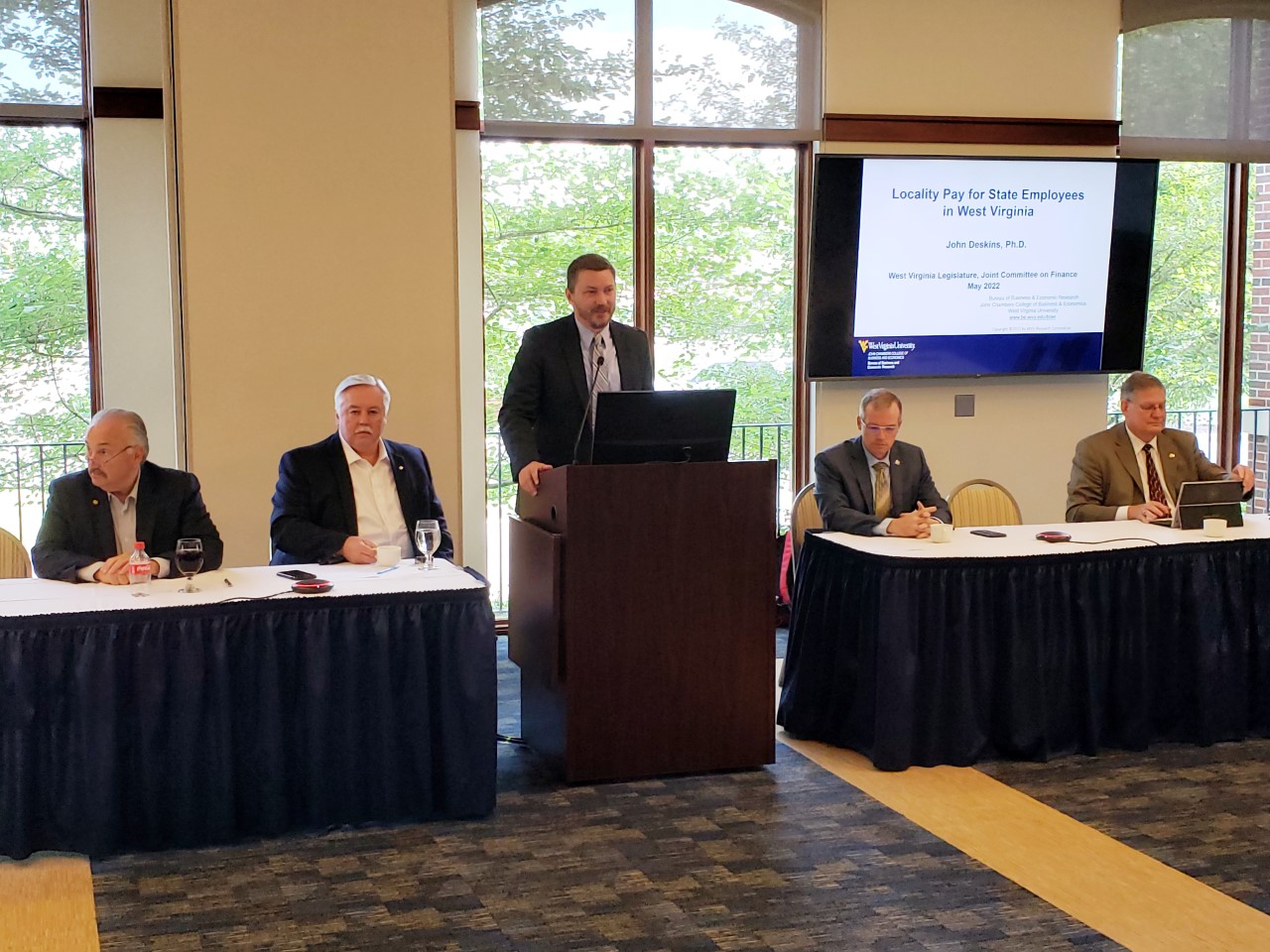 The Joint Standing Committee on Finance took up the topic on the third and final day of interim meetings held at WVU.

John Deskins, director of WVU’s Bureau of Business and Economic Research offered an overview and posed the questions they’ll have to answer.

Locality pay has been a topic of debate for teachers and corrections workers. But it came to the forefront during the most recent regular session after State Police Col. J. L. Cahill raised the issue for Eastern Panhandle troopers, where they can obtain substantially higher pay a few miles away in neighboring states.

The state employee pay raise bill that passed at the end of the session included a $10,000 raise for all state troopers in lieu of locality pay.

The cost of living varies across regions in, he said, and it could be hard to attract qualified employees to those areas if the wage doesn’t reflect the private sector.

Deskins told the members that federal locality pay is based on pay scales and applies when the disparity is greater than 5%.

Virginia has locality pay for a handful of northern counties near the D.C. area, called the Northern Virginia Expanded Pay Band, where pay is 20% to 30% above the state baseline for certain jobs.

Creating a West Virginia locality pay program, he said, will require a lot of work. “This is not a trivial matter.” One problem is that data is scant and tends to be at the statewide level, taking into account metro versus non-metro areas. The data gets worse and less precise as the area gets smaller.

The questions to answer are many. Deskins posed some and legislators added more.

Do they base locality pay on cost of living or job pay scales? Do they promote fairness and target all state jobs in an area or just those facing shortages and recruitment challenges based on neighboring state and/or private sector wages?

He said he believes targeting shortage occupations is the most practical approach.

How will locality pay affect neighboring counties? Deskins cited the example of Morgantown, where it’s a bit more expensive to live. If the state would offer a differential based on cost of living, how would that affect Marion County?

On the same topic, will locality pay cause workers to migrate out of counties without it to those counties that have it, exacerbating the problem?

Delegate Brent Boggs, D-Braxton, said that when WVU offered bonuses to recruit nurses, it drew people away from his area.

“We’ve got to do something, I believe, to lift all boats,” he said. “You’re going to have s lot of discontent for people doing the same job for a fraction of the amount of money.”

More questions. Will it snowball and spin out of control – driving up private sector wages and requiring further state adjustments? How will it affect the state budget?

Sen. Owens Brown, D-Ohio, made the point that raising certain wages can help boost the local economy, but Deskins pointed out that a dollar in also requires a dollar out – someone covers that with higher taxes, and that has to be considered.

How will it affect state employee pensions? Should locality pay be factored in to pension calculations or should it be kept level for all? And how do jobs where benefit packages compensate for lower wages factor in?

Delegate Marty Gearheart, R-Mercer, raised another: What about people who work in one place but live in another where the cost of living is lower? Deskins said the norm is basing the pay on the job location, not the worker’s residence, but that’s another policy decision.