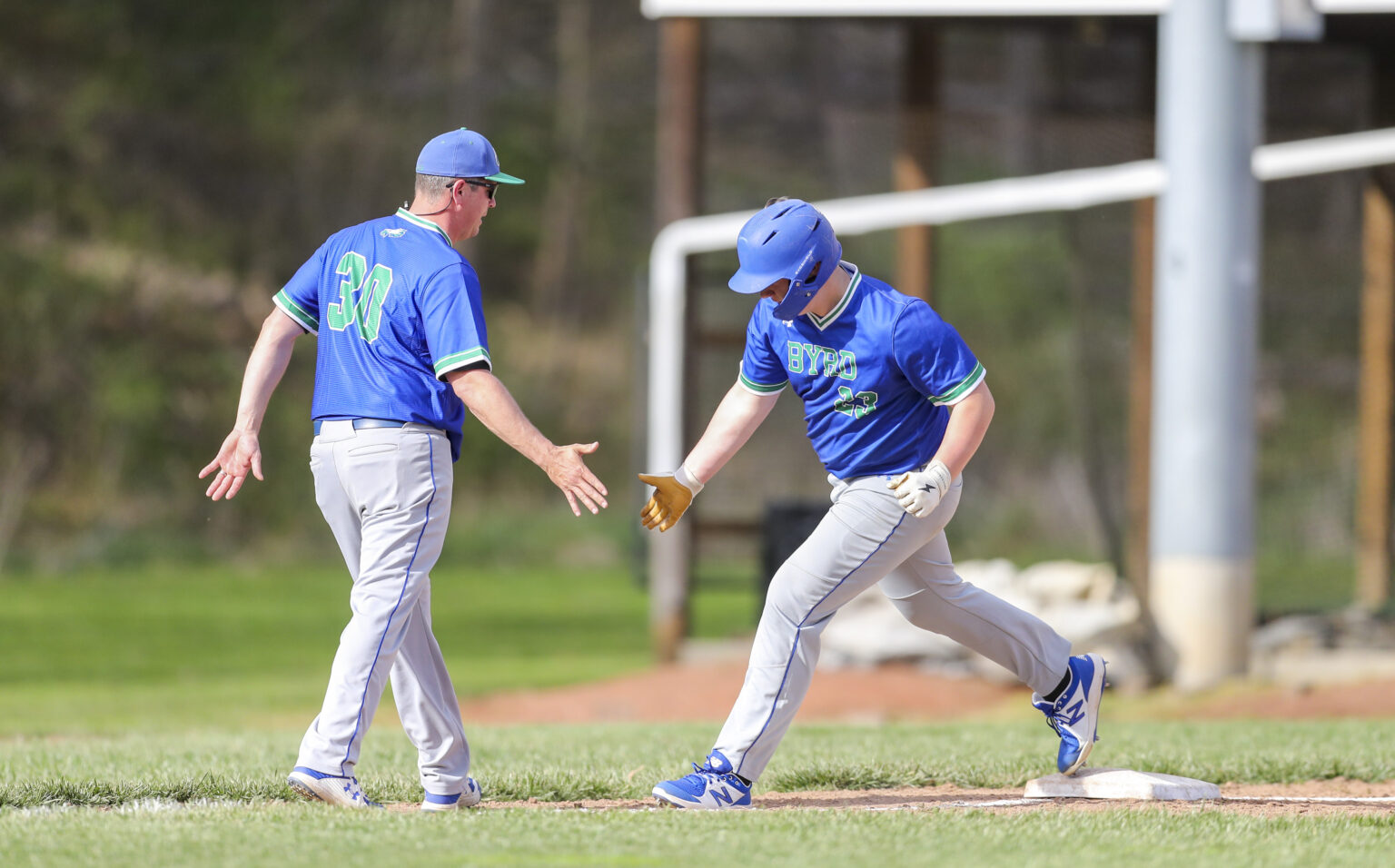 CLARKSBURG, W.Va. — When Tanner Hill began his journey as baseball coach at Robert C. Byrd in advance of the 2019 season, he was aware a multi-year project was in store.

“When I took over the program, we were the worst team in the Big 10 that year,” Hill recalled. “I was playing almost all freshmen and we had 12 guys on the roster.“

Hill had to wait an extra year for his second season of coaching when the 2020 campaign was wiped out as a result of the COVID-19 pandemic.

The Eagles made major strides in 2021, finishing with a 19-11 record and displaying plenty of promise, before falling short in sectional play with consecutive losses to Philip Barbour and Lincoln.

“Last year, we had a good club and we peaked too early,” Hill said. “We peaked in April and we kind of fizzled out in the sectionals. This year, our goal was to be not so much the greatest team in April, but to be peaking exactly at playoff time in sectionals and regionals. It seems as if we’re hitting our stride just as planned.”

Indeed, the Eagles have peaked at the perfect time in 2022, and after recently securing the program’s first state tournament appearance, anticipation is building and excitement isn’t hard to find as Robert C. Byrd awaits discovering its opponent Thursday in a Class AA semifinal at Appalachian Power Park.

“There’s a lot of buzz,” Hill said. “With our team and the community, we’re getting a lot of support, calls and a lot of people talking.”

The Eagles locked up their first spot in a state tournament with a pair of impressive victories over Herbert Hoover last week in a Region II series. Following a 5-0 win in Clarksburg, RCB had its way to the tune of a 9-1 win in Clendenin to finish off the sweep.

“We played really good team defense and we hit the ball well. If we keep doing that, we’ll be really successful,” said senior Nathaniel Junkins, who belted three home runs over the two wins against the Huskies.

Until Bluefield and Shady Spring finish their Region II series with Saturday’s winner-take-all game, the Eagles won’t know their opponent in Charleston. It’s assured to be the winner of that game, defending state champion Logan or nearby rival Fairmont Senior.

Regardless of the opponent, Hill likes the challenges the Eagles (26-9) present.

RCB has scored at least 10 runs in 15 games and 14 victories, while allowing three or fewer runs in 14 games. Over three sectional victories against Elkins, Philip Barbour and Lincoln, the Eagles allowed six runs, then held the Huskies to one over two games.

“Offensively, we’re pretty well-rounded,” Hill said. “We’re one through nine, but we have power in the middle, speed and we bunt and hit-and-run. We do a lot of things and it’s tough to slow down. Our pitching has been there all year long, especially our three studs of Junkins, [Luke] Sperry and [Nick] George. The other guys have done a nice job, too, when called upon. I believe we are a complete team and we have a good shot at making a run.”

Junkins and Sperry are among two of the team’s five seniors that graduated Friday evening. Sperry tossed a shutout in the regional opener against the Huskies, while Junkins picked up the victory in the second game. Also included in the group of seniors are Waylon Dodd, Evan Warne and Tanner Cook, with the latter manning centerfield and serving as a key part of the team’s success.

Of all Cook does, his defense and base-running are among the most important aspects, with both being predicated off his surplus of speed.

“We were coach Hill’s first class that’s actually been with him four years at RCB,” Cook said. “We’ve created a good bond with him and there’s a lot of chemistry on the team.

“It’s kind of surreal, because freshman year we were at the bottom of our section,” Cook continued. “Last year, we didn’t come out of our section. This year, we’re going to states. It’s a lot to bring in, but I feel like we’re all ready for it.”

After securing the state tournament spot with Wednesday’s win at Hoover, Hill gave the Eagles Thursday off and they conducted a light practice Friday. After discovering its semifinal opponent Saturday, RCB will ramp up preparation in advance of the contest, along with playing a tuneup Tuesday at Class A state tournament qualifier Williamstown.

The Eagles are also hoping to get closer to full strength after George, a key pitcher and heart of the order hitter, missed the regional with a pulled hamstring.

“We’re getting healthy, preparing ourselves and we’ll really get into it next week on Monday,” Hill said.

Part of the preparation will be trying to ready themselves for a stage the program has never performed at. Appalachian Power Park is not only far more spacious than the normal high school field, it will also feature an environment with more people watching than a typical game and likely more nerves for players and coaches alike than the typical contest.

“I expect a pretty big atmosphere,” Junkins said. “Having my teammates with me, we’ll be able to get through it.”

Cook, who has dreamed of playing on this stage, believes he and his teammates need to envision themselves making plays in warmups as they try to grow accustomed to lengthier dimensions and covering more ground.

“Coming out pregame, getting a feel for it and heading out to your position and taking a look. Imagining what happens when a ball comes to you and where you are,” Cook said.

While the Eagles’ focus is on advancing to championship Saturday, the team’s seniors are hoping to help the squad stay grounded while soaking in an entirely new experience.

“It means the world,” Cook said. “Baseball is everything. It’s amazing to finally have a season that goes into the summer.”