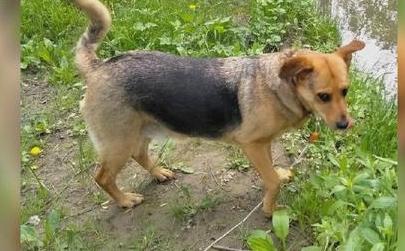 Heidi, a German Shepherd mix, has been missing since May 21. (Submitted photo)

MORGANTOWN, W.Va. — A Colorado woman is still searching for her service dog that she lost near Morgantown earlier this month.

The dog, named Heidi, is trained to help Bridget Spangler detect seizures and get her help if she becomes incapacitated.

Spangler said she was riding with her fiance on Route 43 in Pennsylvania near the Monongalia County line on May 21 when he suffered a medical emergency and crashed the vehicle. Heidi panicked and jumped out of the back window and ran toward the Pennsylvania line.

“Heidi looks like a small German Shepherd. She’s brown and black, she has a standard black saddle bag on her and she has white underneath,” Spangler said during a Friday appearance on WAJR’s ‘Talk of the Town.’ “At the time she got loose she was wearing a purple collar with white stitching and it has a Laramie County, Colorado rabies tag attached.”

Spangler said there were several sightings of Heidi on a Route 43 overpass the same day she went missing but the last sighting was last Tuesday, May 24.

Spangler said the sightings have been in a general area.

“The West Virginia-Pennsylvania border and going down into the vicinity of Seghi’s Five Lakes,” Spangler said. “That seems to be the circle where anybody has seen and reported her.”

“In the rain she’s bedding down, she doesn’t like the rain,” Spangler said. “So, people need to look in their barns, in garages and under porches she’s got to be there somewhere.”

Spangler asks anyone that finds a dog they think might be Heidi to take steps to verify who the owner of the dog is.

Spangler is staying in Morgantown at the Motel 6 while the search continues.

A GoFundMe account has been created to help Spangler defray costs.