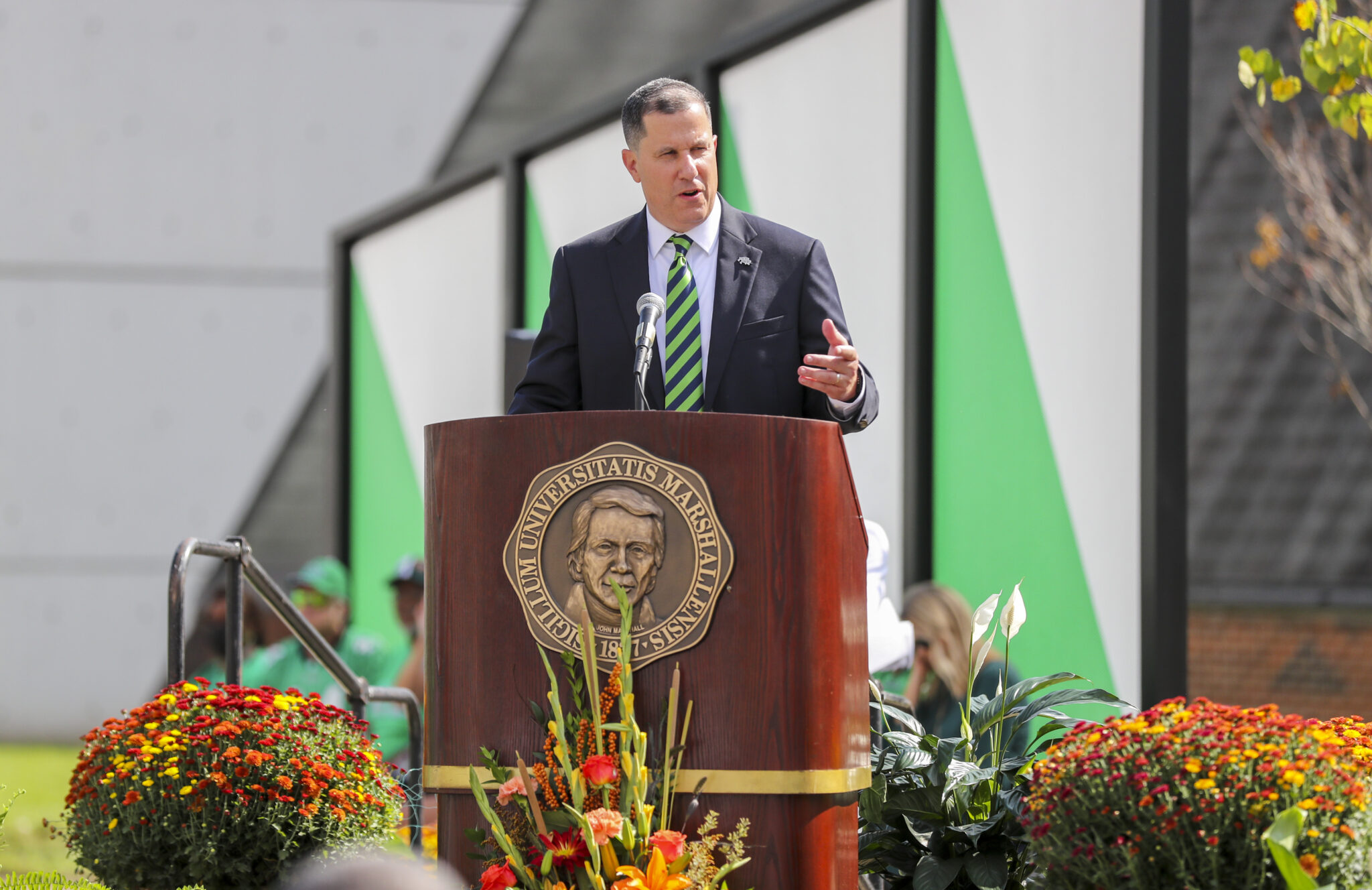 Then-Marshall interim athletic director Jeff O'Malley speaks during a ceremony honoring the life of Harold Everett ÒHalÓ Greer and to reveal a statue of him outside the Cam Henderson Center. Mandatory Credit: Ben Queen-USA TODAY Sports

HUNTINGTON, W.Va. — One of the longest-serving members of Marshall University’s athletic department is leaving Huntington for a new and major career opportunity.

Jeff O’Malley, who has served as MU’s Associate Athletic Director and Chief of Staff for more than two decades, has been named as the Director of Athletics at Lamar University in Beaumont, Texas.

Lamar is currently a member of the Western Athletic Conference, although it will move to the Southland Conference on July 1, 2023.

O’Malley will begin working at Lamar on July 1.

“I am very excited to have the opportunity to lead Lamar University Athletics. This is a program with a proud tradition of excellence, and we will do all we can to make it even better both in the classroom and in competition,” O’Malley said. “I met many great people through this process, and I would like to thank Dean Spina and Don Shaver for their work co-chairing the search committee. I also would like to thank President Taylor for providing me with the opportunity to work with him again and share his vision for Lamar University. I am looking forward to meeting our student-athletes, collaborating with the campus community and working with our coaches and staff to provide a first-class student-athlete experience.”

Taylor is looking forward to again working with O’Malley.

“Jeff O’Malley is a trusted collaborator who understands it takes all facets of a university to support student-athletes,” Taylor said. “He established very positive relationships with faculty and with academic affairs at Marshall University and has an absolutely stellar reputation for ensuring student-athletes are successful in the classroom as well as on the field of play.”

O’Malley came to Marshall in July 2002 from the University of Massachusetts Amherst to work under then-Marshall Athletic Director Bob “Kayo” Marcum. O’Malley then worked under Marcum’s replacement, Mike Hamrick, assuming responsibilities for several sports, including men’s basketball and men’s soccer.

O’Malley was one of the finalists for the Marshall Athletic Directors job when Christian Spears was hired for the position this past February.

Hamrick was happy to discover O’Malley’s move to Lamar.

“I am very excited not only for Jeff, but for Lamar University. He is an outstanding college administrator and he was very instrumental in all the athletic success we had here at Marshall University,” Hamrick said. “We won a lot of championships, we built a lot of facilities and most importantly, we graduated a lot of student-athletes and Mr. O’Malley was a big part of that. I have no doubt he will bring a vision to Lamar University that will enhance and take your intercollegiate athletic program to a high level.”

In August 2021, O’Malley was also named NCAA Secretary Rules Editor for Men’s Basketball. This is a role he will begin Sept. 1 in addition to his duties as Athletic Director at Lamar.