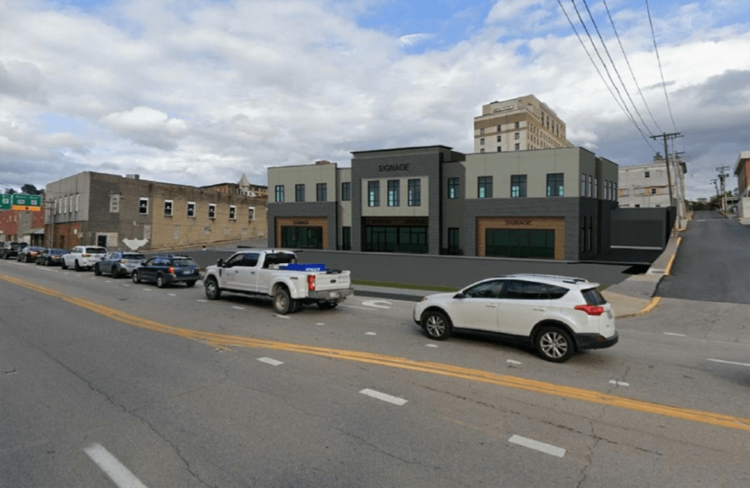 The Deck in Morgantown. (Photo courtesy The Dominion Post)

MORGANTOWN, W.Va. — A gun store is on the verge of opening in downtown Morgantown but a community group is passing around a petition in hopes of keeping it from happening.

Protect Morgantown wants to stop Big Daddy Guns from opening its doors at the foot of the Westover Bridge.

The company has successfully navigated the city’s permit process, but must still apply for a business license from the city.

Members of Protect Morgantown cited recent mass shootings and the location of the store in comments to Morgantown City Council this week. The Deck, the building that will house the gun store and a Starbucks, is about a half-mile from Morgantown High School, near the WVU campus and across the street from the Hazel Ruby McQuain Amphitheatre.

“Given our country’s mass shooting epidemic a bright orange sign reading “Big Daddy Guns” isn’t exactly the way we want to welcome anyone into to town,” Hollingshead said. “Tourists, WVU parents and students or potential new businesses- it’s going to be a huge deterrent.”

According to company spokesman Nick Lahera, along with guns, ammo and accessories, Big Daddy Guns also offers training, some on location training, education and Concealed, Carry Permit courses. The company has at least six locations in the southern United States with plans to open more.

The platform is an online subscription-based service, but brick and mortar locations do not require membership.

“Our mission statement is very simple- To educate, motivate and activate Americans about and for the Second Amendment,” Lahera said.

The idea was developed in 2012 by Sherrie and Tony McKnight. The McKnights sought out to change the gun retail experience by having open, welcoming locations with knowledgeable associates rather than some of the dark rural locations in the past. By 2015, the McKnights opened the first full-service gun store in Gainesville, Florida- the home of the University of Florida. Lahera said the stores are welcoming and workers encourage people educate themselves before deciding on a firearm to purchase.

Co-founder Sherrie McKnight attended the meeting and explained knives and other means of homicide account for more crime in the country than caused by guns. McKnight also cited the Morgantown commitment to inclusivity and hoped city officials would welcome them to the community to serve the needs of gun owners.

“Even one life lost is too many in an unjustified circumstance,” McKnight said. “If you’re perceived threat from Big Daddy Guns we should at least be clear on the facts and understand the root causes of violent crime.”

Lahera said the company hopes to change the perception of gun stores with their approach and location.

“What Tony always says is he wants them in the center of town because it breaks down the stigma that comes with firearms,” Lahera said.

There are a number of other licensed gun dealers in Morgantown.