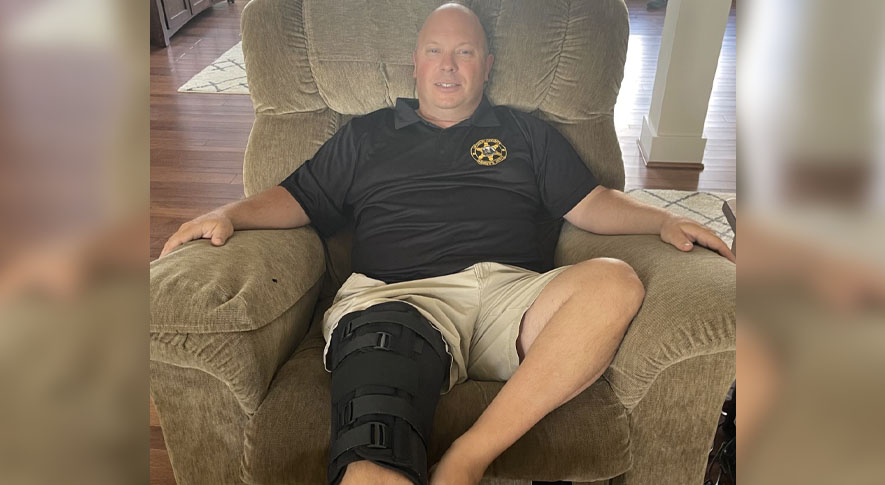 Upshur County Chief Deputy Mike Coffman taking it easy a week after he was shot in the line of duty.

BUCKHANNON, W.Va. — A deputy wounded in the line of duty last week said he’s on the mend.

Mike Coffman, chief deputy of the Upshur County Sheriff’s Department, took a round to the leg when he joined the response to a call on I-79 last Thursday where a shooter had stopped in the middle of of the northbound lane at Weston and started firing shots.

“I’m getting stronger and better every day. It’s been a week now and I can definitely tell a difference for the best. I just feel blessed that it wasn’t any worse than it was,” Coffman told MetroNews.


He and Upshur County Sheriff Virgil Miller responded to the incident at the request of Lewis County Sheriff Dave Gosa and Gosa’s chief deputy after the pair had arrived on scene. The suspect, Matthew Brevosky, started shooting from a position in the middle of the interstate where he had blocked traffic.

Coffman and Miller arrived in short order and began to stop traffic on the interstate. Coffman said Sheriff Miller headed north of the scene to stop the southbound traffic and he headed south to stop the northbound motorists and to get those who were already stopped out of harm’s way.

“I had actually moved a couple of cars away and got some tractor trailer drivers who were out of their vehicle to safety. I was actually headed back to my car to get my long rifle out of trunk to go and help the other officers when I was hit,” he said.

Coffman was about 100 yards down range from Brevosky’s position. Other officers were about 75 yards away taking cover behind vehicles and tractor trailers. When Coffman radioed he had been hit, Gosa and Buckhannon fireman Derek Long moved to his position.

“He (Long) was one of the initial ones on scene. He thought it originally was a wreck and was trying to stop traffic and radioing in updates. He got there about the same time as Sheriff Gosa. He jumped into the driver seat and Sheriff Gosa assisted me into the back and he actually drove me to the hospital,” Coffman explained.

Initially the plan was to get to the bottom of the exit ramp and meet the ambulance since it was too dangerous for the ambulance to come up on the highway. However, since they were already moving, Coffman made the call for Long to just keep driving and take him straight on to Stonewall Jackson Hospital.

The investigation is ongoing and state police have revealed very little about their findings in the probe. The most asked question is what may have prompted Brevosky’s actions. Coffman isn’t involved in the investigation and couldn’t comment on it, but he did say it was one of the most bizarre and dangerous incidents he’s rolled into in his position as a lawman.

“It’s not only one of the most dangerous things you can encounter, but it’s also the most bizarre for someone just to pull their vehicle sideways and start shooting on I-79. There are a lot of unanswered questions they are still working on in the investigation,” he said.

As for when he’ll be back on duty, Coffman couldn’t say.

“I’ve been trying to press them on that, but they tell me we’re just taking it week to week, but I am getting better and things are looking good. It could have been a whole lot worse,” he said.