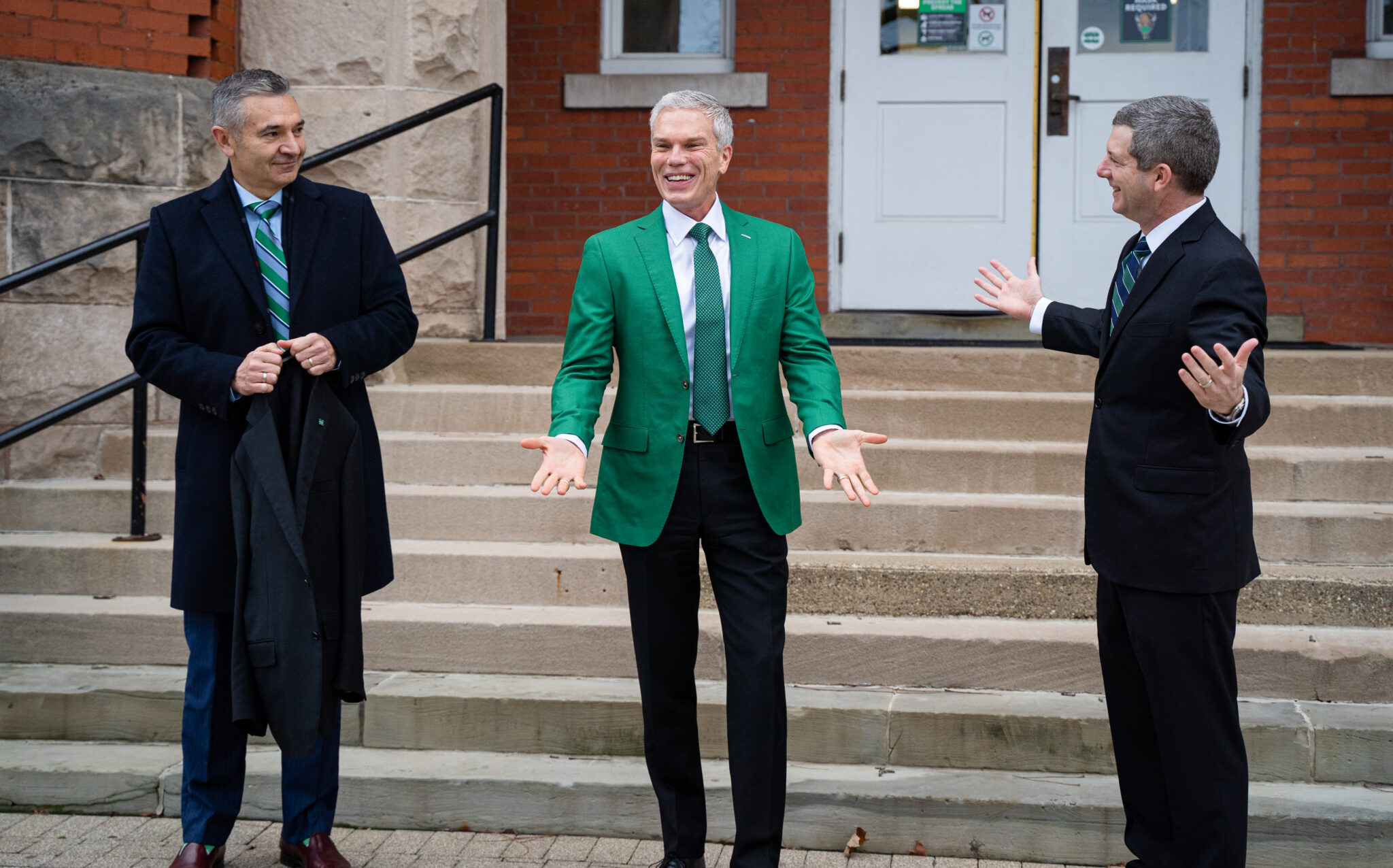 Marshall President Brad Smith puts on a Kelly green jacket during his first day at the position. (Photo by Austin O'Connor)

Marshall’s long-awaited baseball stadium is coming in the near future, and to a different location than what was originally planned.

On Friday morning, the Marshall University Board of Governors unanimously approved the capital program statement, a revised baseball stadium project presented during a special meeting.

The new baseball stadium will be built along a parcel of land at 2nd Avenue and 22nd Street, adjacent to the softball program’s Dot Hicks Field. The baseball stadium had originally been slated for property on 5th Avenue, but the new site was chosen as it allows for the stadium to be developed at a lower cost and with an accelerated time for completion.

The goal is for the $20 million facility to be built in 15 months when construction begins and be ready for the 2024 college baseball season.

“Marshall is ready to see this long-anticipated ball field come to fruition,” MU President Brad D. Smith said in a school release. “Our partners, including the City of Huntington, are ready. Our intention to build this ballpark has never wavered and while we encountered a major hurdle in the COVID pandemic, it’s never dampened our enthusiasm to see this project to its completion.”

The property on 5th Avenue and 24th Street will remain for potential future development opportunities in the community. The university had purchased that site three years ago from the Huntington Municipal Development Authority in hopes of having the baseball team begin playing the 2022 season at a state-of-the-art 3,000 seat facility.

While it’s been more than two years since a groundbreaking ceremony was held for the stadium, those hopes were altered and slowed by the COVID-19 pandemic and early bids for construction that came in beyond the planned project budget.

“The Board of Governors continues to be supportive and steadfast in its commitment to have a baseball stadium on the campus of Marshall University,” said Chris Miller, the Board of Governors Athletics Committee Chair. “Too many times we have heard, ‘I will believe it when I see it’ and we are all eager to hear the sound of equipment moving dirt to begin construction of our new baseball facility.”

Marshall will begin the request for proposal process in the near future to identify a development partner. The goal is for a final selection to come in October to begin moving dirt.

Fundraising for the stadium continues through the Herd Rises Campaign and donations can be given by texting GOHERD to 801801, calling the Big Green at 304-696-4661 or online at herdrises.com.

“This is why this university and community are so special,” Marshall Athletic Director Christian Spears said. “We don’t back down, we don’t quit. We partner, we collaborate, we include, we find a way, we believe … and here WE ARE, ready to move forward with a new location, timeline, budget, and plan. Many have questioned, many have demanded and now we need many to give … I am just so grateful to this community because I know they will.”