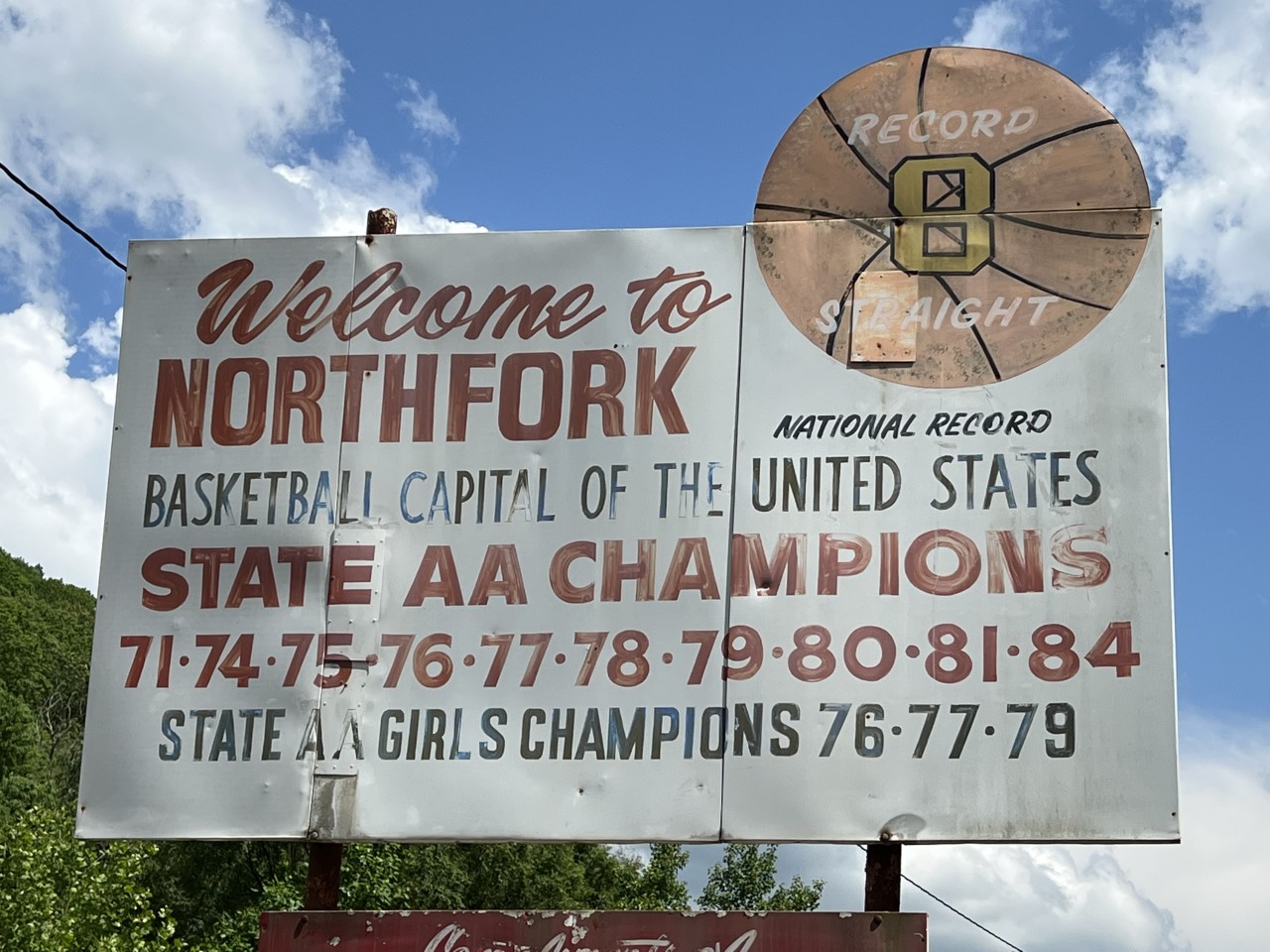 NORTHFORK, W.Va. — Route 52 takes you through old, southern West Virginia coal towns where basketball was once not only a dominant sport, but a way of life for many.

You pass Williamson and Welch, but no area or school has been more famous for basketball than Northfork, which is located between Welch and Bluefield in McDowell County.

Whether you enter from east or west, a sign reads, “Welcome to Northfork: Basketball Capital of the United States.” The welcome sign sheds light on what was once the town vibe, but these days, many of the courts in town are vacant.

The Northfork Blue Demons were the state’s top team throughout the 1970s. The Blue Demons won seven of 10 Class AA state titles during that decade, including a run of eight straight into the early 1980s.

Russel Todd, a two-time Class AA first-team all-state selection at Northfork, was a first-hand witness to basketball’s rise in his small coal town while growing up. Todd went on to win three straight Class AA state titles with the Blue Demons.

“It was unbelievable,” Todd said. “It is hard to describe because you almost have to be a part of it. There was basketball, and that was it. Everything was the Blue Demons. The questions always were ‘when are they playing? ‘When are they in town? ‘Where are they going next?’ There was always a following wherever we went.”

“It was crazy to see a small school that I played at having such a big following, and these were not just our people but the older people as well,” Todd continued. “Everybody around knew who you were.”

Ron Spencer, a three-year starter and two-time Class AA all-state selection, hardly lost during his prep career, but believes a defeat to Matoaka his junior year served as the foundation for the 1971 team’s success.

“Coach [Jennings] Boyd took us five starters in me, David McDaniel, Bruce Hanson, Herbert Walker, and John Cox, to scout a game between Matoaka and Whitewood,” Spencer recalled. “Matoaka had a lousy game that night, and we thought we would cruise right over the top of them. They went on and beat us that season.

“We never scouted another team following that. We never touched a basketball when we returned a day or two later. We ran suicides and figure eights without a basketball. That set the tone for us not to let our guard down.”

Northfork’s 1971 championship season was Spencer’s senior campaign. The team’s only loss came to Gary High School, which was the last home loss by the Blue Demons under Boyd until his retirement in 1981.

The Blue Demons won their first four postseason games, including a 14-point victory over Magnolia in the state semifinals that set up a date with Gauley Bridge in the final.

Gauley Bridge went into the break with a 13-point lead that ultimately reached 17, before Northfork flipped the script. The Blue Demons captured the Class AA title, 63-56.

“They were all gloating and happy, but we took that as inspiration,” Spencer stated. “I will never forget that we came out charged up and claimed our first state title.”

Northfork would miss the next two state tournaments by losing to eventual state champions Mullens and Gary in the regional and sectional finals.

However, the Blue Demons returned in 1974 and won six of their postseason games by an average of 29 points. Northfork took down Vinson, 76-58, in the Class AA state final.

That victory started the nation’s longest championship streak of eight from 1974-81. That streak, however, ended in 1982 at the expense of Greenbrier West in the Region 3 final, 58-46.

While the town celebrated title after title in the 70s, Northfork’s population was slowly dwindling. According to the U.S. Census, the city had a population of 737 in 1970, which decreased 10 percent to 660 residents in 1980.

Spencer’s father worked at the Landgraff mine while he was growing up, but when he got to high school his father created his own coal trucking company. Spencer and his teammates served as his dad’s laborers.

“We’d have a basketball game no matter what night it was, and sometimes he needed us to go unload a truck load of coal at five o’clock before the game with tip-off at 7:30,” Spencer said. “It was not uncommon for us to go out there and unload a truckload of coal before we even played basketball on game night.”

Spencer still saw strong support from his town and community in high school. Local boosters and Northfork fans helped to do their part to send the team to the state tournament.

“We stood out there in the street at the red light and raised money because we didn’t have enough to go up to Morgantown,” Spencer stated. “People had all kinds of fundraisers. We stood at the traffic light and had a bucket, and people would come by and make donations. Even some of the merchants that owned restaurants down from high school.”

Coach Boyd’s name continues to resonate whenever people discuss Northfork. Boyd spent 15 seasons at the head coaching helm from 1966-1981. He finished with a 307-62 overall record, including a 102-5 record at home.

Boyd impacted numerous lives on and off the court, not only as a coach but as a math teacher.

“I had heard about all the rules Coach Boyd had from my brother, who played for him,” Todd said. “He taught us that if we wanted to be successful, then we had to sacrifice certain things in our lives, and it took a lot to do that, especially being a young kid.

“He gave us a curfew, and we had to distance ourselves from girls.”

“His demeanor and personality were flexible,” added Gary Dove, a long-time statistician for Boyd and unofficial historian of Northfork basketball. “When the kids did what they did most of the time, he was easygoing and personable. If he thought the kids weren’t giving 100 percent, he was not averse to stomping his foot and letting them know that wasn’t acceptable for the means of playing basketball.”

The Blue Demons’ streak of eight consecutive state titles being the national mark was snapped in 1991 by St. Anthony in New Jersey, which claimed its ninth straight championship that year.

Northfork went 179-30 in those eight years, including an undefeated season in 1975. The ’75 squad was voted the top team in the state regardless of classification.

In 1985, Northfork High School consolidated with Mount View High School, but it remained a middle school until 2001. Population has only continued to dwindle in Northfork in the decades since, with the U.S. Census showing 519 residents in 2000, 429 in 2010 and most recently 231 in 2020.

The school was torn down in 2020 due to flood damages. The demolition took the structure, but the Northfork Blue Demons’ legacy lives forever.