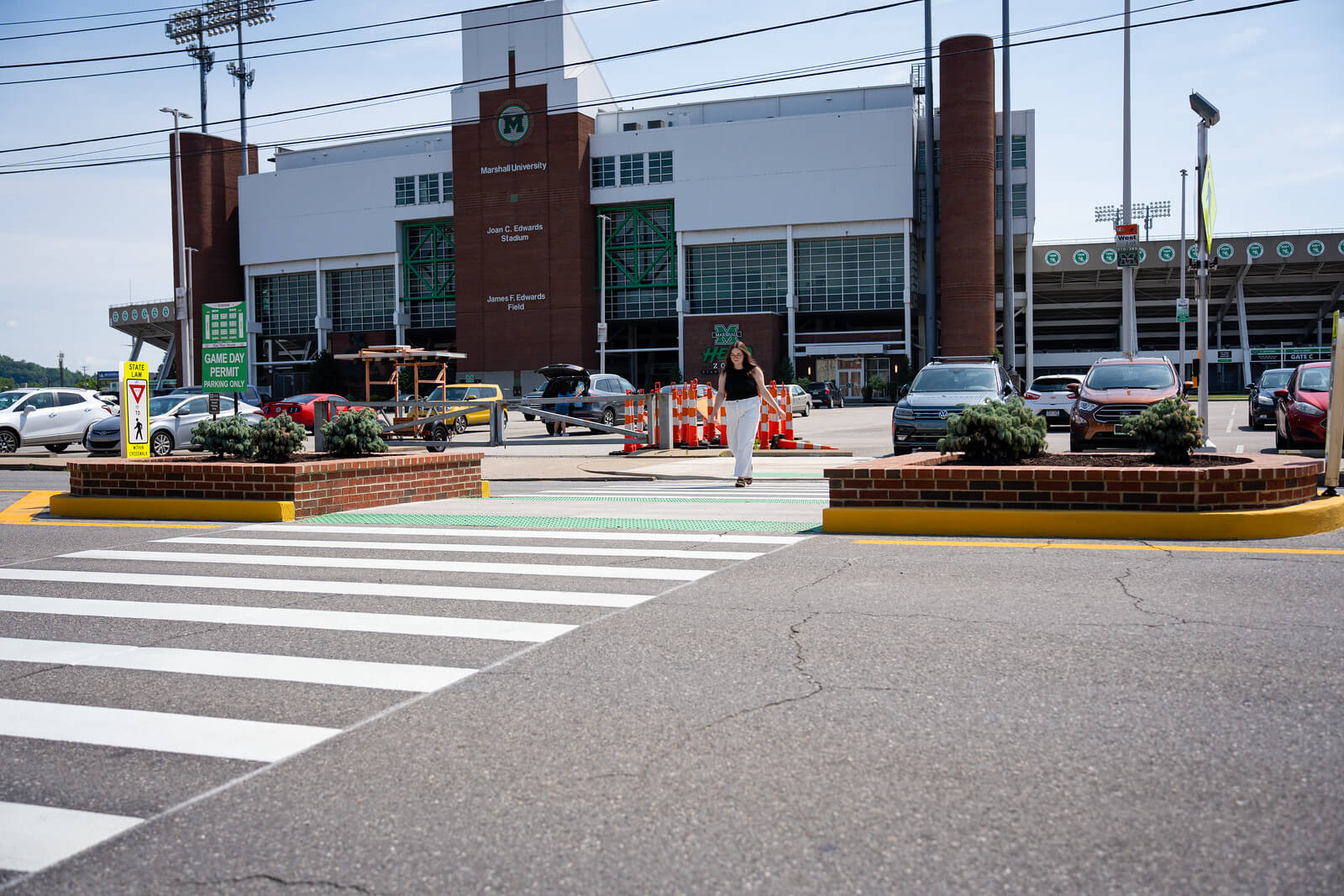 Pictured is the new crosswalk as part of a plan announced by Marshall, WV DOT and Huntington to calm traffic and enhance pedestrian safety. (Photo by Marshall)

HUNTINGTON, W.Va. — Marshall University, the City of Huntington and West Virginia Department of Transportation have announced plans intended to calm traffic and enhance pedestrian safety on major thoroughfares near Marshall University’s campus and in downtown Huntington.

In a joint news release Tuesday, the three parties announced that West Virginia Department of Transportation (DOT) has issued a temporary order reducing the speed limit to 25 mph from 35 mph on 3rd and 5th avenues between 6th and 20th streets. Speed limit signage modifications in the affected areas will begin this week.

The City of Huntington has also completed a new crosswalk on 20th Street between 3rd and 5th Avenues that road officials say will make it safer for pedestrians crossing the street to access the Marshall University Recreation Center or Joan C. Edwards Stadium. Additionally, Marshall University will launch a public awareness campaign about pedestrian safety for students, faculty and staff beginning with the fall 2022 semester.

These steps taken come on the heels of a fatal pedestrian accident in November 2021 in which a Marshall University student was struck and killed by an oncoming vehicle in the 1800 block of 3rd Avenue.

“This has been a collective effort from the city, Division of Highways and Marshall University to look at any and all steps to calm traffic and enhance pedestrian safety on major thoroughfares fares near Marshall’s campus and in downtown,” City of Huntington spokesperson Bryan Chambers told MetroNews.

In the days following the student’s death, Huntington Mayor Steve Williams officially requested that the West Virginia Division of Highways conduct a traffic safety audit on the roadways surrounding Marshall’s campus in Huntington with a special emphasis on the 3rd and 5th Avenue corridors.

The Division of Highways began the traffic safety audit this Spring and will start the second phase of the audit in September. It is expected to be completed by the end of this calendar year, a release stated.

Chambers told MetroNews that the audit includes an analysis of all crash data historically in that area and a review of traffic signage and markings in roadways. He said it will also include on-site observations and a comprehensive review of how vehicle, pedestrian and bicycle safety could be improved.

Williams said of the DOT temporary order, “Marshall University President Brad D. Smith and I share the same vision of enhancing safety surrounding Marshall’s Huntington campus in every regard. I am pleased to see that the West Virginia Division of Highways has ordered a temporary speed reduction on 3rd and 5th Avenues as it continues to analyze potential long-term solutions in its traffic safety audit.

“The Huntington and Marshall University police departments will work collectively to enforce this new speed limit in the affected areas, and my administration will take proactive measures to alert the public to this change.”

Cindy Cramer, PE, with the West Virginia Department of Highways, Traffic Engineering Division said in a release, “We are pleased to be part of the multi-disciplinary team to review highway safety around the Marshall University campus area of Huntington. The best solutions are derived from a comprehensive approach with all partners working together from the various perspectives of engineering, education, and enforcement. The Division of Highways is committed to implementing countermeasures that will improve overall safety for all users.”

Marshall University formed a Pedestrian Safety Task Force that began meeting in January with the goal of identifying short-term solutions that can improve the safety of pedestrians in and around the university’s Huntington campus. In late winter, the task force recommended two items to Smith – reduce the speed limit around campus and deploy a public awareness campaign for pedestrian safety.

“The safety of our students, faculty and staff is Marshall’s highest priority and I am encouraged with the news of the speed reduction around campus,” Smith said. “As we wait for the traffic safety audit to be completed, this temporary speed reduction, the new crosswalk on 20th Street and our upcoming educational campaign on campus will add tools for keeping everyone as safe as possible.”

The City of Huntington’s Public Works and Planning and Development departments also coordinated with Marshall’s administrators, public safety officials and the Marshall University Recreation Center to build the 20th Street crosswalk with a median that includes a safe area for pedestrians to stand while crossing the roadway, a release stated.

Pedestrian push buttons on each side of the crosswalk trigger beacon lights that flash when the buttons are pressed to alert motorists in both lanes of traffic that pedestrians are preparing to enter the crosswalk. The crosswalk also includes signage alerting motorists to yield to pedestrians.

Williams proposed and Huntington City Council approved the project, which cost $151,906. It was designed by E.L. Robinson Engineering and was constructed by Neighborgall Construction Co.