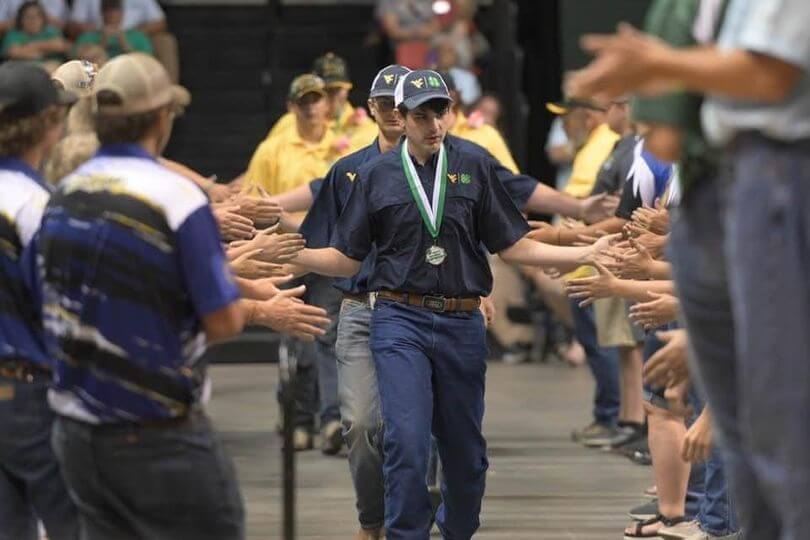 Hutson, who started participating in the shooting sports program at the age of nine, said it was special representing West Virginia 4-H on a national stage.

“The national shooting sports championship was super fun, and it was great to meet people from all over the country,” he said. “Our team faced tough competition, and we performed really well. To come home with a second-place finish our first time competing in the muzzleloader event is pretty special. I’m super proud of all our teammates, including Justin Mace who picked up a great win in archery. It was an honor for us to represent West Virginia 4-H.”

The focus of all WVU Extension 4-H programming is the development of youths as individuals and as responsible and productive citizens. The National 4-H Shooting Sports Program stands out as an example in which youth learn marksmanship, the safe and responsible use of firearms, the principles of hunting and archery, and much more.

The national competition, hosted by Nebraska 4-H, had more than 700 4-H’ers from across the country competing in nine different disciplines. Thirteen West Virginia 4-H members traveled to the championship to participate in four disciplines at the national event.

“Muzzleloading is an important part of our Appalachian heritage, and it’s a great way to promote safe firearm use among 4-H youths. But our 4-H Shooting Sports program is so much more. I cannot begin to describe the responsibility, decision-making skills, teamwork and integrity these young men have exhibited,” WVU Extension Clay County Agent and Shooting Sports Instructor Michael Shamblin, who coached the muzzleloader team, said. “They have represented us all in the most positive way.”

Shamblin also noted this was the first time West Virginia has participated in the National 4-H muzzleloading discipline, and it’s taken a community of caring adults to make it happen. In addition to the 4-H instructors, the team’s practices were supported by the West Virginia Muzzleloaders Association.

Outdoors
A return to Canada provides epic experience for W.Va. angler
Nitro attorney Harvey Peyton has been fishing in the same spot in Labrador for 20 years, but two year layoff for Covid created an amazing change in the Canadian fishery.
By Chris Lawrence
Outdoors
Fishing and small game regulations highlight Natural Resources Commission meeting
Commissioners make quick work of small game and fishing regulations in third meeting of the year.
By Chris Lawrence
Outdoors
WV Natural Resources Police celebrate 125 years of service
It all started with the Governor's appointment of one man, in 1897. Captain E.F. Smith had a gun and a horse and traveled the entire state enforcing game laws to protect the state's wildlife resources.
By Chris Lawrence
Outdoors
Illegal pet trade creates major threat to some W.Va. wildlife
Critters like box turtles and snakes from the hills of West Virginia are drawing big money in the foreign pet trade and poachers are starting to impact West Virginia's wildlife with illegal capture and collection
By Chris Lawrence
View AllHoppy's Commentary