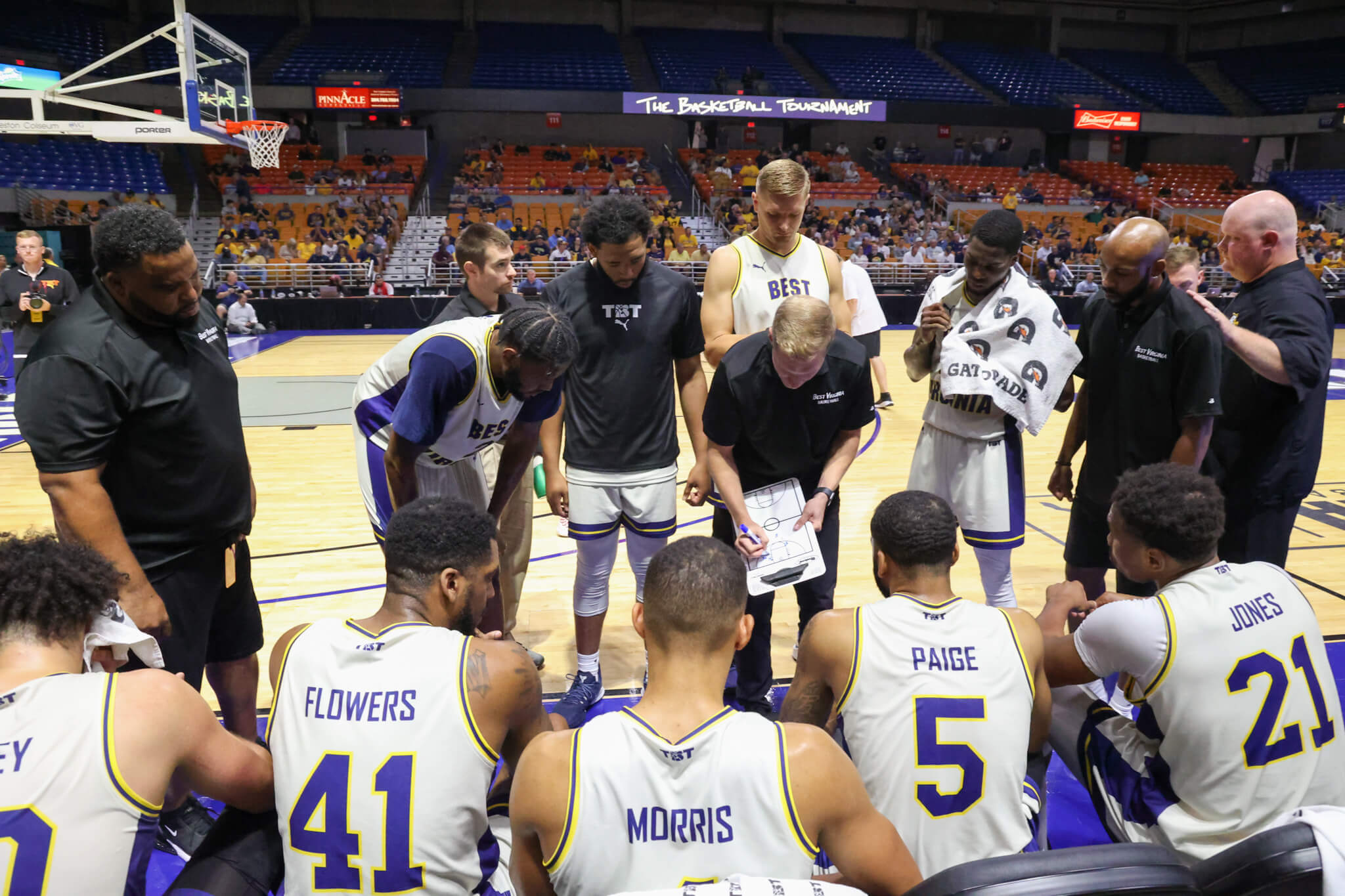 After enjoying the friendly confines of the Charleston Coliseum en route to a regional championship, Best Virginia will see how it measures up on the road Friday against Red Scare, a Dayton-based alumni team. The 9 p.m. contest at University of Dayton Arena will be televised by ESPN and marks the second of the day’s two quarterfinal round games to decide the fourth semifinalist in The Basketball Tournament.

“It’s going to be an away game and it’s going to be a great environment,” Best Virginia coach James Long said. “It’s a quick turnaround, but we do have a little bit of time. We played three tough games in a quick stretch and we traveled [Thursday] over here. A little time away from each other and a little time to rest is a good thing. We don’t need to press with information, because there’s not as much that’s going to change game to game as you’d think.”

The contest will also be available on the MetroNews radio network with a live stream at wvmetronews.com. Select affiliate stations across the state will carry the game live.

A game-winning turnaround basket from Kevin Jones allowed Best Virginia to prevail 63-62 against Bucketneers on Wednesday in the regional title game.

“The way we blended so well in such a short amount of time,” Jones said, “it’s extra special.“

Around the same time, Red Scare was in the process of pulling out an 83-81 win over The Money Team on Josh Cunningham’s game-sealing bucket.

The No. 3 seed in the Dayton Regional, Red Scare opened TBT with a 75-70 victory against Cititeam, before knocking off Marquette’s Golden Eagles squad, 62-56.

“We have to move the ball,” Long said. “They’re as connected a defensive team as there is in TBT. A lot of the guys played together on some of the best Dayton teams in recent years. We have to focus in on executing. When you’re on the road, if you’re sloppy, you’re in trouble, because they’re going to have so many opportunities through the game that the crowd is behind them and the momentum is behind them.”

In the most recent win over The Money Team, Red Scare was led by 6-foot-5 guard Darrell Davis, who scored 18 points and made all but one of his seven field-goal attempts. Guard Scoochie Smith added 15 points, while Jordan Sibert and Vee Sanford added 12 apiece, with the latter matching Davis’ 6 of 7 shooting output.

“The coaching staff was up pretty late Wednesday night watching film and then watching film on the way here,” Long said. “We know the direction we want to go with a couple of things. We’re just trying to whittle down the information to enough, but not too much for the team.”

Jones has led Best Virginia in scoring each of its TBT victories, with the first coming in lopsided fashion 75-45 against Virginia Dream, before an 89-79 win over Herd That. which who has led the team in scoring in each of its three games.

Yet a balanced attack has been instrumental to the team’s success, and it’s included steady play from forward John Flowers and guards Jermaine Haley and Jamel Morris that has Best Virginia on the brink of playing in a Saturday semifinal.

Long knows nothing will come easy against defensive-minded Red Scare, though Best Virginia will look to make things equally, if not more challenging on the home team.

“They really make runs happen from the defensive end. We have to get some movement, rebound the ball and keep being us,” Long said. “We’re one of the best defensive teams in TBT if we can learn to finish possessions. The opportunity is still there. This is only the fourth game. Hopefully we can play six and we just have to keep getting better each time.”

While Jones, Flowers and Morris have a wealth of past TBT experience, Haley is a new addition. His play on both ends has provided a big lift to Best Virginia, and no shortage of savviness has been on display, including the assist to Jones on the game-winning basket against Bucketneers.

“Jermaine is one of the more underrated guys I’ve been around,” Long said. “He’s such a good basketball player and he can do everything. You watch Jermaine’s eyes before he catches the ball and they’re on Kevin. He just zips it in there. No disrespect to anyone else, but I don’t know if anyone else makes that play. We have some really good passers, but that pass was incredible in the moment.”

The winner of Friday’s second quarterfinal will face the winner of an earlier one between Blue Collar and Heartfire in a semifinal at 4 p.m. Saturday.