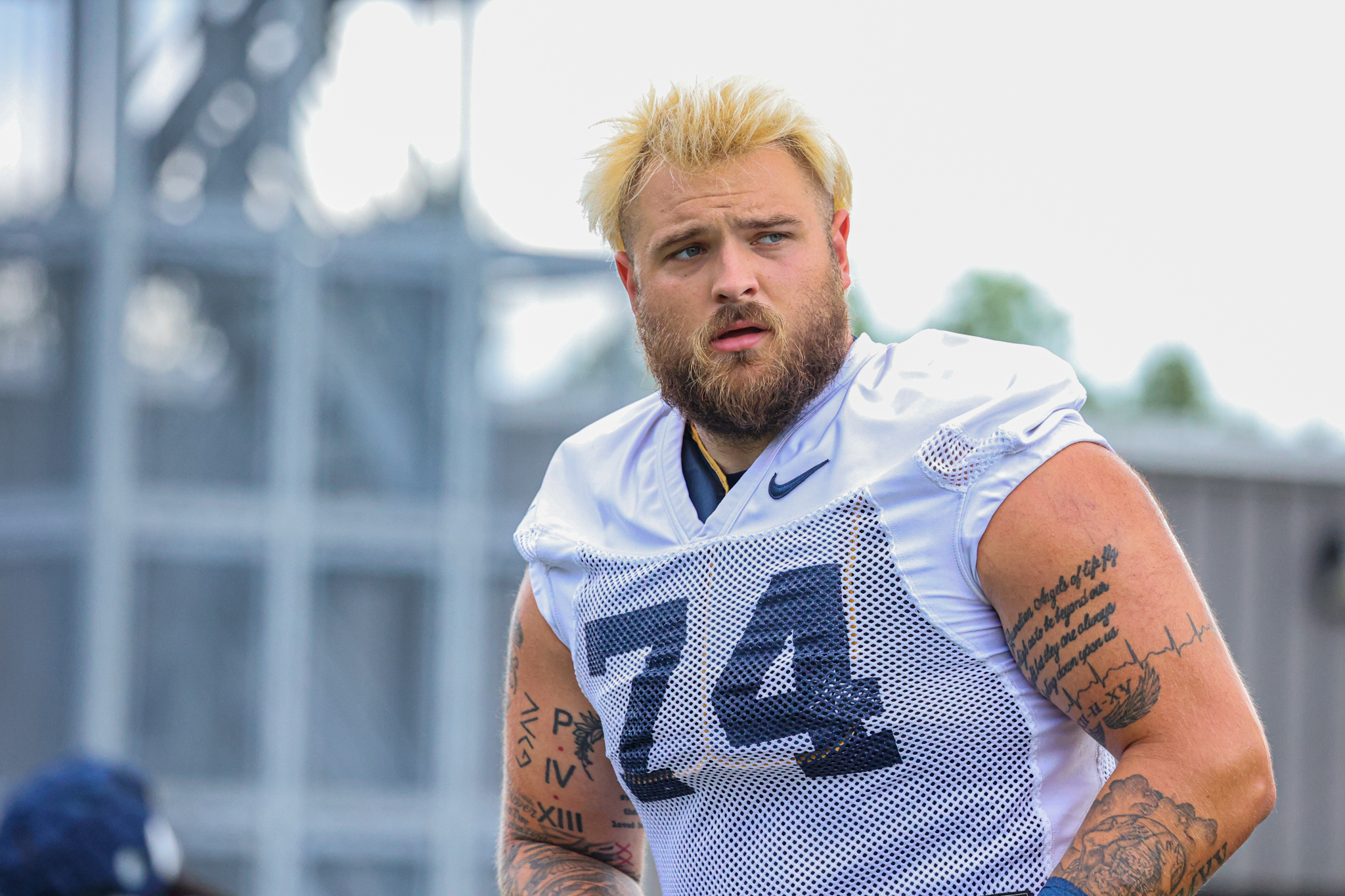 Playing at 15 pounds heavier than what he was a year ago, Gmiter accomplished his main priority in the offseason in preparation for his redshirt junior campaign.

“As you get older, you learn how to take care of your body and what your body needs,” Gmiter said. “The biggest thing I really tried to focus on over the offseason is putting on some weight. This is the first camp that I’ve gone into over 300 pounds.

“Last year, the heaviest I played at was 298 and the year before that was 295 to 298. Right now, I’m at 313. The biggest thing was putting on some extra pounds. They give you an advantage in the run and pass game.”

One of five returning starters up front for the Mountaineers, Gmiter is entering his fifth season of college football, though he’s only exhausted half of his playing eligibility thanks to a redshirt season in 2018 and getting back a free year of eligibility in 2020 as a result of COVID-19.

Yet even for a player that’s started 25 games since 2019, including all 13 last year, Gmiter has never felt better since putting an extra emphasis on his stature over the last seven months.

“I’m the fastest I’ve been in a while, too,” Gmiter said. “I put on weight, but I also increased speed and strength. I can feel a difference so far in practice.”

Not long after West Virginia’s loss to Minnesota in the Guaranteed Rate Bowl concluded the 2021 season, Gmiter got with Mike Joseph, WVU’s Head Coach for Strength and Conditioning, and Haley Bishop, Director of Sports Nutrition, to develop a plan for how to add weight.

“I had a hard time keeping it on the past two years,” Gmiter said.

Gmiter, a native of Bethel Park, Pa., closely followed a diet plan throughout what remained of winter into spring and summer to get well above 300 pounds.

“I eat probably four times a day and three snacks just to try to keep that weight on,” Gmiter said. “We burn close to 5,000 calories in one practice so I have to find a way to supplement that back into my body and keep it up. Sitting down with them really helped. Mike is one of the best in the country, if not the best. Haley is great with putting plans together and it really showed this offseason.”

When he originally came to Morgantown from Bethel Park High School, Gmiter estimates he was nearly 320 pounds, though he got down to 290 while redshirting in 2018.

“I’ve kind of just been floating there the whole time,” he said. “Now I’m finally up.”

Back to weighing nearly what he did when Gmiter arrived at West Virginia, the advantage of added weight is two-fold.

“Having that extra weight gives you more power and once you get going, it’s harder to stop you and get push back,” he said. “The same thing with the pass game. If you’re getting a bull rush, you can just sit your weight down and you don’t really move. That was my biggest struggle I had. If I got a bull rush, I didn’t have much weight to sit down. I’m about the same weight as a defensive lineman running full speed at me.”

With the Mountaineers four weeks from the September 1 season opener at Pitt, Gmiter is eager to take the field for his first Backyard Brawl.

Having grown up within 15 miles of the Pitt campus, the season opener may hold even more significance to Gmiter, who is hoping WVU can make the most of the highly-anticipated showdown against a nearby rival and the defending Atlantic Coast Conference champion.

“When you open up with a game like that, with the stature that game has, you really can’t waste time,” Gmiter said. “We always talk about urgency in team meetings and we have a countdown that we see every day when we meet. If you waste a second and a rep, that’s a second and a rep that Pitt could have over us. That’s what’s pushing our team to be the best that they can.”

Ahead of his fourth season as West Virginia’s head coach, Neal Brown has talked at length about the need for his team to prove it can move the ball effectively, particularly on the ground, against top-tier defenses.

It’s something the Mountaineers have struggled with in Brown’s tenure, and it came into play last season in losses to the likes of Oklahoma, Baylor, Oklahoma State and Minnesota.