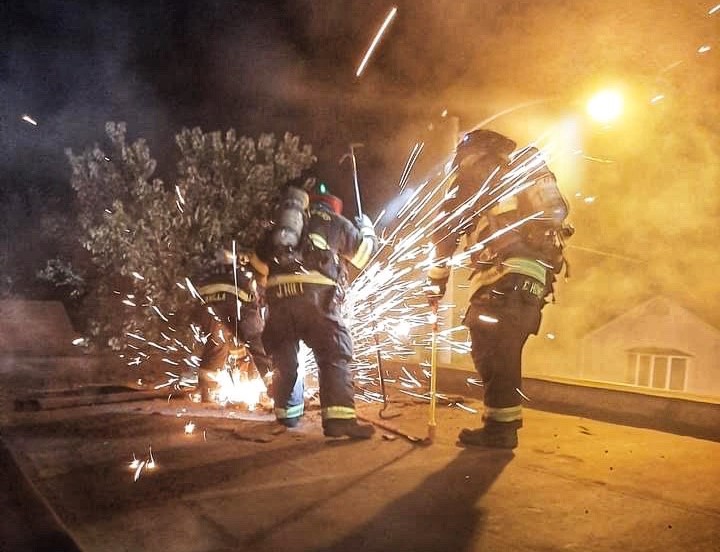 NITRO, W.Va. — Damage is extensive to a well-known business in the Kanawha County town of Nitro after a Thursday night fire.

The blaze was reported around 10:45 p.m. at the Nitro Supermarket.

“They had heavy smoke showing from an office area when we arrived. They were met with heavy fire conditions on the second floor. They were able to contain the fire to that area, but there is smoke damage throughout the building,” said Nitro Fire Chief Casey Mathes.

A cause for the blaze remains under investigation. One section of the building is two stories and the upstairs area is a storage area along with the store’s office space. That’s where most of the fire occurred.

Mathes said there is smoke damage throughout, but it isn’t a total loss.

SAFD was dispatched via automatic aid to Nitro Supermarket for a structure fire. SAFD crews were ordered to open the roof to release hot smoke and heat to make the interior more tenable for suppression crews. C-shift got it done no problem! #stalbanswvfiredept #trainingpaysoff pic.twitter.com/OAISDlD17E

“There’s going to be a loss of a lot of material like produce, fruit, meat, definitely that’s a hot topic, but while it will take them some time go get back, it’s going to be salvageable,” he said.

The store was closed and nobody was in the building at the time. According to Mathes the last person to leave the store left around 9:30 p.m. They’re trying to determine what happened in the hour and 15 minutes between that time and the fire’s detection.