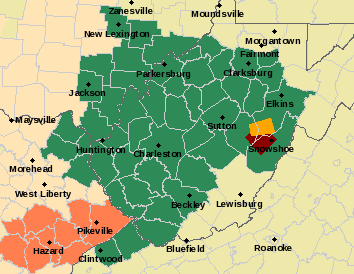 The flood watch covers most of the state. (Graphic/NWS)

CHARLESTON, W.Va. — West Virginia has not escaped the possibility of flash flooding with a cold front moving in early Friday morning that will bring with it a lot of moisture through the weekend.

National Weather Service has placed most counties under a flood watch.

NWS Meteorologist Ray Young said in a normal summer the state could probably handle a weekend of rain in early August but things are different this year after last week’s moisture that put some areas in record territory for July rainfall.

Young said the cold front will enter from the northwest and wash out over the state.

“That’s going to set up a situation where we could have some thunderstorms that produce some very heavy rain,” Young said. “There are some areas in our territory that can’t even take a single thunderstorm.”

Young said the weather system, which will have a boundary near the Parkersburg area, could also create the training of thunderstorms.

“The water in the atmosphere with this system is on the higher side of our normal systems and so with it sitting here and storms continuing to form through the weekend, odds are we are going to have flooding issues in some spots. It’s just a matter of where those storms form,” Young said.

The areas most prone to flooding are those areas that saw streams and creeks come out of their banks in the past week. There were high water events in parts of Cabell, Jackson, Braxton, Boone, Mingo, Logan, Wyoming and McDowell counties. Young said the areas haven’t had enough time to dry out.

The flood watch covers all counties with the exception of those in the Greenbrier Valley, the Potomac Highlands, the Eastern Panhandle and the Northern Panhandle. Monongalia and Preston counties are also not part of the flood watch.

Young said it won’t rain all the time.

“It’s going to be more in the afternoon and evening hours. It’s not something that’s going to cancel all your weekend plans but you need to be aware there could be flooding with those heavy thunderstorms that form,” Young said.

According to Young, it’s very unusual for weather fronts to stall over the state in late July and early August.

“It’s not a usual pattern we get and so it’s set us up in a situation where we’re very vulnerable,” Young said.