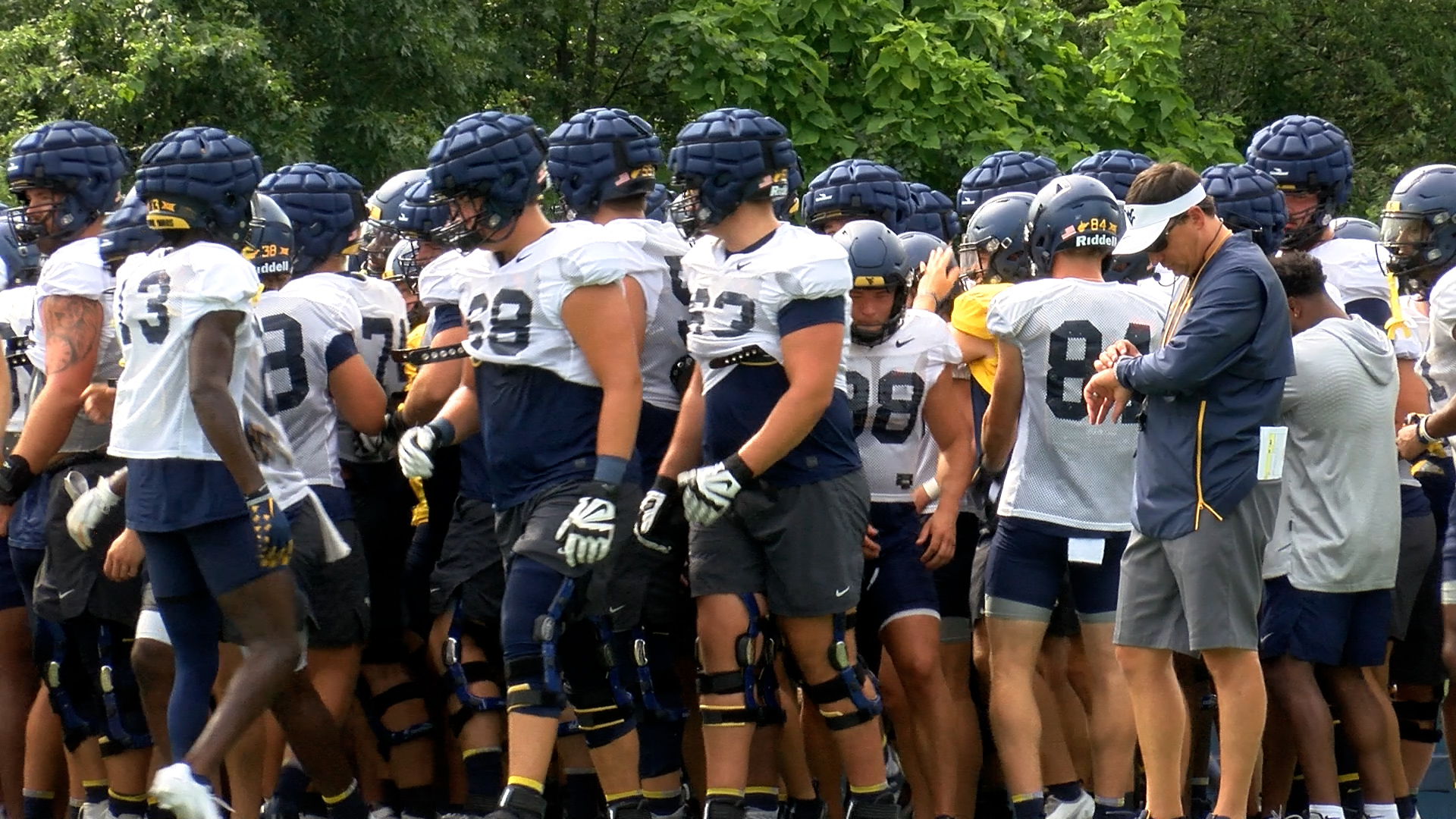 (Sights and sounds from Day 5 of training camp)

MORGANTOWN, W.Va. — Position battles will come into sharper focus starting next week in WVU training camp when full contact practices and scrimmages begin. After a day off on Friday, the Mountaineers returned to the practice field Saturday morning for their final workout before full pads are added on Sunday. The first scrimmage is set for Thursday.

“You drill for skill development and you do team for evaluation. [Sunday] will be the first time in full pads. So we will try to be under control. Monday, there’s a lot of 11-on-11 work. So that will be a big evaluation day. Thursday will be a big evaluation day for us. We’ve got to see. With a lot of newcomers, we have to see how they react in the stadium when the coaches are off the field or in the press box and there’s not somebody giving them pointers every play,” WVU head coach Neal Brown said.

“We need to see when full officiating crews are there and we are full tackle and see how guys can do.”

Following Saturday’s practice, Brown offered updates on how many of the top position battles are taking shape.

With Spring Valley High School graduate Wyatt Milum making the switch from right tackle to left tackle, Brandon Yates and Ja’Quay Hubbard are the top contenders to bookend the right side of an offensive line that has just one starting spot up for grabs. Yates started all thirteen games at left tackle in 2021 and he made eight starts in 2020. Hubbard played in five games last fall after transferring in from Virginia.

“Yates and Hubbard both are more than capable. I have a lot of confidence in them. They have the ability. They’re good. They are good enough to win us games. We just have to be consistent in that. That’s our push on them.

“Our expectations for our offensive line are extremely high this year. This is the first year we go into it, it is probably the first time you have heard me say that we have high expectations for them. That’s from the right tackle, to the center and all the way across. We have certain standards from a work ethic standpoint and certain standards from a production standpoint that are going to be met in that room. Right tackle is no different.”

Although Brown has not announced that JT Daniels will get the start on September 1 at Pittsburgh, every expectation is that the Georgia transfer will get the ball at Acrisure Stadium.

“He has been great in the meeting room. Especially he and Nicco [Marchiol], they have gotten really close. I think that’s a huge positive for Nicco, especially over the summer.”

The pecking order behind Daniels hasn’t been established with three young signal callers vying for the backup spot.

“I thought Nicco threw the ball his best through the five practices. He is growing. The game is starting to slow down. He has a better understanding of some defensive structure. He is more comfortable in the plays than he was in the spring, which is to be expected. He worked hard over the summer.

“Goose [Crowder] has been solid. He missed the first day but he has been out there the last four. He definitely has some growth.

“JT has more experience than all of them. Garrett Greene had a great two-minute drive today to finish practice.”

Oliver Straw arrived from Melbourne, Australia with the hopes of earning the starting spot at punter in his freshman season. However, redshirt sophomore Kolton McGhee has elevated his game early in camp.

“Kolton McGhee has probably been as surprising as anybody in our camp so far. He hit the ball well. This is year four for him. He punted a little bit going back to the COVID year in 2020. He beat [Tyler] Sumpter out for a couple games.

“Oliver had a better day today. But Kolton has really hit the ball well. So I have been pleased with him.”

“I like our specialists. Casey [Legg] and [long snapper] Austin [Brinkman] have been consistent. Parker is really helpful. He is a pickup that not a whole lot of people are talking about. But he could have as big of an impact as any of them — from a field position standpoint.”

Mike O’Laughlin is the longest-tenured veteran in the tight end room, having played in 26 games over the last three seasons. He has returned to practice after suffering a significant knee injury in the TCU game. Now at his third Division I school, Colorado State transfer Brian Polendey has quickly adjusted to the Mountaineer offense.

“Polendey is what we thought he would be when he came in. He has gone above and beyond. He’ll help us. Mike O’Laughlin finished up his [MBA] classes for the summer. So he is back with us full-time. I was encouraged by what he did today. I thought he moved around pretty well.

Treylan [Davis] and Viktor [Wikstrom], those are guys that we need to come on. And they are going to get plenty of opportunities over the next two-and-a-half weeks to show that they are ready.”

Tony Mathis Jr. is established at the top of the running back depth chart. As Leddie Brown’s backup in 2021, Mathis Jr. rushed for 312 yards. Justin Johnson Jr. appears to have an early edge on the No. 2 spot.

“[Mathis Jr.] has never gone into the season at the college level having to be the guy. I think that he is more than capable. So I feel really confident in him. I am really confident in the progress that Justin Johnson has made. There’s some pressure on Jaylen Anderson and [Markquan] Rucker and some of those guys to get ready.”